Made to be Broken: the Karl Meltzer Story 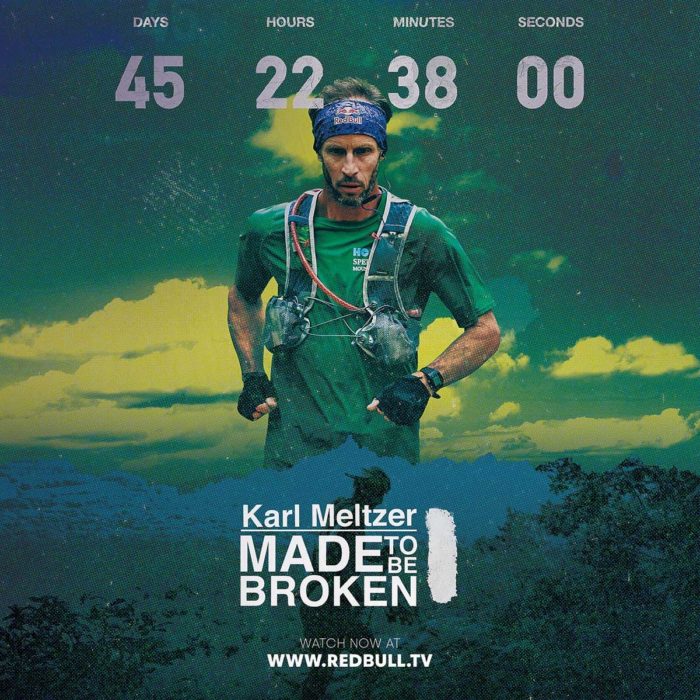 Edit 6/25: Made to be Broken is now available on Netflix.

‘Made to be Broken’ is a film about Karl Meltzer falling down.

But then, it might be more appropriate to say that Red Bull’s documentary is a beautifully shot testament to endurance, teamwork, and most of all, perseverance. It was shot and produced by a filmmaking team who followed Meltzer during his 2016 record-setting trek of the Appalachian Trail, and it begins with Meltzer falling, bruising, and struggling. 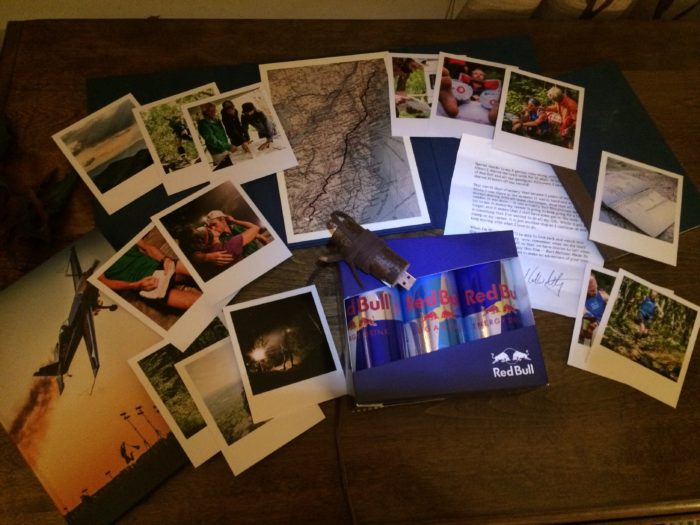 Most adorable press packet I’ve ever received? That would be the one with a USB stick made out of an actual stick.

But the documentation of Metzler’s actual record attempt begins atop Mount Katahdin, when a watch reading 5 AM drops from the camera and reveals Meltzer – already twenty feet away and picking up speed. This sets the tone not only for Meltzer’s character, but for the rest of the film. This isn’t a fan flick made solely for devoted ultra-runners. With its unique blend of humor, struggle, and beauty, ‘Made to be Broken’ is for anyone who loves a good story.

The story is about famed ultra-runner Karl Meltzer, who completed the 2,190 mile Appalachian Trail in 45 days, 22 hours, and 38 minutes on September 18, 2016. He averaged over 47 miles per day, wore 19 different pairs of shoes, passed through 14 states while covering 465,000 feet of elevation gain and loss, and consumed over 350,000 calories’ worth of pizza, beer, and peanut butter and jelly sandwiches.

Meltzer is familiar with the kind of numbers associated with an AT record attempt because this was his third time going for it. His long-standing relationship with the Appalachian Trail and its elusive record for the fastest known time (FKT) were huge motivators this time around. “Your body can only handle doing that kind of thing so many times,” said the 49-year-old runner, “…I was going to give it everything that I had this time because how many times to you get to do this?” 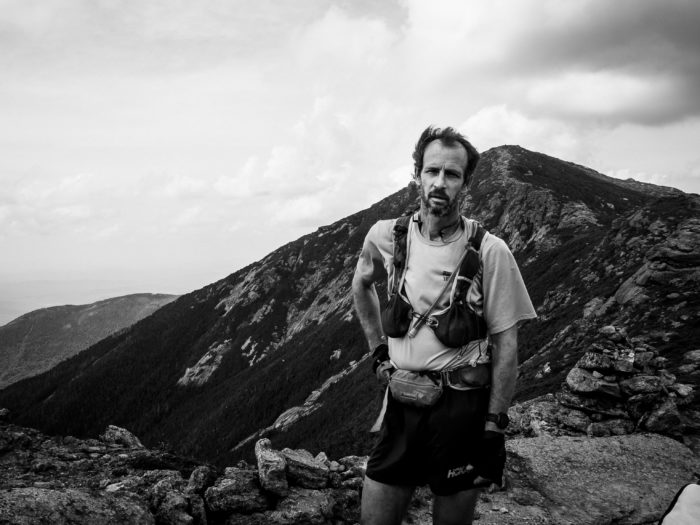 “The first time I did it in 54 days. I had issues, I learned a lot from it,” Meltzer says of his 2008 attempt. On his second record attempt in 2014, injuries prevented him from getting the record. A lot of people would have stopped there, satisfied to have completed the 4th fastest Appalachian Trail hike, but Meltzer was even more motivated. He crewed for his friend Scott Jurek last year, helping him to shave 3 hours off the record in 2015, and when Red Bull offered to sponsor Meltzer for the following year, he was ready. “I had the perfect crew, the perfect setup, the way I wanted to do it – and then making the film was bonus on top of that.”

Meltzer wasn’t going to waste this opportunity, if he could help it. He drove the entire Appalachian Trail before hand, taking note of road crossings and distances for his crew. To train, his crew leader Eric Belz even went to Maine with Meltzer in 2015 and ‘practice crewed’ him for the 280-mile section of trail. “Looking at maps doesn’t really do it. You’ve got to get out and feel and really experience it to get the real deal,” says Meltzer who, depending on how you look at it, spent either 18 months or 9 years planning those 46 days. 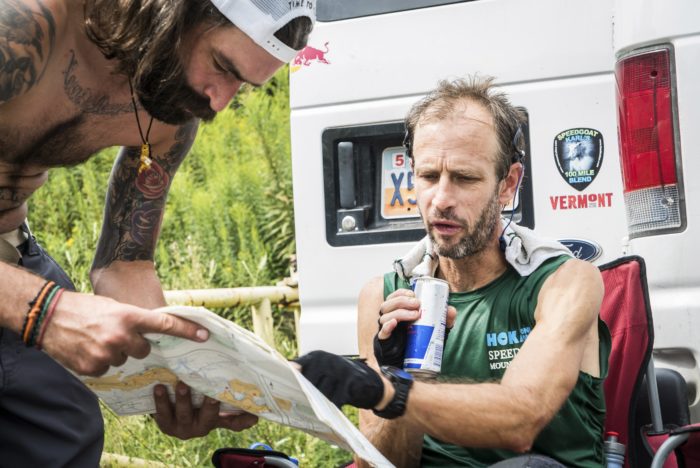 Eric Belz and Karl Meltzer go over their maps during a break.

“I don’t really do well with sleep deprivation,” says Meltzer. Maybe the most impressive part of Meltzer’s record is that he actually managed to get 7 to 8 hours of sleep per night, a feat he attributes to crew efficiency and careful planning. “I was going just fast enough to get enough sleep.”

“I woke up at 4:30, I left at 5. I got to the van at 8 at night and I got to sleep at 8:30 after eating dinner, after icing my shins, after cleaning my feet.” Meltzer didn’t bother much with showers, a fact which his wife attests to in the film. Sleep was Meltzer’s secret weapon. “When you rest that much your body rejuvenates and rebuilds and you can go on the next day.”

Meltzer, who talks almost as fast as he moves, doesn’t seem like a guy who needs a lot of sleep. But the video’s producers made good use of his energetic speech by overlaying his voice on running footage, creating the illusion of movement throughout the film. 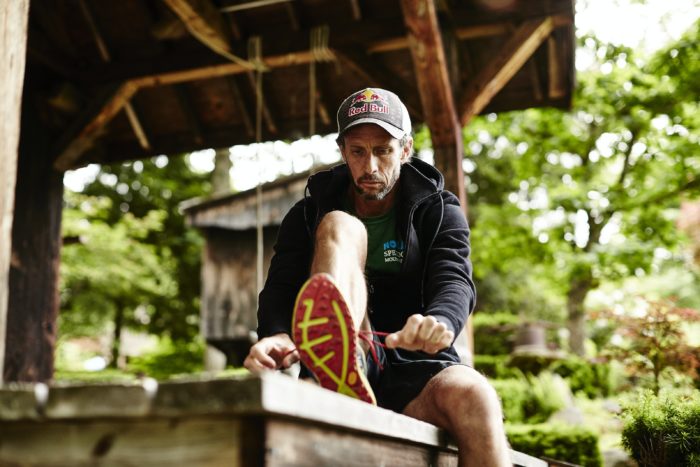 Meltzer went through 19 pairs of his signature shoe, the Hoka ‘Speedgoat.’

Watching Meltzer, you’re watching someone who possesses total efficiency and pure love of their sport. “I said, ‘the film crew can’t get in my way,’” he admits, laughing, “and they didn’t. They were fantastic.” Meltzer found the film crew extremely accommodating, which is important when ten minutes represents half a mile. Whether he was jamming along to AC/DC on his headphones or joking with Belz, Meltzer seemed to be in high spirits as he cruised through the beginning of the trail. 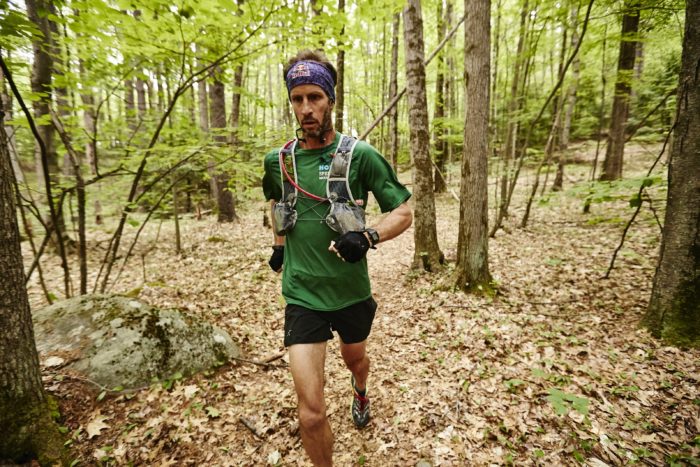 The first 19 days Meltzer was ahead of pace, which is unusual. Between its rocky terrain, steep pitches, and harsh weather patterns, the New England section of the AT is considered some of the most challenging hiking in the world. But Meltzer had an advantage on the trail here because it’s where he learned to hike. “I’ve run roads as well and it’s hardly as entertaining,” says the NH native. Meltzer got his trail name, ‘Speedgoat,’ because of his speed over technical terrain.

Most hikers complain about the ‘green tunnel,’ the layer of trees surrounding the trail and obscuring views on much of the AT, but Meltzer, who’s been living in Utah, says it’s what he misses most about east coast hiking. And the film helps even the most jaded hiker see the trail through Meltzer’s eyes, in fact, pulling away to offer beautiful shots of Meltzer running through a copse of slender trees, or offering sped up views of the green tunnel in forward and reverse. 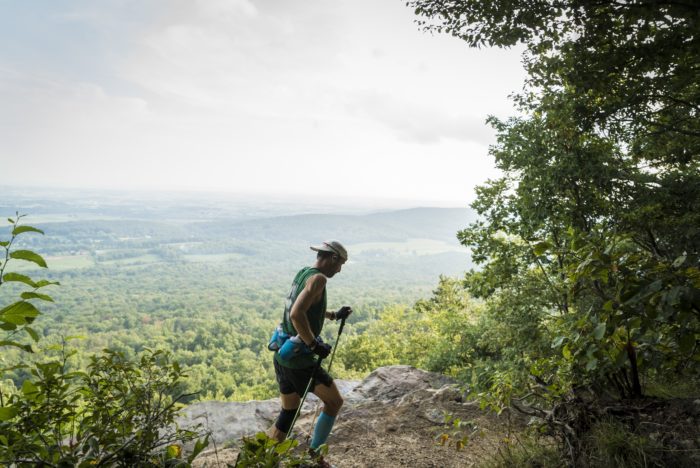 And, like any good movie, our protagonist reaches a point where his goal becomes compromised. Meltzer struggled with tendonitis and foot problems in Pennsylvania. “That’s a hard place for any injury because Pennsylvania is awful,” he says with a dose of Meltzer honesty, “It’s really rocky and nasty.” The team lost their hard-won advantage, regained some ground, and lost it again. “You go through these periods of good feelings, bad feelings, and then we get 10 days out. That’s pretty much the final lap of the mile,” he says, channeling his distance runner mentality, “You keep your head in the game.” 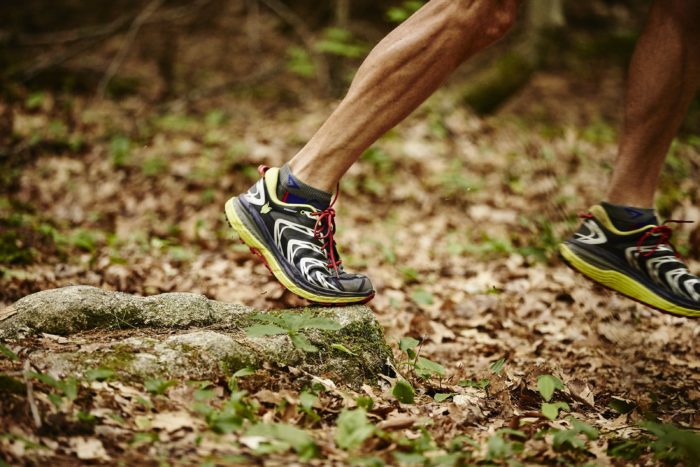 The crew has a favorite phrase for this: “Smelling the barn.” In fact, while Meltzer is busy running, eating, and sleeping – which is most of the time – his crew fills in with material, insight, and stories that keep the film feeling fresh throughout. One thing that’s hard to miss in the film is that Meltzer often refers to his achievement with collective pronouns, using “we” instead of “I” when he’s giving credit. “The crew was fantastic. I mean they’re awake more than I am; it’s just ‘hurry up and wait’ all the time,” he says of the small crew consisting of his father, ‘Karl Senior’, his wife Cheryl, and his old roommate and friend, Belz. “And it’s tough to do that – when I did that for Scott it was tough and I wasn’t in charge or anything.” 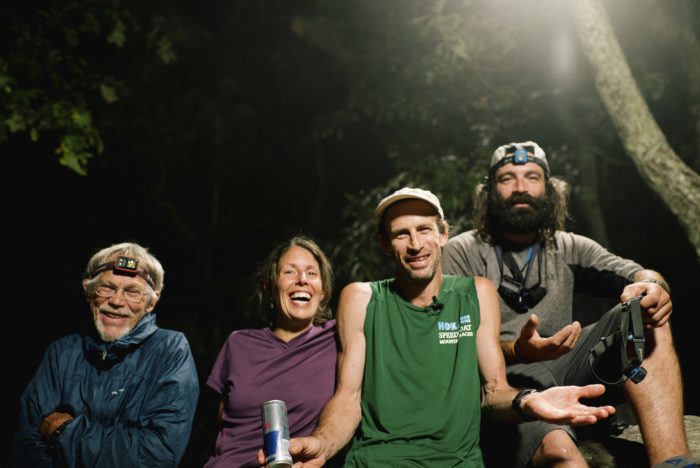 Several other characters showed up along the way to help lead Meltzer to Georgia. His friends Mike Mason and John Basham showed up at different legs and previous record holder Dave Horton sporadically appeared with chicken and “almost too much icecream.” For a large section of the trail the team had help from current record-holder Scott Jurek, who Meltzer cites as a big inspiration, saying, “He was really tough at the end, the way he scraped his way to Katahdin at the finish was impressive.”

It’s not uncommon in the world of ultra-running to see one athlete help another break their own record. “We’re competitive for sure but we help each other anyway, because it’s fun to watch people to succeed,” Meltzer sums it up. 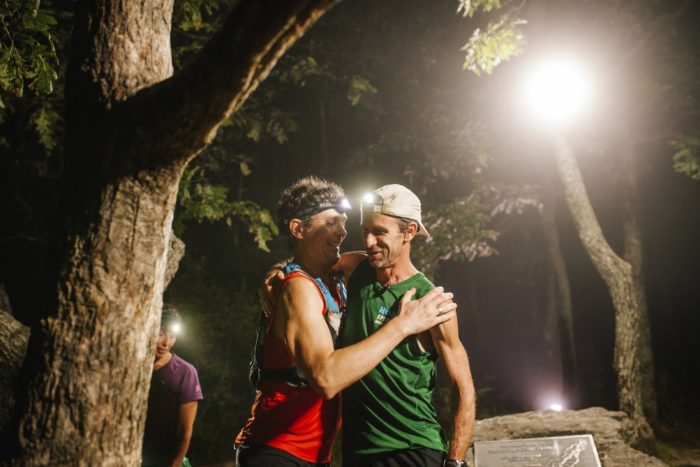 The filmmakers did an incredible job synthesizing an intense experience into a digestible story that manages to be inspirational and casual, serious and funny at the same time. One moment Meltzer is eating a pint of ice cream in 3 minutes, and in the next moment his crew is scrambling to find his location. One feature of the film that’s particularly engaging is how often it shows Meltzer actually failing or struggling. There are a lot of fast cuts that show him tripping over rough rocky trail or doctoring massive blisters. There are times where you as a viewer, despite knowing better, wonder, ‘will he make it?’

Knowing that, Meltzer’s sole criticism of the video is a real testament to how hard the trail actually was. “If there’s anything in the film it doesn’t show enough of it’s probably the actual misery that goes on,” says Meltzer, “It’s 46 days of misery.” 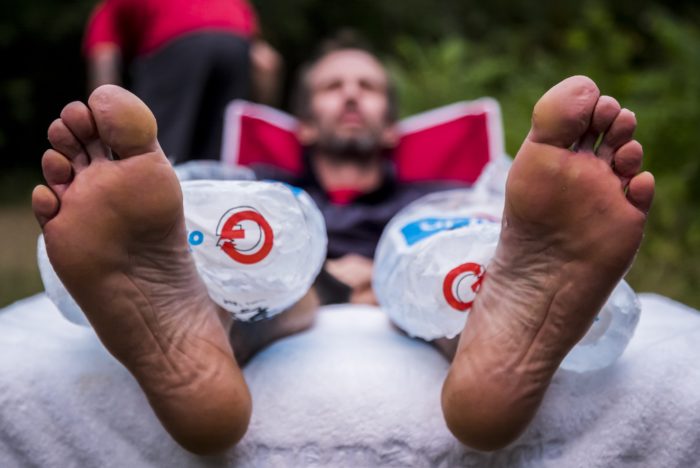 “Karl cuts his own hair,” says Cheryl while she watches her husband hack off his locks in the van’s rear-view mirror, “He’s cut his own hair as long as I’ve known him, and – I don’t know why.” Whether he is struggling or celebrating, the video captures one thing loud and clear: Meltzer is his own boss. He makes his own rules, sleeps when his body needs it, and eats whatever he wants. At one point in the film, we see him running through Hanover – one of the more popular trail towns – and refusing to stop as planned because he feels good enough to keep going. Hours ahead of schedule, he offers the camera a big smile and his middle finger. And, even after watching him crash into rocks and roots, fight with exhaustion, and hike through tendonitis, that’s still the image that stays with me: Karl Meltzer, legs blurry, eyes full of glee, heading towards some extra miles as he flips off the camera.

Because what’s better than watching Karl Meltzer fall down? Watching him get back up. 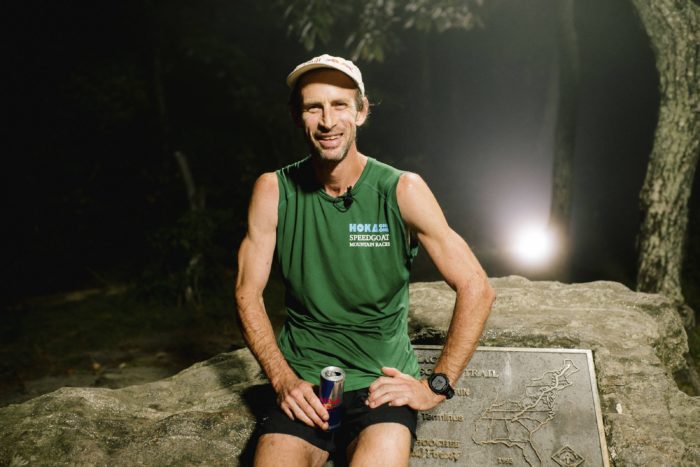 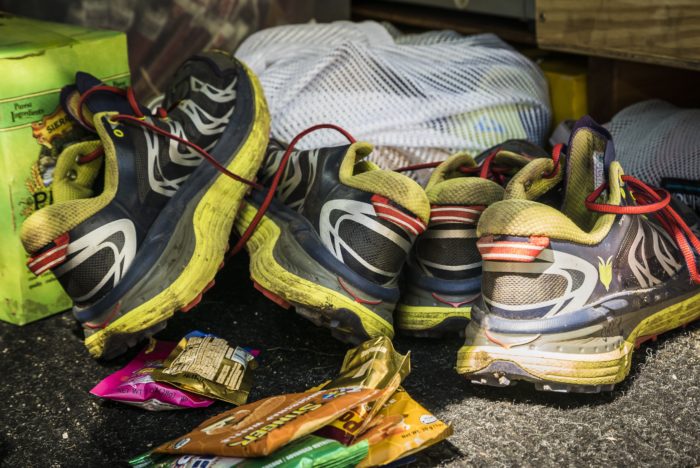 Karl’s personal website is where you can learn more about his coaching and races, and Here’s another link to Red Bull’s TV link and their microsite.

Want to know more about the Hoka One shoes that Karl designed himself? Click here to check them out.