I woke up before 6am in my hammock after having a dream that I was alone trying to navigate through Mahoosuc Notch. I twisted my head to look where Rash and Piñata were hammocking nearby, but I couldn’t see their tarps. I hurried to pack up, thinking they were already on trail and maybe I didn’t hear them try to wake me since I had my face inside the mummy sleeping bag. As I got out of my hammock, I realized I hadn’t looked far enough back, and they were both still there. I finished packing up, and the three of us ate breakfast in the shelter with Scratch (SOBO), Edge (NOBO), and Winter. Scratch lost his spork, and was using a worse for wear plastic fork with the tines and handle broken off.

Last night was very cold, and reminded me of the Smokies. I’m glad I swapped my sleeping bag quilt out for my mom’s mummy bag, because last night I zipped it all the way up and stayed toasty except for my nose sticking out the hole. Edge, who was on moose duty last night at the pond, reported no moose sightings. He saw some beavers hanging out, but no moose. While eating breakfast from the shelter, we were treated to a beautiful view of the mountains with fluffy clouds at the bases.

Rash, Piñata, and I headed out together. It was my goal to stay with them as much as possible today so we could do Mahoosuc Notch as a group. Today was full of steep climbs back to back, but I was keeping up. The downhills were on wet slippery rocks, and we went over dozens of plank walks. Not all the planks were anchored, so stepping on them was a gamble to see if they would hold or if they were just floating on the muddy water.

We stopped to get water and Rash’s bag started leaking. I made a reservation at a hostel in the next town and we ate some snacks. A few miles later, we came to the Maine border with Winter. A man and woman were also there, and it turns out the man is the caretaker at the Tumbling Run shelters back in Pennsylvania! We met him walking his chocolate lab when we stayed there. We took pictures, had a nice break, and hiked on. 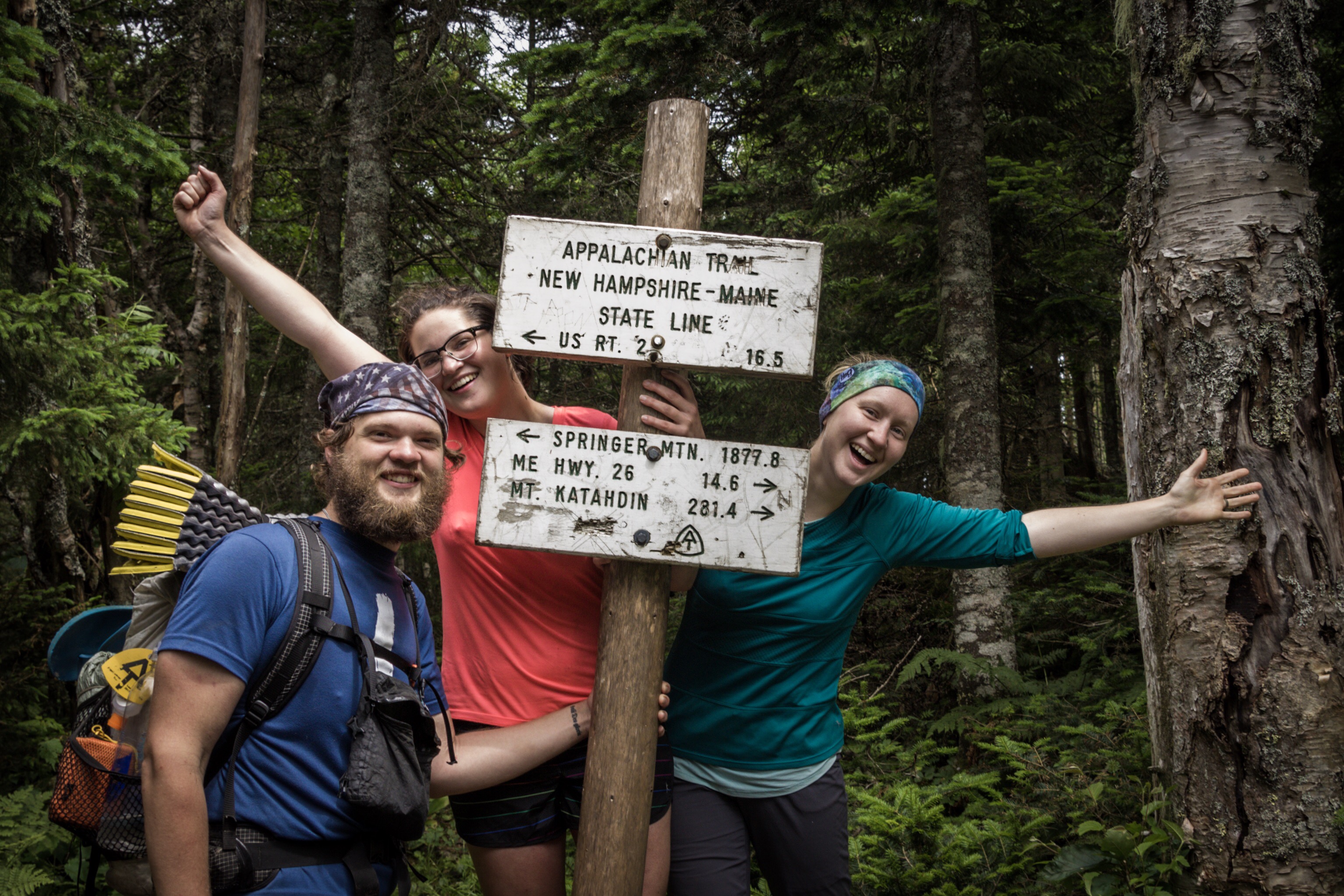 I kept up with Rash and Piñata until a large climb set me back. I met a family with an adorable goldendoodle, and climbed some treacherous rebar ladders in the rock face that required rock climbing skills to maneuver and twist around. The trail was muddy with slippery roots, and I fell on my butt going down a steep rock. After recovering, I took the trail slower, but had another fall on my knees. My butt and knees were sufficiently covered in mud, and I added my left foot to the list when I came to a muddy section with floating planks and my left foot stepped in mud past my sock. 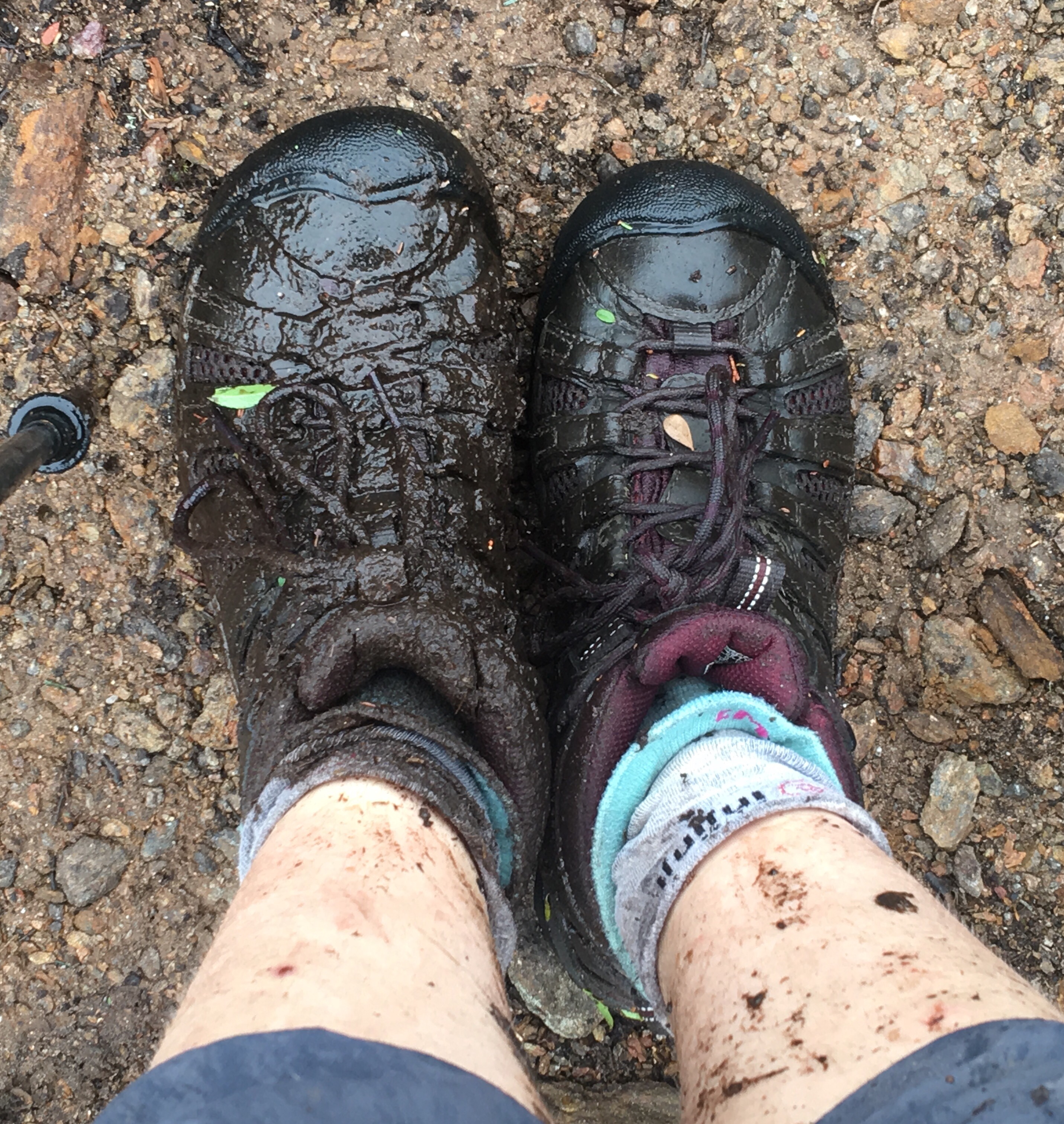 It started misting when I was in the woods, and I started getting wet when I was on top of one of the peaks. The wind also picked on the peak. The rain drops were tiny, but left me soaked. The rain was condensing on my eyebrows and dripping into my eyes. I was trying to make it to the shelter without my rain jacket, but got too cold on one of the peaks and stopped to put it on. I learned a hard lesson back in Virginia hiking into Harpers Ferry to not wait until I’m too cold to put on rain gear, or my fingers won’t be able to unclip my pack. Winter came up behind me, and we hiked the 0.2 to the shelter. Right before the shelter was a large wooden ladder, and I could see Rash sitting in the shelter as I came up the ladder. I was immensely relieved because I wasn’t sure if they had pushed on.

We decided to stay at the shelter for the night instead of pushing on to do Mahoosuc Notch today. It was still early, only 3:30, but we were all exhausted, wet, cold, and more than ready to be done for the day. Other than the three of us and Winter, 2 SOBOs came by briefly and left. Edge and Wes (SOBO) stayed in the shelter with us. We gave Wes the trail name Virgin since he spent some time in the Virgin Islands, but he didn’t seem thrilled about adopting the name. Edge came up with some word games to play and we had a nice, relaxing evening talking. 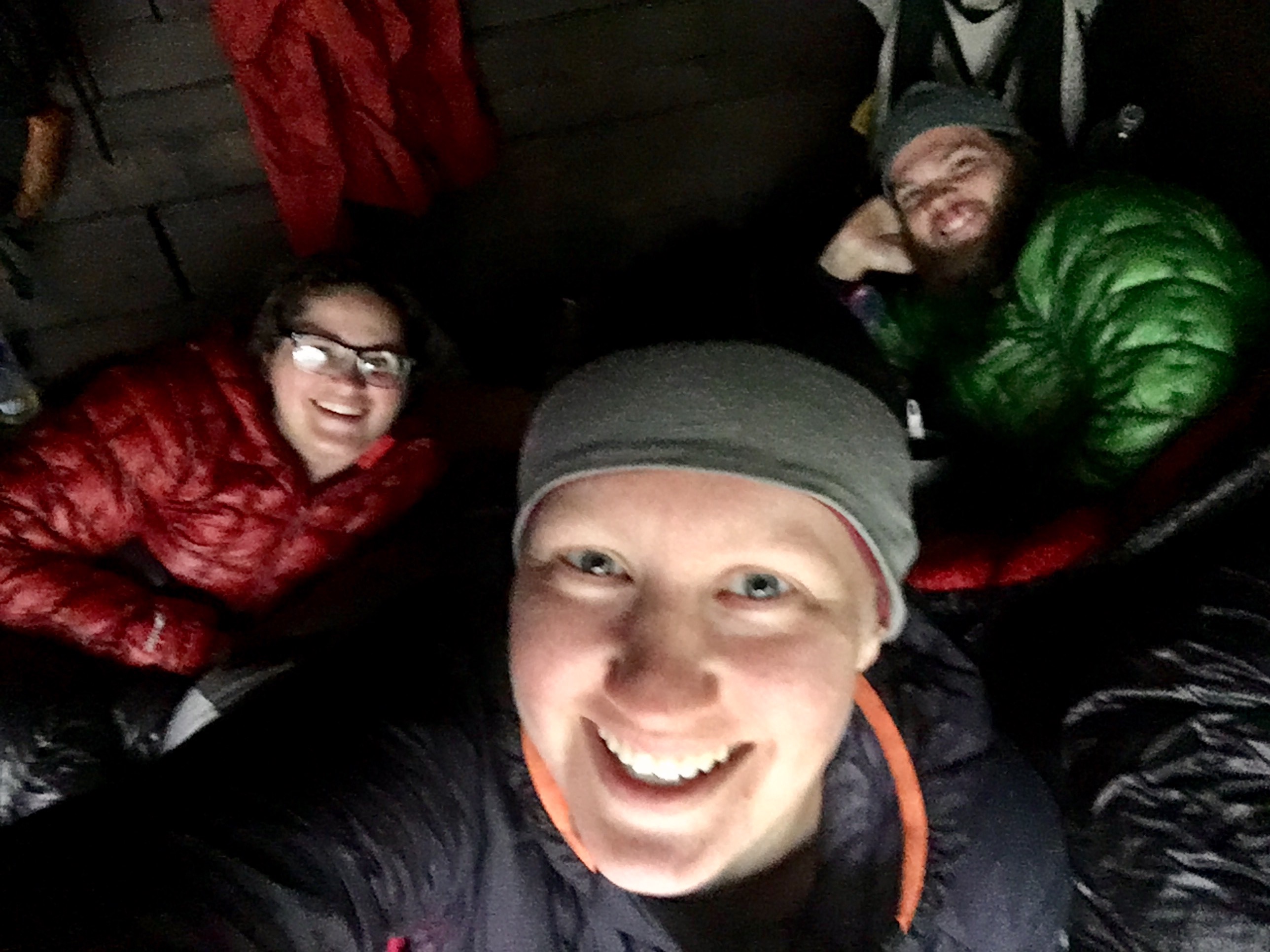 I woke up a few times during the night to rain coming down, but no thunderstorms like it was calling for. We were cozy and dry in the shelter, but our clothes from yesterday and shoes were still wet. I made breakfast in my sleeping bag. My back hurt from sleeping on the shelter floor and I didn’t want to hunch over my stove. I put on my dry pair of sock liners and socks, even though they were going into wet shoes. Getting the toe socks on while wet is a pain.

It wasn’t raining when we started out, but the leaves were drenched, and brushing up against them left my sleeves wet. 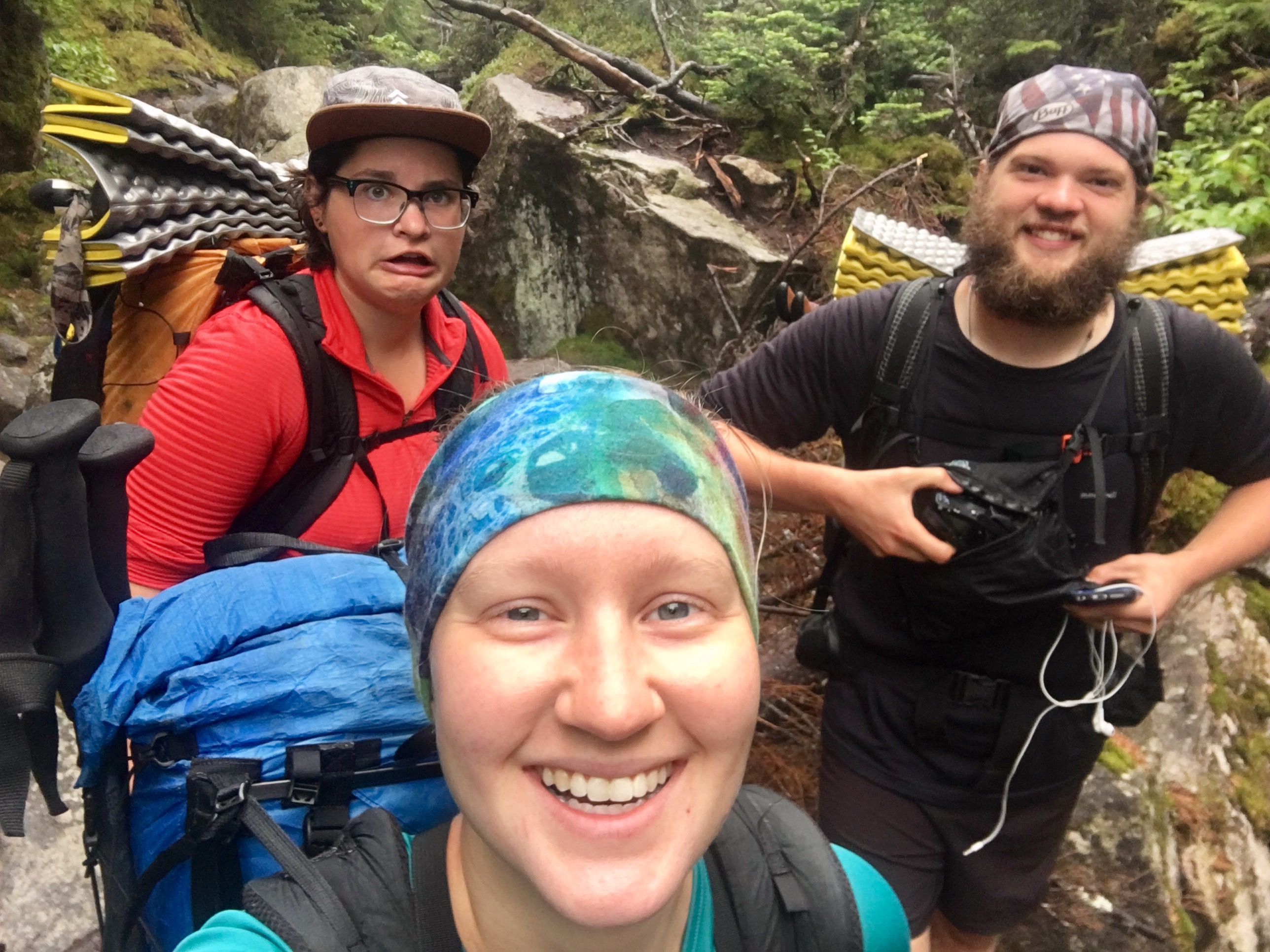 Our Mahoosuc Notch before picture

We had a short 1.5 miles to do before we hit Mahoosuc Notch. We saw Winter going down a rebar ladder before the notch, and she hiked ahead. On our first descent into the notch, we were hit with a blast of freezing cold air, and saw large mounds of ice in between the cracks in the rocks. 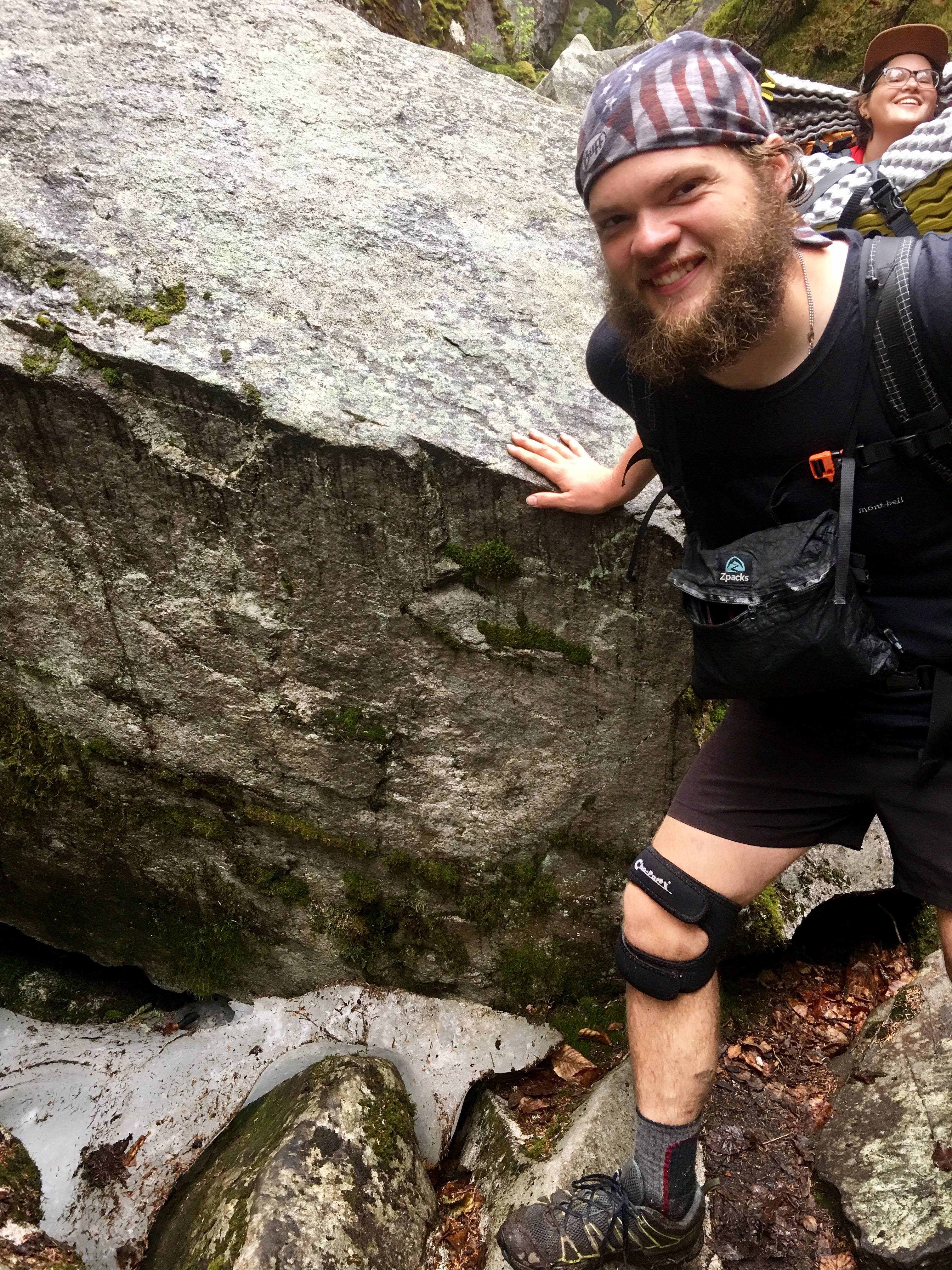 Rash and Piñata with a mound of ice

I slept like a log last night. We got up and walked into town for breakfast at Mill’s Market. On the walk into town, I ate my leftover artichoke and bacon pizza from last night. At Mill’s Market, I got French toast that came with a small condiment cup of real Maine maple syrup. At breakfast, we talked about our game plan for the next few days and hashed out a rough plan. We bought resupply food there, but were short on dinners, so we went next door to the gas station where we were surprised to find the chow mein we normally buy. 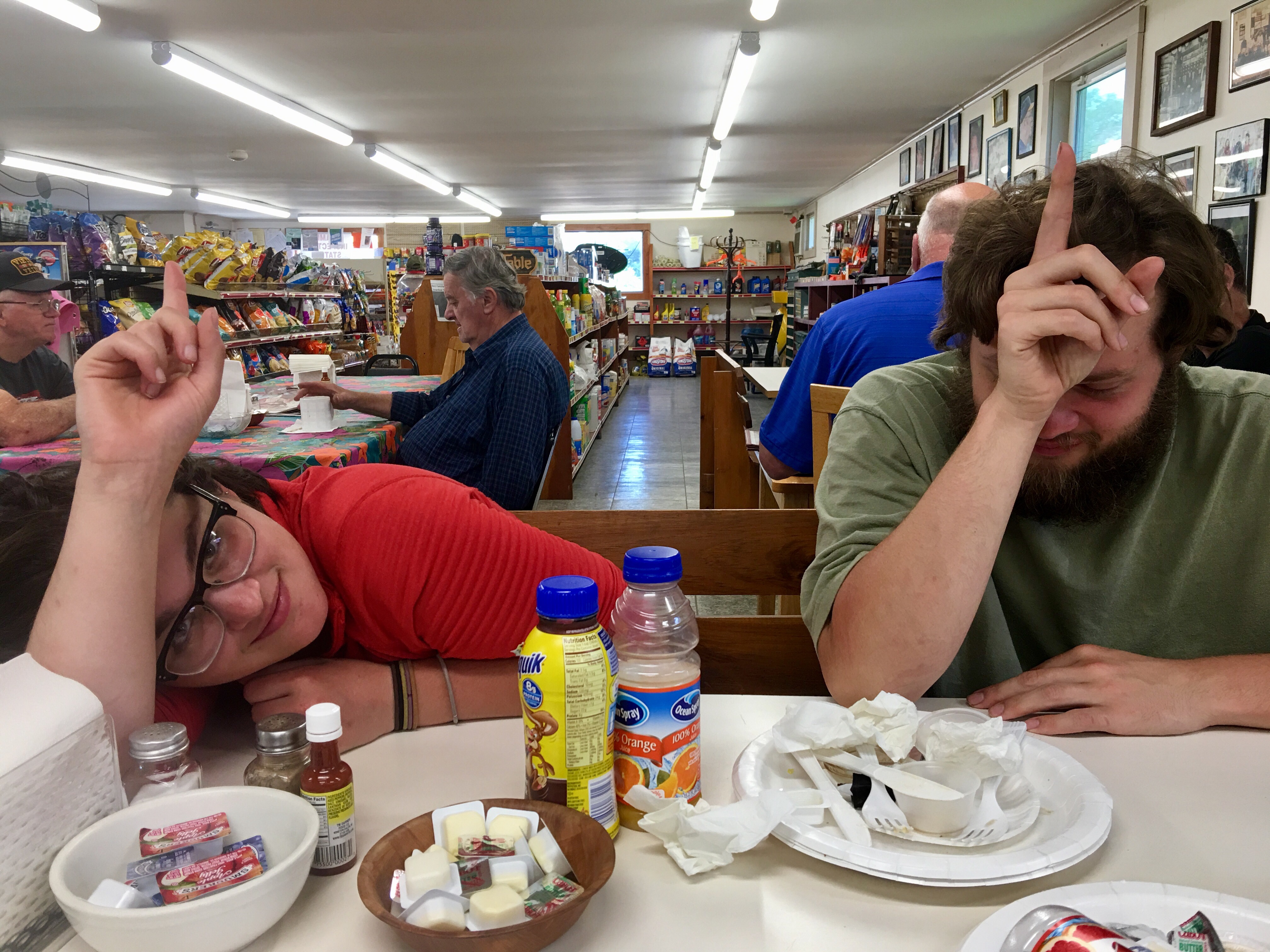 We went back to the hostel, and talked with Fox and Rainbow as we packed up our food and gear. After a long debate, I decided to hiker box my rain pants. At 11 oz, they’re heavy and bulky, and they don’t smell great since you’re not supposed to wash them. I was planning on giving them to my mom, but I called her and she wasn’t interested, so that gave me the green light to get rid of them. It’s weird getting rid of gear that I spent a lot of time researching and acquiring, but it makes more sense to not carry a useless 11 oz up and down mountains if I don’t need to. 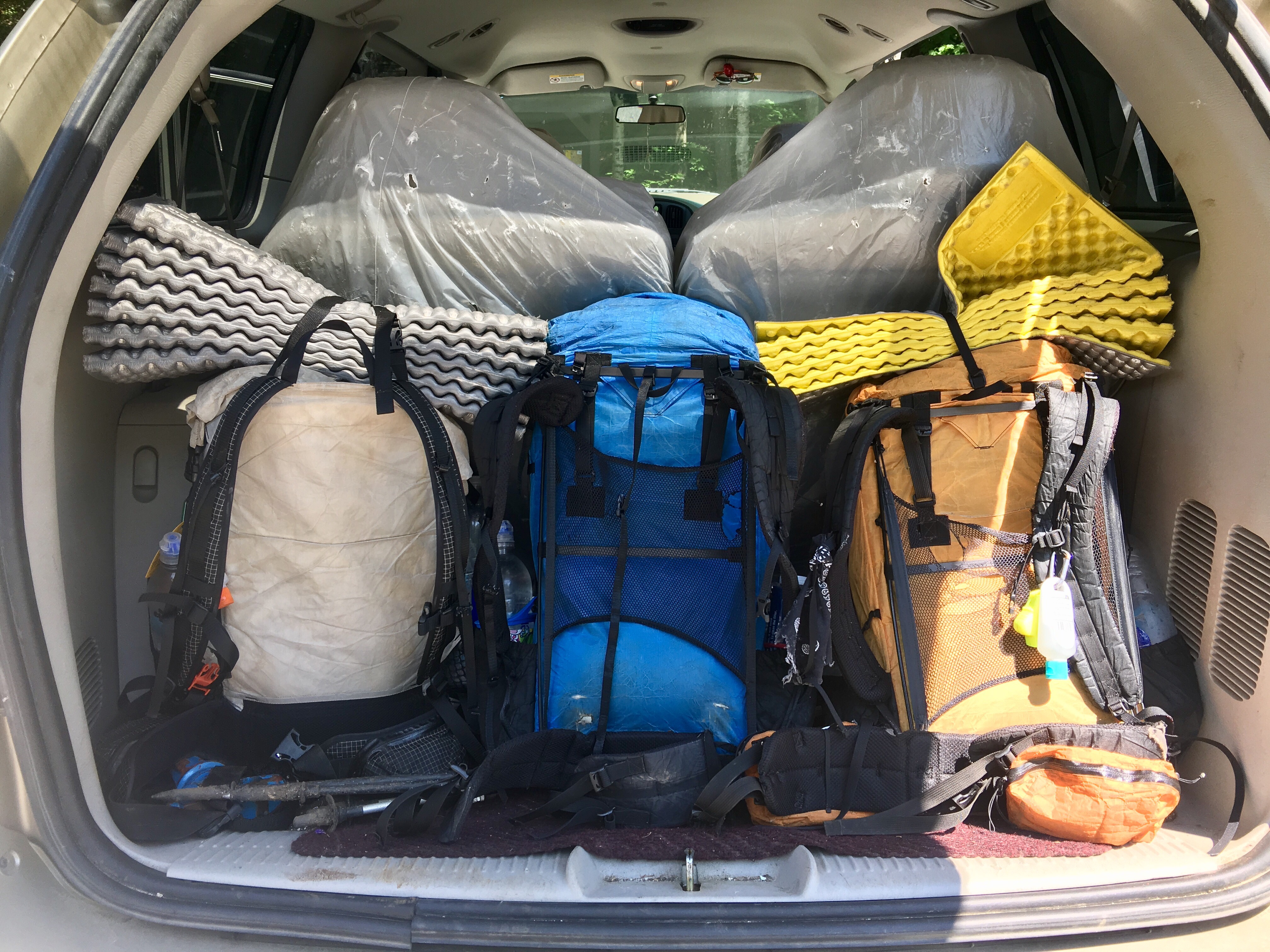 Our packs in the shuttle

We were driven back to the trailhead by a Native American man who talked to us about the moose and the bear in the area. At the trailhead, we took our picture next to a huge wooden AT symbol, and talked to a nice day hiker named Tom who we saw at Mill’s Market this morning. 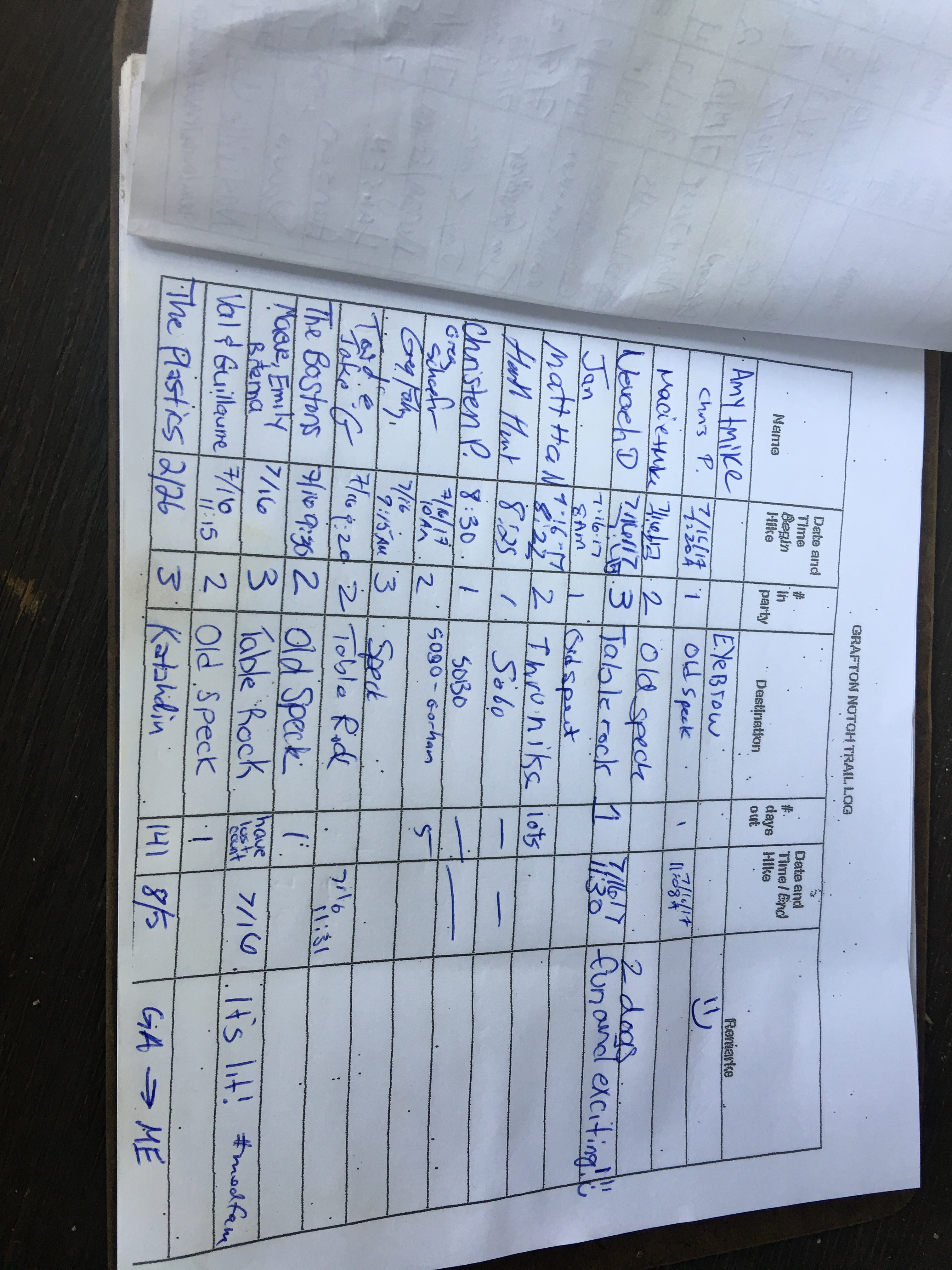 The initial climb was partially exposed and hot, but not too steep. We stopped at the shelter for water and to rest, and a man who was already at the shelter made a small fire to boil some water. We continued on, hiking together with me leading since I don’t go fast uphill. We came to a steeper climb that was mostly stairs in the mountain, and some NOBOs passed us. Hikers had been telling us about the crazy exposed rock on Baldpate mountain, but after summitting the west peak without difficulty, we didn’t know what the hype was all about. We went down a dip, then started the east peak which was a sheer rock face. There were no alternate paths or side trails. The whole side of the mountain was sheer, steep rock with very few cracks or places to get a grip on the rock. It was also covered in lichen and dried moss. The day had been sunny and hot, so luckily everything was bone dry. We climbed for what felt like hours to the top, and my ankles and toes were killing me. Once at the top, we had to go down a similarly steep rocky path on the opposite side. 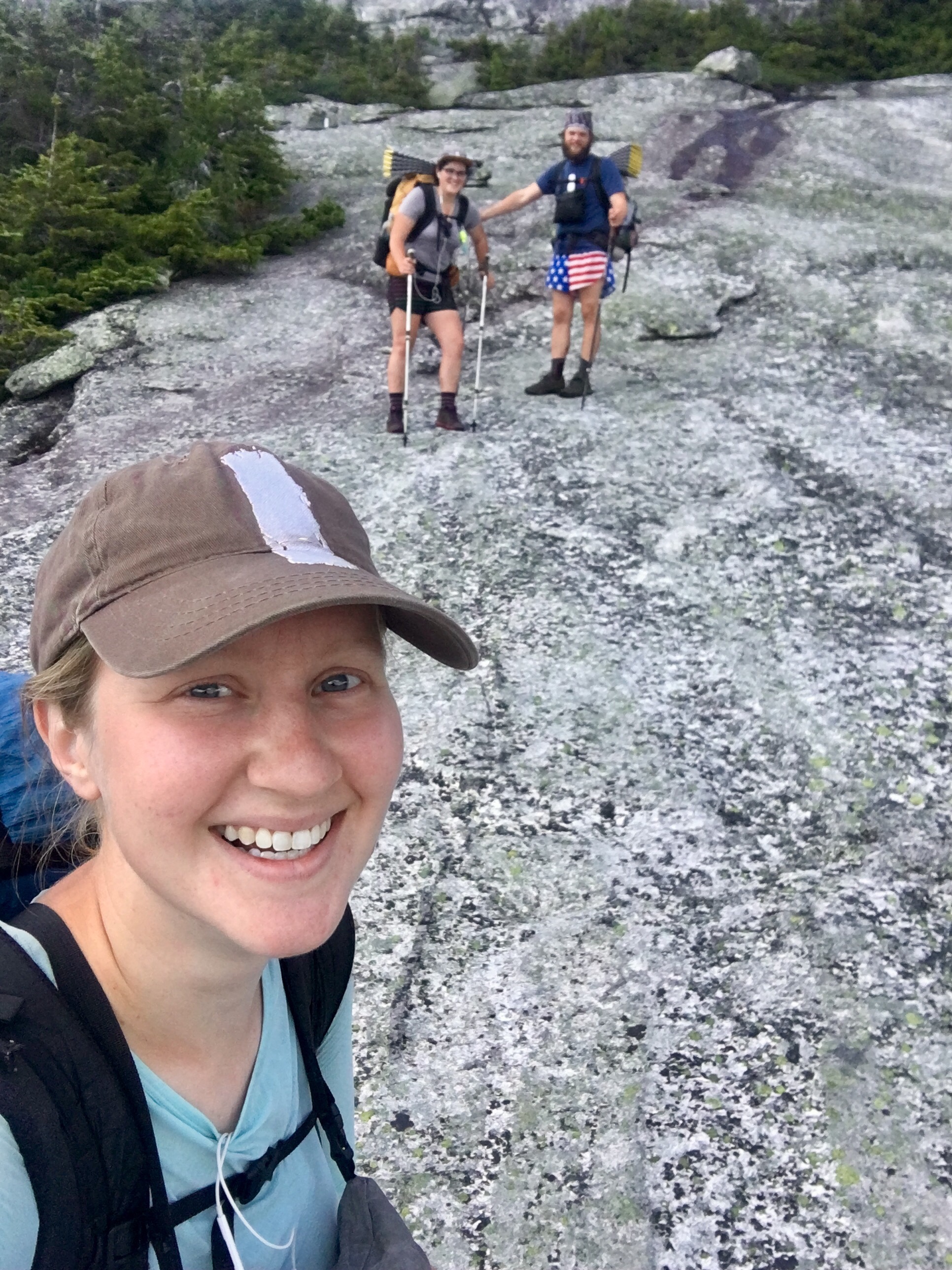 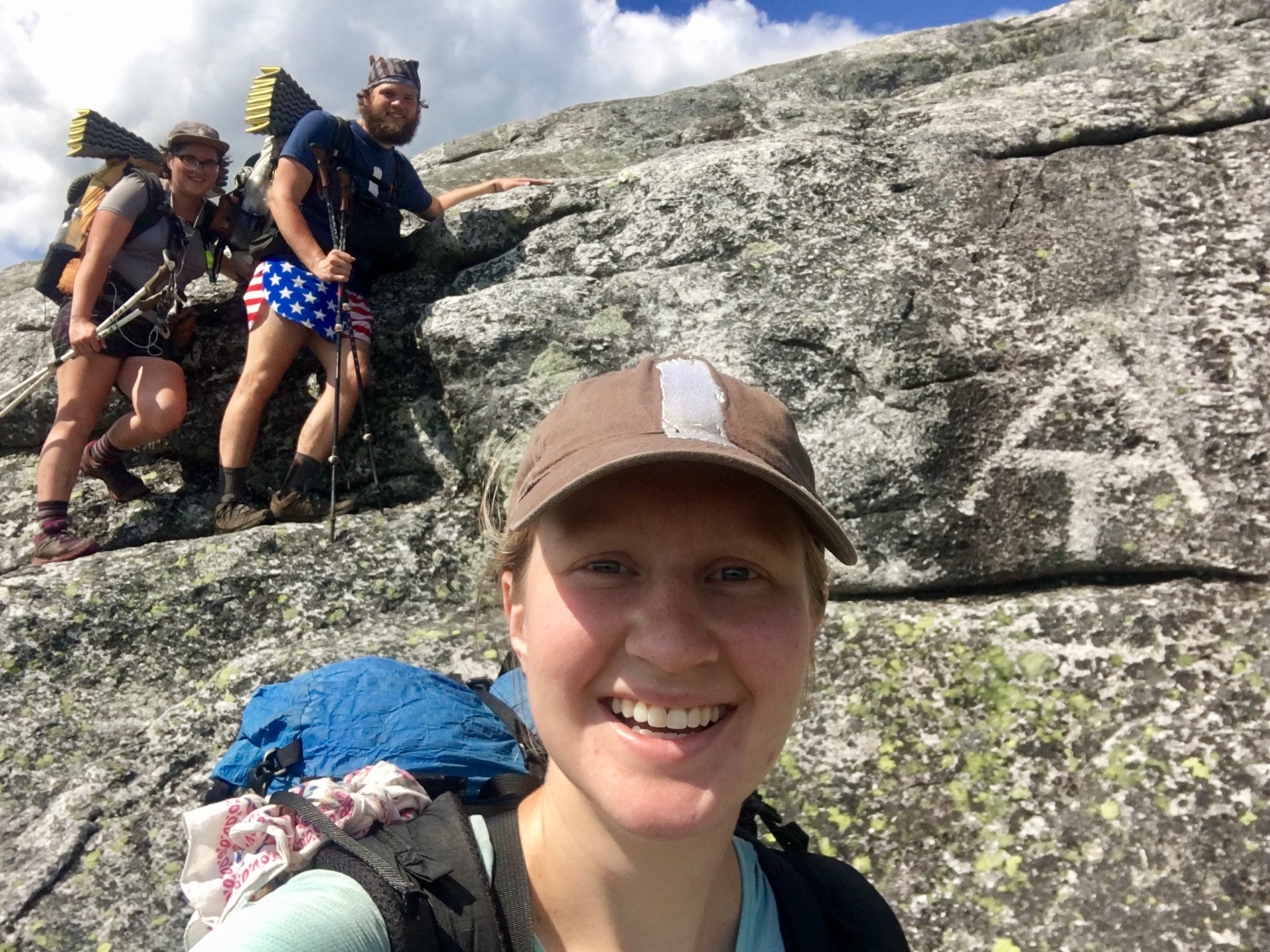 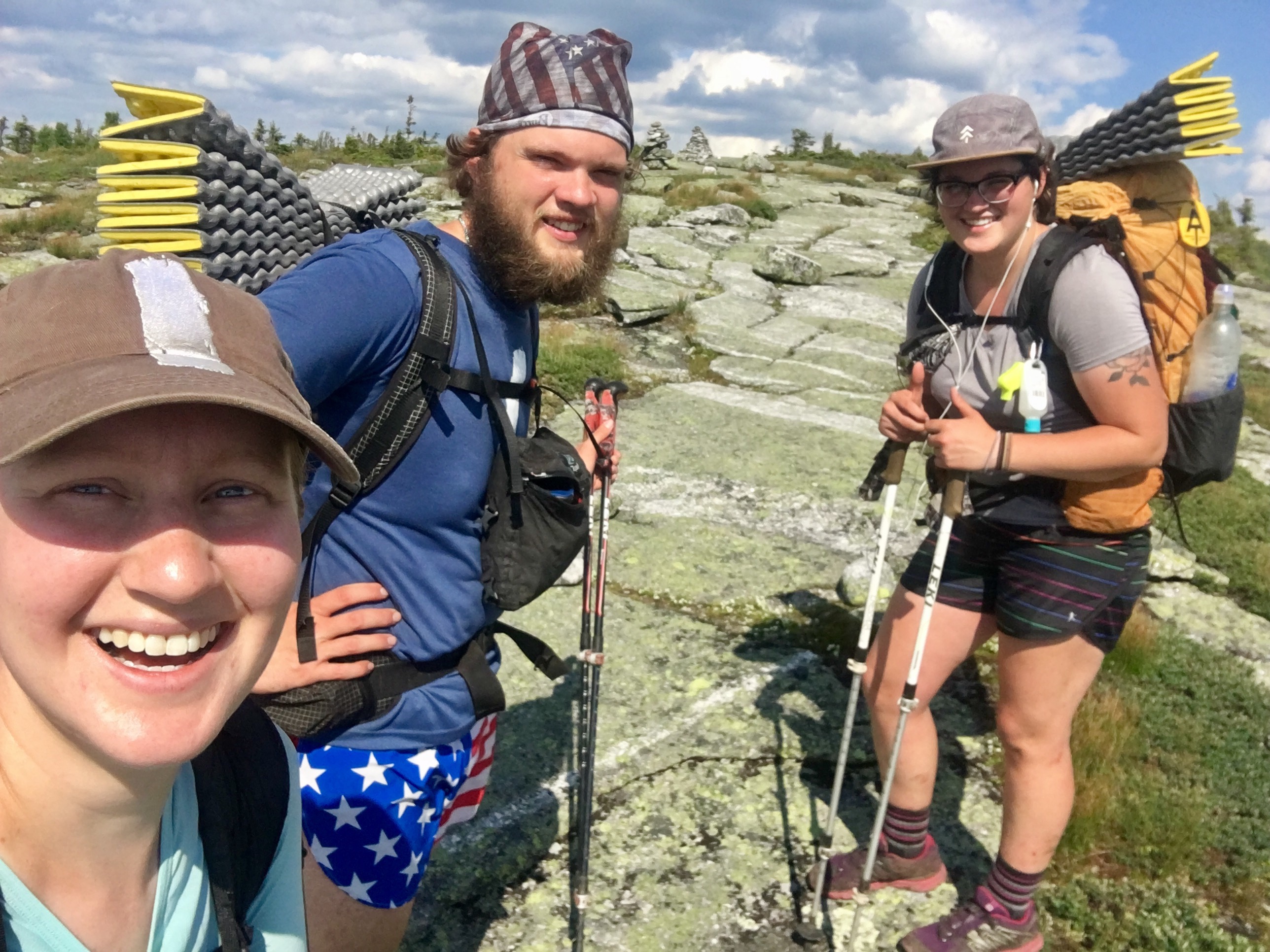 Posing with the carins at the top

We came to the shelter and found 4 NOBOs who had just passed us up the trail. 2 hikers from the U.K., one named Chopsticks who I had met before, and 2 American hikers. The 2 hikers from the U.K. just met yesterday, but happened to have the exact same tent (not a common tent in the U.S.). Rash, Piñata, and I hung our hammocks in front of the shelter, and all the thru hikers socialized and ate dinner. They were talking about the girl with the swollen ankle after Mahoosuc Notch, and one of them said he wished he knew more first aid. I showed him how to tie a tourniquet and do the Heimlich maneuver. We turned in early, listening to the sounds of the creek running nearby.