A gorgeous morning in Maine greeted us as we woke up at the crack of dawn. The days on the trail were numbering down, and the 100 mile wilderness loomed closer and closer. In fact, we had only 18 miles until we reached the southern terminus of the wilderness. But before the 100 miles, we had to go into Monson to resupply and spend the night at the famous Shaw’s Hiker Hostel. Simple, right? Never.

Margarita and I galloped down the noticeably flat trail hoping to get to ME Route 15 by 12:00 in order to get the free shuttle into Shaw’s. We were the only ones on the trail it seemed and it was early on in the morning, so we made the decision that it would be okay to play some music at a low volume while we hiked. Fortunately we had a similar taste in music, and I was given the role of DJ. I played some of my friends music which Margarita seemed to like. But knowing that Margarita hailed from North Carolina, I played some James Taylor knowing that she probably grew up on at least one of his songs. At around this point, we started to cross some streams. There were no bridges, no rocks to jump on, just a stream that we had to go right across. The first one we encountered was just a muddy, disgusting pool of water. There were some downed trees that Margarita and I found a way to stand on. We crossed and stayed relatively dry thanks to these trees. 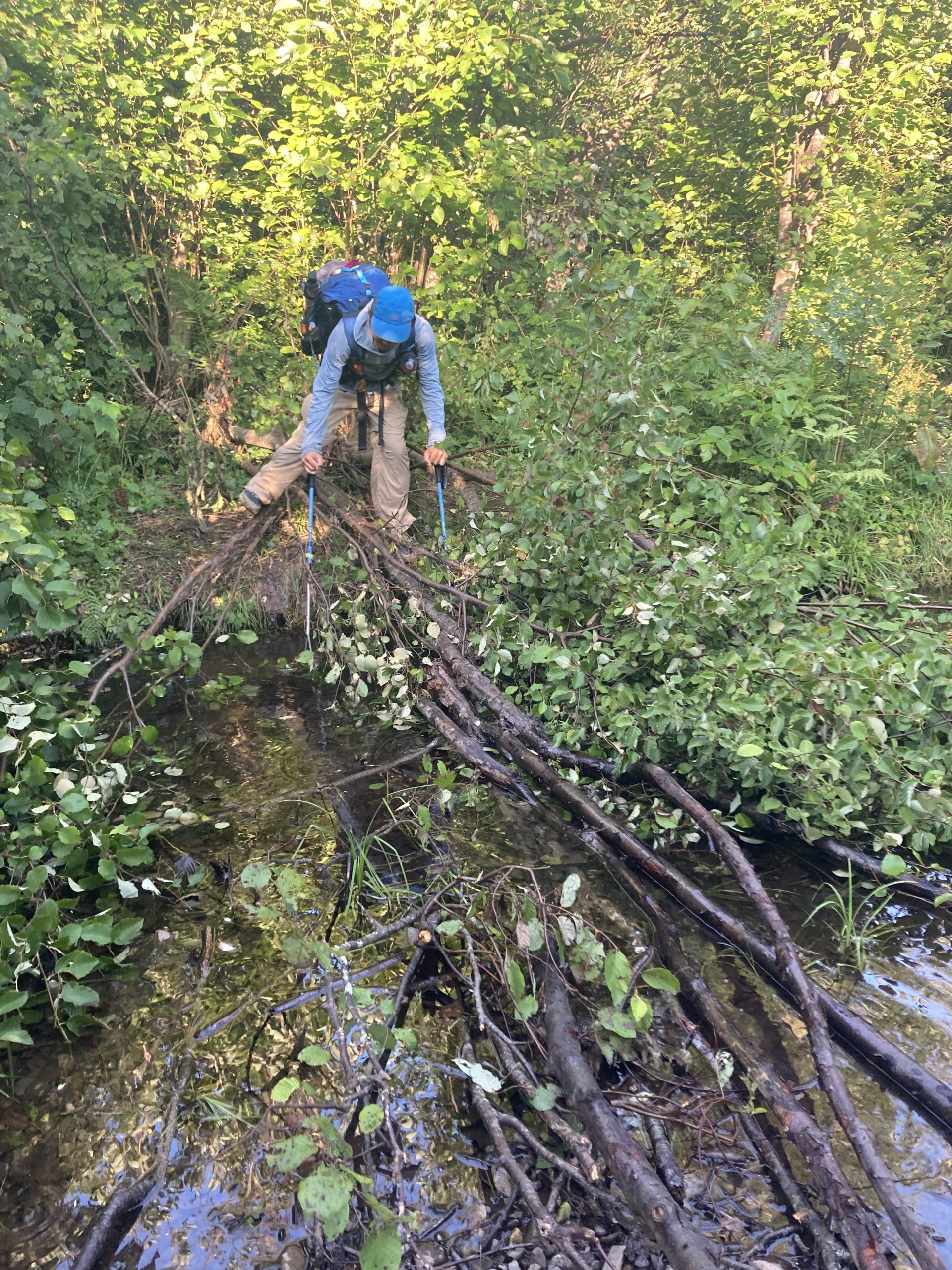 It was the 2nd branch 0f Marble Brook that got me. A very wide, semi-shallow crossing entirely dominated by mud. Margarita and I tried to find other ways to cross but nothing was there. At this point, Fire and Rain by James Taylor was playing on my phone inside my hipbelt pocket. I told Margarita to count me down from five and then I would run across this mud brook. The count down began, and I mentally prepared myself for this fjord. I was keeping my trail runners on because I had no camp shoes. My feet were going to be soaked. Margarita said one, and I started running across the brook that was thigh level. I trudged across as quickly as I could and was over onto the other side in no time. I gave out a loud “YESSSS” but something was off. The music had stopped.

I looked down at my hipbelt pocket in horror as I saw that I had not properly zipped it up. The phone was gone. I looked back across the brook to Margarita who knew what had just happened. The phone was in the brook somewhere. I instinctively went back into the brook and stood there looking around to see if I could find my phone. I could see nothing. Sediment filled every space of this brook creating such a disgusting, brown color to the water. And to make matters worse, a leech all of a sudden became visible in the water swimming towards me. I screamed and ran back to Margarita. I now had recrossed the brook and would have to cross for a third time. We discussed what to do and the prospects of even finding my phone. It was gone. I knew it. I told Margarita that and said we have to carry on. We both crossed and continued on the trail. I had a lot of emotions come through me at this time. I had just lost my communication device, all my photos on the trip were lost, and my ID was tucked inside my phone case. Almost everything was gone it felt. I had only myself and Margarita.

We crossed a few more streams but they weren’t muddy at all. The water cleaned off our muddy shoes and because we were wearing trail runners, our shoes dried out as the sun came out and we continued to hike. For a brief moment we didn’t think we were going to make the shuttle. We had about 8 miles to cover in 2.5 hours. I know Margarita started to doubt that we’d make it. I reminded her that she was the fastest lady on this trail, and I think that reinvigorated her. We made the shuttle with 20 minutes to spare.

We jumped into Shaw’s van with a bunch of other hikers that we had met the night before. Shaw’s was going to be very busy.  We got there and our suspicions were correct as the hostel was packed with hikers going SOBO, NOBO, or just section hiking. We got the whole tour of the place and settled on our sleeping arrangements. Margarita and I opted to just camp on the lawn. At this point of the trail, sleeping in bunks with a bunch of other hikers who snore didn’t appeal to me anymore. My sleep system and my tent were good enough.

There was still an issue that had to be resolved and that was my phone. I still felt I needed a phone. Margarita let me call my parents, and I explained them the situation. Surprisingly, they weren’t as upset as I thought they would be. In fact, it was my dad who was the most understanding. My mom was definitely annoyed that I had lost another thing (I lost my credit card and student ID in a washing machine in New Hampshire). After consulting my parents, we concluded that getting a new phone would be the best thing to do. So I tracked down Poet from Shaw’s and asked if I could get a shuttle into Bangor, Maine where the nearest T-Mobile store was. Fortunately for me, there was a shuttle heading into that town in an hour, and I could catch a ride with the driver. I waited for this ride by going to the nearest store and eating a light lunch and some ice cream. I also ran into some hikers that I had met in the Grayson Highlands months ago who had skipped up to summit Katahdin and head SOBO. After an hour, I went back to the hostel and jumped into the van on my way to get a new phone.

The shuttle driver was a man named Buddy who was a bit of a trail legend himself who had known the original owner of Shaw’s Hiker Hostel in the late 1970s. Buddy dropped off a couple hikers at the Bangor airport and then dropped me off at the T-Mobile store. He said he’d come back in an half an hour. In reality, he should have just stayed because I was told almost immediately that I couldn’t get a new phone unless I presented a valid physical ID. I tried to explain that my ID was in a mud brook but that didn’t matter. No phone. Not until I could get an ID at least. I went back to Buddy who was in the parking lot and told him the news. At the very least, he said, I could get my food resupply for the 100 mile wilderness. I obliged and we drove to the nearest supermarket where I got 3.5 days worth of food. After my resupply, Buddy gave me a cool tour of Bangor. We had hours to kill because he was supposed to pick up some hikers coming in from the airport. He showed me Stephen King’s house and had a nice conversation about trail history, hunting, and animal populations in the state of Maine. He also explained that Southern Maine is towards the coast, not what hikers call Southern Maine. That is Western Maine and the people don’t like to be called Southern Maine.

Eventually we picked up the hikers from the airport and made our way back to the hostel. I arrived back and told Margarita the news. She seemed to have had a great time socializing with the other hikers. At this point, it was 8:00 and approaching bed time. Margarita and I touched bases on what time we wanted to start tomorrow morning and then went into our beds to sleep. I had a tough time sleeping as there was a drunk hiker making a raucous just outside my tent. Eventually things quieted down, and the hostel fell asleep.