Maine or No Maine: Making Two Lists of Possible Outcomes

One month.
That’s four weeks.
That’s 28 days.
Years of thinking and planning and preparing and talking (and, yes, obsessing) has now come down to a matter of days until OneFoot puts his two feet on the trail in Georgia. Seems a bit surreal to us. It’s always been something not quite tangible; always in the someday column of life’s to-do list.

“I’m thru-hiking the Appalachian Trail.” Thousands of people say that each year. In 2016, 3,377 people said it. Less than 20 percent reached that goal. Think about that; less than 20 percent. Many times over the years I have said to Ray, “Do you think you can do it?” Or he to me, “Do you think I’ll make it?” Well, yes, of course we do. But so does everyone else as they stand at Springer Mountain with their packs full of gear and their hearts full of excitement and anticipation.

So what are the keys to success on this journey? And how do we define success?

Just as everyone must hike their own hike, each hiker carries their own keys to success. No two hikers carry the exact keys. This is as individual as the hiker themselves. For OneFoot’s journey, I’ve made Maine and No-Maine lists.

Planning: From gear, to daily mileage, to weather, to resupplies, to menu… and everything else. Not sure how much more planning we can do.
Training: Some say that the trail will train you and there’s no need to go crazy on the pre-trail physical stuff. You’ll get in shape as you walk. No doubt this has worked for some. For Ray, exercise has always been a part of his daily routine. Whenever he’s planning for time in the woods he’s added long walks on local trails with a full pack to his cardio, weights, and swimming schedule. Oh, and stretching, always stretching. From past injuries, he’s learned the value that stretching has in his own fitness plan.
Determination: Ray in May 2014 – “I want to run my first marathon this year.” Ray in October 2014 – crosses finish line of Hartford Marathon. 26.2 miles. Enough said.
Timing: We’ve long planned for this adventure to align with this time in our lives. Kids are grown and nearly on their own (but, seriously, are they ever really?). Ray is now retired. We are financially prepared for this quest. And honestly, he’s got nothing better to do right now. I’m still working so it’s either find a new job, another hobby or go play in the woods.
Support: “You’ll need a good companion for this part of the ride” (yeah, so, another Springsteen quote). I’ll be his personal trail angel and I’m excited to take on that role. I’m totally ready to do whatever I need to do to help him reach Maine – timing out and mailing resupplies, motel reservations when he needs a break, gear replacement, handling finances and household chores and, most importantly, emotional support. Our family and friends stand at the ready and have offered to help however they can. Team OneFoot reporting for duty. 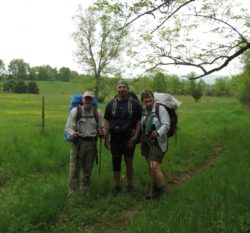 Awareness of the challenge: When training for his marathon Ray adopted the popular mantra “embrace the suck.” Walking nearly 2,200 miles on a straight, flat road would be tough. Walking nearly 2,200 miles with 35 pounds on your back through various elevations, terrain, and weather is freakin’ hard. There are going to be times when embracing the suck will be the only way forward. He knows that. He’s prepared for that – or is he? I guess no one really knows what it’s like until they are living it.
Letting go: Giving up the comforts of home to go live in the woods for six months isn’t for everyone. For Ray, being in the woods is his happy place. Anyone who has hiked or camped with him knows he’s in his element out there. He looks forward to his independence and the absence of a clock dictating when to do what. There is no one to answer to out there. As he has said, he will still need to answer to the miles it takes to reach Maine, but it’ll be on his terms.

Illness or injury: Well, this is a given. We can’t foresee illness or injury. We do know it will have to be a pretty serious issue to get him to abandon his quest to stand on Katahdin.
Psychological: I’m just gonna put this out there. I’m a pretty tough girl to leave behind and he’s gonna miss me. Homesickness is real! One of Ray’s toughest times on the trail are the hours between setting up camp when done hiking for the day and bedtime. The excitement of the day is winding down, his family isn’t there, the mind is tired… it can be lonely. He knows this and has adjusted over the years. No doubt there will be plenty of trail folks around for company when he wants. And there will be other times on the trail when he might wonder, “What the hell am I doing?” Then he’ll remind himself that he’s living his dream… and he’ll keep walking.
Family emergency: Goes without saying that we hope this doesn’t occur. We’ve actually talked about what type of life event or emergency would bring him home. I’d like to let him have his time out there and will prefer to keep the day-to-day stuff away from him. But, if he needs to know about something, I’ll share and we’ll decide the best course of action.

How are we defining success? We have always told our children to find their own way to define success in life. Same goes for Ray’s time on the trail. I generally discourage use of the f-word in life; you know that word, “failed.” Will we be disappointed if Ray doesn’t make it to Maine? Well, of course. The goal is to thru-hike the Appalachian Trail. But, if that doesn’t happen, we’ll remind ourselves that success can be found in every experience in life. If you don’t see it right away, just look back – it’s there. 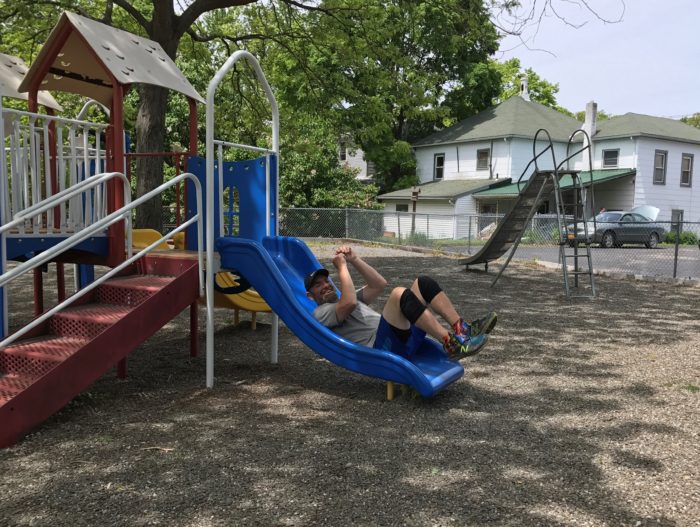 Those downhills along the AT can be tough.