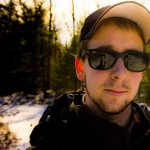 The MAINE highlights of the first 200 Miles

I’m sitting in a library in the booming metropolis of Rangely, ME. My clothes emanate a distinctly smokey scent, my feet are throbbing and I’m nursing what I believe to be a cocktail of hangover and exhaustion.  It’s been 22 days and 220.4 miles since I’ve started this SOBO adventure and things are finally starting to come together. As is necessary of any blogger on the internet, I need to acknowledge my lack of blog posting early on, confront it, and try to recap everything that has happened in the last 3 weeks. I’ll try to break it up into bite sized chunks for y’all. 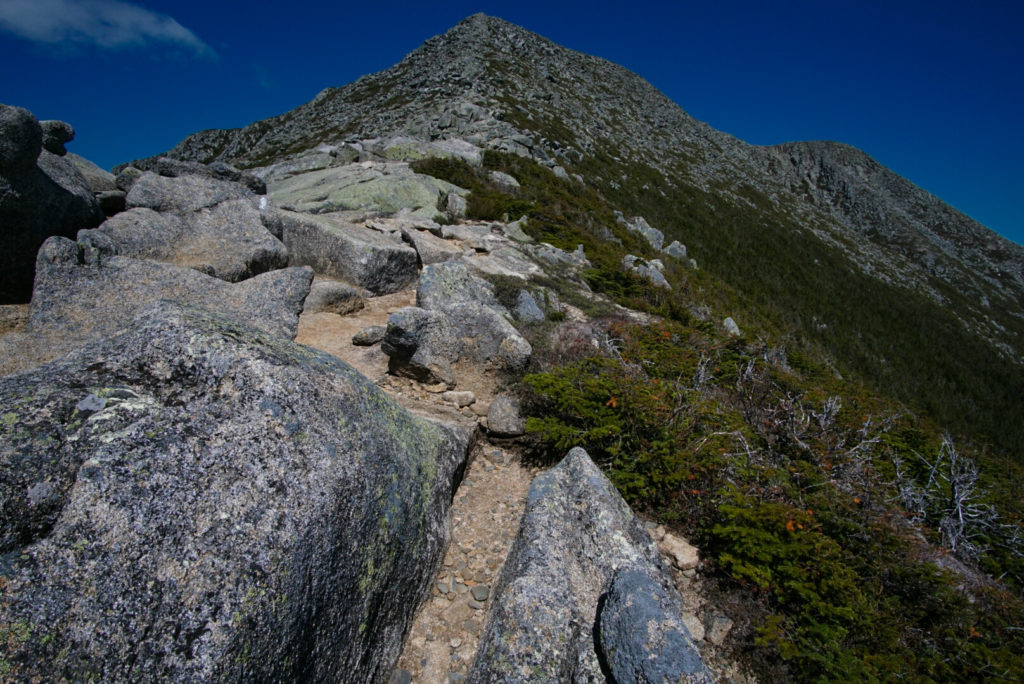 I still remember the 6 hour drive from Massachusetts to Maine. The amazing owners at The Appalachian Trail Lodge in Millinocket and the endless fountain of information from Old Man at the hostel, the night before a group of mostly clueless (and totally pain free) hikers began the biggest adventure of our lives.  “Plan on 8-10 hours and bring plenty of water” were the words that stuck. I was STOKED.

I won’t sit here and tell you it was easy. It was hard. Like the hardest thing I had done up to that point. Even with the day packs at the rangers station and the seemingly endless motivation around us from NOBOs finishing their hikes and SOBOs starting their hikes, an 8-10 hour day for a 10 mile round trip up and down the Hunt Trail became a 12 hour trek, ending with headlamps and hot food around a fire. But MAN was it fun.

Imagine that you’ve researched everything you can about backpacking, hiking and the Appalachian Trail for the past 8 months. Hundreds of dollars of gear and thousands of hours on the forums trying to figure out the perfect setup for OPTIMAL hiking. You plan 10 days of food for 118 miles, and plan on finishing earlier. You climb Katahdin and everything hurts. Then you head out past Abol Bridge into the longest stretch of Wilderness on the entire 2189.1 mile trail you are planning on conquering. Sounds awesome right? Throw in some rugged Maine trail, a dozen peaks and just as many river fords and it becomes significantly more extreme. And that pack you’ve been working on for the past year? If it’s not perfect you have 118 miles of hiking to learn how to deal with it before you can change anything. 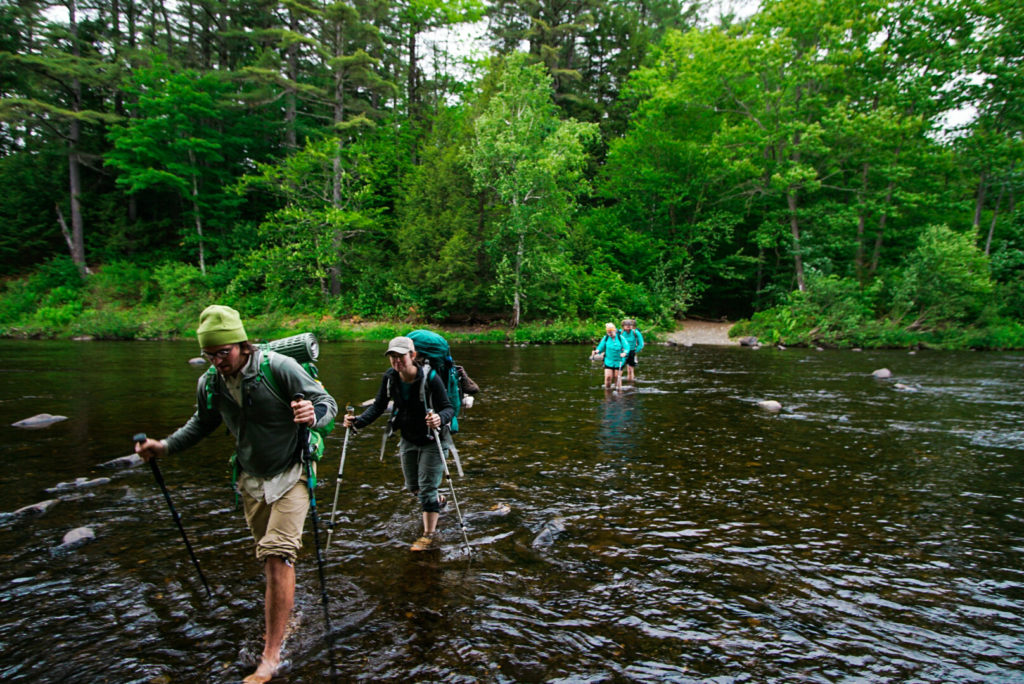 The 100 mile wilderness took our group of five a total of 9 days, 92 packets of tuna, a bottle of hot sauce and countless bruised knees and shins. It happened though. And walking out of the wilderness to a running van that would take us to the smallest town in the entire world (Monson, ME) was the greatest feeling in the world. Well, that might not top the enormous breakfast that was consumed at Pete’s Place immediately after, but it was a close second . 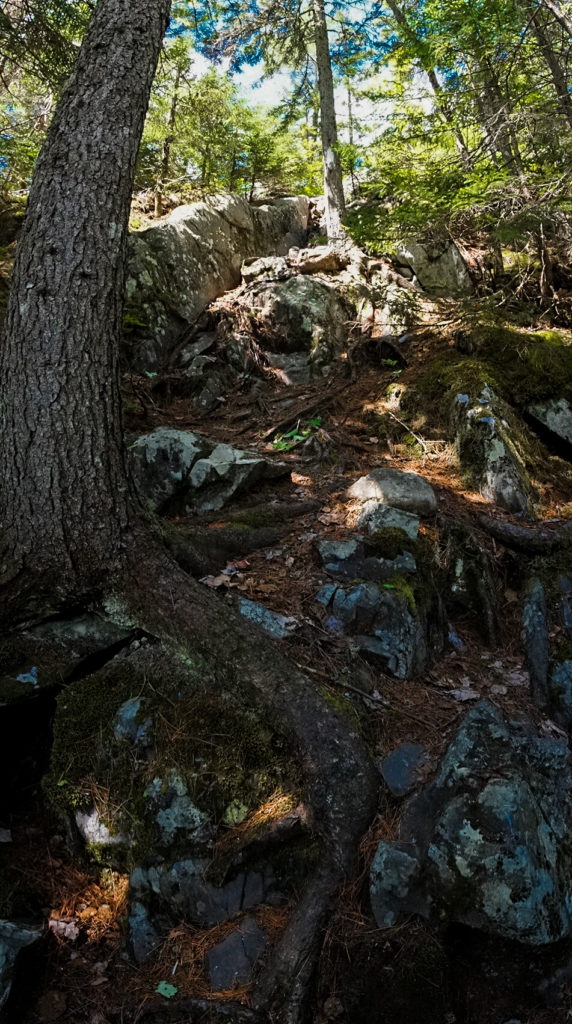 Every prospective thru-hiker hears about The Whites. Mount Washington the Presidential’s and the impossibly difficult work-for-stay in the region. It’s popular and often talked about with a mix of fear and excitement. After all, who wouldn’t find the thrill of climbing mountain after mountain amazing  and phenomenal? I’ll tell you who. A fresh, SOBO thru-hiker.Nobody told me the Maine is littered with 60 million boulders on the trail. No one mentioned the miles of walking root to root over mud bogs, attempting to keep my shoes dry, (and always failing) because the beloved Altra Lone Peaks do dry fast, but certainly not instantly.  But most importantly, no one told me about White Cap Mountain, The Bigelows, or the Saddleback range. And still ahead is the Mahoosuc range, including the Mahoosuc Notch (AWOL’s guide calls it the “most difficult or fun mile on the AT”) Then after that, Maine is done, and New Hampshire gets its turn to beat on my body too. Although Maine has the most beautiful scenery I’ve seen in my short 24 years on this Earth, it’s not free. Every root, rock and boulder scramble is necessary, and painfully slow.

Common belief is that SOBOs don’t get Trail Magic. Maybe that’s true. I’ve yet to receive a free soda, beer or candy bar from a stranger parked on the side of the trail. There have been no free burgers in the past 220 miles. I saw one plastic bag, tied to a tree labeled “Trail Magic”, but only full of trash. 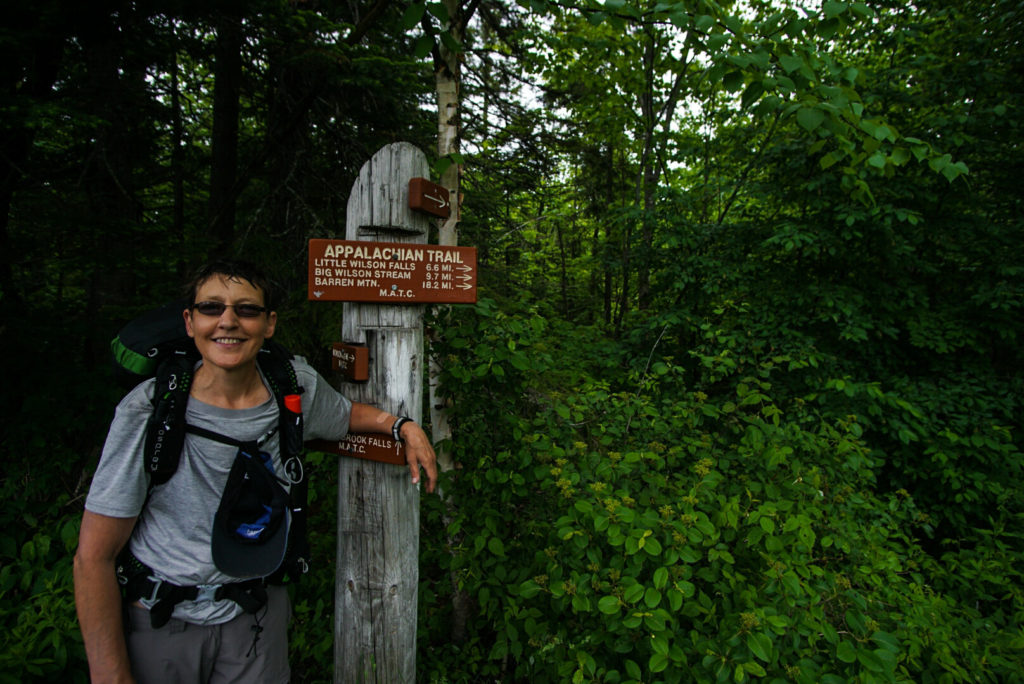 But there is trail magic. Meeting our trail aunt (Insect) and receiving a donation from her food bag (Which she referred to as “Walmart”) when we were hungry and under prepared in the 100 mile wilderness was nothing less than spectacular. A forecast full of daily, repetitive rain that didn’t manifest itself until our zero day was as welcome as could be. But we were even luckier than that.

Day 18. The Intrepid Five had become 7 over the Bigelow Mountain range. Our prospective goal for the day was a daunting 13 miles, up and over 3 mountain peaks. As per usual, our group had split into several smaller ones, based mostly on pace. Heather (Or Lavender as we call her) met a gentleman by the name of Toshi, out on a day hike. She spent the majority of the climb up Avery peak walking and talking with this man, and explained our joint journey to Georgia. The man became intrigued and fascinated by our adventure, and immediately offered to pick us up at the parking lot, drive us to where he was staying at the Mount Sugarloaf Ski Resort, and allow us to shower, do laundry and spent a night indoors with real beds. As any half-dead, mostly starved, aching and beat up hiker would, Lavender accepted, and Toshi followed up, extending the offer to all 7 of us. The 3 hikers that were with Lavender (HoneyBun, Petah and Fritz) also accepted, and began to hike to the road, 2 miles past our planned campsite.  I was in the back of the pack. Probably an hour behind the aforementioned group. Toshi then crossed paths with us, heading back down the mountain as we were heading up. He asked if my name was Jeremy, and explained what he had offered the other 4. We immediately accepted the offer, and I was then faced with the challenge of climbing, descending and hiking 9 more miles, up over three 4,000 foot peaks, in a short 4.5 hours. 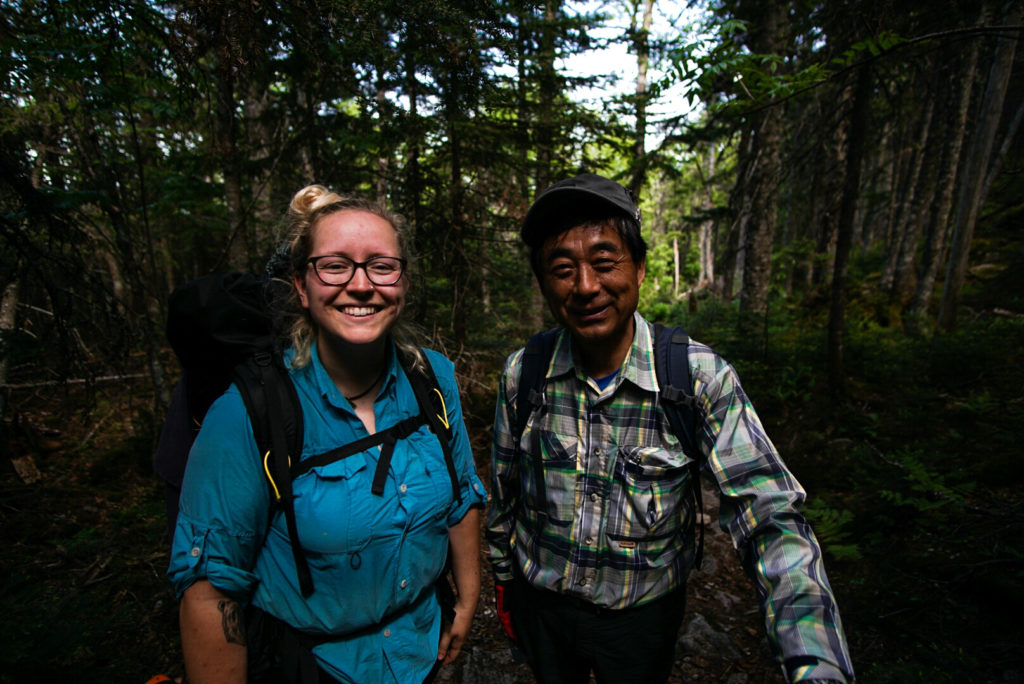 After the hardest climb I’ve ever done since Katahdin, meeting up with another friend (Zach), we arrived to the parking lot, where a large truck awaited us, along with our friends, and a smiling, extremely gracious Toshi. He sheltered us, brought us out to dinner, and shuttled us all to the supermarket for resupply. This Japanese trail angel then dropped us off at the trail head, just before he left for the airport, and his return trip to Japan.

“Are you hiking alone?”
I think back on this question and laugh. The AT is full of people. I was lucky to have had the opportunity to hike with 4 of the greatest people I’ve met in my entire life, and many others who I couldn’t possibly list in one post. I hiked with the same four people for almost 3 weeks straight. We laughed, cried, sang, drank and suffered together. Our mountain summits (even the ones that weren’t “proper”) were shared victories. Rolling into camp at 10:30 at night after a 16 mile day took every ounce of energy possible. But it was together, through perseverance and a little bit of crazy that we succeeded. I have no doubt that I will meet other amazing people on the trail who serve to push me and provide some spectacular camaraderie, but the first trail family is the one that will stick. The Intrepid Five as we were dubbed by our much wiser, more experienced trail aunt (Insect) has been divided for a number of reasons, from schedule differences to injuries. Trail family is forever. And there will be others without a doubt, but the first one is full of the ones who will forever remain friends, even across state lines and demographics. The ones who suffered through the first 200 miles of stupid hard terrain together. The ones who know exactly how to push eachothers buttons. The ones who jokingly gave me the trail name WhiteGurl and continued to laugh when it stuck 200 miles into the trail. Trail family is forever. 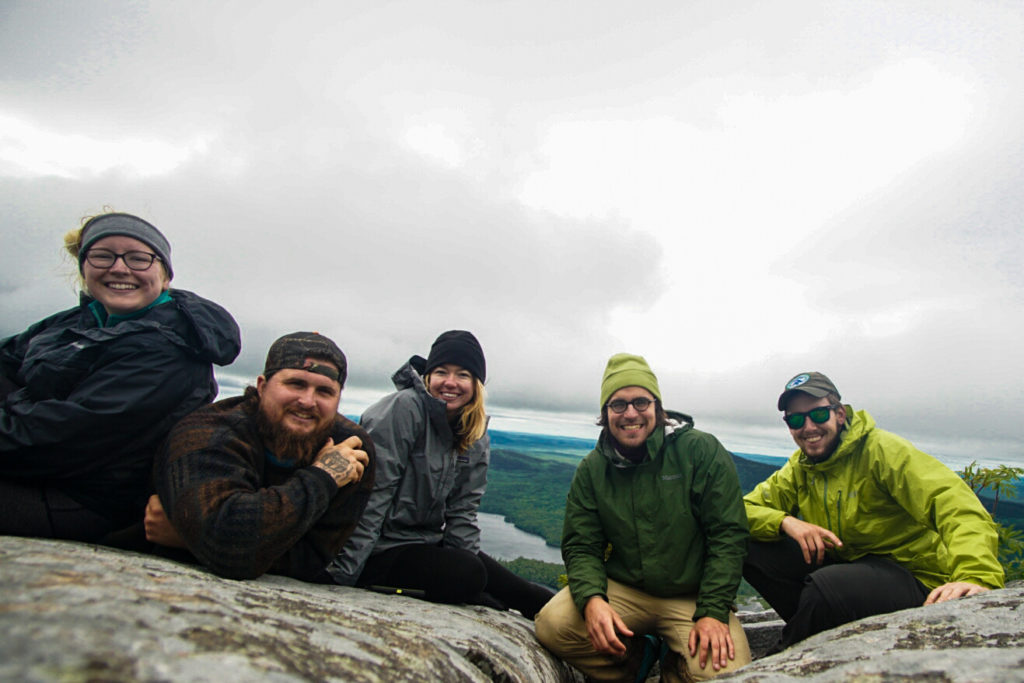 "A truly remarkable 23 year old Paramedic from Western Massachusetts" -USA Today "Jeremy has been totally successful in everything he's ever done, ever." -People Magazine "You're hiking the AT in one shot? Southbound? You're so neat!" -James Franco "I don't know who you are. Leave me alone. Take your latte and leave before I call the police." -Cashier at Starbucks Add me on Snapchat! Jeremy.Morris