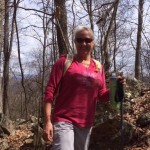 Major League … the Trail Name I gave myself after attending an Appalachian Trail thru hike program.

My daughter had named me BearMingo … Bear for Charlie ( my late husband) and Mingo for Flamingo for the beach girl that I am.  It was the perfect Trail Name for me … until I attended the program.

On the first evening of the program, as eight of us sat around the room, the person teaching the class asked us to answer three questions.  I listened to each person give their answers … none which were better, wiser, or any more experienced than the answers in my head.  Each received an understanding reply.  I was the last to answer.  I bravely explained my reason for wanting to hike the AT, my experience, and my fears.  Again, my answers were no different from the others.  The difference was in the support they received from the instructor verses his support to me … which was not there.

The instructor begin to give an analogy of T-ball to the Major League.  He didn’t stop there … he proceeded to drill this analogy home with the analogy continuing through school years, college and the Minor League … each time telling me no one goes straight from these levels to the Major League.  Hence my Trail Name … because I WAS GOING to do this!

An 85 year old (Grandma Gatewood), a blind man (Bill Irwin), an amputee (Scott Rogers), a 14 yr old (Neva Warren – solo) and a 5 year old boy with his parents did it … Why couldn’t I?  I have two close friends (Tim Pegram and Cathy Shouse)  that did it.  Why couldn’t I?  I’ve read countless pages of people’s trials and tribulations on the trail … I could do this.  Charlie, who had hiked some sections said I could do it.  I knew I could to!!

My one FEAR … those mountains.  I read that one man got all the way from GA to the Whites (mountains) about 2000 miles into his trek … and quit.  I didn’t want to do that … I needed to conquer the mountains first.

I attempted to summit Katahdin on June 5th via the Hunt Trail.  I hiked / climbed Mt. Katahdin to 4409 ft.  The last of the climb, referred to as the gateway, was to difficult for me.  So I didn’t make it to the plateau and across to the summit.  But I tried.

After hiking out of Baxter State Park (12.5 mi) and taking a zero day, I attempted it again.

The Abol Trail had a land slide a few years back and was rebuilt with switchbacks … sounded promising.  Abol Trail was a shorter hike, even more promising.  Everyone told me it was easier than the Hunt Trail, including the Park Ranger.

On June 8th, with renewed confidence, I again attempted to summit Katahdin via the Abol Trail.  It was a beautiful, clear, hot day.  What I discovered was a much steeper trail.  A trail less traveled so the footpath was not as well packed, loose pea-gravel allowed my foot to slip easily, loose rocks and roots made it even more cumbersome.  It was a more bouldering climb, which I did on already bruised and sore, knees and hands.  I was going to do this.  Several other hikers had passed me at this point, none of which had summited.  I was determined to not stop.  I had a 1/2 mile to the gateway and knew I had it!  I had a good cell signal so I posted pictures on FB and called two peope to say Hi.  I was so excited … I had this!  I kept climbing.  I reached a point that made me stop and look up, contemplating where to place my feet / hand next … where the next blaze was on the path.  At that moment a man, whom Sully (hiking parnter) dubbed Mountain Goat, appeard.  His comment to us was, “I wouldn’t go … I’m 6′ and I had a difficult time making it up.”  That was all I needed to hear.  I offered to pay for him to get me up to the top (I was serious).  He wouldn’t do it.  Mountain Man said that it was almost impossible for him to do it, so nope, not even for money.

So, like before, I made it to the gateway, and like before, I couldn’t get past that gate!  I sat down and cried.  With tears I descended Mt Katahdin.  Once we were back at the Rangers Station, we learned that of the eleven people that attempted to summit that day, only three were able.

The GPS showed that I climbed 4200 ft this time.  My daughter, Sarah, said looking at the topographical map it looked like I stopped at the same level on both trails.  Damn Gateway!!

To top it off … on the way down the mountain, my feet slipped (several times) on the pea-gravel.  On one of those slips my knee bent wrong.  I had to decend the rest of the way hobbling in pain.  I had a knife stabbing pain in the back of my right knee that radiates to the front of my knee cap and halfway down my leg.

So today, June 9th, I’m sitting in the Eastern Maine Medical Center Walk-in Clinic, Bangor, ME waiting for someone to take a look at my swollen knee.

I do know that if I can’t summit Katahdin, I’d never be able to climb the Whites.  Both would need to be accomplished to be able to say I hiked the entire AT.  So that’s out.

Two of the girls that took the AT class had started their trek and came off the trail for the class and to regroup.  So perhaps after regrouping I’ll section hike sans the climbs.

Or maybe I’ll go to the beach and drink a Bahama Mama!

No matter what I decide to do, I am happy with my attempts … it’s more than some people do in a life time.

I am in awe of those that triumphed without fear, standing straight up on that mountain side taking each boulder like a stair step.  I am even more so in awe of myself for how far I pushed myself, especially while fearful of those heights and ledges.

I am especially thankful for everyone that supported me in my quest.  The encouragement, words of wisdom, the faith you had in me gave me the push I needed.  I didn’t want do disappoint any of you.  I am not disappointed in myself … I hope you aren’t either.

I like adventure as much as I like fine dining.  I love variety and inhaling all that life has to offer.  This won’t deter me from trying other challengers.  If I don’t try it, how will I ever know, right!?!

All I know at this moment is my right knee is swollen and I’m down for the count for now.  We’ll see what tomorrow holds.

Final word … I have a partial Anterior Cruciate Ligament tear … brace and crutches for 2 weeks and then a visit to my regular doctor for a re-check.

Hi, I'm Major League (aka Suzanne). I am a 2017 SOBO Appalachian Trail Thru Hiker. I'll begin my journey on June 5th.