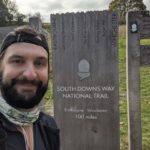 Making Mountains Out of Molehills – The Whites Can’t be That Hard, Right?

I was getting bored of hiking every day. The mid-Atlantic States were hot, and often without any mountains or views, though I still loved hanging by the rivers, streams, and lakes. The camping experience has always been enjoyable, especially with such an amazing tramily. 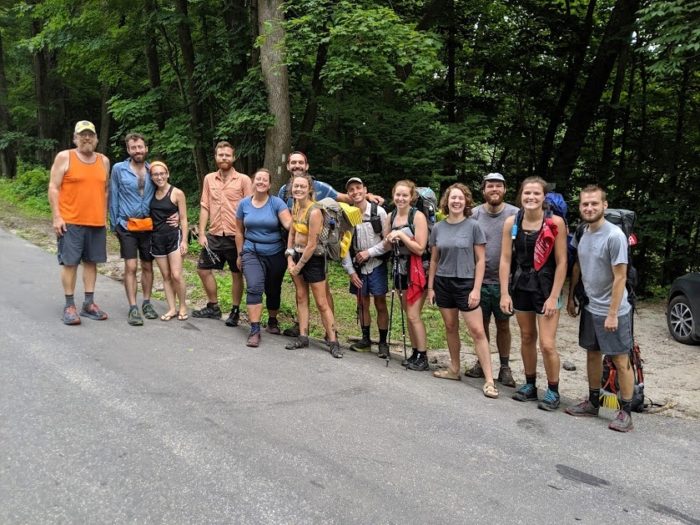 The Sauce near Kent, CT.

We were deep in Lyme territory, with mounting mosquito bites to itch as we made our way along the trail. The trail itself wasn’t bad, but with the miles quickly adding up and a significant portion of the trail left, one couldn’t help but feel they’re just going through the motions.

A New England State of Mind

New England reignited my passion. The change began in northern Massachusetts with Mount Greylock, the highest peak of the state. We had half the climb under our belts after camping at the Mark Noepel Shelter and an early start that next morning had everyone quickly at the summit, with its impressive tower. At long last, the stunning views had returned. At 3,491 feet, we were finally able to feel small amont our surroundings after so many flat miles in the green tunnel. 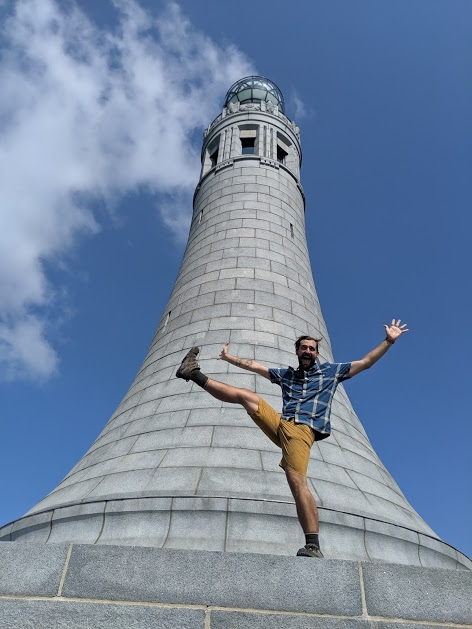 A celebration at the Mount Greylock tower.

Vermont arrived quickly as we joined the Long Trail, which spans Vermont to the Canadian border. The first 105 miles of this trail are shared with the AT. Vermont is colloquially known to hikers as Vermud for the deep-pack snow of the harsh winter that continues to provide ample moisture to the ground well into August. That said, we had warm and dry weather that kept our feet relatively dry and mud free.

It wasn’t long before we were met with the mountain-a-day terrain that began to build our mountain legs back up in advance of what was to come. What was even more special was that after months of barely hiking at any altitude these summits were regularly in the 3,000 to 4,000 feet range. First was Glastenbury Mountain, which we summited in cloud cover, but the tower provided a view over the somewhat creepy pine forest below. 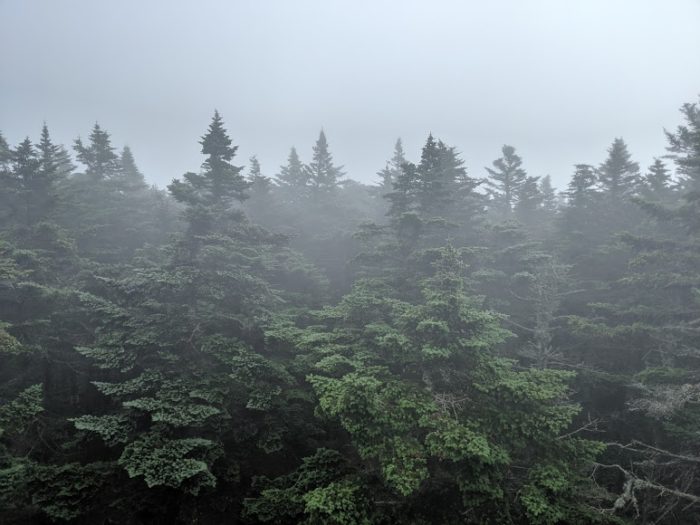 Views of the eerie pine forest from the Glastenbury fire tower.

Stratton Mountain was next, with the most passionate caretaker I have met. She took the time to show Bubbles how she kept her food cool using only the ground around her. The fire tower was impeccably maintained and provided some much-needed geographical perspective. 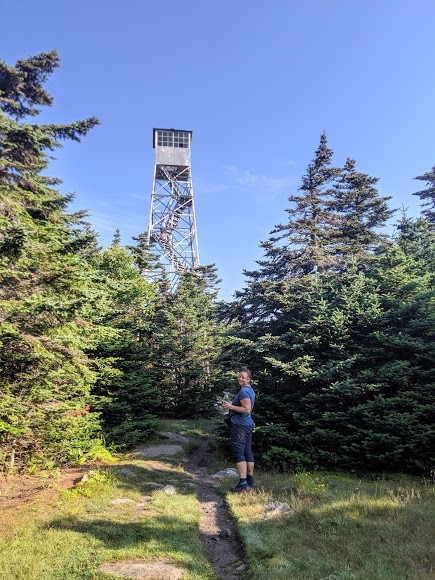 Bromley Mountain was the third of the trio before we began making our way to the most challenging peak of Vermont—Killington. Bromley peak was also a ski resort and we took the opportunity to take a few photos on the “hammock”—a safety net below the dormant chairlift. 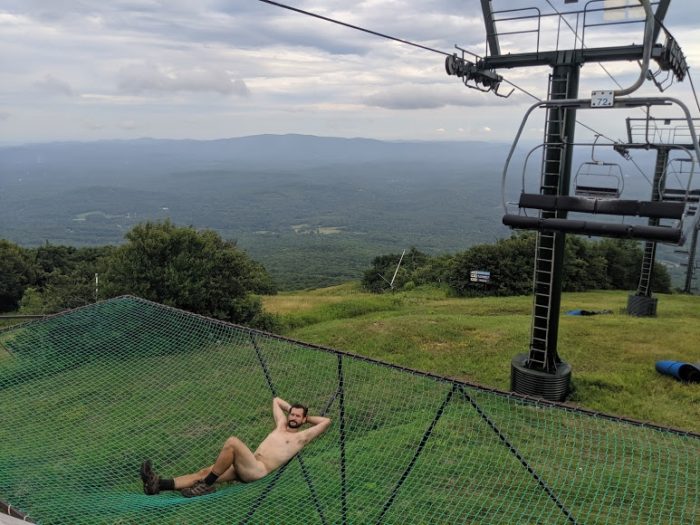 Views from Mount Bromley and the “hammock.”

Due to some misinformation from a Long Trail hiker—who had mentioned we could ride from the summit at Killington to Rutland—we had a 21-mile day going up and over this beast of a mountain. The terrain itself was nothing out of the ordinary, but the ascent went on for almost nine miles. My body was not used to this, and as the last member of the tramily to arrive at the lunch spot, I could see we were all exhausted. It worked us all very hard. The one photo I took of this mountain was the 500 miles to Katahdin sign; a significant moment that marked the final countdown. 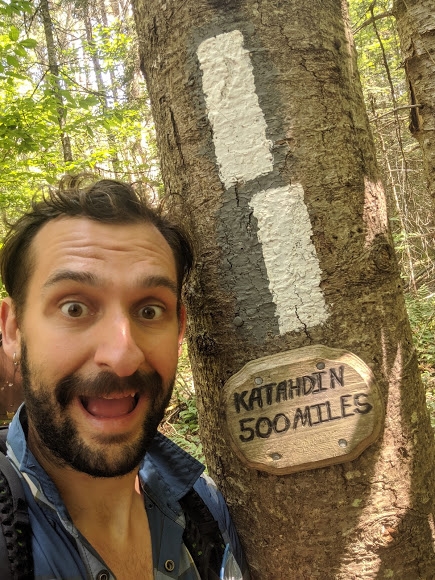 After a long, but thankfully less exhausting descent, we arrived in Rutland for a night of relaxation and snacks. There was a farmers market and a wonderful cafe with vegan goodies that revitalized our spirits. 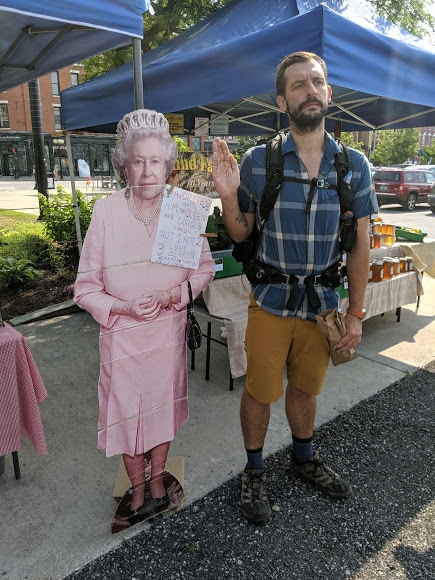 HRH Queen Elizabeth II popped into Rutland, VT, to wish me well on my journey.

The next day, we left the Long Trail and took a hard right to bridge the gap between Killington and New Hampshire. In true AT style, we spent the next few days going over countless south to north aligned ridges. The altitude was not high and the climbs alone were not tough, but this was some serious training. It turned out to be a great boot camp for what was to come. The views were also in great contrast to the previous mountains we had crossed. Leaving Vermont filled me with joy, but also sadness; I had really enjoyed this section of the trail. 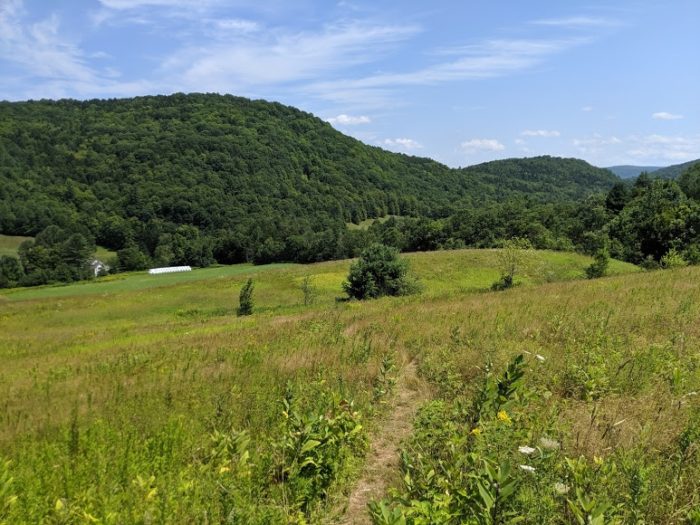 Perhaps I shall revisit the Long Trail in due course.

Crossing into New Hampshire was tough, as OB went home to get treatment for suspected Lyme and we were all worried about him. With the help of some good ol’ Doxy, he made a swift recovery and was in good spirits when his family collected us for Beach Days (see previous blog entry.) I also turned 30 as we left Hanover, NH, and so was full of thoughts and feelings on what I’d achieved so far on this hike. 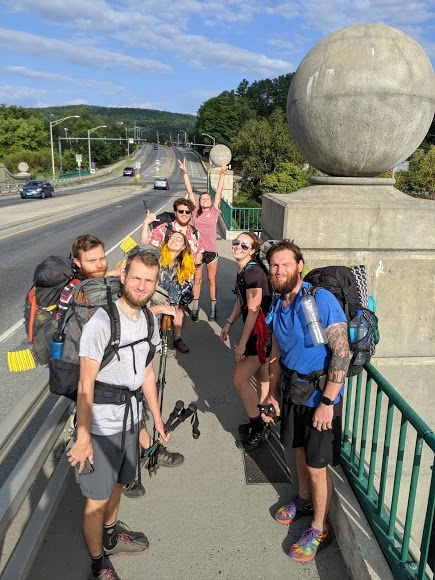 The Sauce celebrating their arrival to New Hampshire.

When we returned from the relaxing weekend on the Maine coast, The Sauce began our assault of the Whites in earnest. We were fortunate for dry weather and no thunderstorms over the first portion of our trip. This didn’t stop us from fighting against wet rocks from morning condensation, as well as springs that took the easiest route down the mountains—the trail. Moosilauke was our first peak, where we were reunited with Ghost. As a fellow vegan, we often kept touch about food finds along the trail. Luckily, he was also very close with the rest of the group, most of whom he had met several times before back in Virginia. 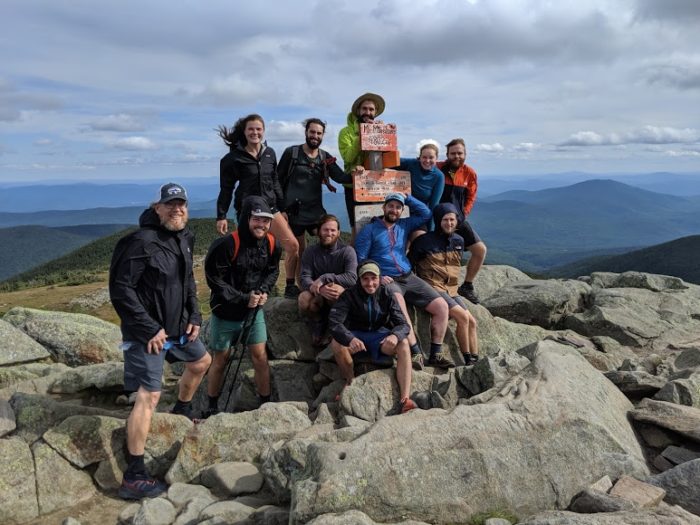 The next few days were tough days due to our ambitious schedule; 15 miles here was much more exhausting than any of my longest days prior to this. My 24-mile record day felt like a gentle walk in the park with friends compared to the aggressive and rocky traverses of the New Hampshire’s White Mountains. What kept us motivated were the outstanding views; Franconia Ridge is a wonder to see with your own eyes. 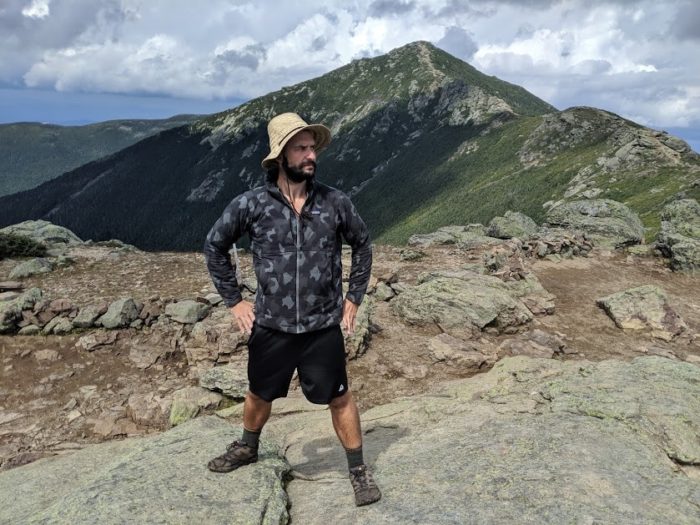 We worked our way from Mount Lincoln to the Lake of the Clouds Hut. Here you can sleep on the dining room floor for a small fee, as the weather on Mount Washington. The next morning we were ready, yet nervous to ascend Mount Washington—the highest peak in the north on the AT. 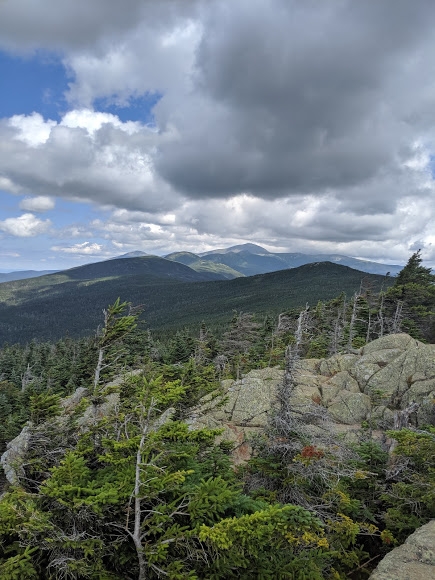 The Presidentials all in a long line to Mount Washington.

The Washington summit was tough, though the feeling of triumph was wonderful. We celebrated with snacks from the gift shop, with some of the group scarfing down 920-calorie whoopie pies! 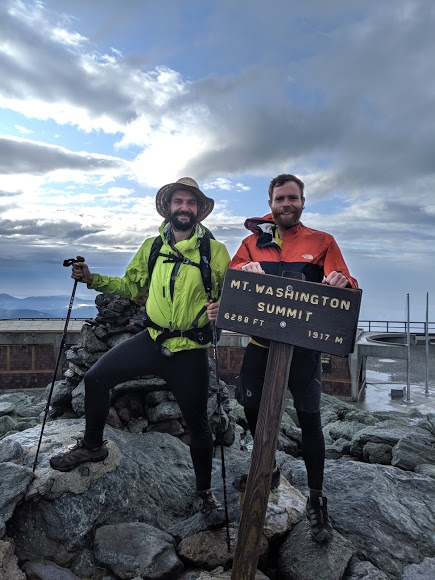 From there, the trail descended into chaos. There are few white blazes to be seen on these historic trails. In their place were stone cairns that signaled every main and side trail. We managed to get lost briefly after following an unmarked side trail, before doubling back and correcting our course.

Madison Hut, like the others, is a nice respite from the cold weather. We ate lunch, augmented by a bowl or two of soup from the hut “cafe.” Mount Madison loomed over this hut, and made for a short but intense climb. With Gorham only hours away, we conquered it with gusto and enthusiasm from the promise of heading to town. 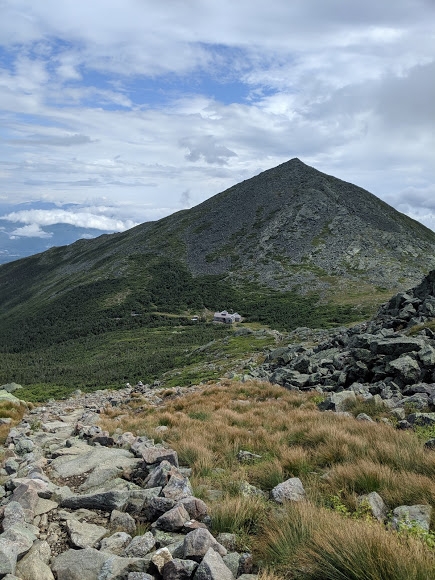 Well fed, and rested from our night at the Barn Hostel in Gorham, the Sauce returned to the trail. There were 21 miles of the Whites remaining, including Wildcat Mountain. We finished the day early due to the only bout of bad weather, with a fairly loud, albeit brief, thunderstorm. 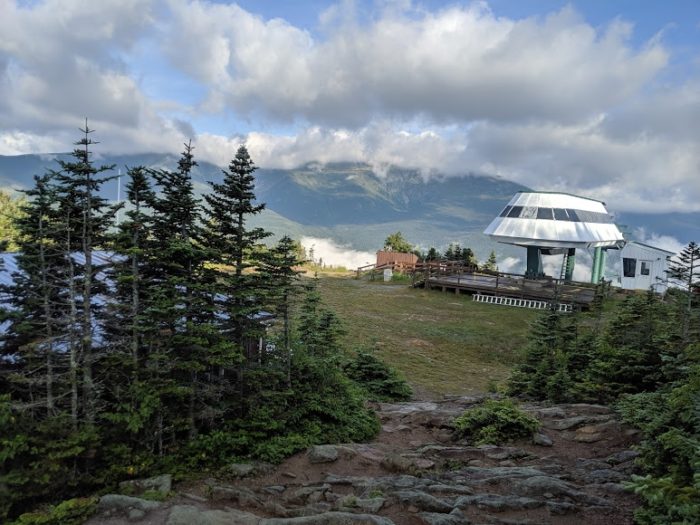 At last, we had survived the Whites.

Many parts of the trail are well-marked. 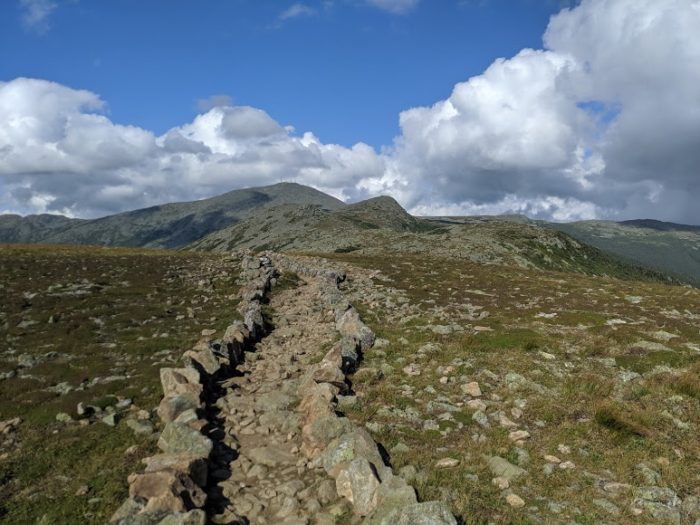 A well-defined portion of trail. 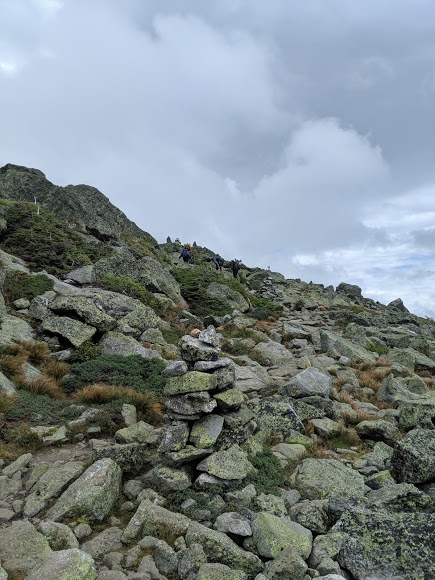 Some parts are beautifully flat. Others cause cries and sighs at the outrageous scrambling required. 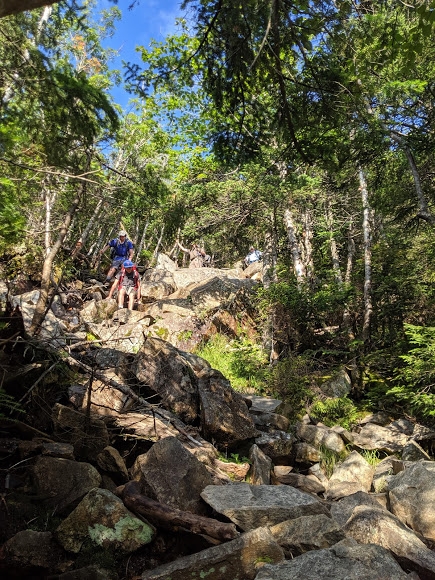 The Sauce and I had our passion for the trail reignited by the Whites. They challenged us to our very core physically and mentally. They also reward you with sights untold, and the deep set feeling of wonder. 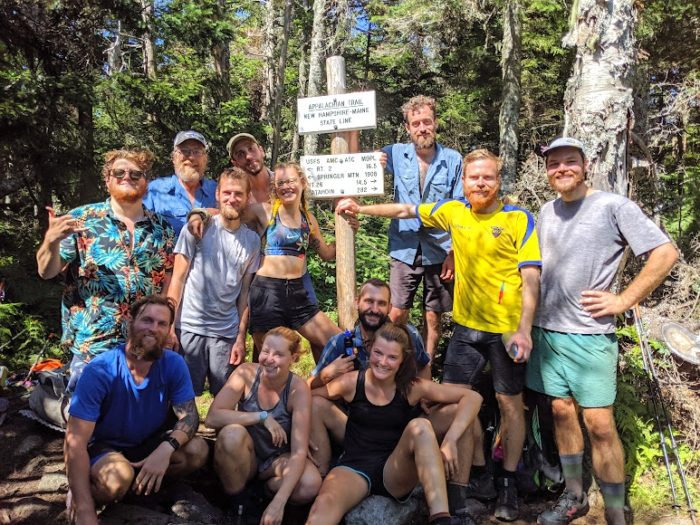 The Sauce at the NH/ME state line.

Onward to our final state: Maine.

Coming to a Trail Town near you soon! (Wear a mask. 2m apart) My name is Aidan/ Showstopper; I'm a 31 year old British guy from a town called Abingdon, who is struggling to recapture the adventures of an Appalachian Trail Thru Hike in 2019 by traversing the trails a little closer to home. Crushed by the mundanity of accounts assistant work, filled out with a covid cushion of inactivity, counting the days to safely hike again.