The Man Behind the Claimed AT FKT: Dan “Knotts” Binde

Dan “Knotts” Binde claims to have set the self-supported AT speed record on July 19th. After his SPOT device broke on him, he struggled to confirm the record. FKT judges are compiling evidence to get to the bottom of his claim. I took the opportunity to sit down with him and get inside his head for before he set off for the Sierras to complete his calendar year triple.

Q: When did you first get into thru-hiking?

A: I hiked the PCT and the AT in 2015. For 6-7 years leading up to thru-hiking, I spent a lot of time in Glacier National Park, where I met a guy who had just finished the PCT.  I looked it up, saw the snow-covered Sierra, and was like WOAH. That looks crazy and dangerous, which is awesome.

Q: How has thru-hiking changed you?

A: It hasn’t changed me too much. I’ve just always been “go with the flow.” I’m pretty laid back. Hiking at whatever times. Punches get thrown. I take it day by day. 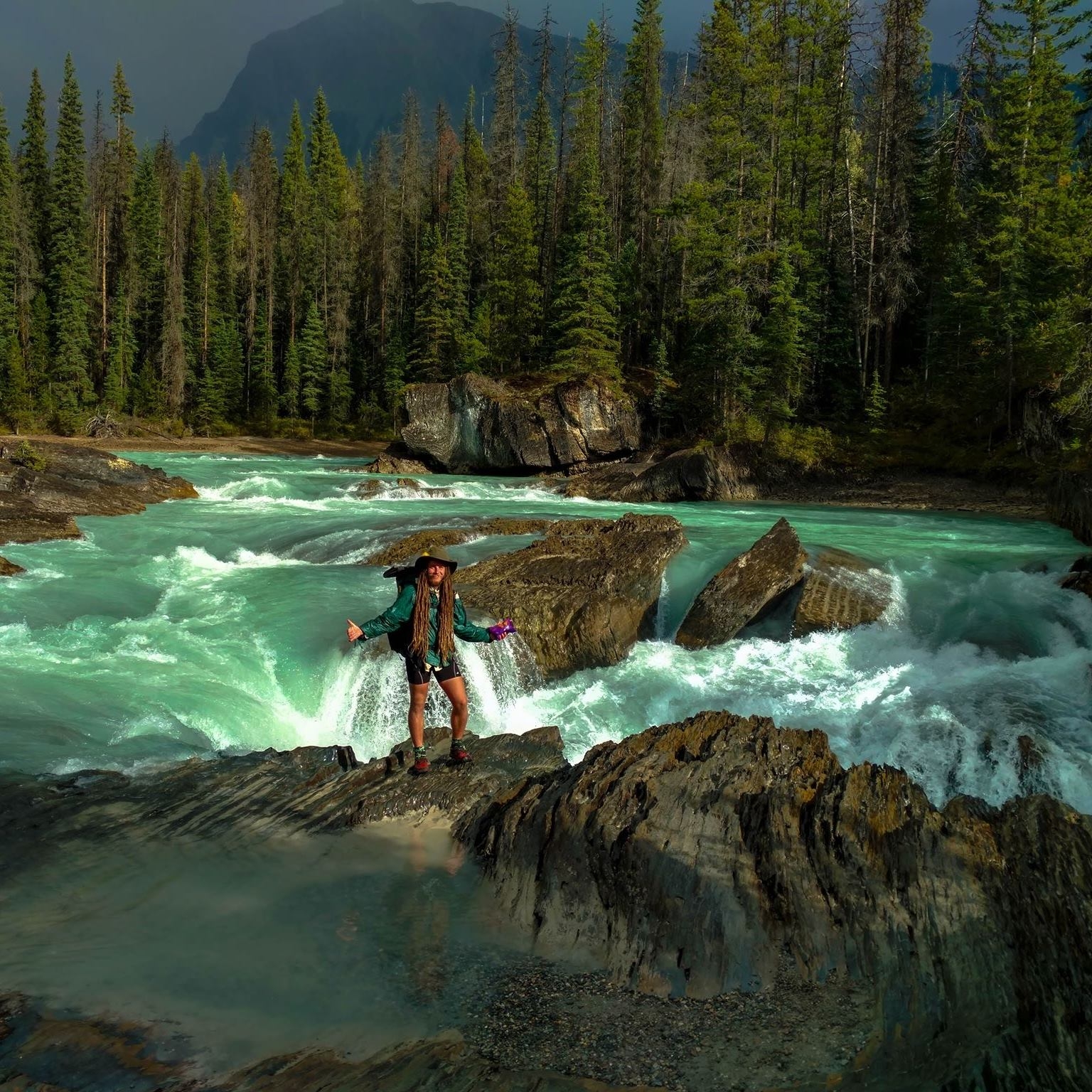 Q: Why do you think you do it? The summits? The journey? The people?

A: Like everyone says, it’s definitely the people. But the experience is also really cool. And there are a lot of people who would love to do a hike but never get the experience because of health conditions or money. Stuff like that keeps me going.

I also get a real thrill doing other trails like the great divide in Canada. I got lost one time and was like, “woah this is so cool. I might be the only person who has ever been in this spot. Now I need to find the trail before I die”.

Q: You’ve mentioned there are things you’d do differently. What would you change?

A: Not having my electronics run out of battery. And also, I would try out metatarsal pads before I was on the speed hike. They affected my feet like crazy. And I’d get more sleep between when I was on the PCT and when I started the AT.

A: Totally different than a normal thru-hike. I kinda wanted a set base weight. But I didn’t want to get sick of my stuff. I ate a lot of instant rice and dehydrated turkey hamburger. I cold soaked that, which is horrible after two weeks. And Clif Bars. My body wasn’t even taking the nutrients.

A: I carried right around 5.5 lbs with my electronics. At the end, I didn’t have any of my electronics so it was under 5lbs without food and water. I wanted to do it as cheaply as possible. So I got a $20 Walmart pack. A $5 Walmart fleece blanket. A Therm-a-Rest that I got out of a hiker box.

My Clothes: *laughs* One brief. Two socks. Walmart shirt. Helium II. Frogg Togg. There were multiple times when there were hypothermic conditions. Whenever I couldn’t sleep because I was so cold, I’d just hike. 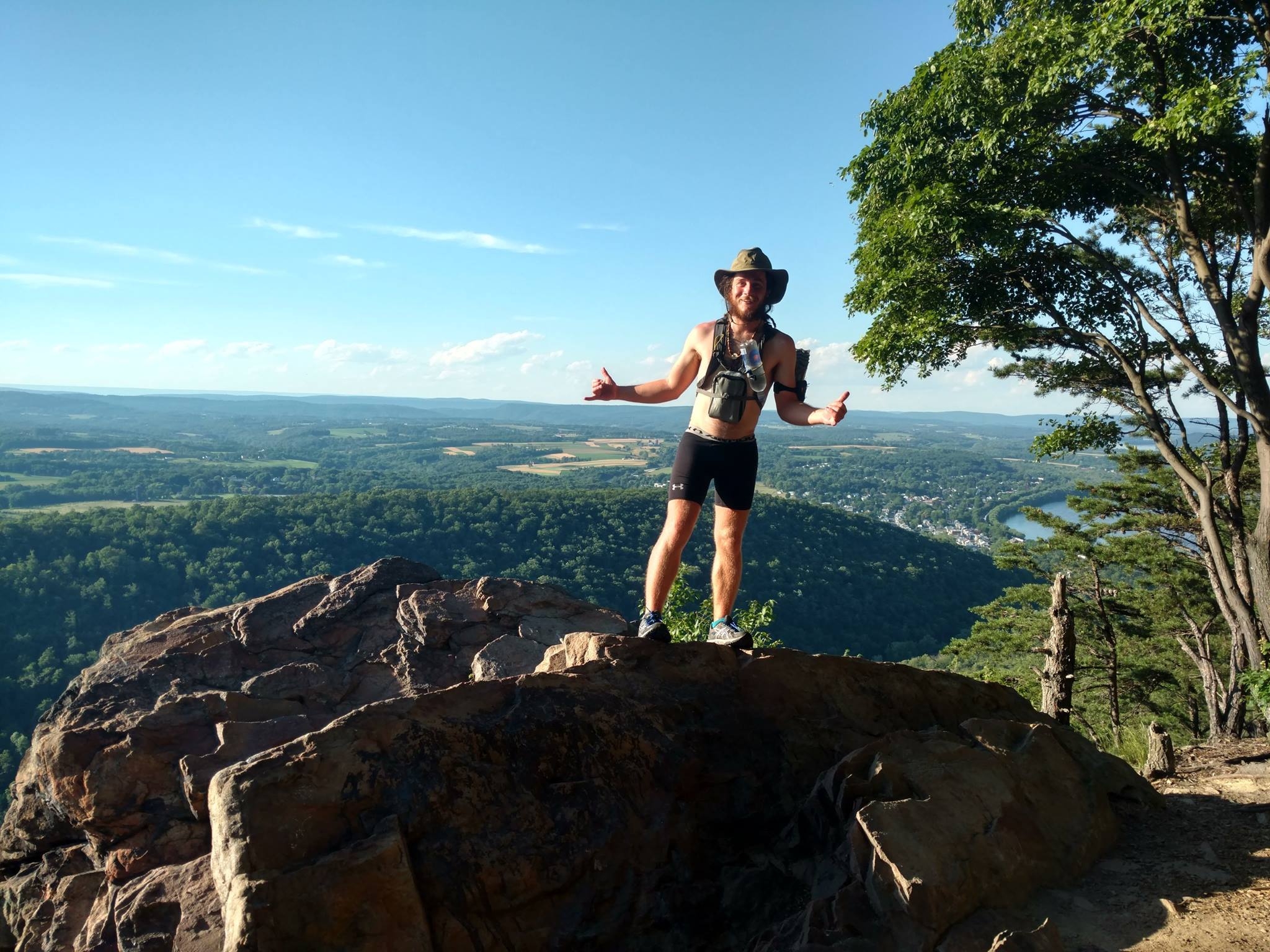 Q: How much sleep did you average?

A: Usually I shot for 18 hours of hiking. Sometimes it turned into 19 if I need to get to town to charge electronics.

Q: How did you change your setup for the FKT versus a typical thru-hike?

A: Normally my base is even heavier than most people. It’s usually around 16 pounds, but I carry my stuff for all four seasons. I never sending stuff back home, so I can just keep hiking and not think about the seasons.

Q: What made you want to go for the AT FKT?

A: I knew it would definitely be a challenge. I thought I could do it if I didn’t get injured. I wanted to push myself a little more to the extreme. And I kind of wanted to get into trail running. I want to make it into a career. 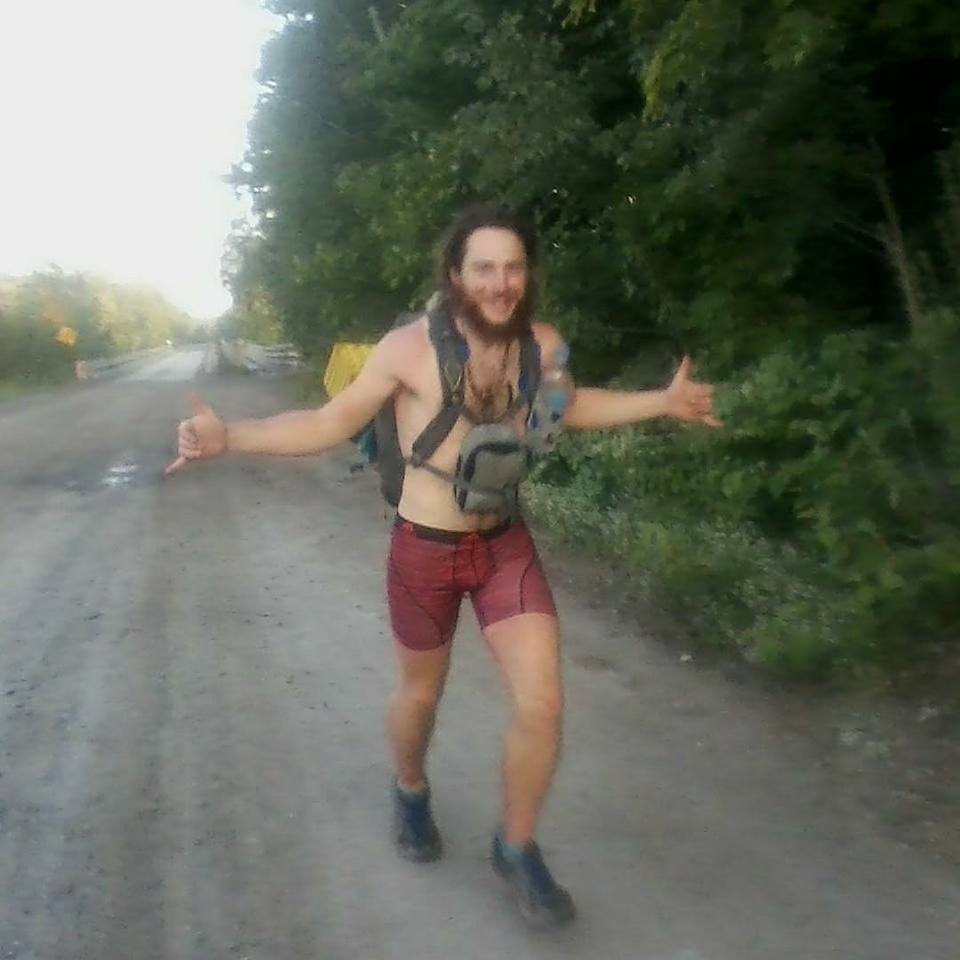 Knotts running over Abol Bridge (AT 2017)

Q: What was it like hiking with an infected toe for so long?

A: There were multiple times when I thought I was done. Pretty much right when It happened, I thought I might not make it. I kicked a rock in the Grayson highlands. And it was already infected by the time I got to camp. After airing it out it was better.

One of my buddies hiked in sandals and told me to use liquid bandage. It slowed my pace down a lot.  The nerves were out of control. But I got used to the pain. It’s kinda like normal thru-hiking but a little more extreme. You get used to it eventually.

Then I was on top of on Mt. Washington. I took a nap in the basement. I didn’t have an alarm clock, so I was asking people to wake me up. I had my liquid bandage on the table. When I woke up, I hit it off the table and it shattered. I thought: Well my hike might be over. This is it.  I made it to Pinkham Notch that night, and a section hiker happened to walk by at 9pm, and he happened to have a full bottle that he gave me. What are the odds? 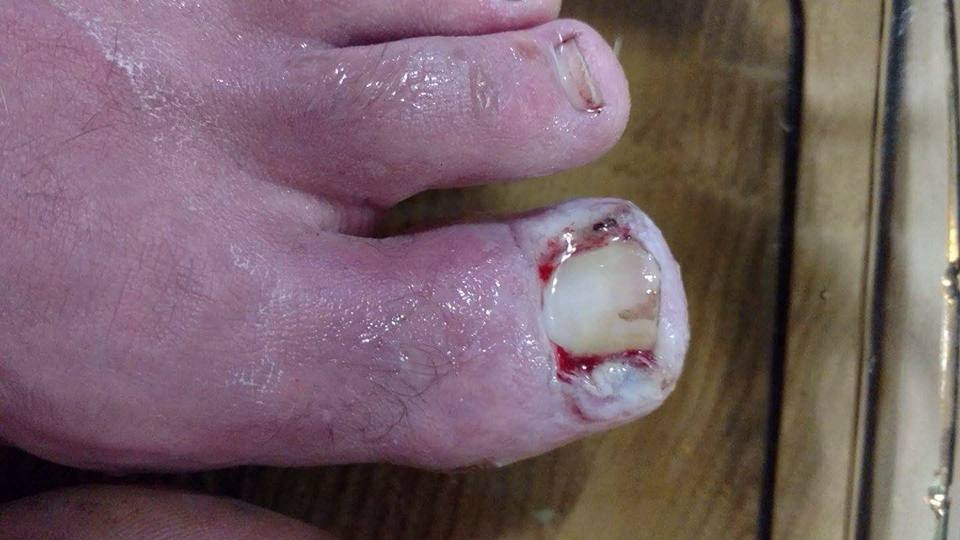 Q: What other sorts of challenges did you deal with? Hypothermia? Sickness? Your SPOT device obviously.

A: I carried an emergency bivy sack. So I thought, Ok I won’t die with this gear. I thought it was going to work. But it wasn’t the right setup and I didn’t have any experience with bivies…. so it was a big curve ball. I would sweat for an hour, and then it’d get cold. And it turned it into hypothermic conditions.

And for the first time in my life I couldn’t count on my legs. They’d cramp up or collapse in the Whites going down super steep stuff.

Q: Did you ever think about bailing?

A: All the time. A lot more than I ever thought I would. My buddies from the PCT were like “dude you cant quit.” Kinda kept me rolling. Night hiking was so brutal. I thought about quitting at least once a night. A couple dozen serious times. Then I stopped doing a lot of night hiking and it wasn’t as bad.

Q: Was your experience what you expected it to be like? Was it harder or easier than you thought it’d be?

A: Maybe a little bit harder. I knew it was gonna be hard. But my feet held up. I was mainly worried about my Achilles and the tendons behind my knees. If they held up I knew id have a good shot.

Q: How has the response to your FKT been? Frustrating? Positive? Haters and believers? Does that matter to you?

A: Yes and no. It’s a little frustrating. I don’t want think about it anymore. I didn’t really think about how to come out and claim everything. But I was planning to do it differently. And it kind of leaked out early. I was going to have all my peas in a row in one post, but that didn’t really happen. Social media is going to be harsh. I was expecting that after last year. After the GDT.

Q: Tell me about what motivated you on the bad days. Why did you keep going?

A: I was just rolling high. I had rough nights. Night hiking and whatnot. I made it to Damascus in ten days. My sisters told me I’m crazy for doing 44 miles per day so early on, but I had music to distract myself and keep me going. 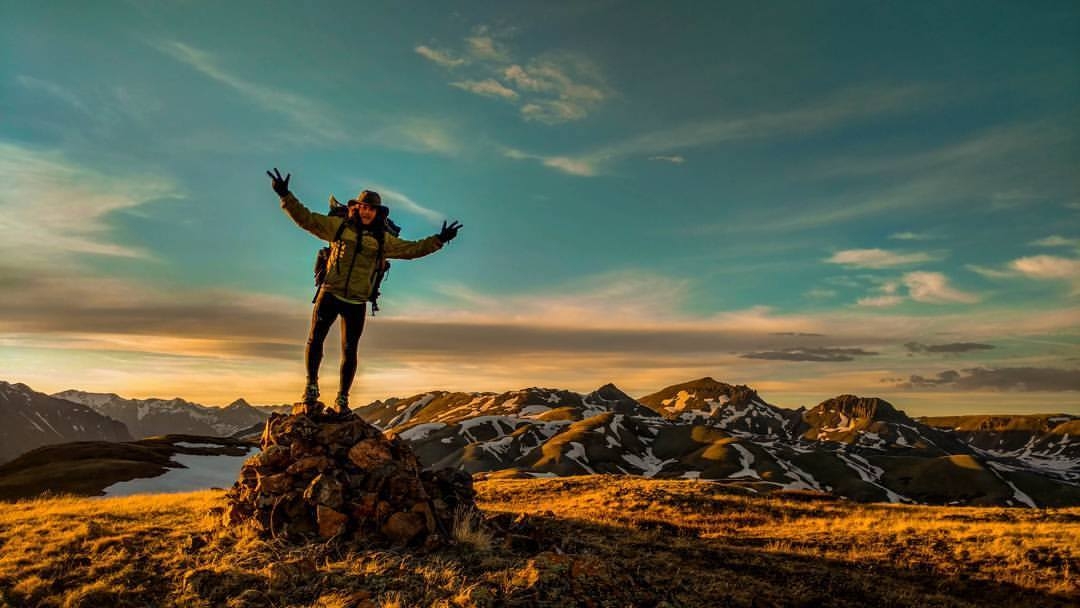 Q: What do your loved ones think about your hiking excursions?

A: At the start they thought I was crazy. But they think its normal now. I have six older sisters, and they broke my parents in.

Q: Is there anything in particular you want to share with the world?

A: Anyone can thru-hike. Its all mental. You just have to get out and do it. There are so many places that no one checks out. Overnights or dayhikes. There’s too much tv. It’s too negative. I’m always trying to inspire people to get outside. I haven’t really done too many talks in the area but I want to. 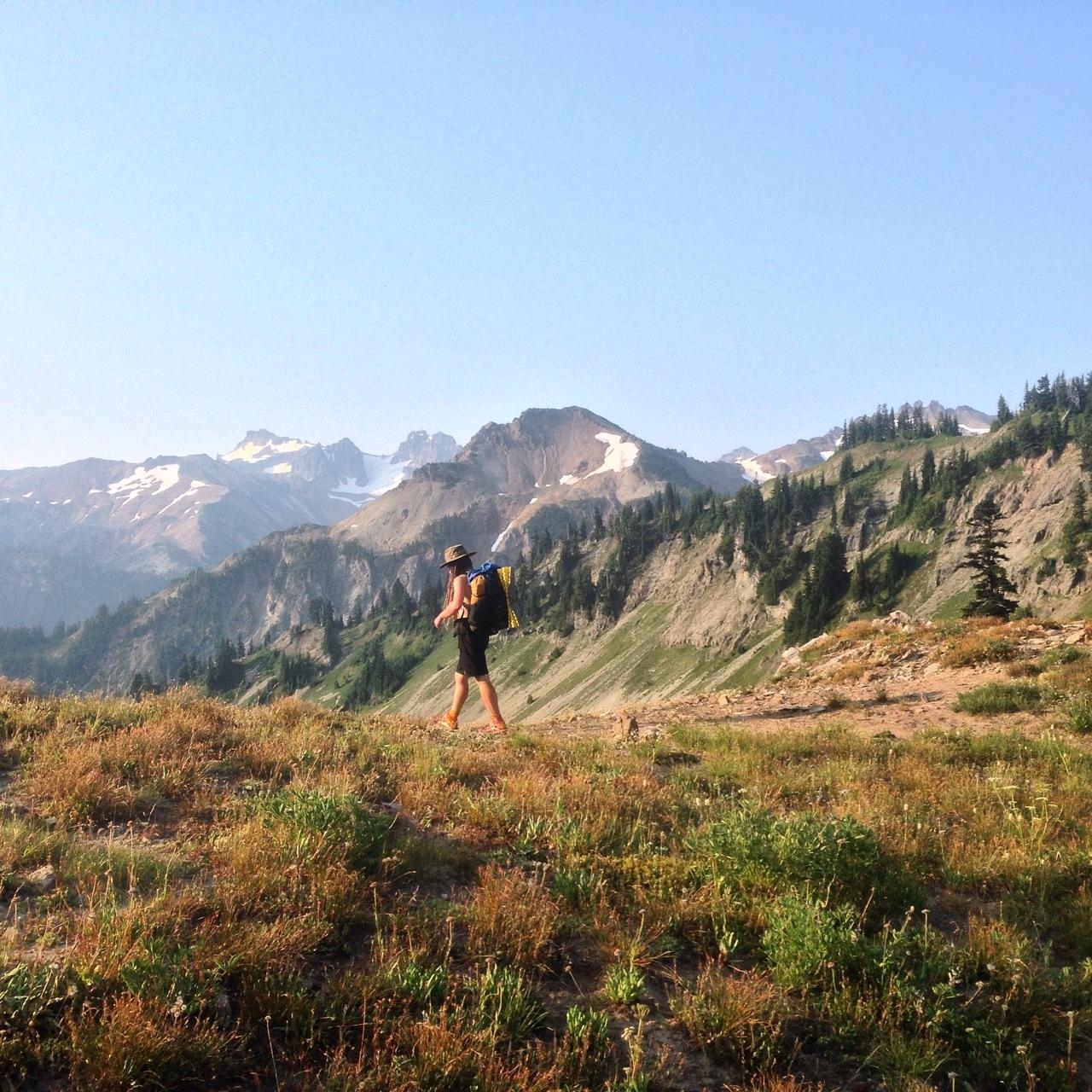