Marble and Birch: Into the Green Mountains

In the past week, I’ve traveled north through the Berkshires and up into Vermont. The terrain is rolling higher, with 3000-foot plateaux and peaks pushing up towards 4000 for the first time since Virginia. The highlands host a landscape that belongs entirely to the north, full of beaver ponds and fir trees and papery-white birches. Down in Massachusetts there were valleys of marble, packed with towns and farms and houses. Up here there’s nothing but forest and hills and streams trickling out of bogs. I may still have a long way left to walk, but I’ve reached the boreal wilderness.

The first few miles out of Great Barrington were all uphill. I was climbing east from the valley into the Berkshire Hills, which I expected to be a range of steep rolling hills matching the Taconics to the west. But once I reached the top, the land flattened out. The Berkshires were not really hills at all, but a high plateau. 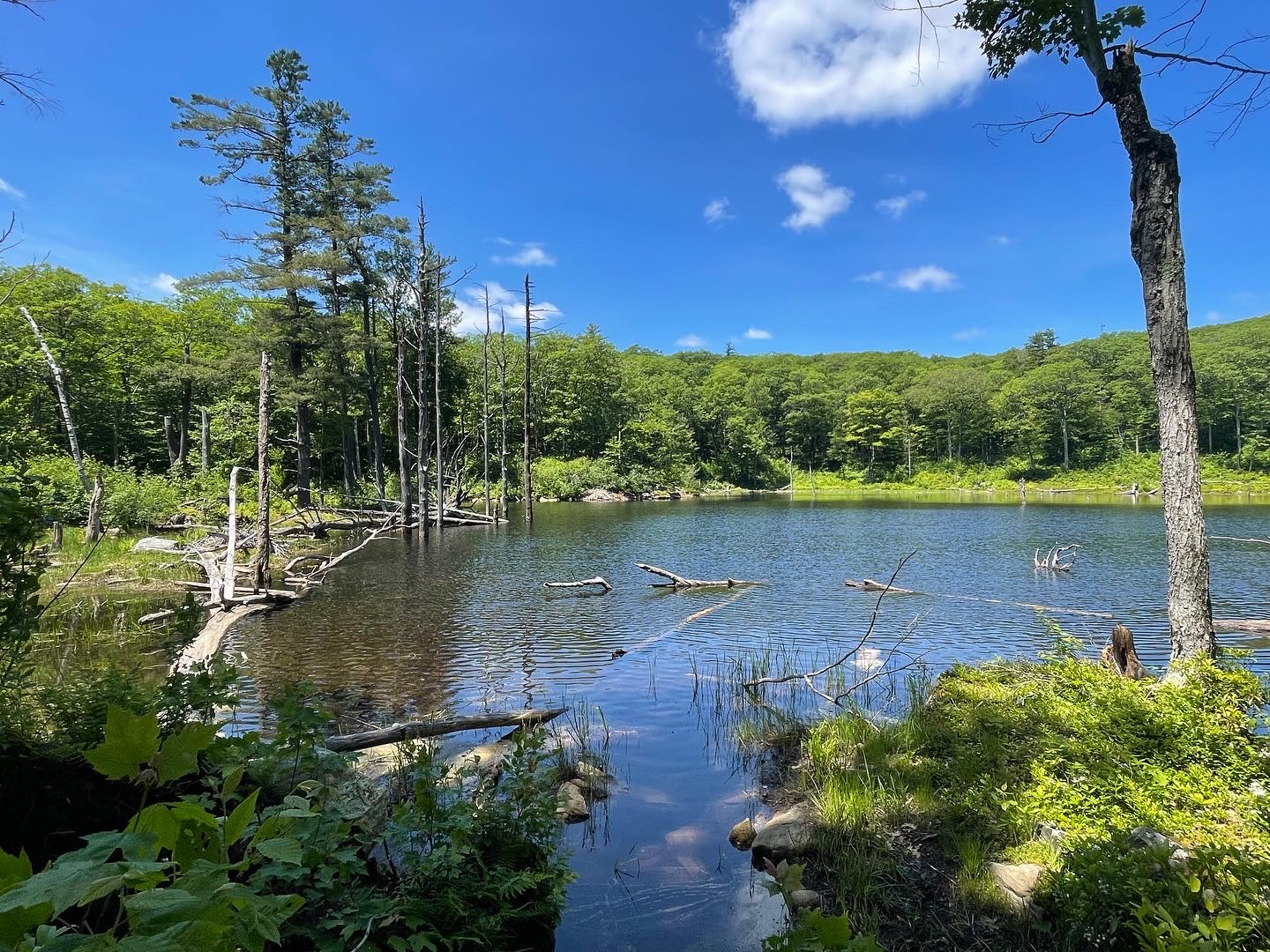 A bog in the Berkshires.

The land immediately reminded me of the Poconos, that little slice of Canada in Pennsylvania. I saw some boreal flowers for the first time on the trail, like Clintonia (blue-bead lily) and bunchberry. Bunchberry is a fascinating little plant, a kind of dogwood that only grows as a wildflower. It has a ‘circumpolar’ distribution, growing in the far northern forests of both America and Asia. That single white flower low to the ground was a sure sign I’d arrived in the north country. 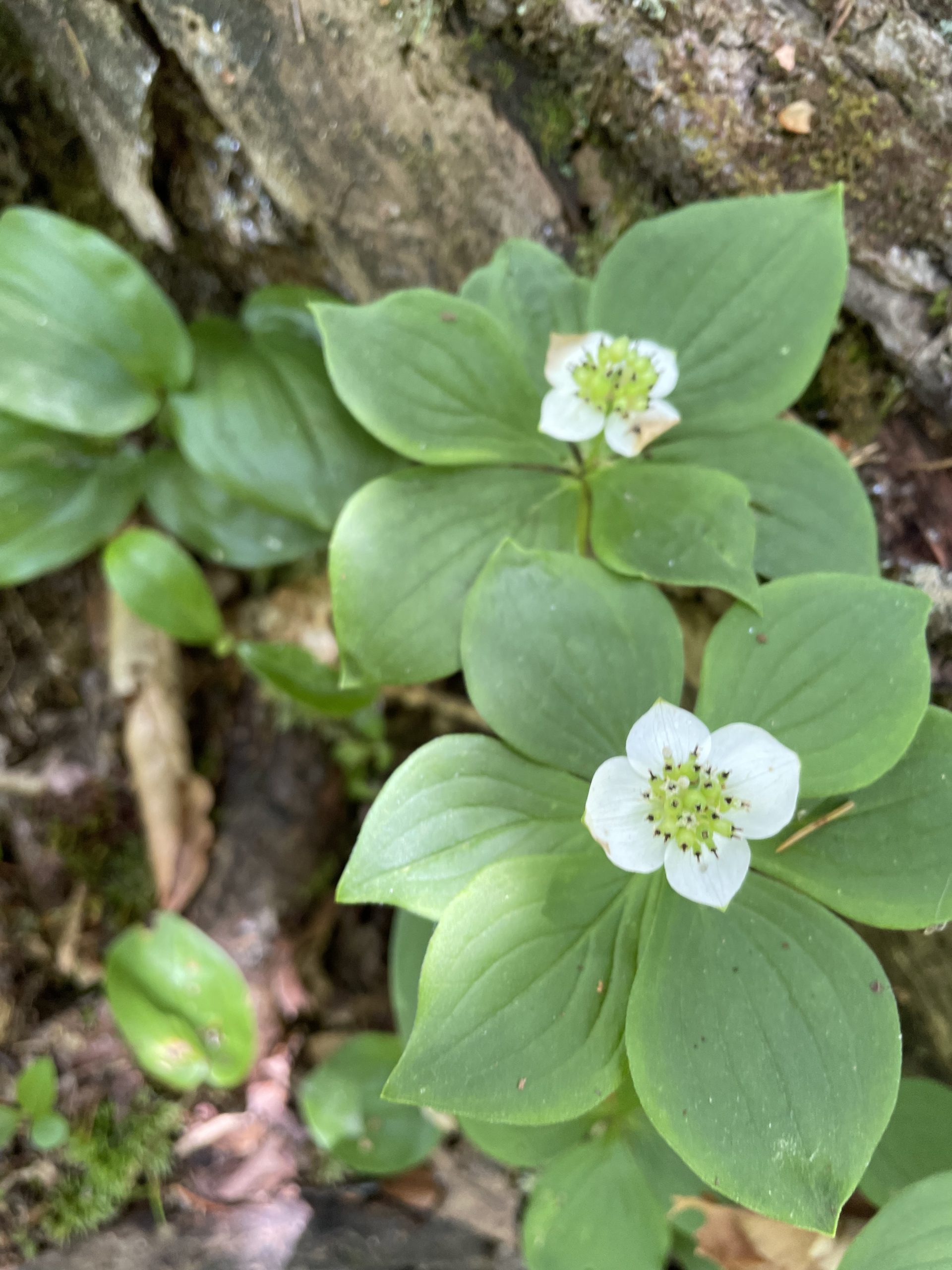 The plateau rolled away to the north for miles, and I followed it for miles along the trail. There were some gentle climbs to wooded peaks, and countless bogs opening out to sunny ponds. As Tuesday came to a close, I walked around a pristine mountain lake to the Upper Goose Pond Cabin.

This cabin, and the area around it, were purchased by the park service from a private club many years ago. It’s an unusual spot that’s owned by the Appalachian Trail directly, instead of by a local club or park. The cabin has a caretaker and is set up as a kind of fancy shelter, with a kitchen, canoes, and a dock. I stumbled into it not knowing it was here, and was pleasantly surprised when I was asked if I’d like pancakes for breakfast. 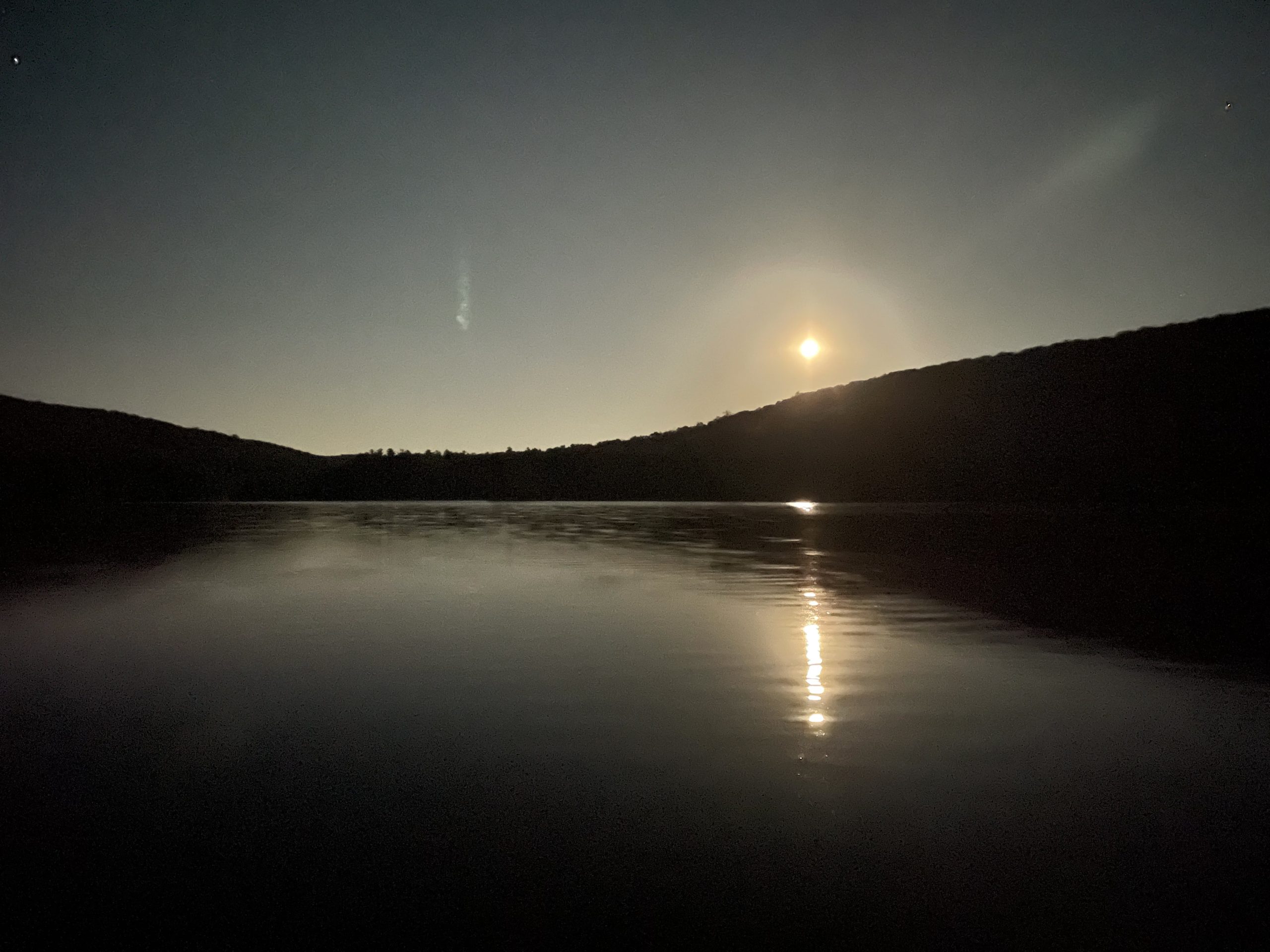 That night was the full moon, and with my tent set up by the water I had a perfect view of the moonrise over the lake. The ripples had a silvery glow, and though the air was too cold to swim I dipped my feet in the water at the end of the dock. Somewhere down below the fish I had seen earlier were guarding their nests, and I could hear frogs calling across the lake.

The next day, after the pancakes, I kept on walking through the bogs. Ten miles in there was a road crossing, and a sign directing me to the ‘Cookie Lady’. They led me to a farmhouse off the trail, where the family had set up a rest station for hikers and served up lemonade. And yes, there was a box of homemade cookies! 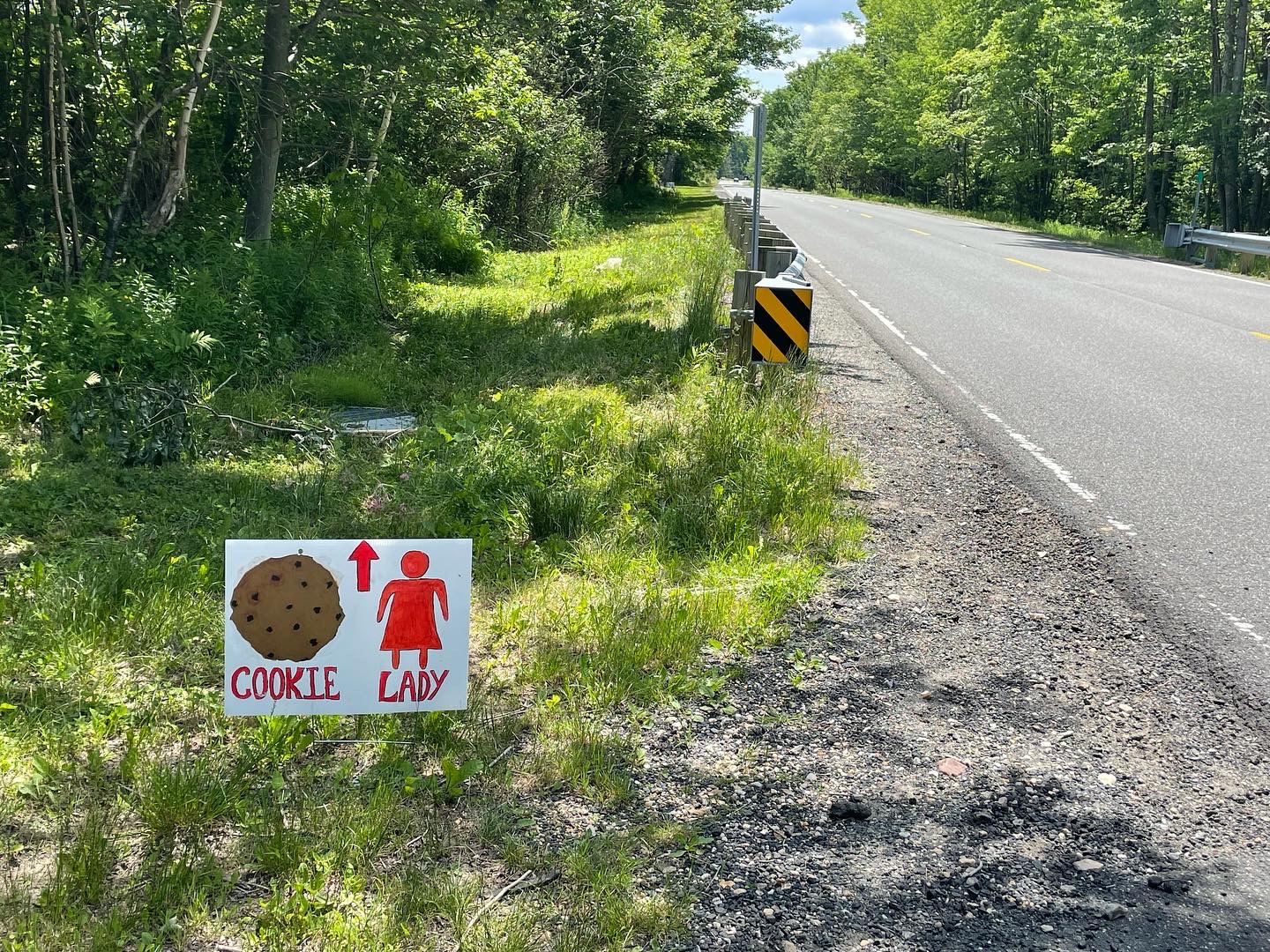 After ten more miles of hiking, skirting beaver ponds and swatting off deer flies, I plunged downhill and entered the town of Dalton. Dalton’s a bigger town than most along the trail, and unlike most, it feels completely normal. It’s not an upscale tourist town, or a mountain outpost that once saw better days. It’s just an average American town where lots of people live. I passed a ballfield where parents were gathered to see their kids play, while teenagers rode around on skateboards past the postage-stamp lawns. As a dirty hiker powering down the sidewalk with my trekking poles, I felt pretty out of place.

I stopped by a trail angel’s house where many hikers were camped, and reconnected with Renaissance, one of the ‘Amoeba’ trail family who’s gone ahead. I’ve seen him, and PT Cruiser from back in Virginia, almost every day since then. They may finally have got ahead thanks to my rest day here in Manchester, but it’s been nice to have some company for a few days!

I had some dinner in Dalton at a burrito place, and then set back out uphill into the forest. I’d expected more blocks of granite holding up the hills, but this mountain was different. It seemed like most of it was made of marble. Smooth round boulders of whitish rock with an almost translucent texture lined the trail. I camped on top that night and in the morning stopped at an overlook, where a marble cliff jutted out towards the town of Cheshire. There was something so striking and unusual about this hill that it’s stuck with me as I’ve continued north. I suppose this is why it’s called ‘Crystal Mountain’. 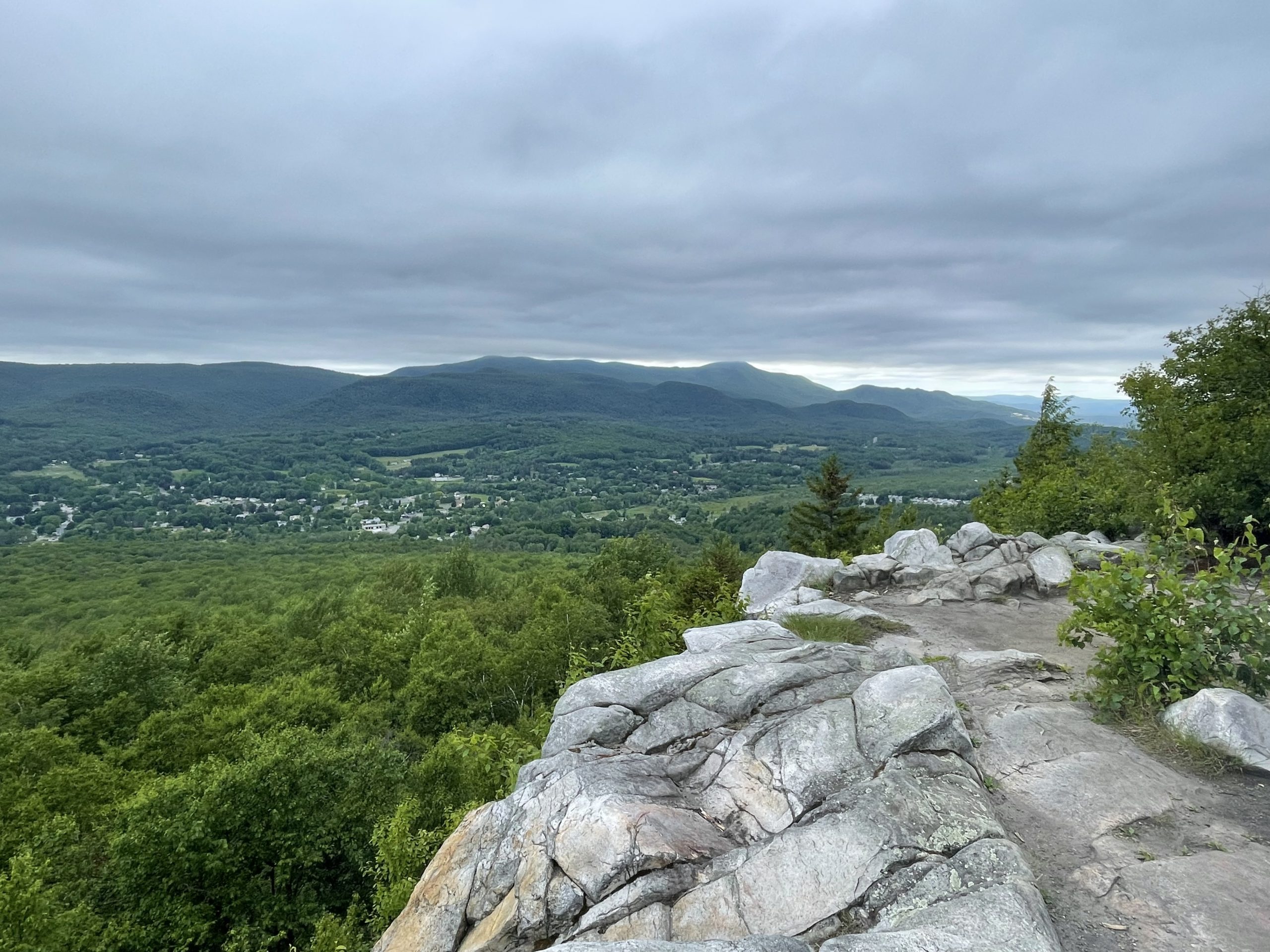 Looking at Greylock from the “Cheshire Cobble”.

Cheshire was a smaller place than Dalton, and the most noteworthy thing about it was the memorial to the ’mammoth cheese’ the town had once presented to Thomas Jefferson. I stopped at the gas station for some coffee, and arranged for a nearby outfitter to bring me some repair glue and a fuel can before I headed out. My air mat had sprung a pinhole leak, and I’d been having to reinflate it in the middle of the night.

Then I tightened my belt and started the climb up Greylock.

At 3489 feet, Mount Greylock is the tallest peak in Massachusetts and one of the highest in the Taconics. The trail traverses its ridge from south to north over a steep twelve-mile section. I was hoping for a view at the top, but had seen the peak lost in a cloud down in Cheshire, and knew I could only expect so much.

The Taconics are made out of a hard, warped rock that was baked out of deep-sea mud when two continents crashed together. I ascended across rippled blocks of this shiny blue stone until I reached the summit. As I climbed, the birch was replaced by fir and spruce, and the cloud thickened around me. 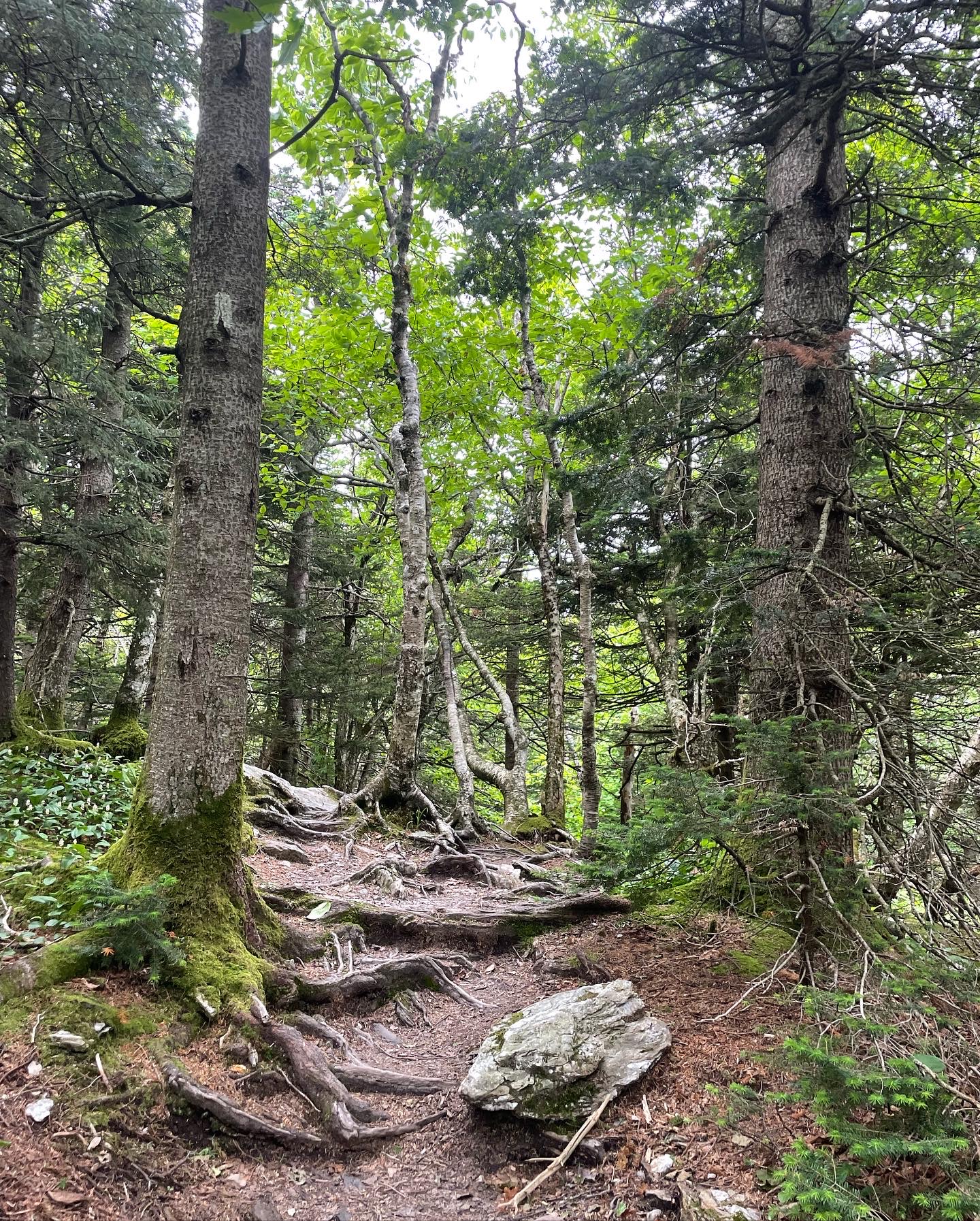 On the way up Greylock.

The huge monument at the summit was barely visible through the mist, and when I climbed its tower there was, of course, no view. I spent some time in the Bascom Lodge before moving on, down across that marble valley of the Hoosic to the town of North Adams and the climb towards the Vermont border. I stopped for the night by a rushing stream that cascaded noisily over pale white boulders.

There’d been plenty of birches before Vermont, but it was only once I crossed the border and joined the Long Trail that paper birch seemed to come into their own. Their bright white bark peels into intricate curls, sharing the forest with the smooth gray trunks of beech and the glistening bronze of yellow birch. When the wind blows up here, the leaves quake and shimmer in the sun, from the tallest maples down to the hobblebush down on the forest floor. You can lose yourself in the woods. 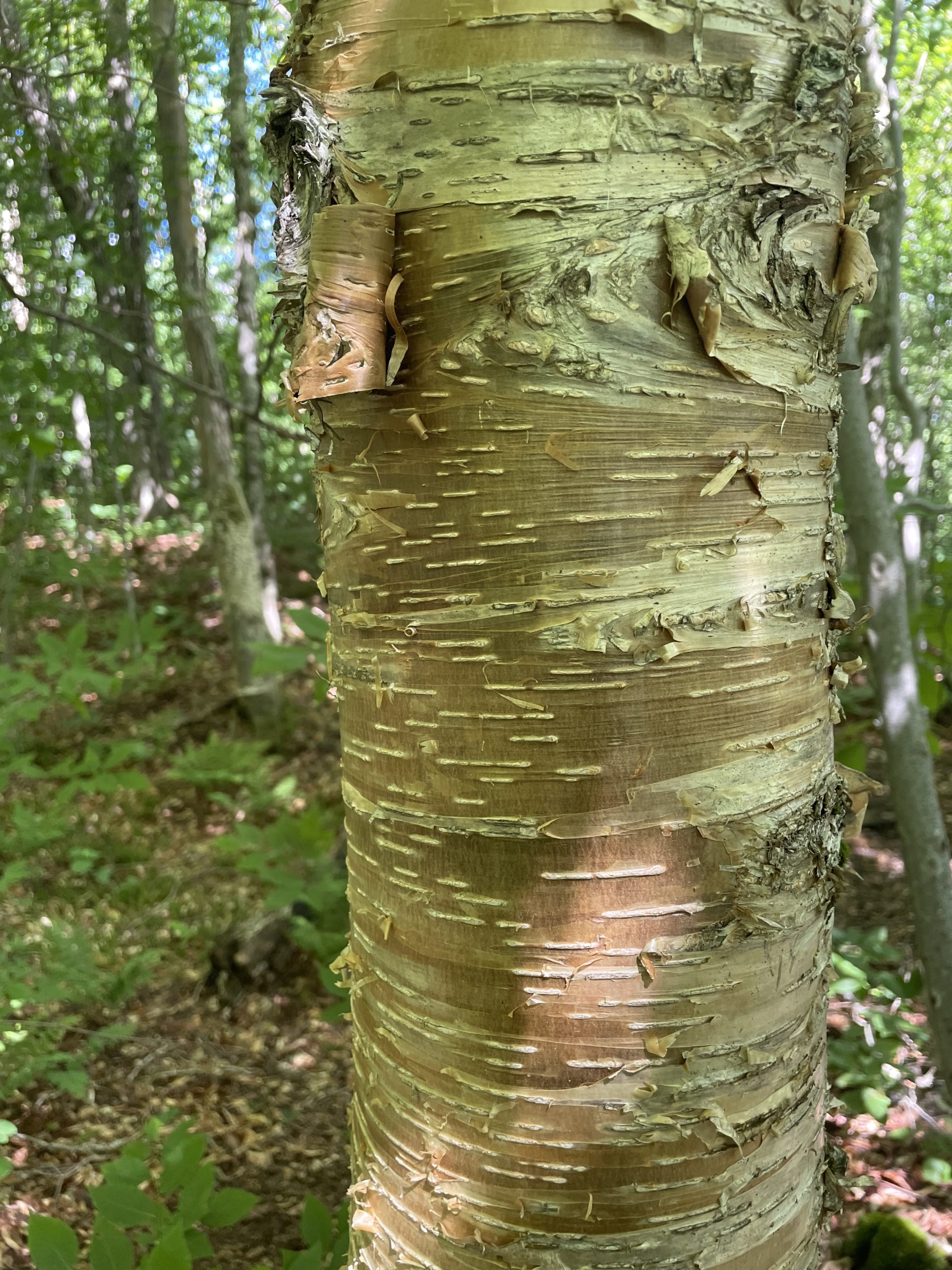 A yellow birch in the Vermont woods.

The Green Mountains continue the Berkshires north, sweeping up in a rounded plateau of granite. On that first day of warm and sunny weather, the bogs brought out mosquitoes and deer flies that I was constantly swatting away. But the forest was beautiful, and the view of an open clearing ringed with tall spruce was more than enough to make up for the biting bugs. Once a huge snapping turtle was lying in the trail, its giant crocodilian tail sticking out from its shell. And as I packed up my camp a hummingbird flew right in front of me, hovering so close I could see the red feathers on its neck. 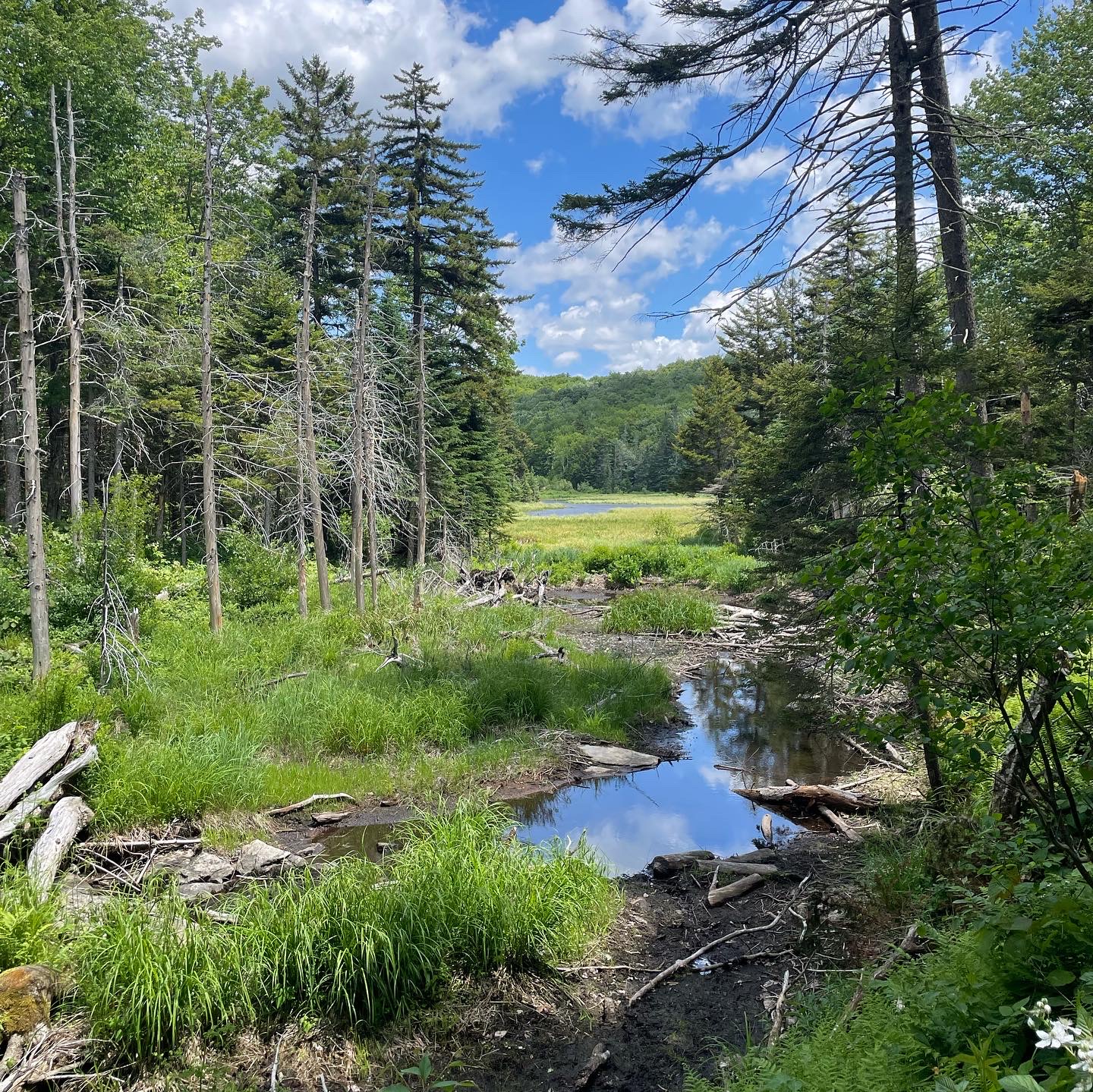 A Vermont bog (as opposed to a Massachusetts bog).

Then the cold and wet came. For twenty-four hours, it was 40 degrees and windy, spattering rain like early spring was back. It was strange weather for mid-June and I was taken by surprise, though I was glad for the respite from the bugs. I climbed two high peaks, Glastenbury and Stratton, without a single view. Mist covered the mountain and a howling wind shook the firs. I felt a little jealous of the bubble down in Virginia. 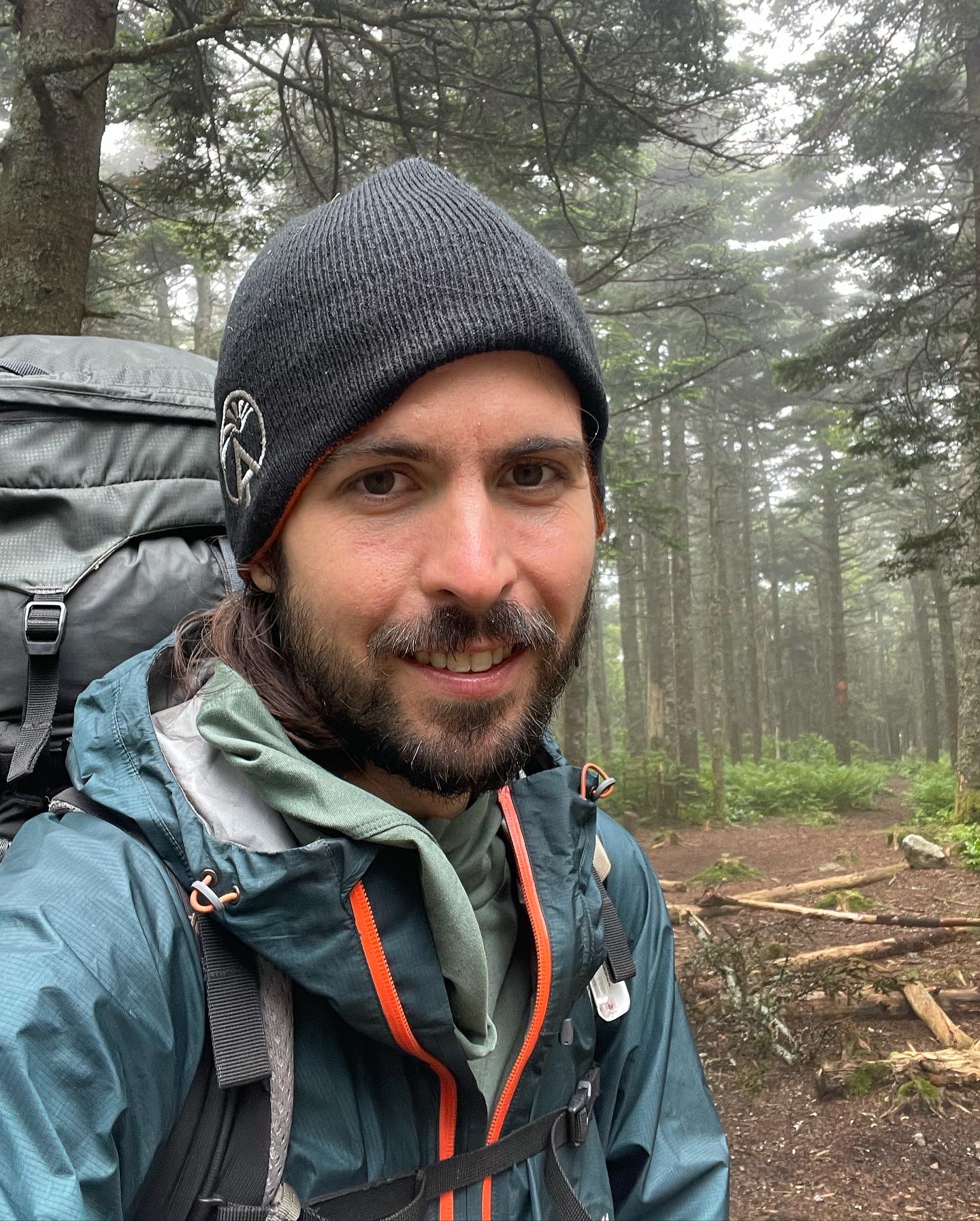 The weather finally relented and cleared up. I had a lovely view by Stratton Pond, and a mile later I reached the three-quarter point of the trail. I’ve come a very long way since the one-quarter point in southern Virginia!

After that, PT caught up with me, and I kept pace with him until I saw Andrea ahead of me walking the Long Trail. We’d planned to meet up and spend the next day in town, and the timing worked out perfectly. Manchester’s far from the trail and you need a ride, but there’s a great hostel and a well-stocked, if fancy, town center. It’s certainly more a place people go to than a place they’re from — the opposite of Dalton. But it’s a great place for a break and a reunion before the last few days of the Greens, and the great eastward turn towards the Whites.