I slept in a little bit since the shuttle to town didn’t leave till 9 am.  I was wearing my town dress today and was going to bring my whole pack to town.  I saw Hopper again who had just arrived at the shelter.  We all caught the town bus for 50 cents and took it to the grocery store and dollar general.  Between the two stores I was able to get cheap food and they had a good deal on cliff bars!  From there I walked down to the laundry mat and washed all my hiking cloths.   When I was done I saw there was a Japanese restaurant called yummy yummy and headed there.  I ordered some rolls and teriyaki.  Papa bear and easy tiger had finished shopping and came to sit with me and we all enjoyed a pretty good lunch.  We called for the 2 ok shuttle and rode back to Partnership shelter.  There was no water for 7 miles north so I headed out shortly to work on it.  It was rocky and hot but I kept a good pace.  I got to the shelter a little late but there was still room.  I had a few unlucky things happen that night. I fell trying to hang my bear bag and in while crossing the stream.  I ended up needing help for my bear bag because I was just too tired.  Then while I was cooking dinner, my headlamp died so I’ve been using my Luci light ever since.  Other than those small things it was a pretty solid day and it was nice to be protected from the rain that night. 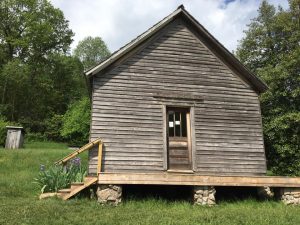 Mexican Lunch
I planned to stop in Atkins for lunch the next day since there were two restaurants on an exit off interstate 81 that were right on the trail.  It was raining when we woke up and so I fell back asleep until it stopped.  About two miles into the hike there was an old school house museum that had trail magic inside.  It was cool to check out and I enjoyed a soda on the porch.  I got to Atkins and followed a couple of backpackers into the Mexican restaurant connected to the gas station.  I got a burrito and enchilada and was pretty pleased until I had to visit the facilities a few times (spicy foods while backpacking effect you totally different). Then we hiked on till we got to a really pretty campsite next to a stream.  It was quite a nice day out and a lovely walk for the most part.
1/4 way
The next day it was beautiful outside.  The rain predicted for the last few days has only occurred when I’ve been in my sleeping bag for the most part. I was feeling a little sluggish as I headed up the first hill.  Near the top there was 1/4 of the way sign!  It’s a pretty big milestone but it has occurred to me that at this rate it might take me 8 months to finish but I’ve been slowly putting in more miles and there’s many others in the same boat.  I started hiking downhill and feeling the heat and the humidity.  I know it’s summer but it still made me feel super sluggish. There were a lot of fence stiles to climb over that day which is pretty difficult with a pack.  I also encountered some cows on the trail who were mooing a lot more than usual and seemed crazed.  I got to the shelter and even though it was a short day I knew there weren’t many options ahead.  It was only three of us there that night (Bearclaw and two Sips).  I’m glad we stayed because around 7 it started to downpour which lasted the entire night.  We cooked and chilled in the shelter with my Luci light lighting the shelter. 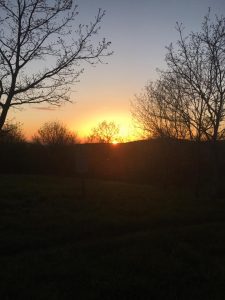 Chestnut Knob Shelter
I cooked in my sleeping bag the next morning because it was chilly.  It was overcast so I headed out and walked fast (cold weather is fantastic for hiking).  I started getting warm around lunch and I took a break before the 2000 foot climb up to Chestnut Knob Shelter (the others from the night before joined me).  It was a tough climb up and around half way you have to get water since there’s no source up there.  But the last two miles are through open pasture mostly so it’s pretty enough to distract you from the uphill your hiking.  I had been to the shelter years before but I was glad to stay again because it’s easily the second most awesome shelter on the trail.  It’s a fully enclosed with a door shelter.  There are Windows in there so it’s not dark and dreary.  It also had bunks inside instead of the usual platform.  Outside there is a view overlooking burkes garden and we got to see an amazing sunset that night. 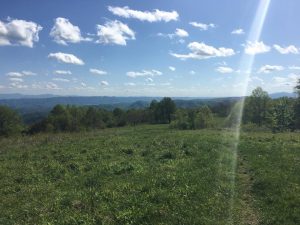 Trail Days
I woke up to a lot of shuffling and went out to look at the sunrise.  I was off by 730 in order to meet my dad at route 623 by 11.  It was rocky terrain and although it looked flat on the map it never is.  He met me just 10 minutes short of the road and offered a ride to One Step who’d been at the shelter the night before.  We headed off to Damascus to check out Trail days.  I think I’ll have to go back to get the full experience because we didn’t go to the scheduled events because we had no idea what times everything was happening but it was fun wandering through the crowds of people and spotting familiar faces from people on the trail.  I got to see Footlong and Tumbleweed!  We walked through the venders selling backpacking gear and colorful tie dye and other types of stuff you’d see at floyd fest or a festival.  We headed towards tent city where all the gear fixers were staged and I got new loops for my polls for free.  Then I headed back to Mount Rodgers outfitters where I got new socks which will hopefully work, and since they couldn’t fix my light I got a new one for free too!  Then we headed to the brewery and since we were pretty exhausted we left the festivities and microwaved some homemade lasagna at the hotel in Glade Spring.  We did some resupply, ate some ice cream, and the exhausted from everything we fell asleep
< Previous Post
Next Post >