Our group spent the morning in Harpers Ferry. Cricket, Come Along, and I got resupply boxes at the post office. My new excitement is seeing what treats my parents snuck into the box. This time I scored a York peppermint pattie in addition to peanut M&Ms! Hobble-It’s box got returned so Cricket and I gave her some food. Oh, and I sent myself a new pair of Salomon shoes. My old pair gracefully retired at ~1,075 trail miles. 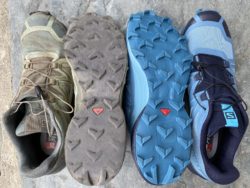 Directly out of town, the trail crossed a metal bridge over the Potomac and entered Maryland. My first time in the state! Then it followed a bike path between the Potomac river and a green coated canal. Many snapping turtles hung out on logs floating in the canal. I saw a large lizard that looked like a miniature crocodile. 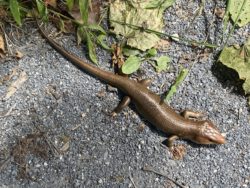 My new shoes felt great. Recently I felt rocks through my shoes and wondered if my feet were tired of hiking or if my shoe soles were too thin. Luckily the shoes were the culprit.

I rendezvoused with Cricket, Come Along, and Hobble-It at a camp-site near Crampton Gap shelter. We ate dinner together. My savory dinner hit the spot after too many sweet snacks.

After an early start, I made a couple stops for water at frost-free faucets then checked out the first monument to George Washington. It looked like a giant milk jug and from the top I saw a couple soaring raptors. There was a tree nearby with ripe mulberries. I pulled down a branch so Hobble-It and I could graze. 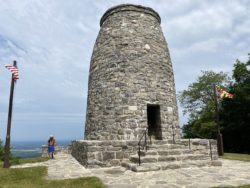 We reached our lunch shelter quicker than expected due to the easy terrain. Not long after, Hobble-It and I ran into Steve (he ate lunch with us in Harpers Ferry). He hiked with us to the next viewpoint, Annapolis Rock, but first an ATC Ridgerunner came by and asked if I was Strider. She had a bag with three small Copperheads and we watched her release them into the wild. Yay, I really wanted to see one and instead saw three! The Ridgerunner relocated the snakes from a rocky viewpoint to protect visitors, but didn’t take them too far, otherwise they could lose track of their den and die. 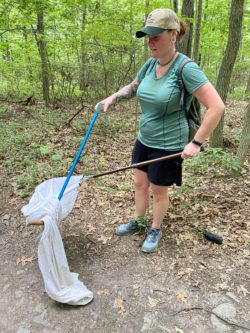 Hobble-It and I stopped at the Black Rock Cliffs viewpoint and felt rain drops. The rain was refreshing after the muggy morning and it drove away the bugs that had been buzzing my ears. The trail became a stream and I splashed through puddles in my new shoes. I saw at least four frogs and a turtle with a yellow accented shell.

By 5 pm we had done 21 miles and reached our destination shelter. Cricket claimed the last shelter spot; the rest of us set up our personal shelters. I was happy I didn’t have to do it in the rain. Bumblebee was already there in a tent, he hiked 31 miles straight through to sunrise then rested all day. Come Along, Hobble-It, and I ate dinner outside then retreated as it began to rain.

I woke to a light rain, had hot tea and cold-soaked oats, and hit the trail. It’s funny how damp clothes and wet gear don’t bother me like they used to. In the forest windblown droplets fell from the leaves while in the fields a wet mist hung in the air.

We ate lunch in a park under a large pavilion. I hung my wet tent and air mattress on railings and was surprised when they mostly dried out. It was overcast, but a light breeze stirred the fabric. The park had a full service bathroom and drinkable water. I never dug a single cat-hole in Maryland, there are bathrooms everywhere!

After lunch we crossed the Mason Dixon line and entered Pennsylvania. Another state that is new to me! Come Along, Hobble-It, and Bumblebee hitched into town for resupply food while Cricket and I kept hiking. I felt mentally tired and my pack felt heavy, but I made it to Tumbling Run shelters in the late afternoon.

It was a great spot with twin shelters, two clotheslines, picnic tables, a clean privy with hand sanitizer, and flat, gravel campsites. I aired my feet, elevated my legs, and joined Cricket at a picnic table. Eventually the others arrived after a successful trip to town. We squeezed four tents and one hammock into a single site. It’s more fun to be together! We hung out on logs as we snacked and chatted. 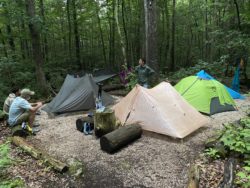 Started out as our typical day, go 20 miles and meet at least halfway for lunch. (Love that 20 miles is now our usual.) Come Along and I stayed together most of the morning, hiking and chatting with a section hiker named Charlie. We met up with Hobble-It at Caledonia State Park, spreading out clothes to dry while we ate lunch.

Cricket had an infected toenail and wanted to pick up antibiotics at a Rite Aid in Fayetteville. She didn’t want to hitch alone, which I entirely understood. I told her to come to the park and I’d go with her after eating. We walked the short distance back to PA 30 (with lightened packs and our poles to look legit) and within five minutes a nice lady gave us a ride the four miles up the road. She was even willing to wait and take us back, but Cricket’s prescription wasn’t ready.

What to do while waiting? We split a pint of Ben & Jerry’s Phish Food and ate other snacks. Heading back I suggested we try for a ride at a nearby gas station. We were there a couple minutes before two other thru hikers and their friend gave us a ride to the park. Hobble-It and Come Along waited for us the entire time. Families stick together! Unfortunately Hobble-It was charging a battery bank and headphones in the bathroom and someone stole them along with the wall plug and charging cable.

It was 10 miles to Birch shelter which had lots of great camp spots alongside a gurgling stream. So far Pennsylvania camping has been awesome, not sure why hikers dislike the state.