Today was our big day.  We’d been putting it off for months, focusing on getting in better condition before carrying any serious weight on our weekend hikes.  But with only six months left before our thru-hike, and the temperature finally dropping, we decided it was time to take the plunge.

So this morning I swapped out my little Osprey daypack for the ULA Circuit I’ll be wearing on the hike.  Since I don’t have all my equipment yet, I put in a five pound dumbbell, various bottles of water, and some throw pillows to cushion the load.  I calculated that — including the pack — I was carrying around fourteen pounds.  It was heavy, surprisingly so, but far lighter than the 25+ lbs. I’ll eventually have to haul.  My husband loaded up his pack with close to thirty pounds. 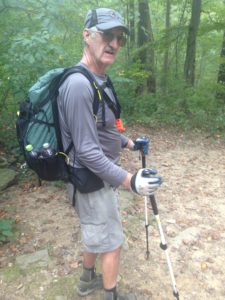 We set off shortly after dawn on the easiest section of trail we could find.  I could immediately feel the difference.  The added weight pulled on my shoulders.  Going uphill was harder, even on a gentle slope.  I experimented with the straps of my backpack, shifting the weight to various positions, a process I assume I’ll eventually work out.  But fourteen pounds was a lot heavier than I’d expected, causing more stress on my knees and feet – still manageable, but enough to fill me with doubts.  How could I possibly double this load?

I couldn’t, I decided.  Clearly I’d have to get the pack weight down before our hike.  But what could I cut out?  I obviously can’t survive without food and water.  Ditto a sleeping system (hammock, sleeping bag, under-quilt, and tarp). My fleece hoodie?  At 14.5 oz. it’s one of my heaviest items, but it’s incredibly cozy and soft.  Surely I deserve to bring ONE luxury item along as a reward for climbing over those mountains, right?

I kept reviewing my list as we hiked, mentally adding and re-adding the numbers, trying to figure out what to cull.  My pack weighs about two pounds.  The clothes I’ll take are another five.  My sleeping system is also about five pounds – a little heavy, but I need to be warm at night.  Add in toiletries and cellphone, several miscellaneous items, and it added up to the weight I was currently carrying — but still without water and food.  Growing increasingly more discouraged, I went through the list again.

We only went eight miles – half the distance we did yesterday without our packs.  Then we drove home, both of us sobered by the realization that we have a LOT more conditioning to do before the hike.  When we got home we weighed our packs – properly this time, on the bathroom scale.  As we expected, my husband was carrying just over thirty pounds.  The good news for him is that he is already at his maximum weight.  He has six months to get used to it, and he’s good to go.

I stepped on the scale next  — then stared at it in disbelief.  My pack didn’t weigh fourteen pounds.  It weighed twenty!  I got off and on the scale several times to be sure, both with and without the pack, but there wasn’t any doubt.  Thanks to my poor math skills, I’d miscalculated the weight.

I was thrilled.  The hike this morning wasn’t easy.  I definitely have a lot of conditioning to do, and I still have to increase the weight.  But suddenly, our thru-hike seems far more doable, our chances of success greater than they did before we set out.   Hurrah!  Now I just have to improve my math! 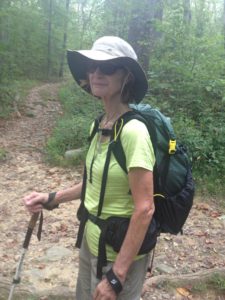