Max Patch and Chillin with the Mayor

Clear and blustery Day 25 ended on top of Max Patch, a sprawling grassy bald overlooking miles of hills and mountains. As golden hour fell it became photo-op heaven. A Hallmark family of picnickers frolicked with their dog and Kyle stalked them with his camera. It was so nice that Team Mudslide decided it deserved some pizza and beer, if only we could acquire such civilized niceties. We tried six cell phones before we got a signal on Rozencrantz’s phone, hoping to get some delivery up the little dirt road nearby. Turbo called through a list of pizza places we got from Information. Meanwhile, PeaceDawg befriended a guy flying a kite with his daughter. The charmer that he his, we watched him work his magic across the bald for over twenty minutes until he came back with the prize: the guy would drive him into town to buy the goods and drive him all the way back. How PeaceDawg managed this I still don’t quite know. But sure enough two hours later we had pizza and beer while the sun set. We felt spectacular. 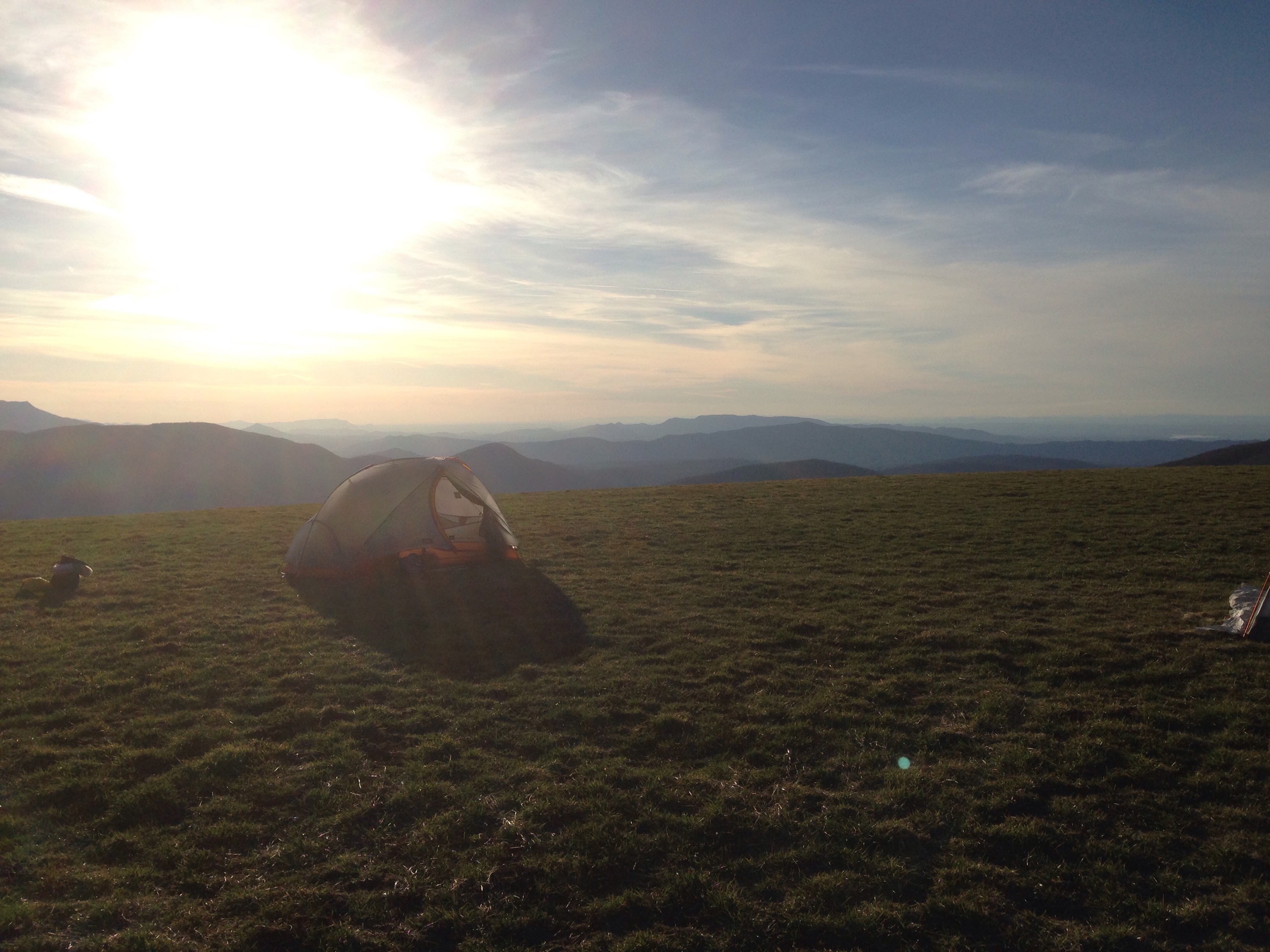 The next day we pushed big miles into Hot Springs, NC. The whole way there I listened endlessly to Kyle (trail name now “Snap” for his big fancy camera) and PeaceDawg banter about all the gear changes they planned. Both wanted to buy larger trail guitars and new packs. Personally, I am not a gear person, and the kind of shop talk that hikers get into gets a bit exhausting. Ah well. I was also maxed out on my social-time by then. Amazing how little time alone I actually get on the trail. I needed to recoup, so while Team Mudslide went into town that night I tented alone on a ridge. It felt good.

Day 27 I nearoed into Hot Springs and ate a massive breakfast at the diner. Syrup in the coffee for bonus calories? Yes. And jam and butter packets with every bite. The town was charming, the AT running right down the sidewalk; it smelled of bacon and cut grass.

Reuniting with team mudslide we split a motel room at the Alpine Court Motel, thanks to more of PeaceDawg’s magic. Apparently all of the hostels were super overpriced last night until PeaceDawg approached the owner of the Alpine Court: the mayor of Hot Springs. Not only did the mayor give us an awesome deal, he offered to buy us whiskey and hang out that night.

Well, that night it happened. We sat around drinking with Mayor Bryan and a hiker couple who got sucked into the town. We heard all kinds of stories about odd little Hot Springs (formerly known as Warm Springs) with its population of 600 and all kinds of odd individuals passing through. Apparently the previous police chief got his job after robbing the town bank. We also learned that Mayor Bryan is a devoted fan of Jaegermeister and Redbull.

Unfortunately this meant we were a bit hung over when our parents met us the next morning (sorry!) but the story with the mayor was too good to pass up. Mom and Dad drove us to Asheville where Kyle bought a new Taylor guitar, a new pack, and new shoes. It was great to see them and made me reflect on how long we’ve been out here already. Thank you!

The next day I surmounted this grilled-cheese-burger back out of town: 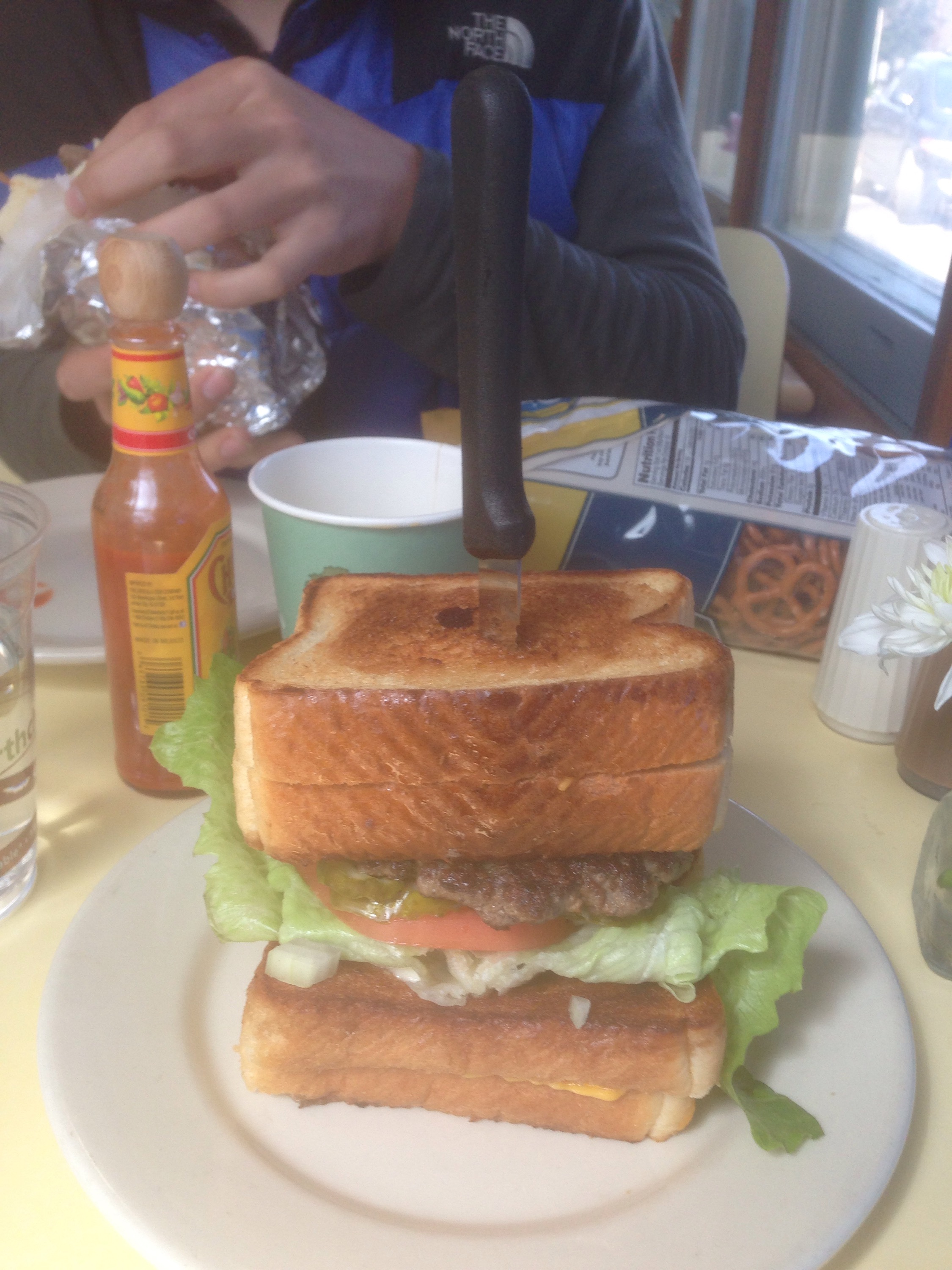