Hats Off to Boots Off: A Hostel is Born

Hostel owners are a special kind of trail angel and I think it’s time for their story to be told.

Last year, my friend and fellow trail angel, Crazy Larry of Damascus, posted a short video on Facebook of a new hostel, Boots Off. Once I saw that, I just HAD to drive up there and see it for myself. So, I took a couple bottles of wine as a housewarming gift and headed up there. 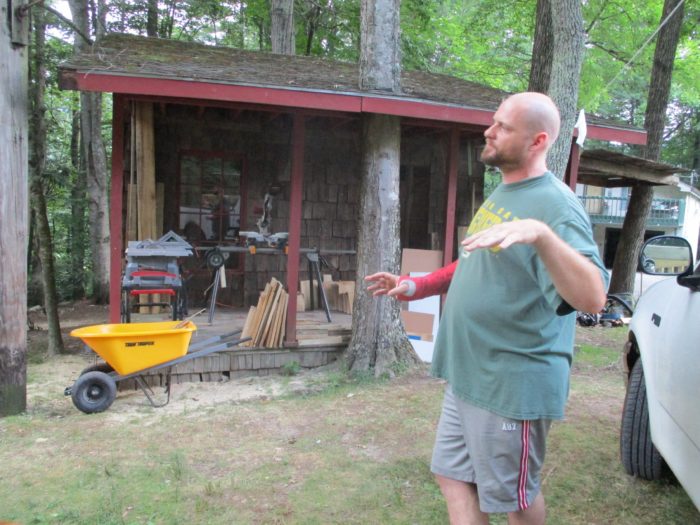 Jim Gregory, standing in front of his newly renovated custom bunkhouse. Very few trees were hurt in the making of this hostel!

From the moment I drove up to this fledgling hostel that hot summer day, I knew it was something special. Only open since May, 2016, Boots Off is situated on about 2 acres of forest, at the base of Pond Mountain Wilderness, and is less than a half mile from the picturesque Watauga Lake.

The owner/operator, Jim Gregory, a robust, burly man, was wearing a bright red cast on his right arm as he walked up to greet me. He wasted no time telling me of all of the wonderful things they are doing at his new hostel. He showed me the two story chalet (with basement) that he lives in, which is central to his heavily wooded property. Radiating out from that were several out buildings and a few garages. 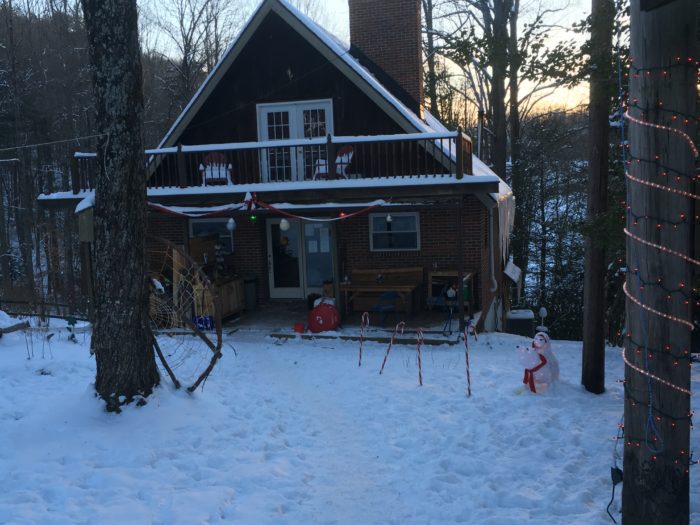 Jim’s cozy Chalet, where hikers come in to eat their meals (taken during the first week of January, 2017)

His newly renovated bunkhouse was the  handiwork of a work-for-stay hiker from Great Britain, Neil Clements. It features 8 cozy bunks, fully enclosed, with colorful curtains in their openings and a light and receptacle inside each berth. Neil also built a custom, one-of-a kind his and her outhouse, complete with stylish lighting inside and out. Almost all of the materials repurposed, or were sourced from a local sawmill, for the rough-cut rustic look. 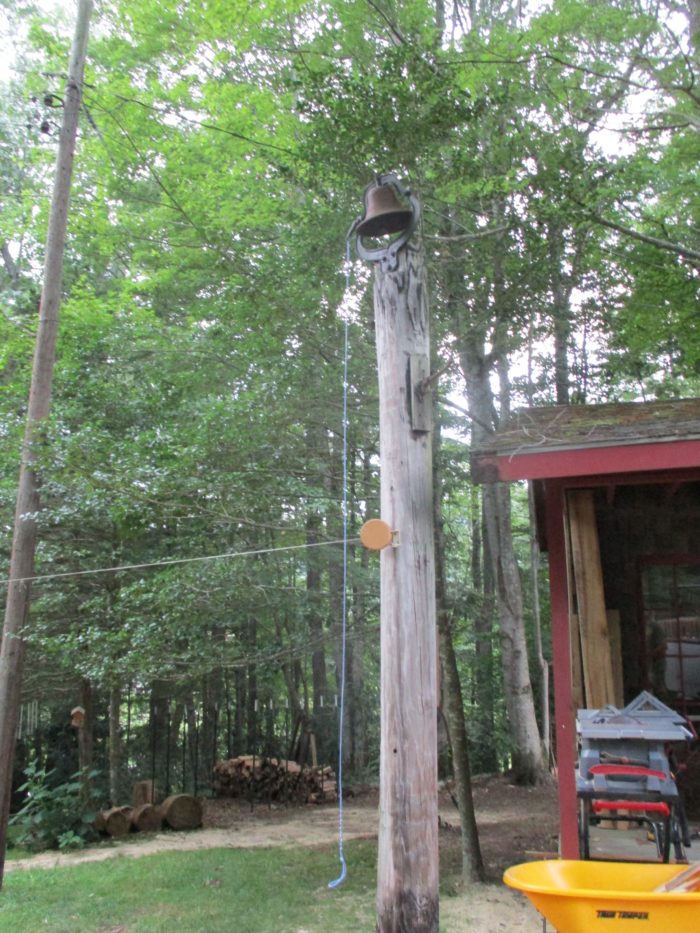 This Bell was rung quite a bit during 2016

Beside the bunkhouse stood a tall wooden post, with a large cast iron bell atop it. Jim proudly explained the bell: ” The bell is rung by hikers as they are departing Boots Off for a sign that they had a good stay, and for safe travels on the rest of their journey”

As we walked, Jim told me how he had a good career in the business world but that he yearned to do something different. So, in early 2016, Jim did a section hike of the A.T. to, “Clear my mind and to find out what path I needed to take”. It was then that he decided to look for some property along the trail from which to start a hostel/recreational retreat.

Why the Name, Boots Off?

Jim said that, early on, he was struggling for a name for his hostel. His mom, who lives in the apartment above the two car garage, asked him, “What is the first thing that hikers do when they walk up”? He told her, “After they set their pack down, they usually take their boots off“. “Well then, that’s your name” she said. Thank God for mama’s!

He Risked his Life for his Hostel

As I toured his spacious property, it was apparent that, though they had many things done, there were many more things left to do. Being situated on the side of a mountain, there was very little flat ground for tents. To remedy this, some of his work-for-stay hikers had been busy on his wooded hillside, clearing brush and digging flat terraces for tent sites.

On a recent work day, Jim and his crew were attempting to cut out a few trees, when one of them leaned dangerously against another. Jim made them back off, while he struggled to free the tree. That’s when a large dead branch came crashing down toward his head. His quick thinking, which led him to raise his arm to protect his head, probably saved his life. However, it broke his arm in the process.

Where Love Flourishes, So Does Art 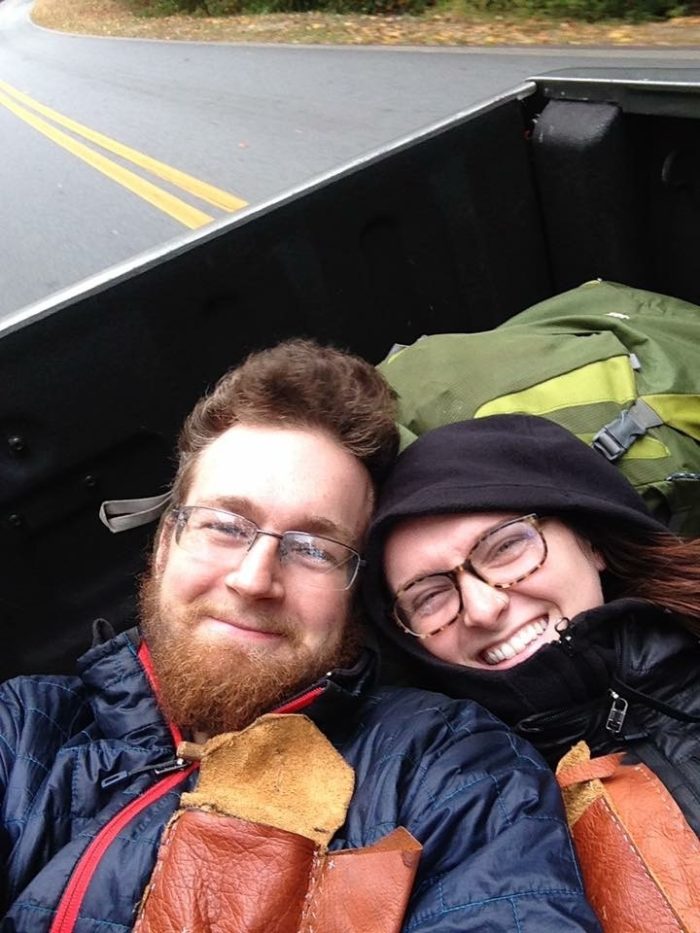 Constable and ABEC, two strangers who fell in love at Boots Off, riding in the back of a pickup truck headed to Atlanta, and an exciting new life together

During the late summer, the forces of nature and the universe conspired to bring together two special people at Boots Off: ABEC and Constable. ABEC (Anything But Eye Candy) told me the story of how she came to meet her future husband at Boots Off.

ABEC, a petite young woman in her early 20’s, said that, after graduating college, she worked as a pre-school teacher for a year in Portland. She told of how she first became intrigued with the trail. It was when she was 18 and up in Vermont when she met a 65 year old hiker who regaled her with marvelous tales of his through hike on the A.T.. After that time, she told me, “I felt called to the trail and felt that I only had a brief window of opportunity”. Though she didn’t have enough time to hike the entire trail, she said, “I was going to hike till I felt good. That ended up being around 500 miles.

She said that, unbeknownst to her, Constable was living in Portland at the same time, building micro houses. She told me that later she discovered, “We actually shopped at the same grocery store”! but never met.

Well, during August, she began her southbound hike, starting from Daleville, VA, while Constable started northbound from Springer. The day that they converged, she said that the weather was horrible and that she’d been hiking so fast through rain and thunderstorms that she didn’t take time to get water, choosing instead to press on to the Watauga Lake shelter. Bedraggled and thirsty from hiking 26 miles, she got to Watauga Lake shelter to find it closed due to bear activity.

At the end of her rope, she hiked on. When she got to the public swimming beach she was met by this lady who told her that a young man came down earlier that day and told her, “I own a hostel and if you see any hikers, send them my way”. ABEC didn’t even know there was a hostel there. Boots Off was truly a godsend.

The same day, in the same storms, Constable was making his way up the trail, also thirsty from not drinking much that day. He later told ABEC he’d been hiking for 27 miles.

When they met at Boots Off, they immediately hit it off. Constable, like ABEC, was yearning for ‘something more’ in life. Soon they began to discover how much they had in common, from living in Portland together, to their love for the A.T.

Since they both were artists, Jim had them doing art projects; ABEC doing a colorful mural on a drab garage, and Constable building a creative, one-of-a-kind, outdoor shower. It wasn’t long before they fell in love. Currently they are living out in Washington state and are engaged to be married.

A Hostel Is More Than a Collection Of Buildings, Run By An Anonymous Staff

Boots Off is a unique hiker’s haven and is a beautiful reflection of the artistic talents of the many hikers who’ve walked up its driveway. Hopefully it is here to stay…. 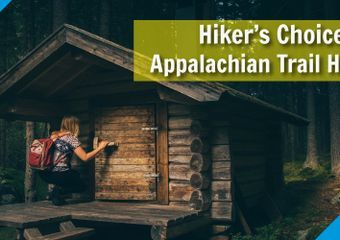 Hiker's Choice: 2016 Best Appalachian Trail HostelsThe Appalachian Trail has a lot of defining characteristics, perhaps none as welcome to a weary hiker as the incredible hostel community running the length of the trail. You really can begin and end your hike at hostels, as well…Read More