Most folks do not live near wilderness areas. The economic dynamism of metropolitan cities and the logistics of millions upon millions and millions of people make wild areas the perfect destination for escape from the urban hive, but they are not necessarily good places to make a living for most people. For the many of us who live in metropolitan cities, finding outdoor adventure in nature, locally, can be a challenge. For the urban dweller who is trying to get or stay in hiking shape, the availability of (or potentiality for) urban green space acquires vital importance.

I was born and spent the first sixteen years of my life on Staten Island, perhaps New York City’s most provincial borough. Staten Island’s west shore was the site of Fresh Kills, at one time the largest urban landfill on planet earth. (A “kill” is a Dutch word, referring to a salt water creek. That the English in the word “fresh” was used to modify the Dutch word “kills,” and that the old time gangsters would dump bodies along the expressway by the landfill, is an unfortunate coincidence of criminology and linguistics.) Environmentalists in the 1970s and 80s successfully fought further construction of high speed roadways, and helped create Staten Island’s “Green Belt,” the largest green space within the boundaries of New York City. After Fresh Kills dump was closed in 2001, the land was transferred to the Parks Department and is being integrated into the Green Belt. However, almost no one I knew growing up in the 1980s used the Green Belt.

I moved back to New York City in 2003, to write and teach. I had lived for many years in Kentucky, mostly in Louisville. Living in New York forced me to walk more. New Yorkers are generally prolific walkers, and most of those miles being on hard pavement, they appreciate comfortable footwear suitable for ambulation. I lived for a time uptown in Manhattan, in the Dominican ethnic enclaves of Washington Heights and Inwood. Fort Tryon Park, which is like a geologic/ecologic sliver of the Appalachian Trail that got pushed down the Hudson River by ancient glaciers, forms a ridge line green space around Inwood. I loved walking there, finding myself under a vestigial canopy of trees with vistas of the lower Hudson Valley, including the relentless brick and iron of the Bronx. An Appalachian Trail hiker looking south from Bear Mountain in New York is looking toward Fort Tryon Park, a hundred miles away. Somebody is likely looking back from what remains of the woods in the City.

A few months before we married, my wife and I moved in together on my native Staten Island. Hiking in the Green Belt became a favorite activity of ours. Most people don’t think of New York City when they think of wildlife, but the populations of white tailed deer and wild turkey have rebounded to levels in the Green Belt that have sparked debate about allowing some kind of hunting to control populations. The Green Belt contains or is adjacent to the ruins of eighteenth century homesteads and an abandoned tubercular hospital. I cannot emphasize to you how glorious it is to get lost in the woods knowing that whatever direction you go, in twenty to thirty minutes you’ll pop out somewhere within the political boundaries of America’s most populated city. Many times, my wife and I popped out of the other side of the Green Belt, grabbed a bagel or Italian pastry in the New Dorp neighborhood, and continued our walk along the beach. Staten Island beaches have regained some of their ecological health over the last thirty or forty years.

Staten Island was a pedestrian’s paradise when Henry David Thoreau (author of The Maine Woods) lived there as a tutor one summer, long ago. The value of substantial urban green spaces and ecologically sound beachfronts have become obvious to many Staten Islanders in the wake of Hurricane Sandy. Something has to absorb the rain and the tides. People in the overcrowded northeast do not need much convincing to allocate land for reclamation by nature. To find ample space to stand among trees in relative quiet is something that can’t be bought as a private commodity in New York City. The rich may take a helicopter to an upstate retreat, but everyone else must make do with whatever green space is in close proximity.

A return to Louisville found me hiking in Jefferson Memorial Forest, an enormous urban green space. Twenty minutes from downtown Louisville, the wooded siltstone hills that encircle Jefferson County (aka metro Louisville) mirror similar formations across the Ohio River, in southern Indiana. There are vistas of downtown Louisville and the Ohio Valley in Jefferson Forest. There are trails that take all day to walk and numerous shorter trails. Wildlife is abundant. Dedicated to veterans, Jefferson Memorial Forest enjoys strong civic support from diverse groups throughout metropolitan Louisville. If it were not for Jefferson Memorial Forest, I may never have attempted hiking the Appalachian Trail. It was my training ground. My only complaint is that it is poorly accessible via public transit, requiring a long road walk from a bus stop along roads ill-suited to pedestrians. I have hope that will change.

Living without an automobile in metro Atlanta these days, I am a mere hundred miles from Springer Mountain, Georgia, the southern terminus of the Appalachian Trail. On a normal daily basis, however, I must make my walks in our old suburban neighborhood. There are many old trees and the wild life they support in our neighborhood. My wife and I take epic walks and we’ve discovered that much of our area is connected by marginal green spaces along the south fork of Peachtree Creek. There are efforts to formally connect these spaces, but as a de facto matter, I can travel to different sections of the neighborhood via trails in marginal wooded lots. Some of these are parkland, some are probably railroad land or unmaintained county property. The current options and future potential for pedestrian greenways is exciting.

Recently my wife and I volunteered an afternoon of vigorous labor picking up trash and chopping out invasive species of underbrush in Ira B. Melton Park, one of the aforementioned green spaces in my neighborhood. Bug bitten, scratched and sweaty, I felt a wonderful sense of community and purpose trying to further efforts to make an old bottom land dumping lot where a railroad bridge crosses a polluted creek function as green space– a safe place to find the sanity and wellness available in nature. Melton Park is no Baxter Park, but it has hiking trails that connect to other trails in other parks and shady side streets, and the voices of birds and the colors of mushrooms and flowers provide inspiration to dream of places of Baxter Park. (I’ve been dreaming hard lately too). 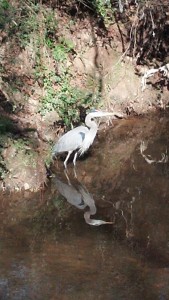 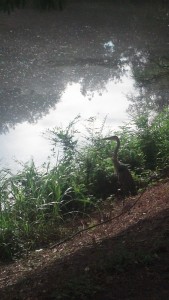 I have come to a place in my life where I am convinced that “normal” life should resemble trail life as much as possible. By that, I mean, the hiker modes of living that are so rewarding, so sane and healthful should be applied to urban living. Rather than fending off the encroaching cities from the mountain wilderness, maybe some wildness should be injected into the cities– cities with many more miles of dirt track; expanding green space for more wildlife habitat; cities more friendly to walking and less friendly to driving.

As I write this in the afternoon, I can step out of my house to take a walk, and as it occurs every weekday, there is standstill traffic. I can walk faster than the cars move. The people sit in their cars looking angry or depressed. Half of them are looking at their phones from behind the wheel. I walk past the running cars, turn the corner onto a side road away from the car fumes, and in a few minutes I’m in Melton Park. The garbage washed into the south fork of Peachtree Creek has its origins from trash tossed by drivers. (This is the same trash I pick out of my front yard.) The hydrocarbon rainbows in the water in the creek after storms is a result of automobiles. There are tires stuck in the silt of the creek from the Nixon administration at least. I just wonder what cities would be like if we redesigned them around nature and walking. I wonder what cities would be like if Leave No Trace principles were applied there.

Most of us visiting wilderness areas come from urban areas small or large. We plan for months or years or decades to visit these places– “to get away.” What do we find when we get there?  Many times, we find people just like us. We come prepared. We share space respectfully. We hike. We mind our impact on the area. We hone our body’s energy– we discover through walking that our bodies are energy! We absorb the sanity in the wild order of Nature. We go there to be ordered by Nature. Conversely, cities are where humans have imposed their order on Nature. What if we bring what we learn from wild(er) places back into cities? With what we know about the carbon fueled combustion engine and the environment, about the hazards of sedentary lifestyle, it would seem to me the future of urban civilization will be found on a hiking trail.