I must first apologize for my MIA status and lack of updates, I’ve been out saving the world, you see. Clark Kent by day, Superman by night. If I were a guy… Anyway, I must have got carried away because I’ve only just put the cape to bed.

I got to the cabin last night and decided to take a zero here this morning. Eh, let’s call it a mental health/reflection day. After all, I’ve not long got back from a seven-mile round trip that had me sipping that good stuff (hot chocolate) at Dunkin’ Donuts, so it’s more like a nero than a zero. Let’s just ignore the fact that I’ve walked zero trail miles.

I really haven’t been in the mood for blogging as of late if I’m being completely honest. I’ve been dealing with emotions. Gross, I know.

PMS is usually associated with females and that ungodly week of every month where chocolate and ice cream need to be stockpiled to avoid tears, meltdowns, and an award-winning theatrical performance.

It’s also used in jest to describe a drama queen who’s crying over spilled milk. Spilled milk never hurt anyone; give that diva a Snickers bar! Saying that, it’s a tragedy in my opinion, but you get the point, right?

Why is she talking about PMS and why am I still reading? Is that what you’re asking yourself? I would be too but I have a point, I promise. No need to avert your eyes and attention just yet lads.

I’m talking about trail PMS! You may not have heard of it but I can assure you that it’s a thing. Roller coaster emotions have plagued me this last week and it’s not that time of the month.

Loneliness, sadness, happiness – you name, it I’ve felt. As I’ve said, it’s only been this past week or so. I’d go from having a great day one minute to almost balling my eyes out the next. So what on earth was wrong with me? Why was I being a total girl? Today’s given me the chance to really reflect on and pinpoint the cause of my distress. I’ve managed to narrow it down to five main things:

If you follow my Instagram you’ll see that I had a special trail angel pay me a visit. Said angel provided a gourmet resupply, played chef, and accompanied me on trail for two days after we chowed down on an amazing steak dinner in town. I had been spoiled and was on a massive high. With his leaving I’d realized just how much I’d missed him. I wasn’t ready to say goodbye.

I’d also been third wheeling a married couple like an absolute boss since Monson. If you ever need advice on how to do that hit me up. I’ll gladly share my secrets. I didn’t know it at the time, but the day after I said goodbye to the boy, I’d be saying goodbye to Al and Alex. They were taking two zeros to adventure and recover but my show had to go own. Alone.

Change shouldn’t cause such an upset, not when you’re hiking 2,190 miles through 14 states. Change was inevitable. No two days would be the same, I knew that and I was OK with it, so why was it suddenly an issue?

I’d gotten used to hiking ahead during the day, lunching alone, and meeting them when they’d arrive at camp. Being alone in the day I can handle; it’s therapeutic and gives me time to collect my thoughts, or really not think at all (not to say I don’t enjoy company while hiking too – I do) but the thought of being alone in the evenings is unsettling which brings me to point two.

Oh, the things that go bump in the night. Back home in the woods I might run into a fox or a badger. Perhaps an overeager mouse who is just dying to say hello, or maybe a pesky squirrel with an unjust resentment of us humans. The threat of animals is, or has always been, minimal. Not that I have any real expertise in the forests at home; I just know we don’t have bears or coyotes running about the place.

Here, on the other hand, is a little different. Strange and mysterious noises fill the walls of the shelter when you’re trying to sleep. Pitch black darkness accompanied by sounds I’ve never heard before (that appear closer than they actually are) are child’s play for my overactive imagination. Hiding under the covers (sleeping bag in my case) doesn’t work. My childhood was a lie; covers do not protect us.

Add seeing your first bear and coyote on trail to spending your first night alone in darkness and you’ve got yourself a recipe for disaster. At least for me. Yes, yes, I’m a wimp!

Luckily I’ve only slept completely alone twice. Croatoan and Carrot Top have rocked up to camp several times to stop the panic attack I was close to having. A good job, too, as I didn’t have a brown paper bag on hand.

This I will get used to in time. I have no choice. Unless I’m reunited with Al and Alex, which isn’t that unlikely. They’ll only be a few days behind and I’m taking a zero.

I wasn’t aware at the time, but I’d been developing a nasty case of the man flu. Change in weather is a bugger. I’m a little bit of a drama queen when it comes to being sick, can you tell? I decided to nero into Kent, CT, and take the afternoon off. Doctor’s orders. Doctor being me, of course. The rain, unforgiving dripping nose, and want to do laundry had made the decision quite easy.

I’ve always had an issue with my weight and how I look. I used to be a lot bigger than I am now so I suppose my body conscious self stemmed from losing weight. “Hey Amie, look at this picture, remember when you used to be fat?” Old photos are the worst, but they’re also a good reminder. I wasn’t happy with my weight before I started the trail, in fact I joked about how I’d walk myself skinny/skinnier. We all have parts of us that we’re not happy with and this is mine.

My food consumption since starting the trail has probably doubled, if not tripled. The thought of how many calories I eat in a day is daunting. “Don’t worry, you’ll burn it off with the amount of miles you’re walking.” Will I? Probably. Maybe. Who knows? What I do know is the appetite I have isn’t easily squashed and most of what I eat on trail is junk food. Perhaps I just need to address the latter. I don’t think I’m going to get fat, but it plays on my mind and weighs me down at times. Mostly when I’m upset/worried about other things. All of this said as I’m eating pizza. My own worst enemy!

I’ve had several days when I’ve planned to hit big miles and well, just didn’t. I’m on a visa and the timeline I have is always a factor on where I should aim to get to by the end of the day, week, or month. I beat myself up at times if I don’t quite manage to walk my intended miles and that automatically puts a damper on the day.

I had a good conversation with my sister earlier today. “Amie, who do we know that would even think about going to hike for two months? Even if you came home tomorrow what you’ve done is amazing. No one can judge you.” She’s right.

I was worried about what was going to happen with the hurricane that’s rolling in on the East Coast. I have no idea how it will affect the trail and what that means for the rest of my thru-hike. Or if I just can’t put in the miles I need to finish before I get booted out of the country. Darn visa! What if I couldn’t finish? I’d have failed. How would I be perceived?

“Who cares? You just come back another time and finish it!” She was playing the wise older sister well today, I give her that. The thing is, everything she said was spot on. I’m not hiking the AT for anyone but myself. I need to start caring less about what other people would think. If for some reason I can’t finish the trail, then I can’t finish the trail, and I’ll just have to do it at some other point in time. If I get to Harpers Ferry and decide that’s enough for me (hopefully not) then that’s enough.

Luckily, despite my trail PMS, I’m still enjoying my time on the trail. I’m going to have tough days, days when I question what I’m doing here, and days that will just outright suck,but  that’s an inevitable part of life. Of the trail. If it wasn’t happening here it’d be happening elsewhere with whatever I was doing. Hence trail PMS!

Taking today to just chill out and gather my thoughts has made me realize that this is where I want to be right now. I’m still having a blast. The moment bad days start to outweigh the good days I’ll reconsider, but until then, the hike must go on. So there you have it, my reflection and account of experiencing and identifying trail PMS.

I will continue to blog properly from tomorrow, promise!

Before I go I’m going to share some of my favorite pictures/memories that I’ve taken/made since my last post. 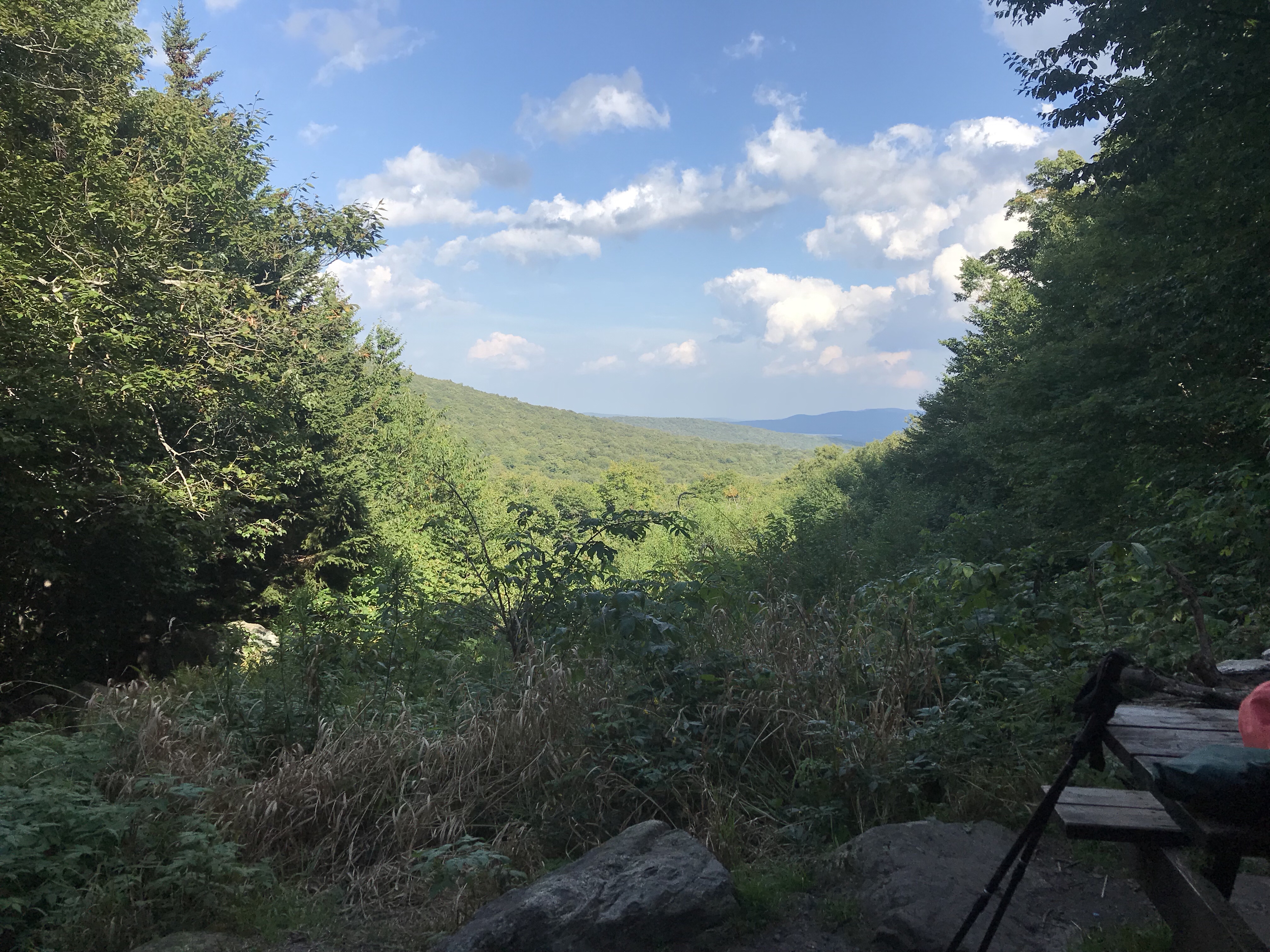 How often am I going to get to fall asleep with views like this?

From a zero in Bennington to 600 miles and a state crossing. 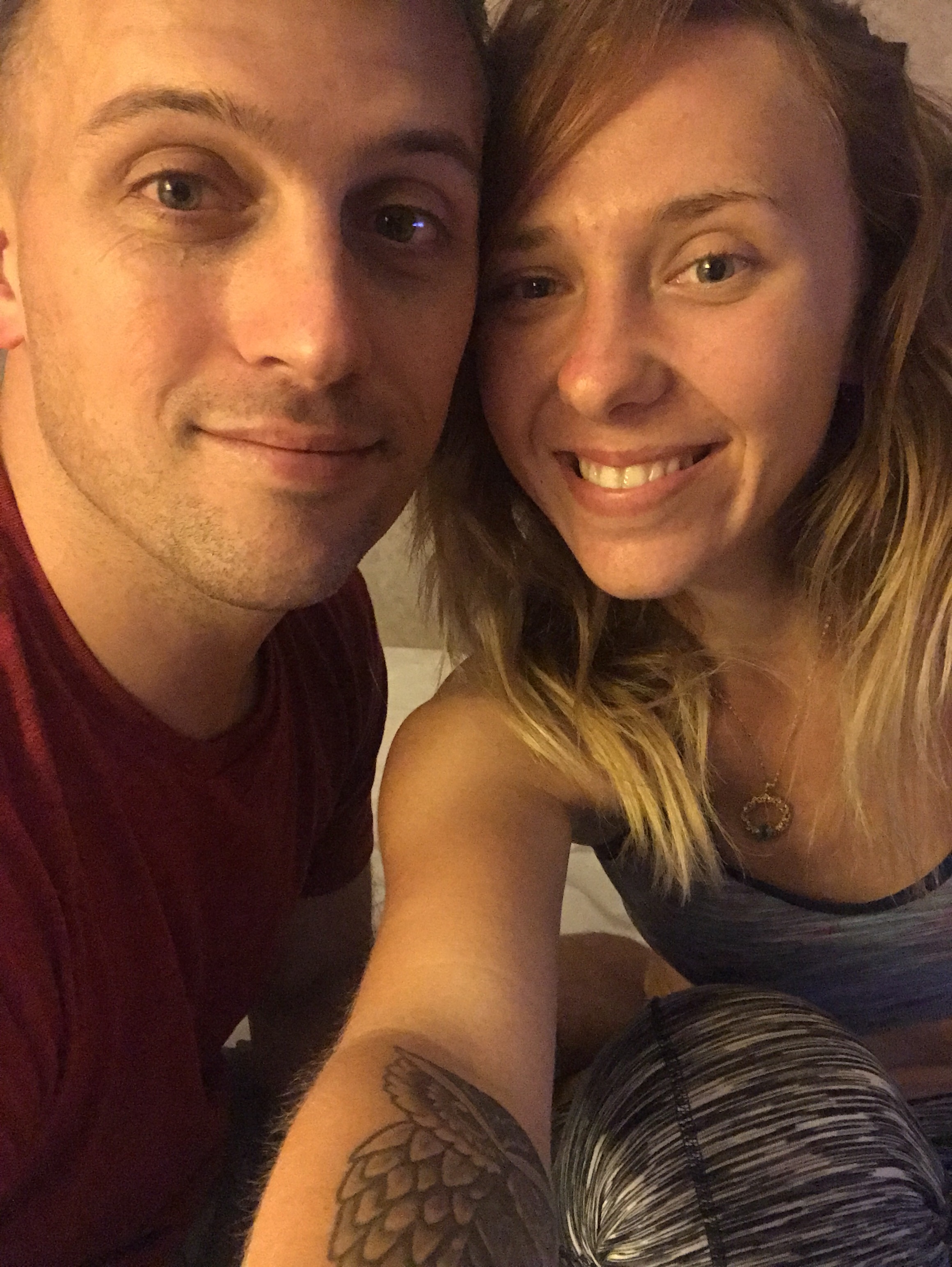 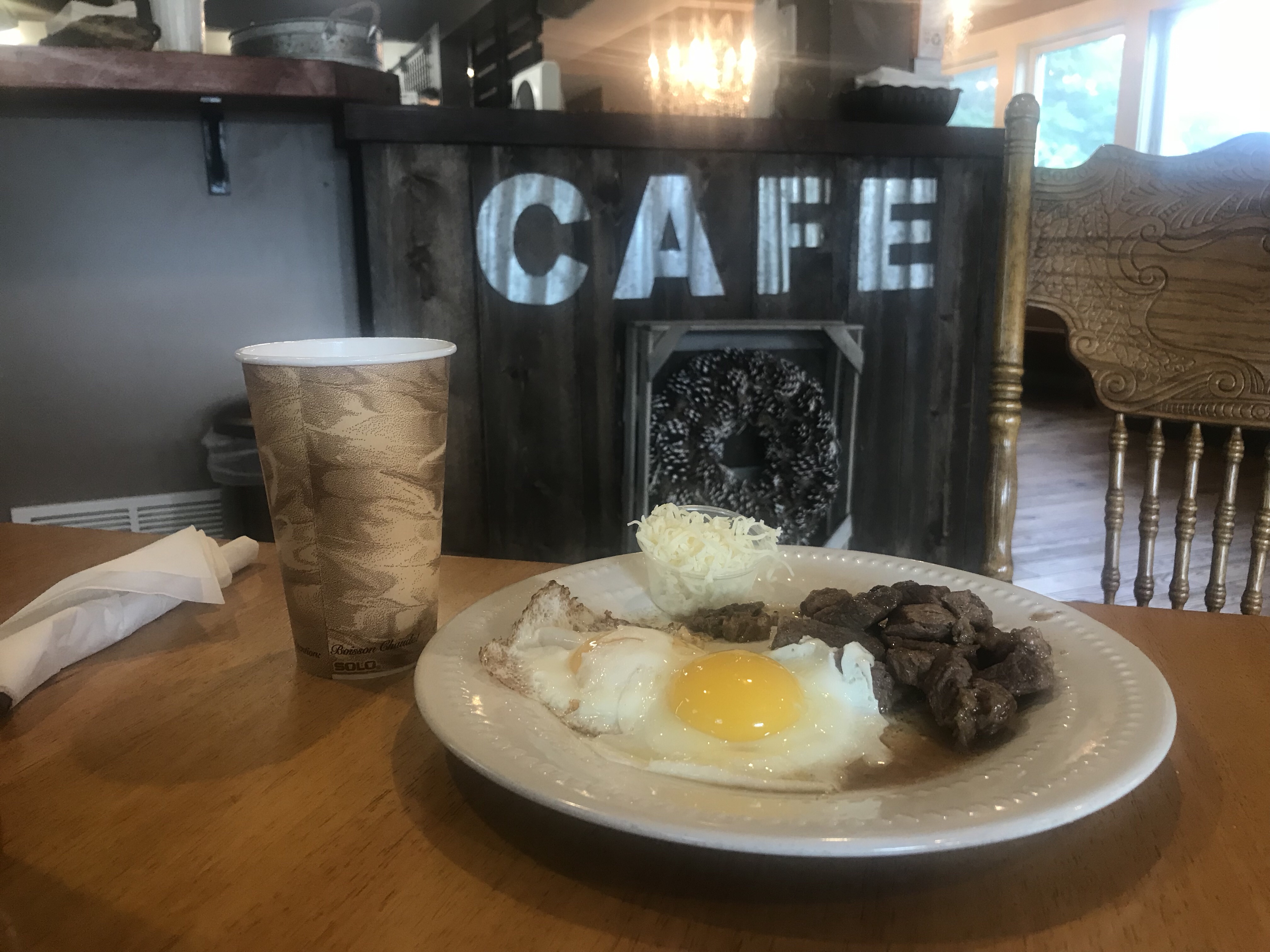 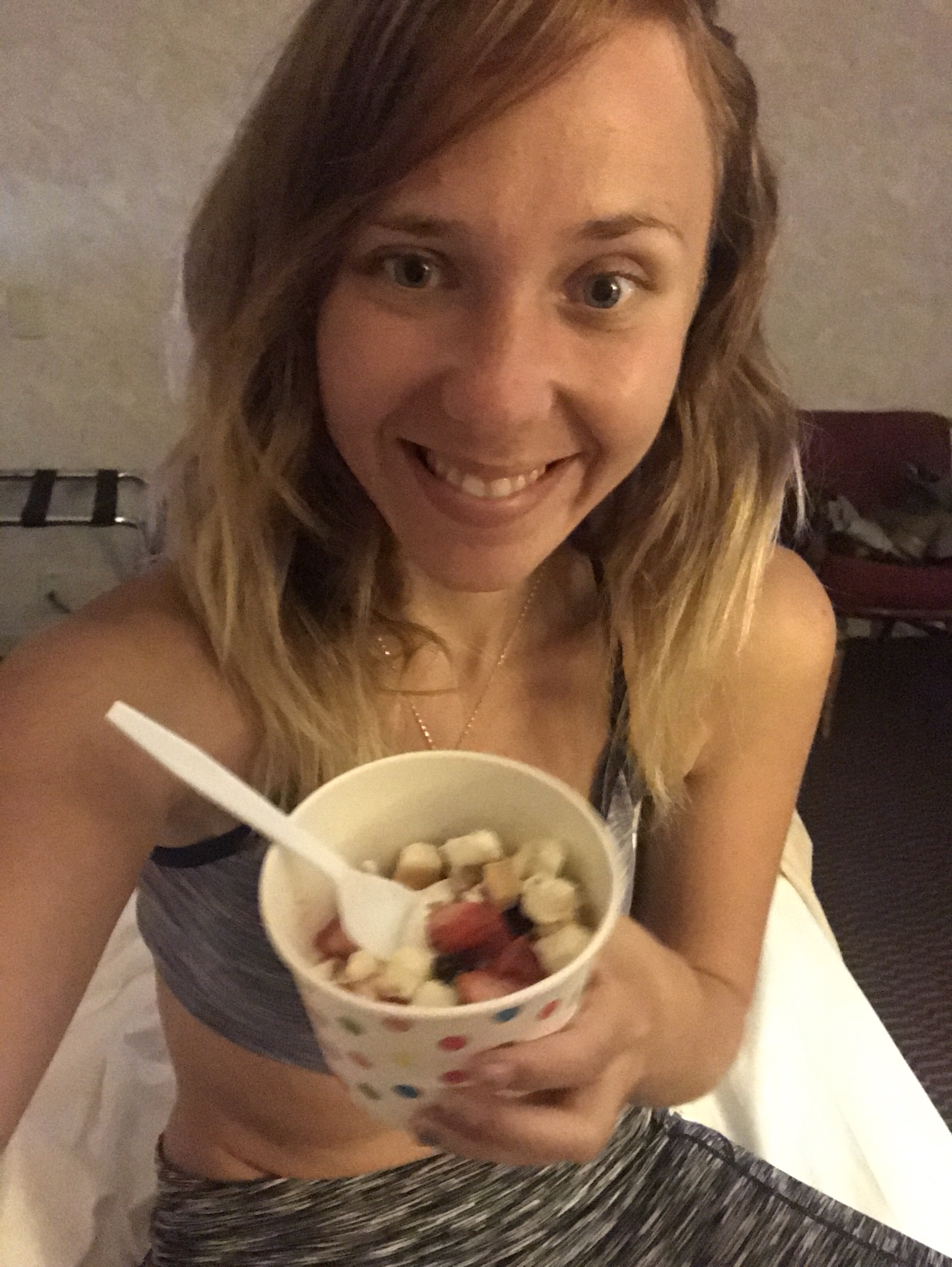 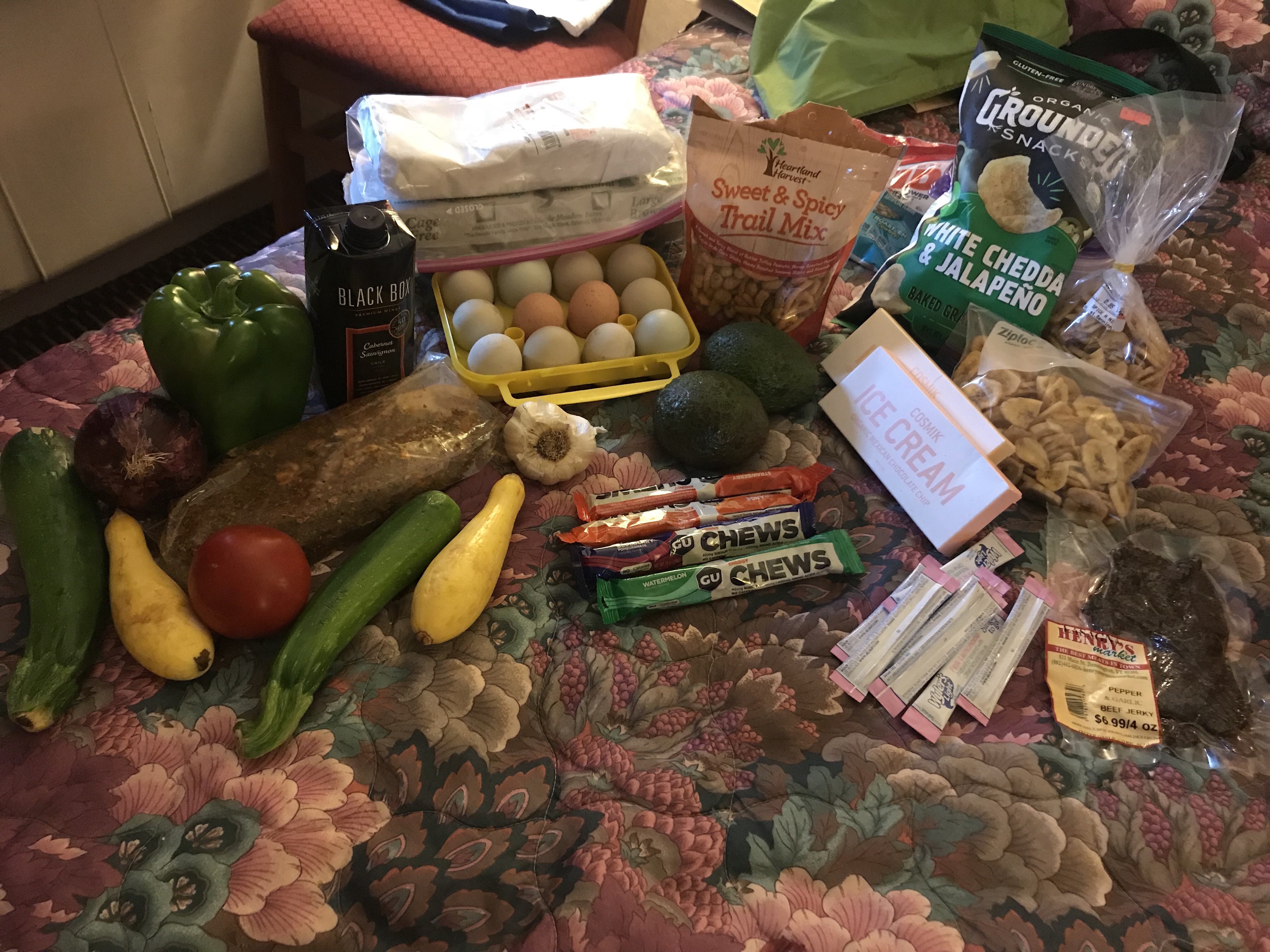 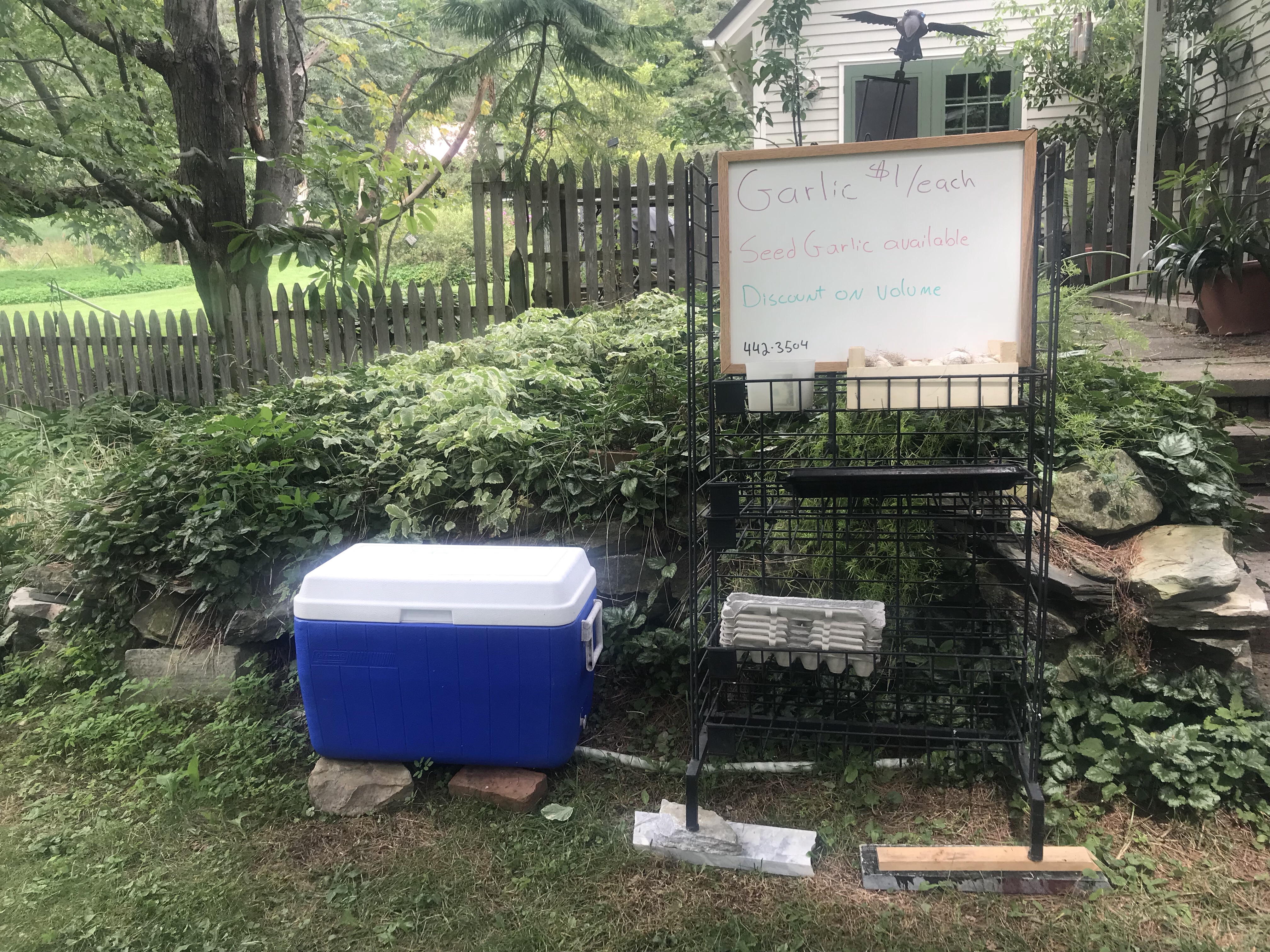 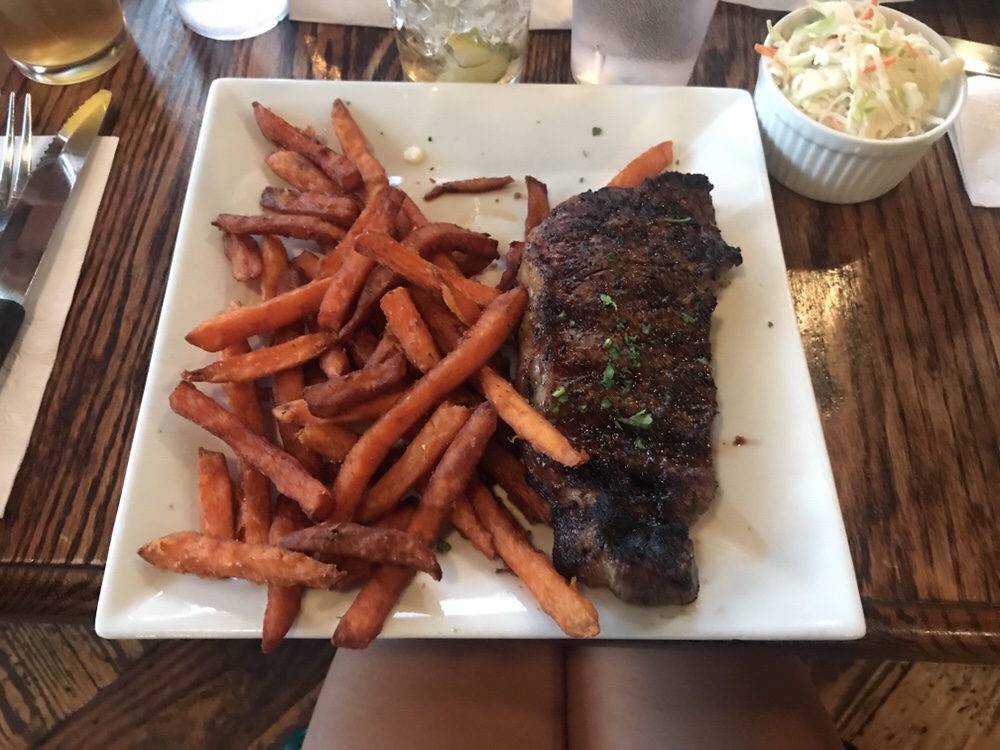 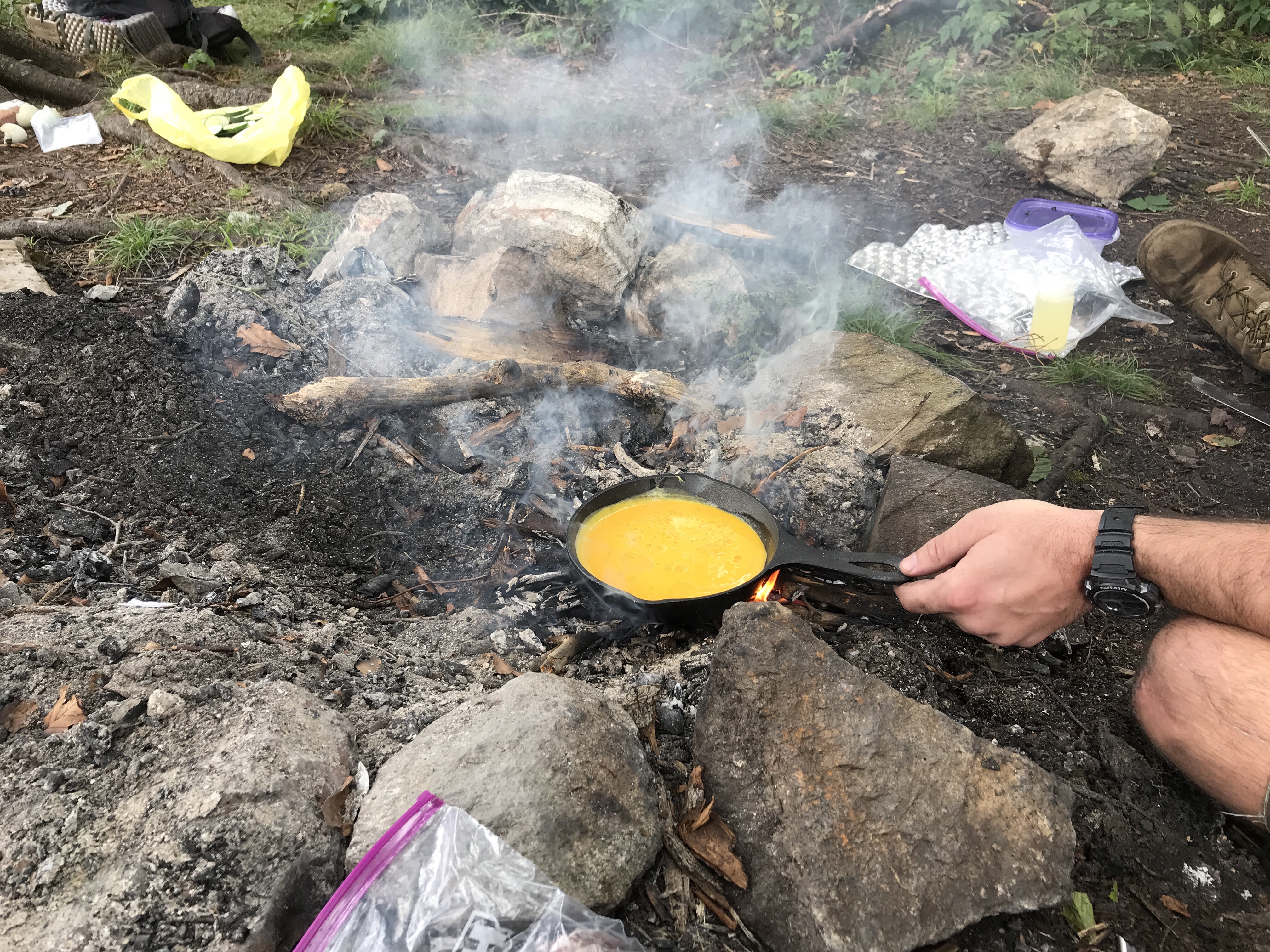 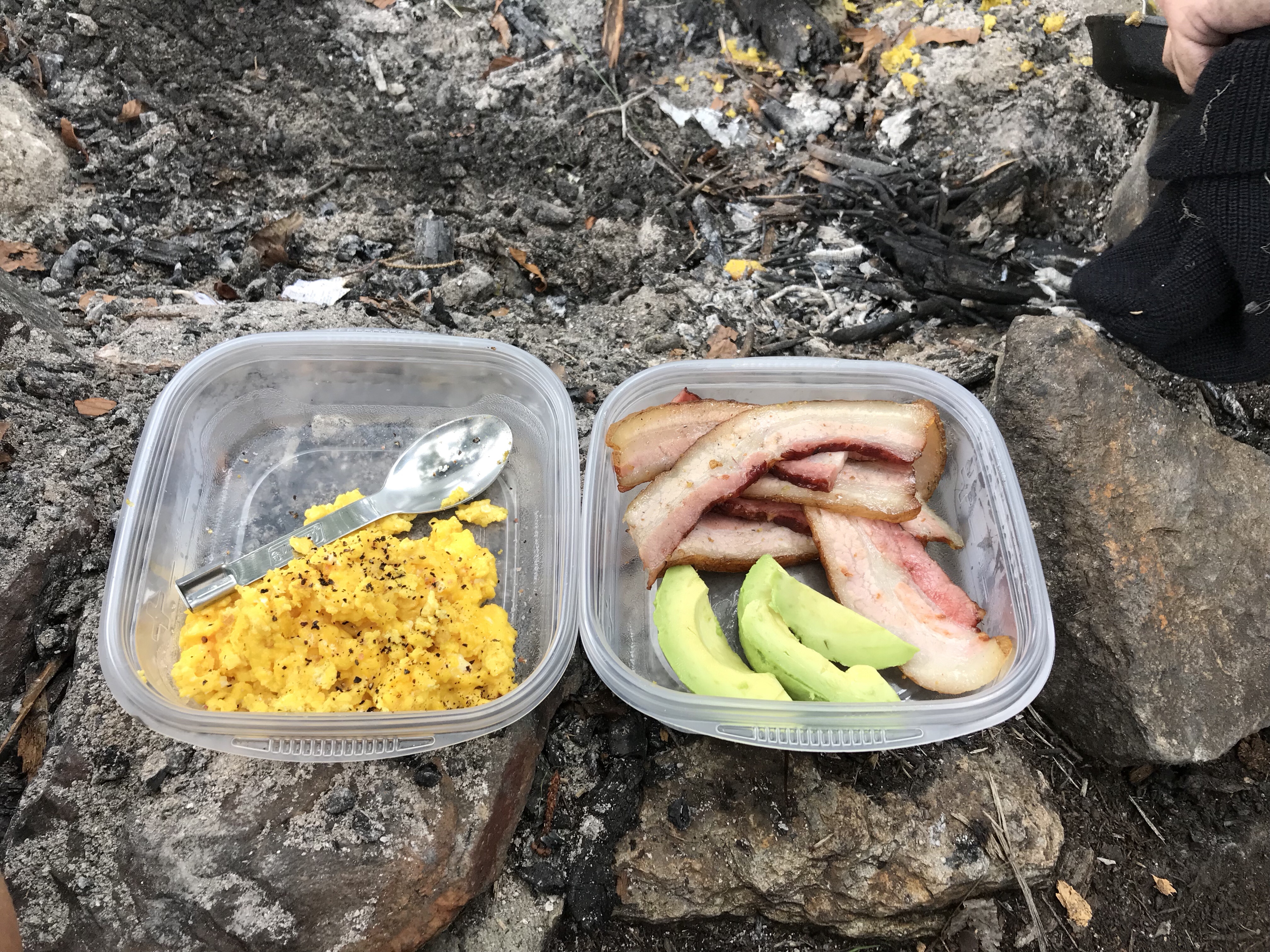 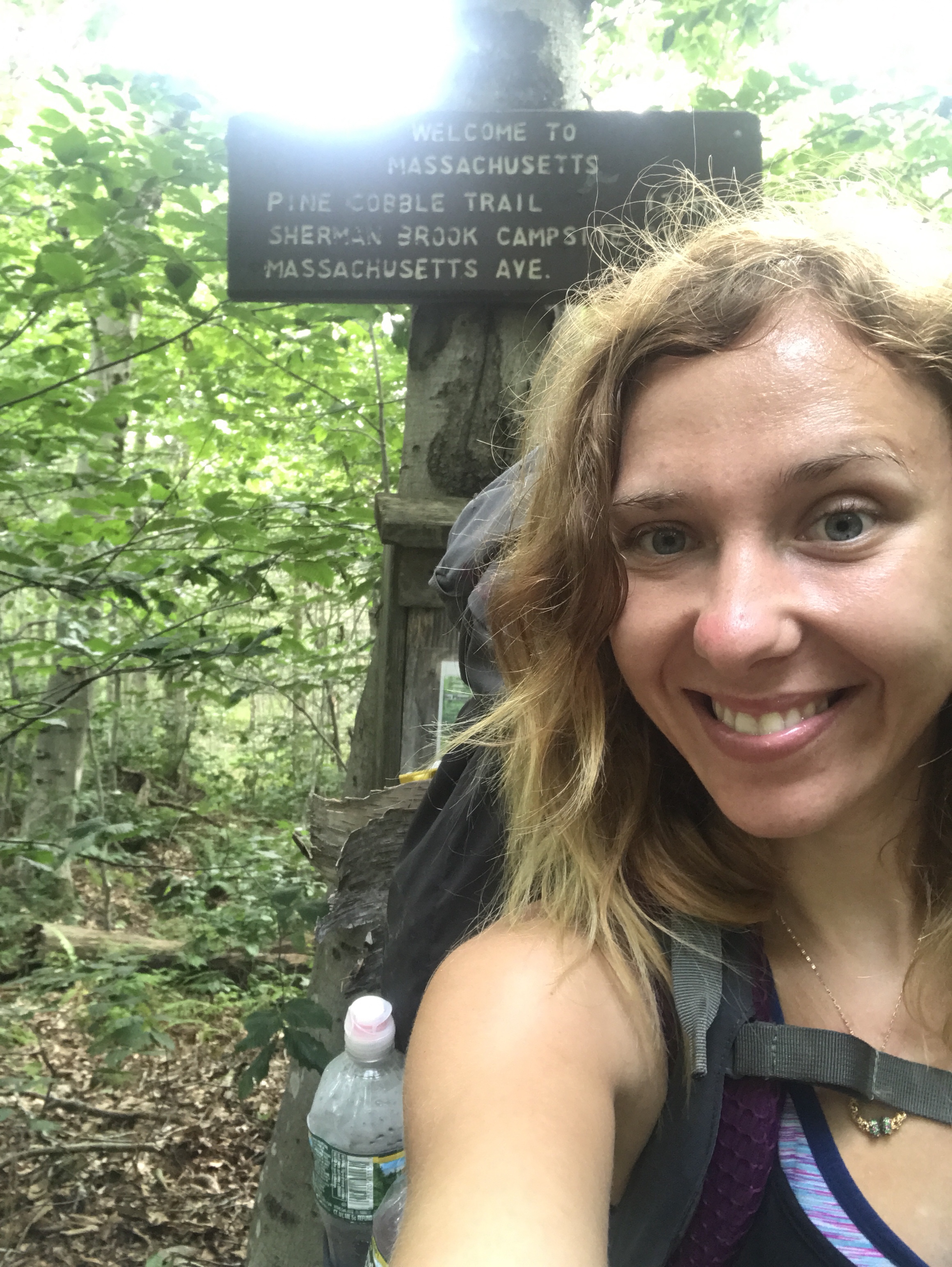 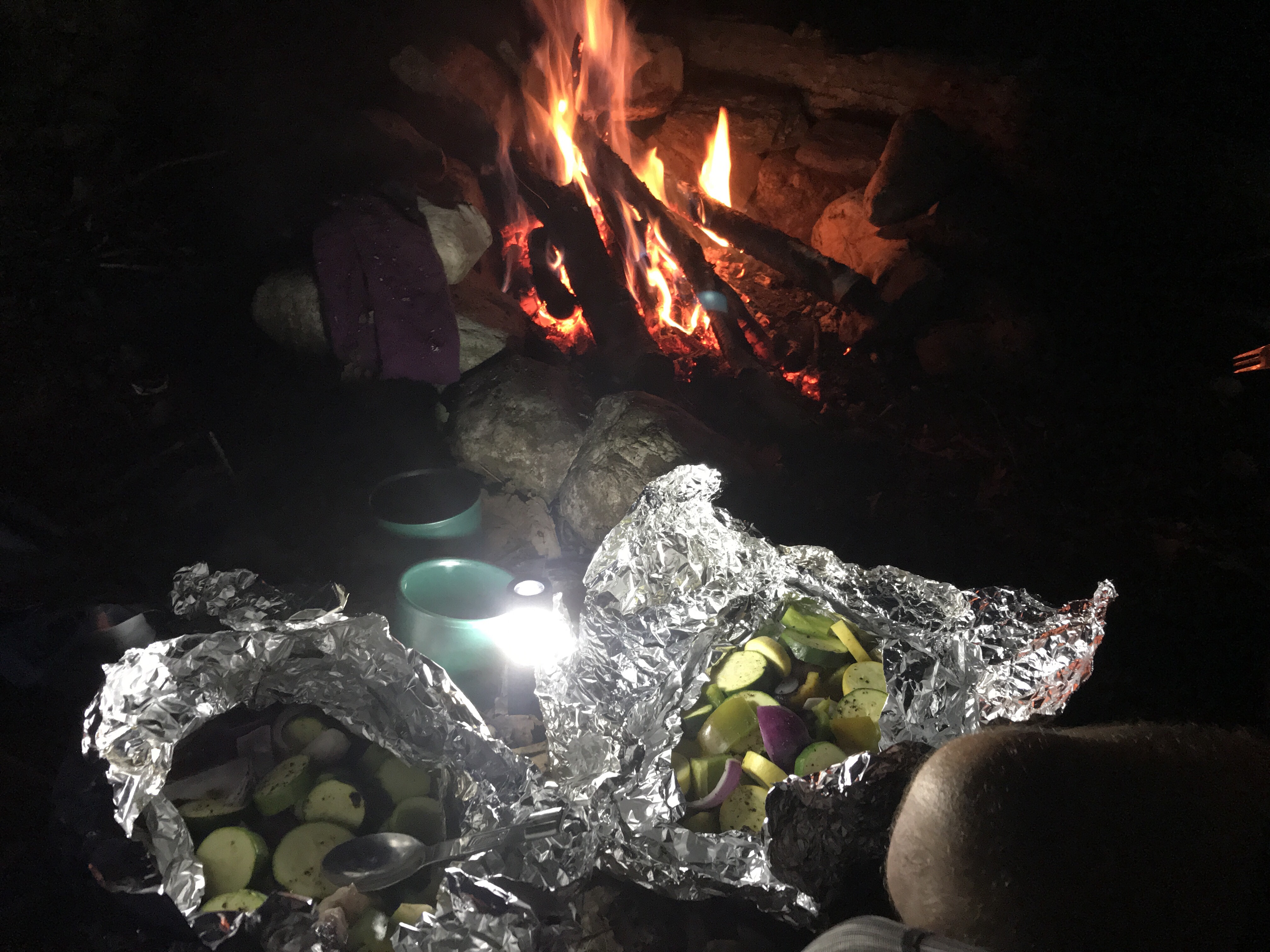 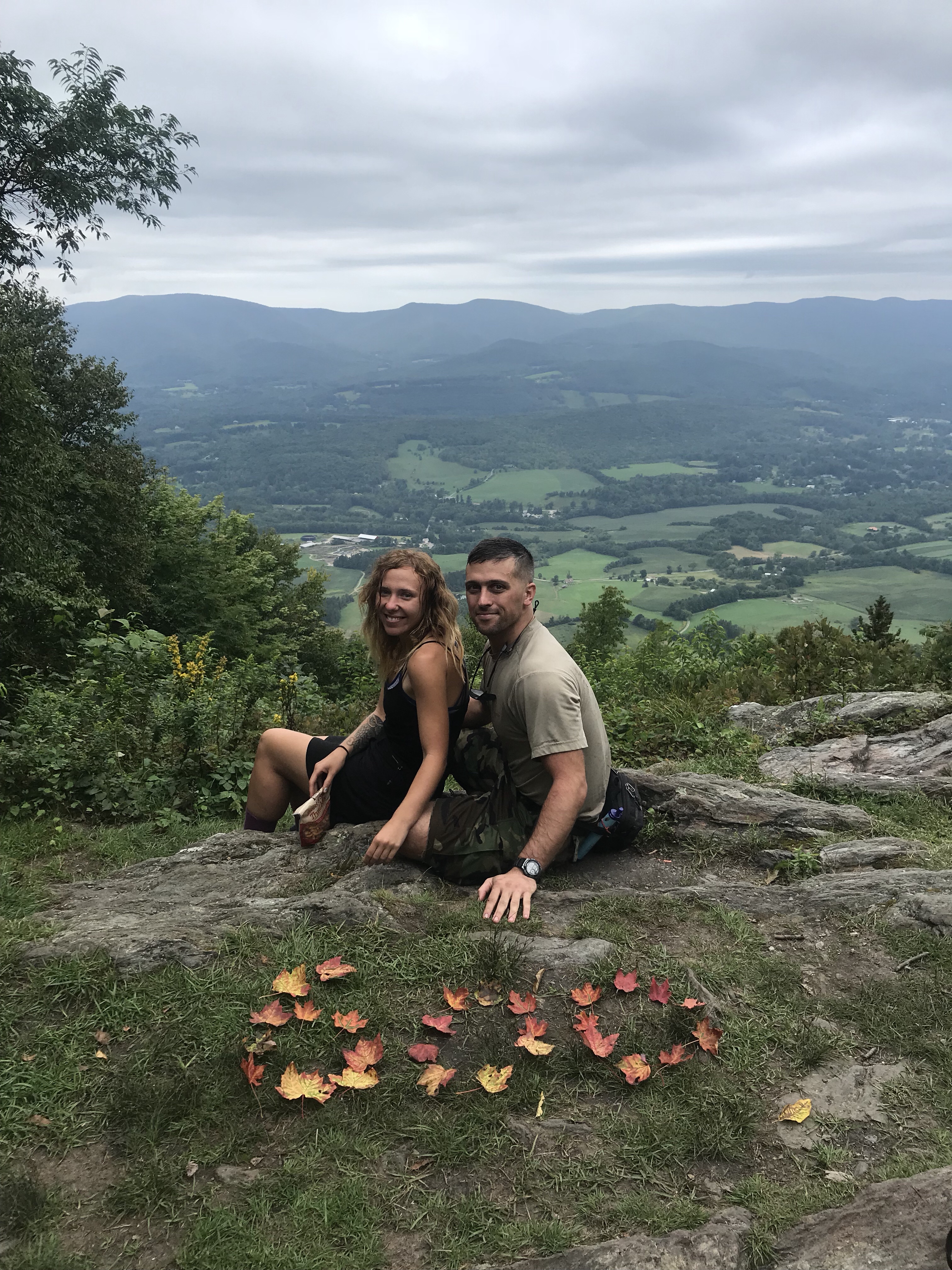 This little gem was a much needed pick-me-up. 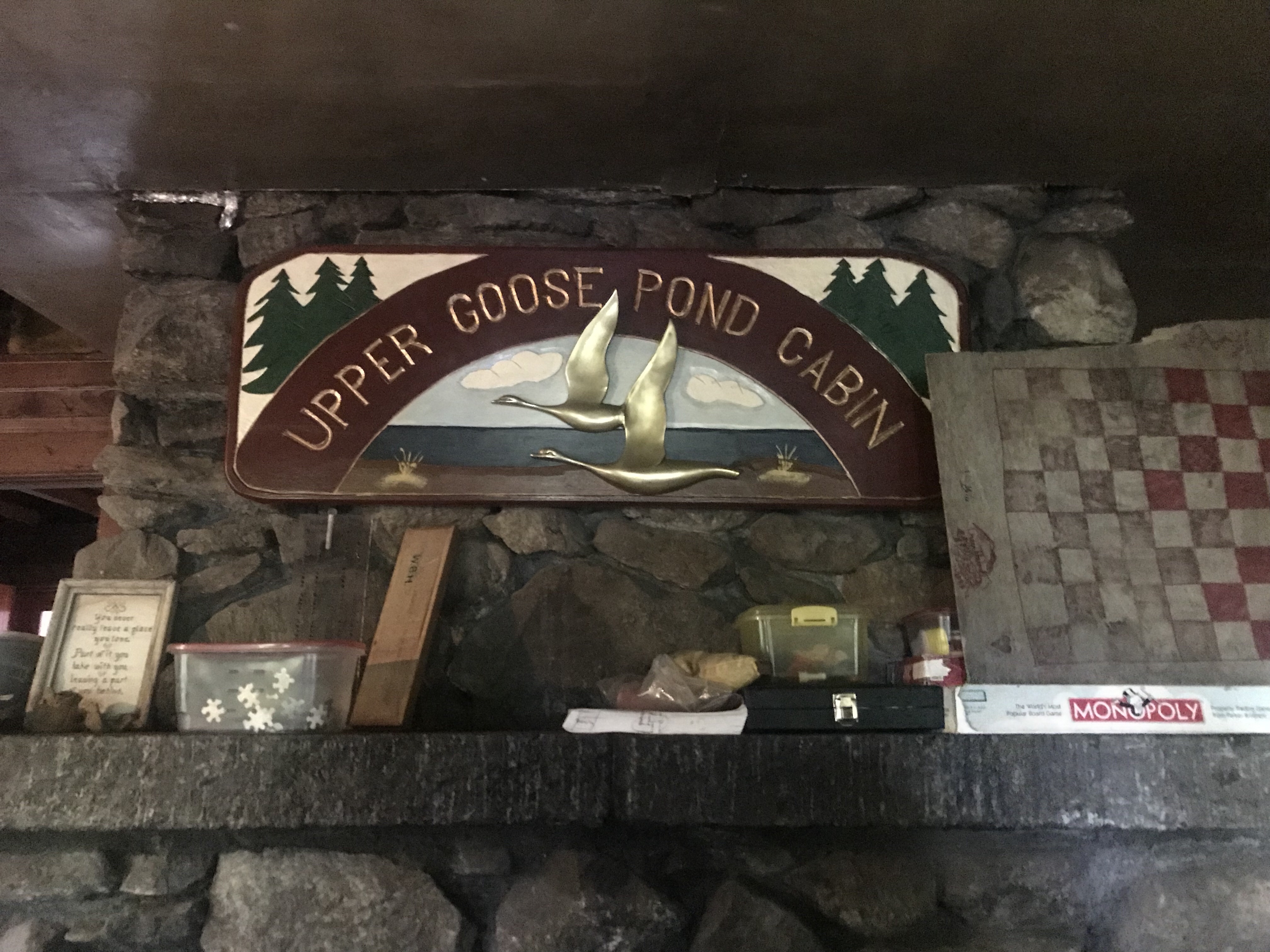 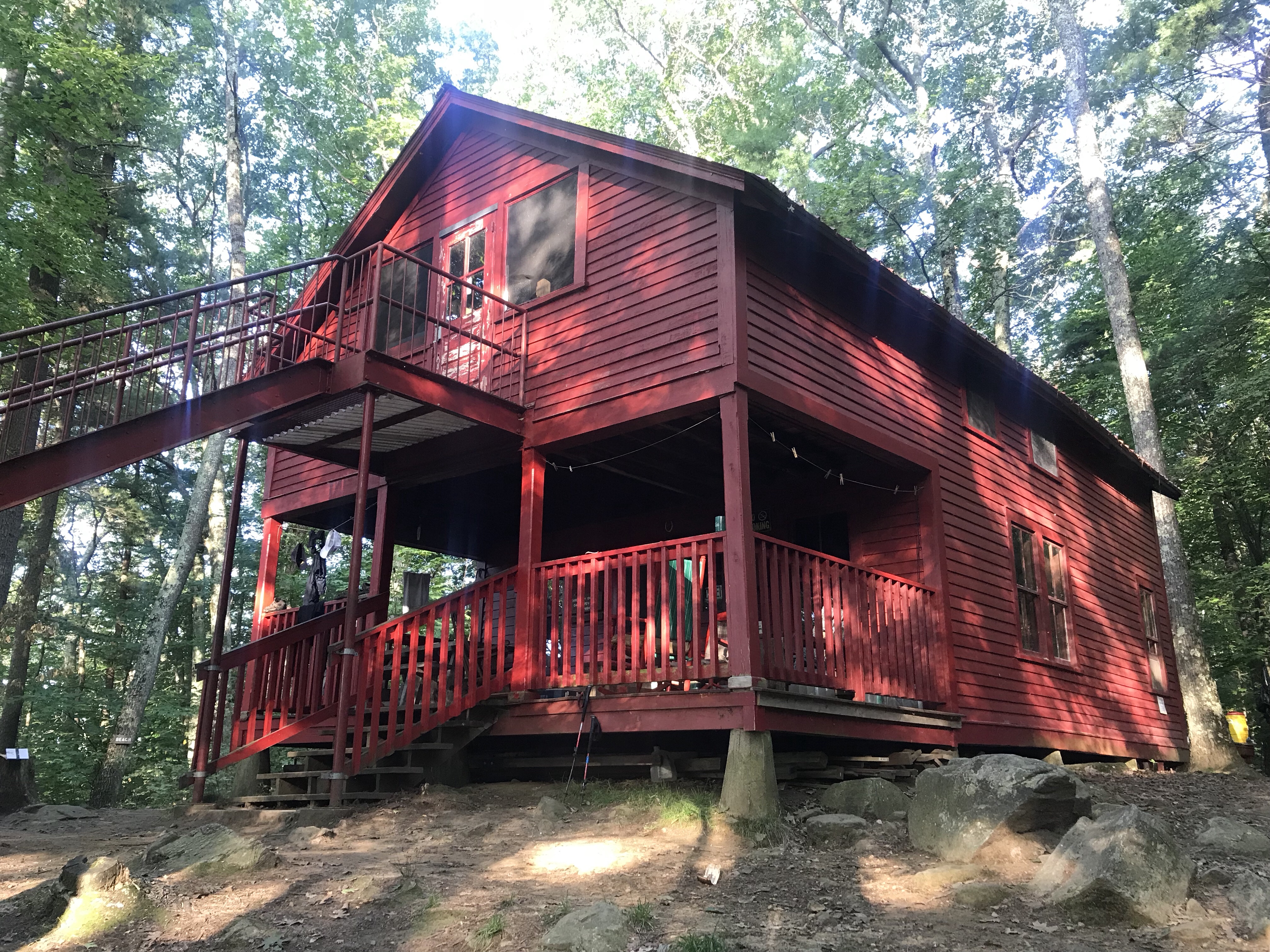 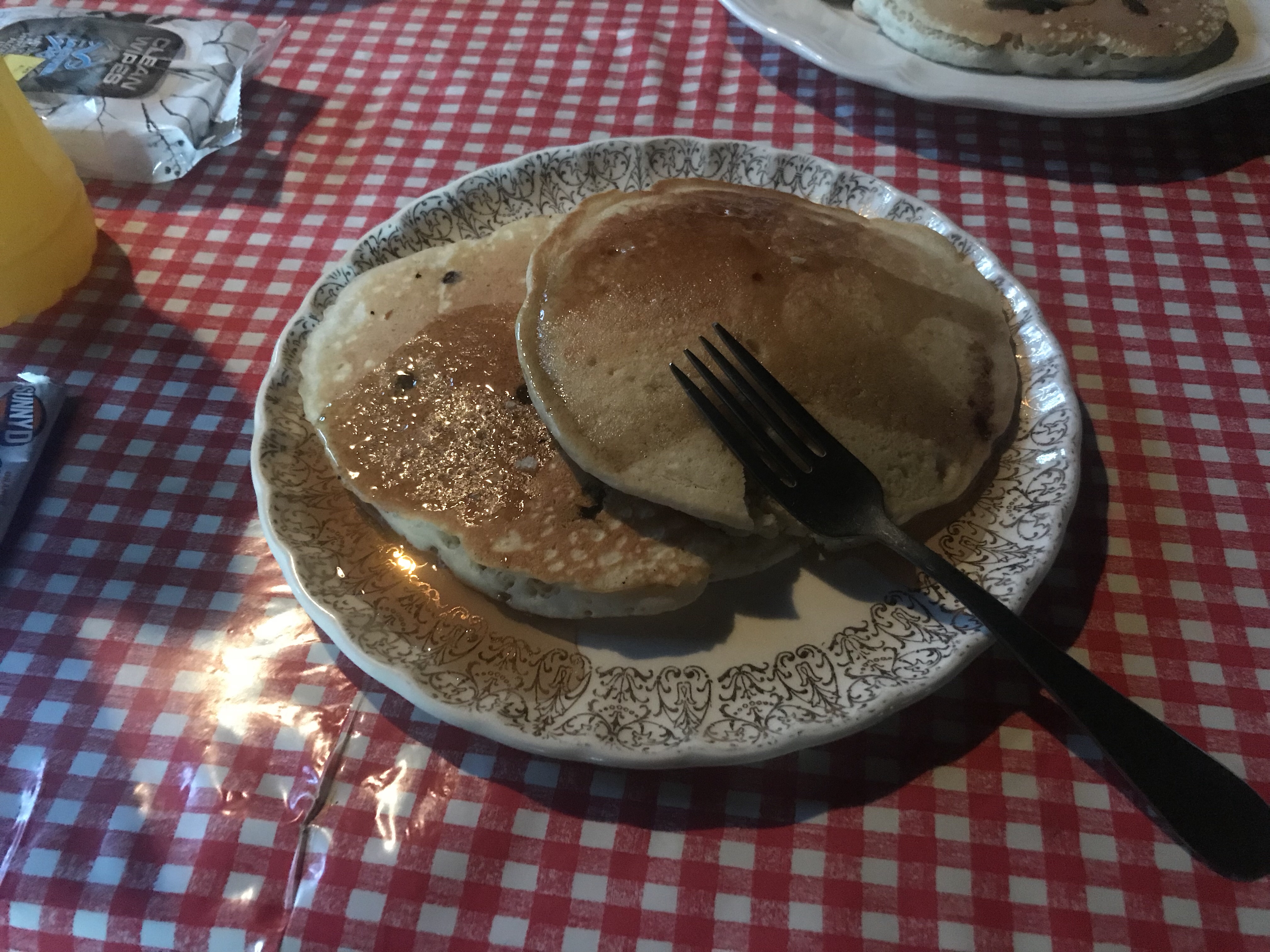 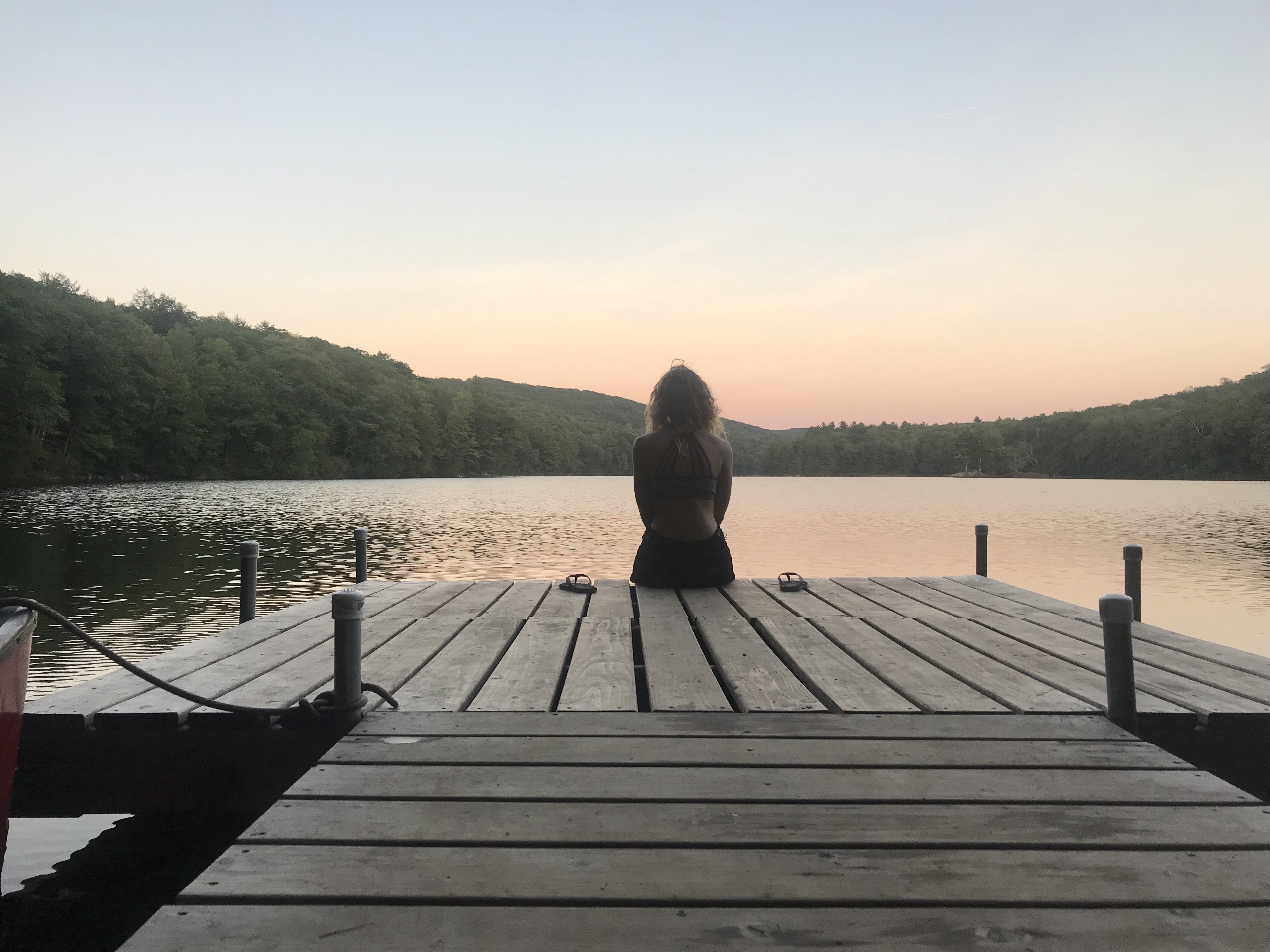 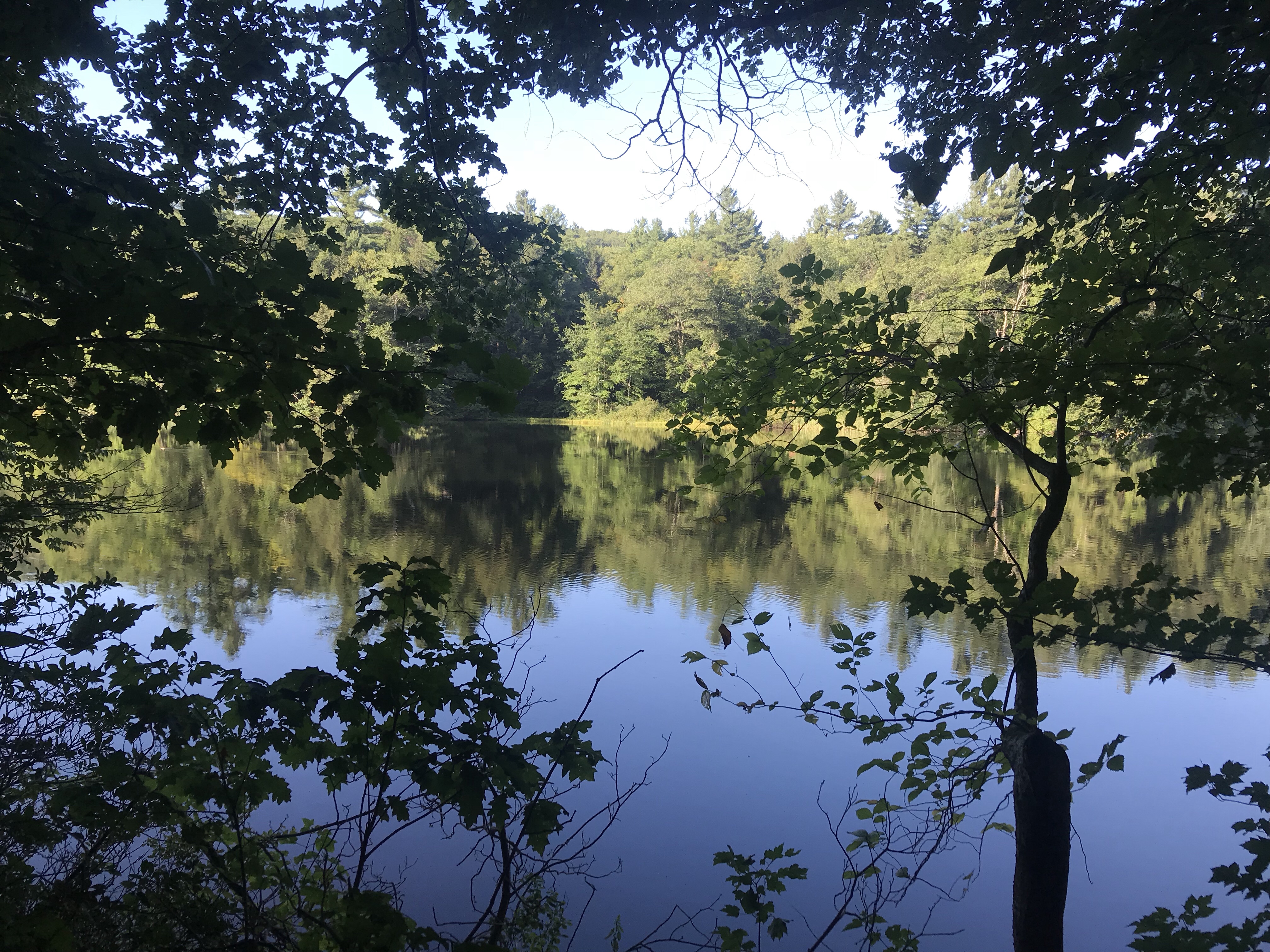 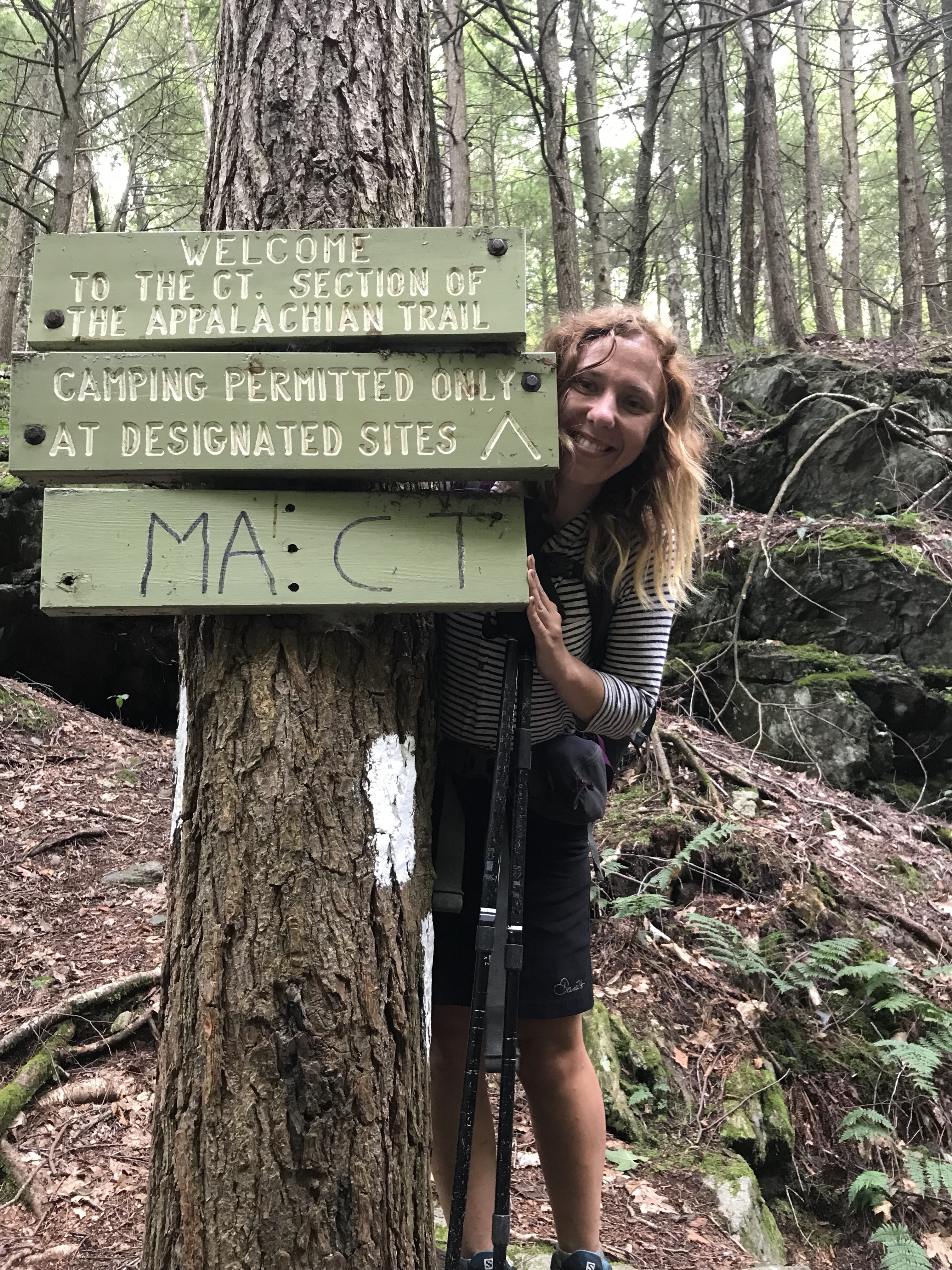 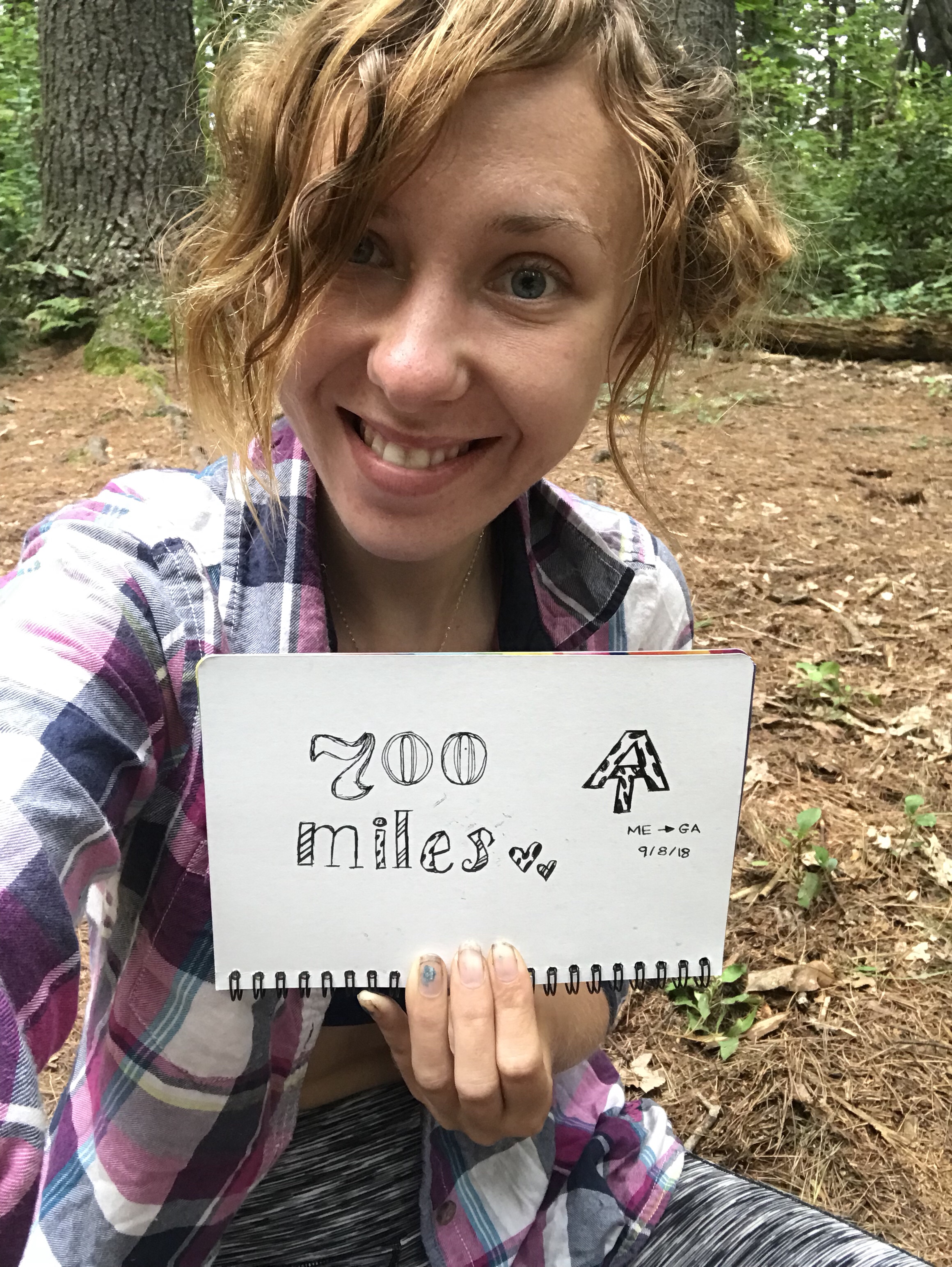 What more can a girl ask for when she’s sick? 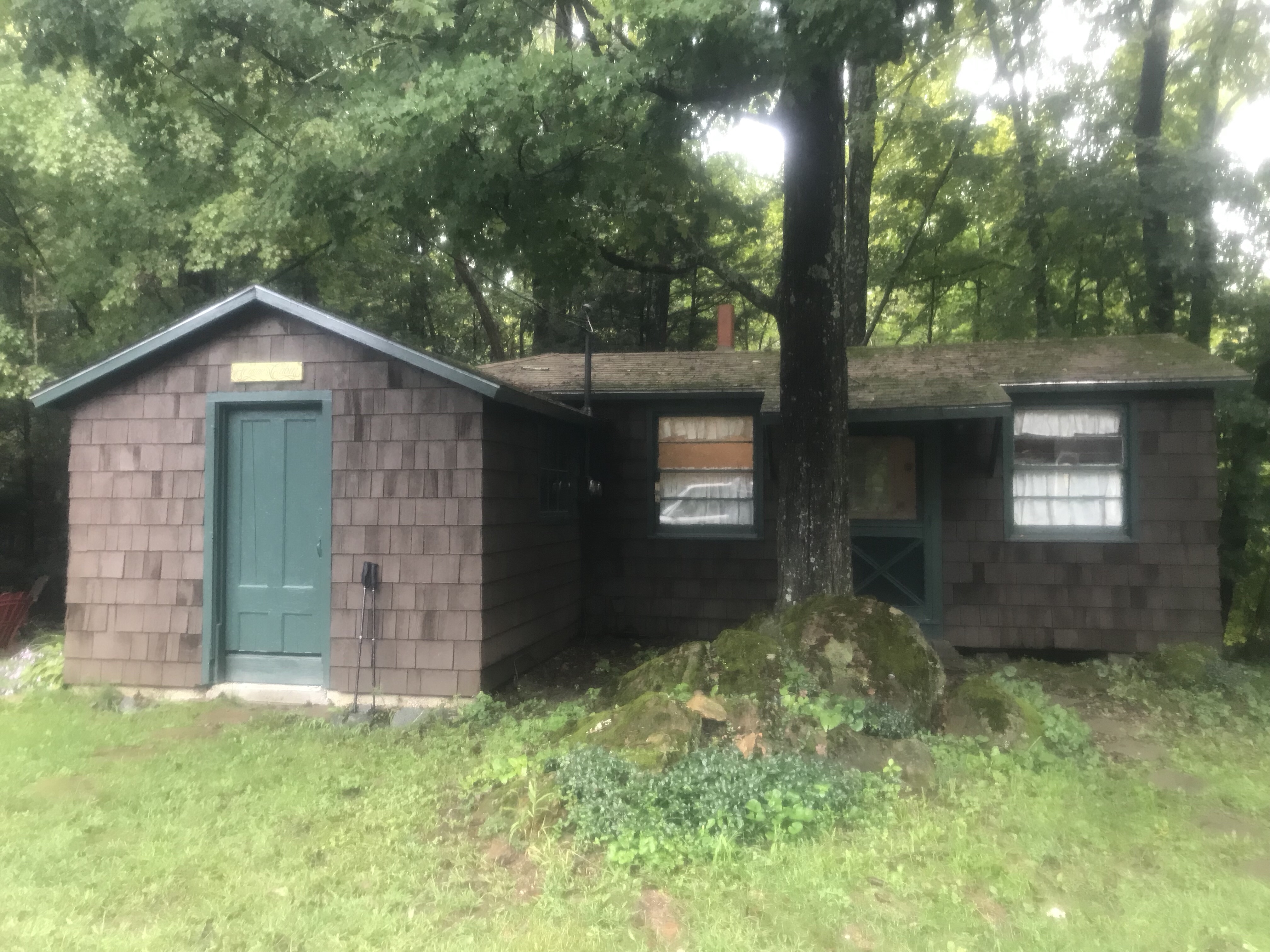 Another state, another zero

Ticking another state off the list is always awesome.

Getting pizza delivered to a shelter is also awesome.

Taking a zero is, have you guessed? Awesome! 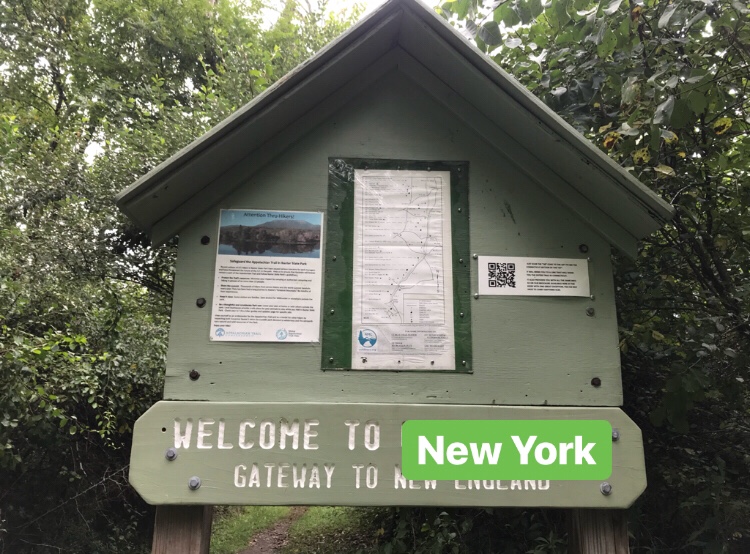 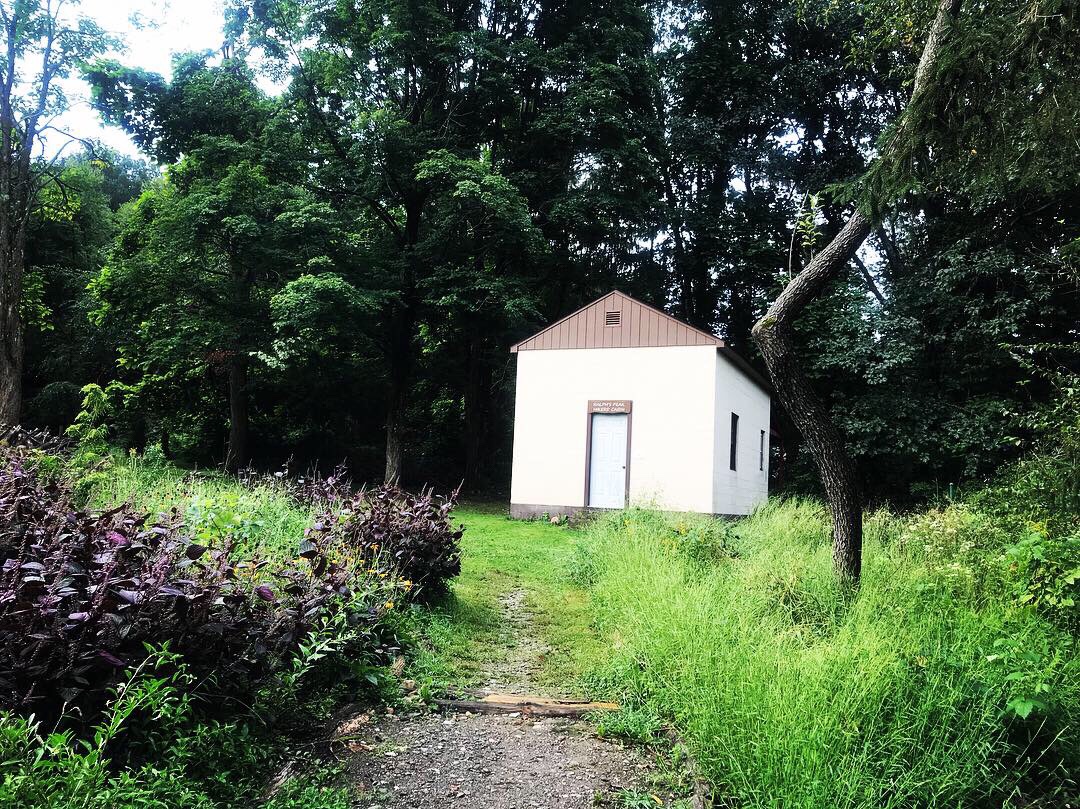 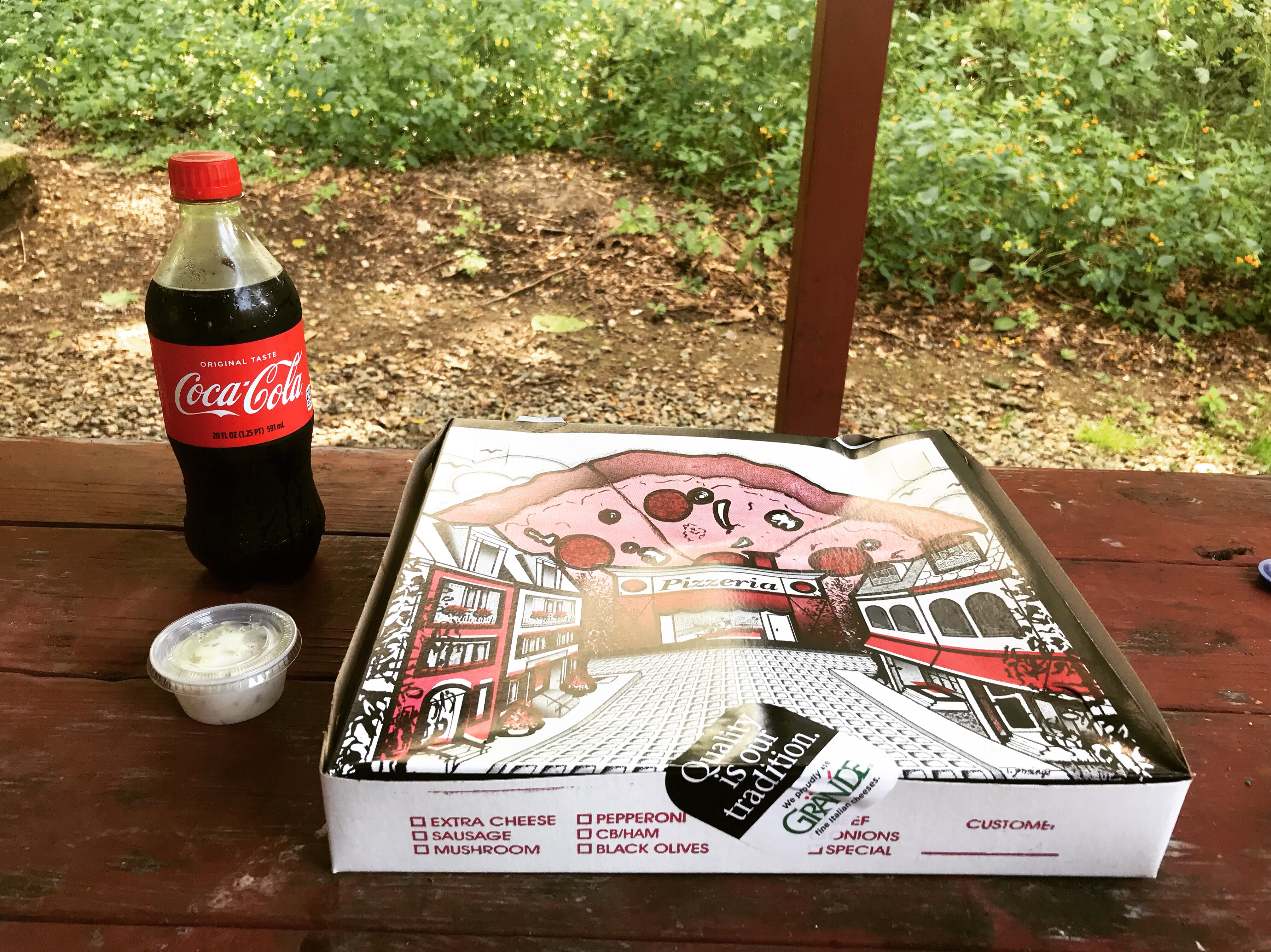