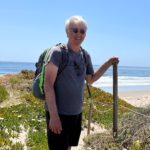 Talk about making an entrance.  Massachusetts hits you like the opening power riff of a song like Steppenwolf’s Magic Carpet Ride.   You down climb (as opposed to hike down) the previous high point of Connecticut to an unassuming flat section of trail that opens into a jaw droppingly beautiful and unexpected ravine.  The ravine has a powerful stream which has cut sculptured and manicured shapes into the rocks.  It has those physcodelic curves and flowing geometric feel like the songs of that era.  The natural colors match the vibe of the geometric geography.  Swimming holes and waterfalls abound.  The sun filtered light through the trees spectacularly change with the sun angle and the foliage compliments the beauty as you hike gradually downhill welcoming you to the state.  Absolutely one of the best entrances to a new state on the trail.  The competition has not been a slouch either.  WV to MD has the Shenandoah and Potomac river confluence with the iconic AT bridge; MD to PA has the beautiful PennMar Park; PA to NJ has the fabulous Delaware Water Gap; I’ll give you that NJ to NY is not as dramatic; nor is NY to CT; but then pow…CT to MA…….a magic carpet ride….as the song goes. 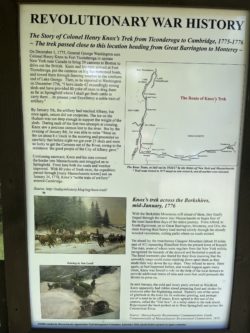 The Massachusetts Appalachian Trail and the Revolutionary War

The Appalachian Trail crosses some behind the scene locations of events that shaped the American democracy of which we all should be thankful and proud.  In 1775 George Washington took command of the Continental Army.  He needed a win to establish early credibility to the revolutionary efforts.  In the winter of early 1776 he sent Henry Knox across the Massachusetts wilderness to retrieve the recently captured cannons of Fort Ticonderoga and bring them to Dorchester Heights above Boston where Washington was mustered with the Continental Army.  The cannons were carried across the ice of the frozen Hudson River.  Then they were dragged on sleds across Massachusetts having intersected the area that would become where the Appalachian Trail now runs through southwestern part of the state.  The cannons were mounted on the Heights and Washington was able to dislodge the British hold on Boston with General Howe, the British commander, deciding to retreat to Halifax Nova Scotia as the prospect of continued bombardment of the British ships in Boston Harbor did not seem like the wise strategy to pursue.  The Continental Army’s “win” here gave the Continental Congress the confidence that the Colonies could actually take on the strongest fighting force in the world at the time.  That led to the development and signing of the Declaration of Independence.  Of course, the fight was just beginning and Howe returned the favor to Washington as the Continental Army barely escaped from New York later in the war. 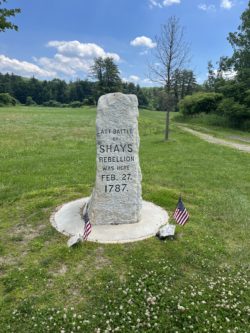 The Massachusetts Appalachian Trail and The Articles of Confederation

Also in this part of the state, just outside of Great Barrington, a stone monument is placed right on the Appalachian Trail as it passes by the field where the final battle of Shays Rebellion was fought.  After the Colonies won their independence from Britain, the first Colonial government was set up as a loose confederation of all the newly freed colonies, under the Articles of Confederation.  The Articles had many problems.  The colonies had significant war debt.  Soldiers were promised to be compensated for their service in the Continental Army.  Farmers had amassed significant personal debt throughout the war.  The more wealthy urban population who in general controlled the capital available at the time also controlled the court system.  Many soldiers were paid in worthless local currency or not paid at all.  Taxes were raised on the poorest citizens of the new nation.  Many farmers were brought before the courts and placed in debtors prisons.  Many farmers who were also Revolutionary War veterens were foreclosed upon.  Seeing this as an unfair and unjust treatment of the men who fought for the new nation, a rebellion ensued.  Daniel Shays was a revolutionary war veteran and farmer in southwest Massachusetts.  He became one of the leaders to rise up against the unfair tax and debt crisis that developed.  There were many other aspects of the Shays Rebellion force that were not as clean cut as the noble fight for fair policies, and many rowdies and hooligans joined the fight just to be against whoever was in power.  Shays Rebellion was crushed by local militias that were loyal to the various new colonial governments.  However, this action led to highlighting for the new nation the problems with the Articles of Confederation which were too weak to assume the Colonial war debt, and to coin a stable currency.  It also pointed out the lack of overarching fair legal policy application throughout the colonies.  The war and personal debt issue initiated the first meeting of five of the colonies to work to improve the existing Articles.  This evolved to then a second Constitutional Convention where 12 of the 13 colonies participated in the work that created what we now have as our Constitution. 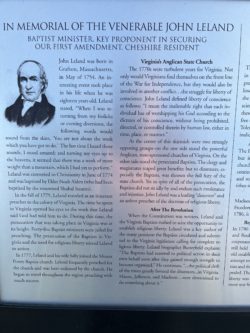 The Massachusetts Appalachian Trail and The Bill of Rights

Along the Appalachian Trail as you pass through the town of Cheshire, MA, there is a story board which describes John Leland, a native of the area and his influence on our Bill of Rights.  Cheshire is a great spot with a wonderful camping area and most importantly a Dunkin Donuts where you can fuel up on Boston Cremes to get you up the awesome Mt. Greylock climb.  It’s a two donut climb for sure.  John Leland was a Baptist minister.  He had moved from this area to Virginia.  As the Constitution was developing, many of the ideas being discussed were taken from the Virginia Declaration of Rights.  The most significant sticking point for the adoption of the Federal Constitution was the lack of the list of what would become known as our “Bill of Rights”.  Virginia being the most populous state at the time, had the distinction of being the tipping point for others to follow.  If Virginia did not support various proposals and policies, they probably were not going to make it into the final product.  At the time, Virginia had the state sponsored Anglican church.  The state had mandated compulsory tithes.  The state also had a significant Baptist population who favored freedom of religion and separation of church and state.  The Baptist preferred position for the proposals in the developing Federal Constitution was supported by James Madison.  The Anglican position was supported by many others.  John Leland did not think the Constitution as submitted to the states protected strongly enough the freedom of religion.  In a critical meeting, James Madison promised to immediately introduce and support the establishment of the freedom of religion, as we know it, to the developing new government.  This led to the other clauses in the Bill of Rights.  With that promise, John Leland swung his support behind Madison to have him elected as one of the members of the Virginia Federal Constitution Ratifying Delegation.  Virginia ratified the Constitution by a vote of 89 to 79.  James Madison, again with the support of the influencer of the time, John Leland, then won a seat representing Virginia in the new Congress.  Immediately, James Madison made good on his promise to Leland (and others) introducing the Bill of Rights in Congress.  Now many other pieces of this story led to the first twelve amendments of which the first ten are now known as the Bill of Rights.  Just as a note, the first 12 amendments were transmitted from Congress to the states for approval on September 25, 1789.  Amendment 1 and 2 did not pass at that time, so amendment 3 from that list is actually the 1st Amendment as we know it today which contains the “freedom of religion” clause.  Another detail is that of the first two others submitted to the states, one of them became the 27th amendment ratified in 1992, some 203 years after its submittal for approval to the states.  Without John Leland’s influence on the critical “freedom of religion” clause, maybe none of the other rights, and maybe even the Constitution itself would have come into existence protecting the freedoms we all enjoy today.  Democracy and our rights are very fragile, and have been for centuries.  Maybe reading a few more historical sign boards along the Appalachian Trail gives us all more an appreciation for how blessed we are to have our American system of government. 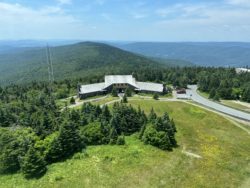