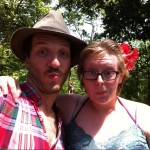 Mike here! Grace is all tuckered out from three plates of mac and cheese so I’ll be updating you on our first six days on the Appalachian Trail.

Grace’s dad drove us from Virginia to Georgia the night before. I woke up happy and excited. However, during breakfast I started to get butterflies in my stomach. Nerves were setting in hot and heavy. It was exactly identical to the feeling I get just before I go onstage for a play. I know my lines, I’ve rehearsed the blocking, but now it’s showtime. Anything could happen. We got to the Amicalola Visitor Center, signed the guest book, said goodbyes, and were off. 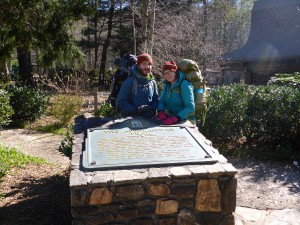 It was a worthy start for our journey, because the falls are gorgeous. That made it easier to tackle the 600 steps that bring you to the top. 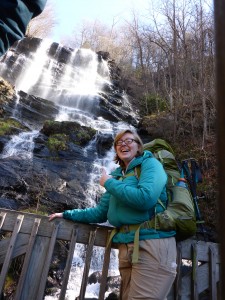 We may have gotten a bit overconfident then – with the stairs out of the way, we thought the had part of the day was done. Then we saw the sign letting us know we still had six hours to go until we reached our campsite for the night. It was a long first day for us, but we were joyful when we arrived at our first beautiful tent city.

Woke up at Black Gap shelter 7.3 miles from the Visitor Center, 1.5 from Springer. Grace decided she needed to sleep more so I made breakfast next to the campfire with everyone else. Our plan was to hike 9.6 miles to Hawk Mountain shelter but we decided that we needed to take it easy and hike 4.3 miles to Stover Creek instead. But first we had to actually start the AT at Springer. 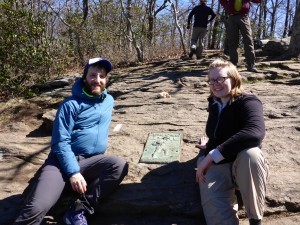 In hindsight it was fortunate that we stayed at Black Gap because it meant we had all the time we wanted at Springer. The view was gorgeous and the weather was perfect. The best part, however, was the friendly people who we met up there. A man by the name of Tater was logging people’s info and having them sign the “official” logbook, which was just a $1 spiral bound notebook. Still, pretty cool. A man who Grace and I are calling Red Beard handed out homemade jerky. There was Louis who invited everyone to take some selfies with him. I’m looking forward to those in my e-mail.

I am also looking forward to the picture that got me my trail name. There is a tree at the top of Springer which has a branch jutting out almost perfectly horizontal. Naturally, I needed a picture of me hanging from it upside down. It was supposed to be the last picture before we left. It was taken, I jumped down, and put my pack on. Then a gentleman traveling with Tater named Whip asked if I could do that again with him joining me. Of course I obliged. I’ll never turn down a request to climb trees. So we climbed, snapped a picture, and got down. Immediately he reminded himself that I didn’t have a trail name and called me Possum. 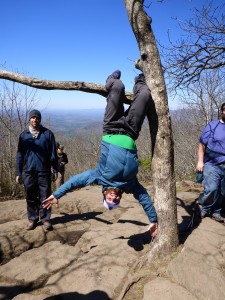 Everyone who watched the spectacle marveled at the simple brilliance, and there was no desire in me to refuse. Christened, happy, and full of good vibes, we started walking our first steps on the Appalachian Trail.

It was more of the same leafless trees, rocks, and occasional mud. But then we got to a section that I am calling the Zoo. Flora we had not seen before, with long smooth green leaves suddenly appeared all around us. It was like walking through the concrete pathways of Bronx Zoo and then out of nowhere you are in Wild Asia. That same feeling of being in some place wildly different. It was great. I enjoyed every step of that. We met Mountain Squid who provided our first bit of trial magic in the form of sugar water. Yum. He recorded our names for his log. 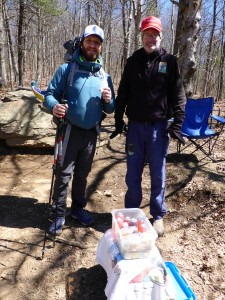 When we got to Stover Creek we met Terry who had driven to Springer all through the night. He was exhausted and stopping here. It was cold but thankfully he had started a fire. We were soon joined by The Camel. Then Whip, Tater, and Pops showed up, and they were delighted to see us. Then a group of young thru-hikers joined. They started from Amicalola this morning. They are beasts. They hate Superman. They are the Anti-Justice League. We are all staying here because we heard it will rain tomorrow morning. As we settled in to the shelter Grace pulled out her uke and started playing. Almost immediately, Pops called for Tater to come look at what was happening and what was about to happen, and tells Grace her trail name: Ukelady. It’s too clever not to love. Especially coming from Pops. Grace accepts it, even though she knew it was coming. First day on the Appalachian Trail and we both have trail names.

We had a fantastic time that night. Lots of people. At least 15. I made dinner for Grace and I over the fire. An event of some general interest. A double batch of ramen. It turned out great. I felt very proud for saving fuel.

I felt very confident all day. The hiking was tough, but doable. Especially at our slower pace. I’m really looking forward to meeting new people and familiar faces.

There was a thunderstorm last night. It started in full swing. Sleeping in the shelter was a smart idea. I woke up with the sun. I feel well-rested and ready for another easy day. As we left the shelter, Traveling Teacher gave Grace icy/hot sticky pads. 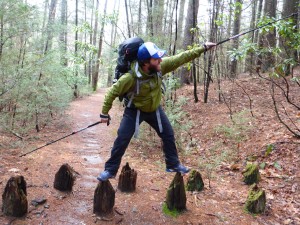 Today was about pain, healing, and triumph. It was tough for Grace as she didn’t feel confident that her pack was positioned correctly. Her shoulders hurt from the day before and nothing was helping. We got to a waterfall and it gave us a chance to reset. 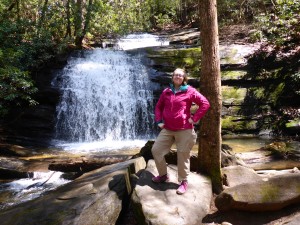 The waterfall was fun, and I fell trying to get to the falling water but only got one foot soaked. 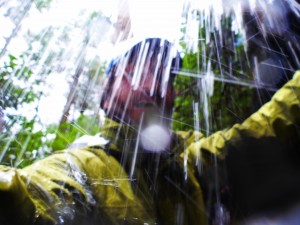 Further on in the trail we took a blue blaze to a cemetery and were greeted by a spinning playground structure. 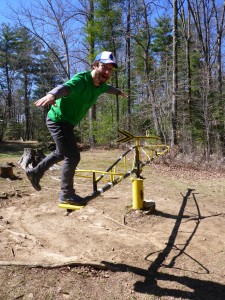 We made it to Hawk Mountain shelter but weren’t in a social mood. Tonight we are recovering. I rediscovered mac and cheese. Yum.

I started the day in a grumpy mood because I wasn’t getting ready as fast as I wanted to. As we hiked I found a large rock with a great view of the mountains surrounding us. As I stood on the rock, I let all of the negative feelings fall away, and I instantly felt great. All of my optimism returned and I was happy to be hiking. 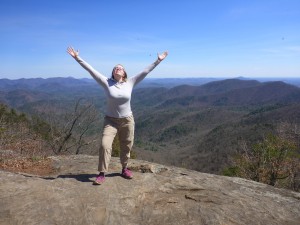 We climbed two mountains to get to Gooch Mountain shelter. There wasn’t supposed to be any water for a long time so we made sure to fill up before we left. But between the mountains someone left a giant Army water tank for the hikers. It was a great bit of trail magic.

We met a bunch of people along the way, some of whom remembered Grace from the waterfall as she played her ukulele. There was Gauge, who inexplicably took naps throughout his hike, but still managed to keep pace with us.

Gooch Mountain shelter was full of good people. There were a few who started at Springer that day, which is insane. Luis is from Germany and only here for six months on his visa. He brought a small guitar and was playing around the campfire all night. There was Davie who I accidentally named Pocket Hobbit, although he didn’t seem too keen on it. It was a fun group and good night. We were forced into our tents early by the rain. Grace and I watched an episode of Gravity Falls and are now falling asleep to the sounds of Luis playing covers from the shelter.

We walked the most miles today. I climbed a tree. We camped at Lance Creek. Fiddle guy played. Grace played a song from her new album for everyone. Goose told stories, one of which was improvised. Teddy Bear showed me campfire techniques and gave me some of his spice mix which he made. He also played a didgeridoo which he made, and gave Grace and I some mac and cheese because we said we were low on dinner supplies. One hiker told a whale joke that we have to pass on. We set an alarm for 7 am tomorrow to tackle Blood Mountain. It’s also supposed to rain all day. We will see.

My back hurt today. Maybe an icy/hot patch will help. It was a rough hike.

We left Lance Creek at 8:45 this morning because we saw how hard Blood Mountain was going to be. As it turned out, going up was not bad at all. We were almost shocked when we reached the shelter at the top. All that hype did us a favor. The shelter was stone instead of wood like all the others. 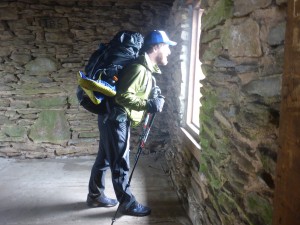 We had lunch with some of the other hiker including Nicole, Teddy Bear, and Gary and Mary. We then started what we thought would be an easy walk down. THAT was the hard part. That is what everyone should have warned us about. Ten times out ten I would rather be going uphill than down. This was no exception. The beginning was mostly giant flat angled rock surfaces which would have been tricky on a dry day. Unfortunately, it had been dripping rain the entire day so every rock had a good wet sheen and all the dirt had turned to mud. 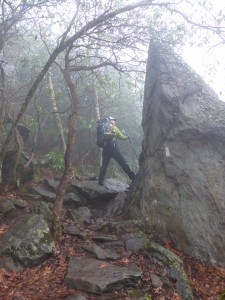 We took it slowly and there were a few close calls. All that slow careful stepping left me aching, tired, and frustrated. And then we walked some more. We had thought Neels Gap would be closer than it turned out to be. It felt like I was just going to be hiking forever. Finally we heard traffic and we were never so happy to do so. 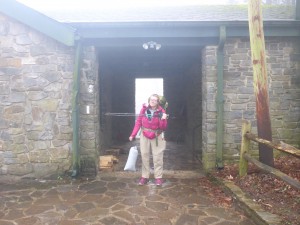 We had to resupply at Mountain Crossing, which sucked because most of the food was twice as expensive as a grocery store. The price of getting Pop Tarts in the woods. We saw Gary and Mary and they graciously gave us the rest of their sunscreen. And then just as we were saying our goodbyes, out of nowhere, they offered to send us a little care package along the way. It was insanely sweet. They wished they were coming with us. It’s hard to take all of this kindness when I have little to offer in return. One day I will be in a position to help. The trail magic so far has been wonderful.

Speaking of trail magic, just as we were setting up our tent, a fellow hiker told us that a church group was coming to serve up some free hot food. That hiker turned out to be Steph from Australia, another Appalachian Trials blogger! The food was mac and cheese, salad, strings beans, and iced tea. It was a another desperately needed good trail vibe. We met more hikers and are now camping with Teddy Bear, Steph, and others.