First things first. My shiny new shoes aren’t so shiny anymore. Wanna play a game? Bet you can’t guess how long they stayed clean for. On second thought, that’s not really a fun game so I’ll just go ahead and tell you. They were mud free for a whooping 30 minutes. Tragic, but that’s good going for my clumsy self.

Two days off has definitely got me well rested. Saying that, today hasn’t been easy by any means. We pulled a 20-miler with several mountains. Not huge mountains; they weren’t full on like the Whites, but it wasn’t easy. Perhaps going from an average of 12 miles a day to cracking out a 20 had something to do with it.

Our first summit had no views, nor a sign. The only way I could tell we had reached the peak ( which was completely surrounded by trees) was by checking Guthooks. We’re not in Kansas anymore, and by Kansas I mean the Whites.

The second summit was much nicer. We sat on rocks with the sun shining on our faces with views in every direction. Had a lovely little lunch that consisted of a string cheese and jam tortilla with cookies and cream ice cream for dessert. If you love meringues this ice cream is for you! 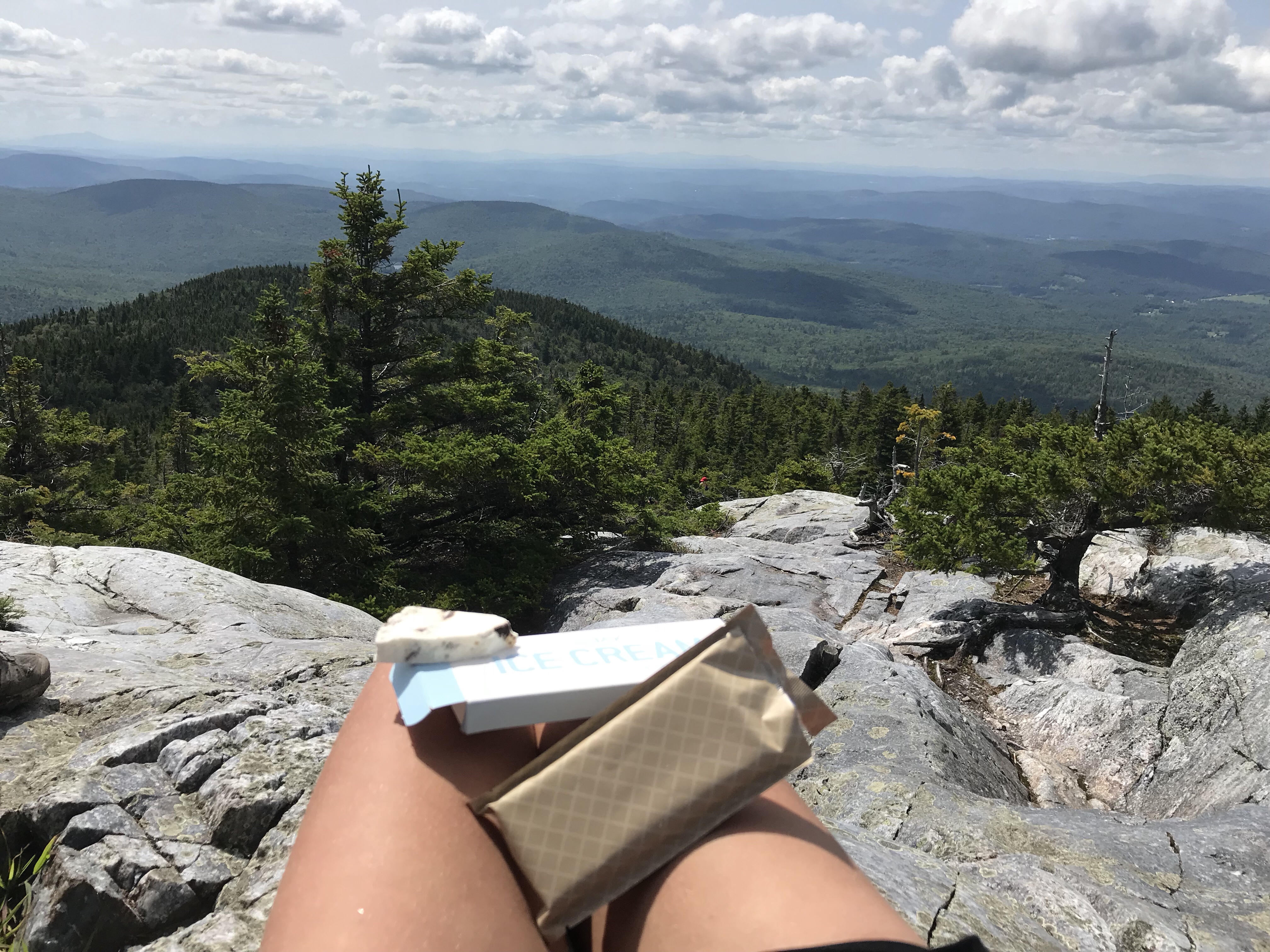 Our last mountain had a gradual ascent over 3.9 miles. Nice, right? Though I think I prefer steep climbs over a shorter distance to gradual climbs over a longer distance. I’m weird I know.

Oh, we had to deal with a lot of this climbing Smarts Mountain.

How would you navigate a mud pit? Would you walk the sunken planks like a pirate? Arrrr, matey. Or find another way around? I opted not to play pirate for the day. We had been warned by some NOBOs that the planks were not to be trusted if you didn’t want to end up knee deep in mud.

The shelter on top of the mountain is an old fire warden’s cabin. Check out how cute this is. 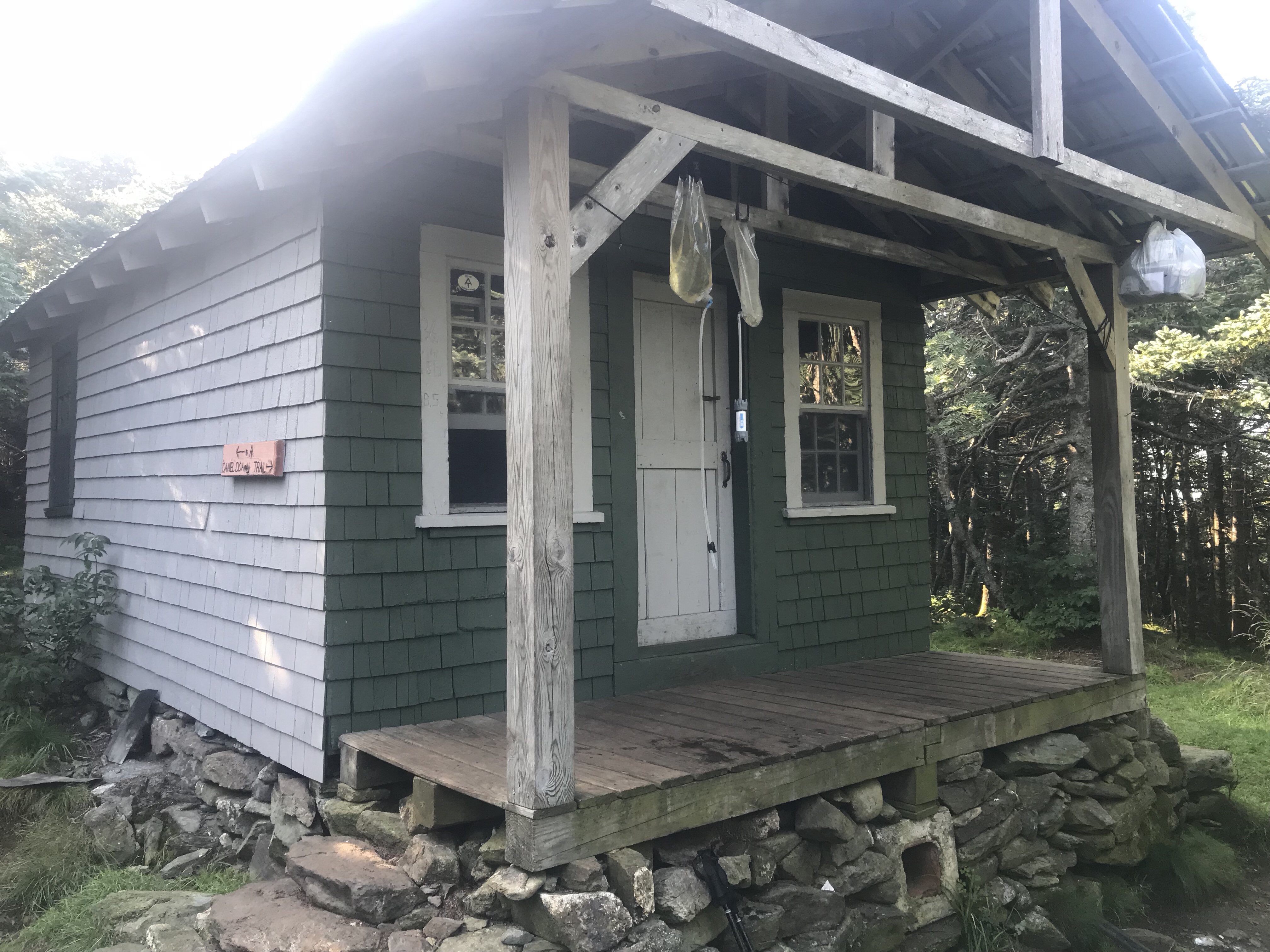 You can actually go up the fire tower, too. I became a member of the night watch tonight. Once I muscled up the strength to open the trap door.

I’m going to bed so you can’t have a long blog post. Sorry.

Oh what a beautiful morrrni… wait, actually I suppose the rain is someone’s idea of a beautiful morning – just not mine. All I was thinking about as I sat in my tent listening to raindrops was the eight miles into Hanover. Eight miles of suck and then I could buy hot food and a Coke. It must have been some incentive because I made it to the co-op by 9 a.m.

We’ve all done the walk of shame at some point or another, right? This was one of those moments, though I really didn’t have anything to be ashamed of. I mean my legs were covered in mud and I was dripping a little, but I’m not that smelly (it’s only been two days since a proper shower) so I don’t know why I was getting odd looks. It’s hiker resupply central. Admittedly it wasn’t any of the staff, they were super friendly. Must have been the mud. I dare the eye ballers to go walk eight miles in the rain through slush pits and not get dirty.

We hung out there for a good while charging our stuff, resupplying, refueling and drying off long enough for the rain to stop.

Lunch time was free pizza time. Yes, I said free pizza. Awesome, I know! Thru-hiking’s got to have its perks, too. If that wasn’t enough we headed to Lou’s for a free doughnut too. Hanover sure does know how to treat hikers. What a treat! 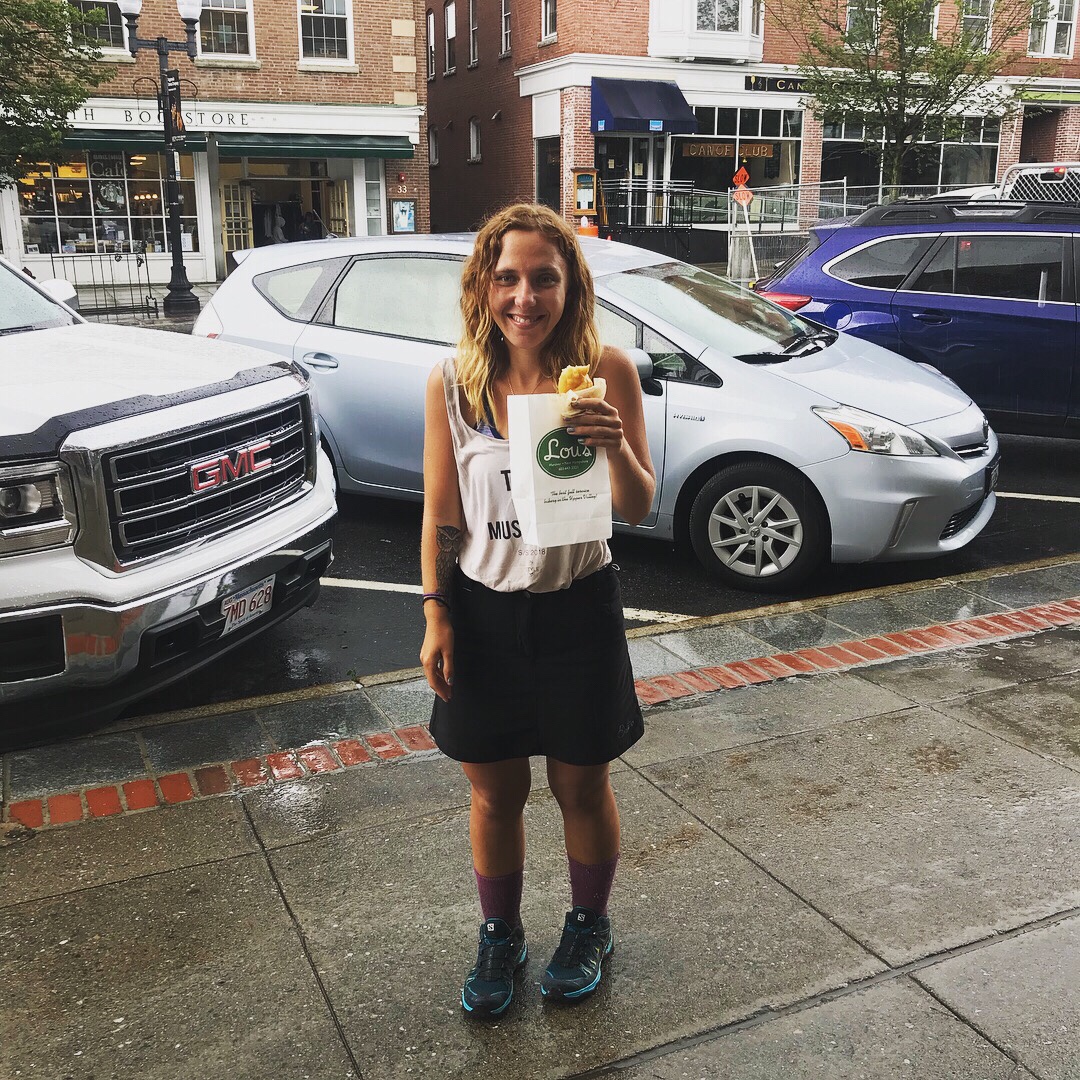 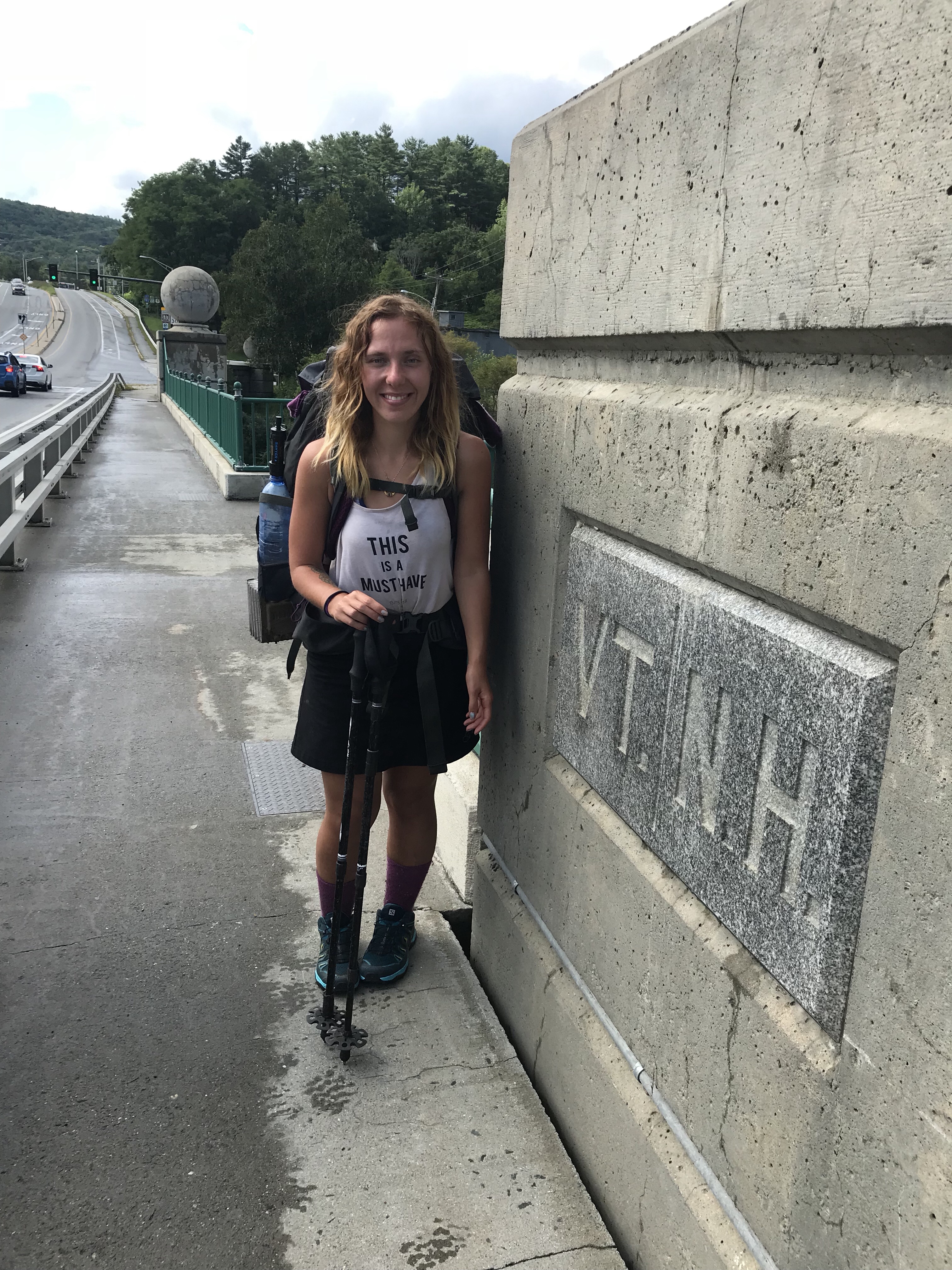 Another state down. Slowly taking back those colonies, Lizzy.

After five hours we decided it was time to move on. Six miles weren’t going to walk themselves. Less than a mile into the walk we crossed the New Hampshire-Vermont border.

It went from rain to being hella hot. Weather’s got its crazy hat on today. We went for a dip in a pond and sunbathed before making the homestretch to camp.

OK, anyone else find walking through towns completely bizarre after being surrounded by mountains and woods for the last six weeks? I found myself a little confused every now and again, I even had to check Guthooks for reassurance that I wasn’t leading myself astray.

My. oh my, Vermont is turning out to be a tough cookie. Since when have hills been worse than mountains? Maybe it’s just a complete change in terrain that’s getting to me, or maybe it’s the extra few miles a day. Who knows? Either way, I’m back on the struggle bus once more.

My salvation today was Linda’s trail magic. I didn’t need to eat the blueberry bagel or drink the orange soda after eating a Pop-Tart, but I did. It was glorious, I won’t lie, but hills and soda… I’ll never learn my lesson. Life’s too short not to enjoy the good stuff anyway. 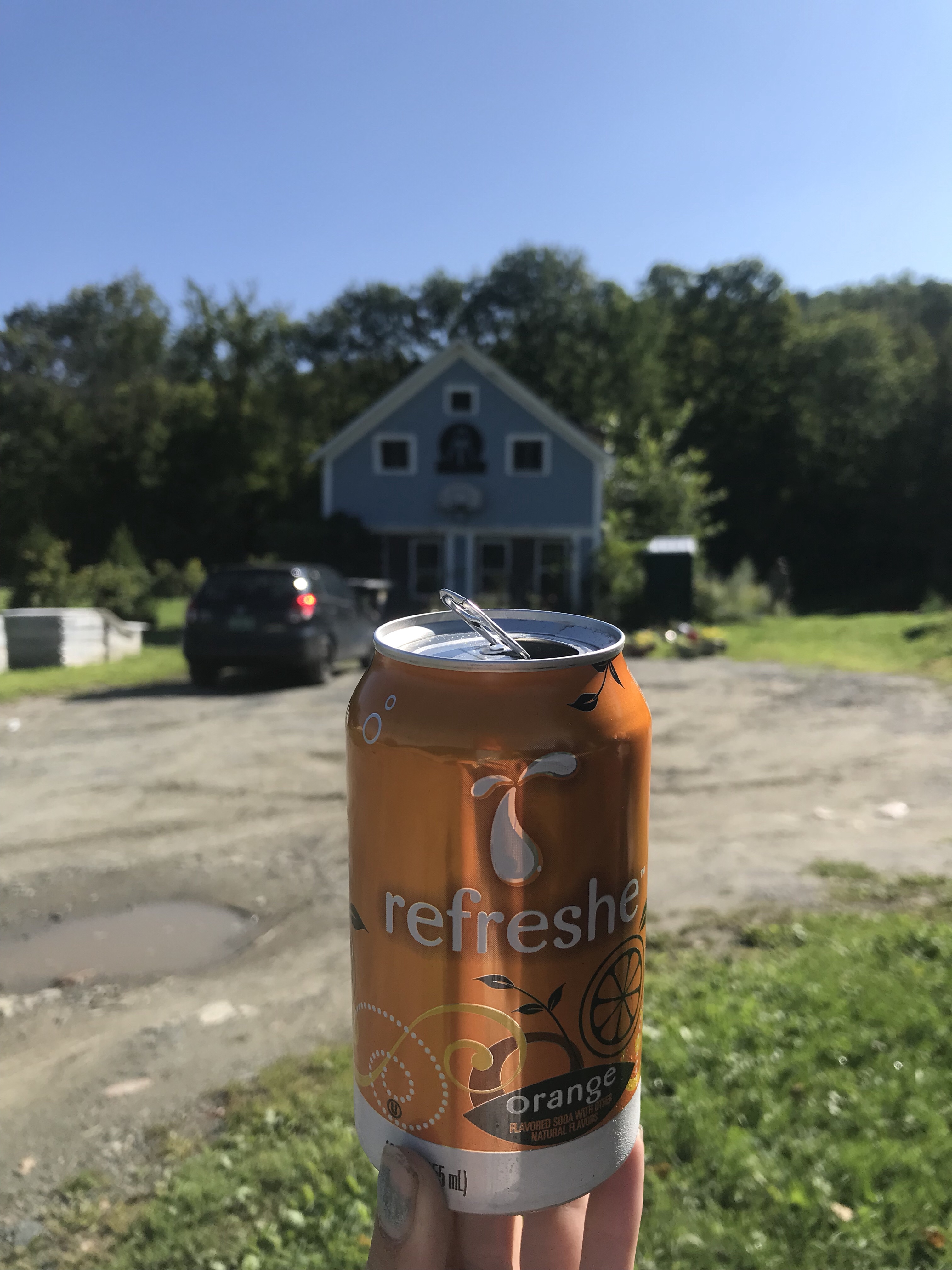 It didn’t end there. It wasn’t trail magic, but it may as well have been. We stopped in a farm shop for a glass of milk and jerky before moving on to Loon and Firefly’s back porch goodie sale. I, of course, had a Coke and an ice pole (freeze pop for you Americans).

Shoes on, headphones in, and 21.6 miles later I found myself at camp. Ever had one of those loner moods where you want to be completely alone? Over here. You can’t see me but I’m raising my hand. I like hiking with the guys, don’t get me wrong. They’re great company, but I guess I was just having one of those days and needed to be alone. It was super peaceful and I had an entire day to think about, well nothing actually. It was just the trail and me.

Hiked six miles to the Lookout for breakfast. Usual suspect; maybe I’ll mix up my diet  in the near future. Anyway, Vermont is full of super cute cabins and shelters. How cute is this? 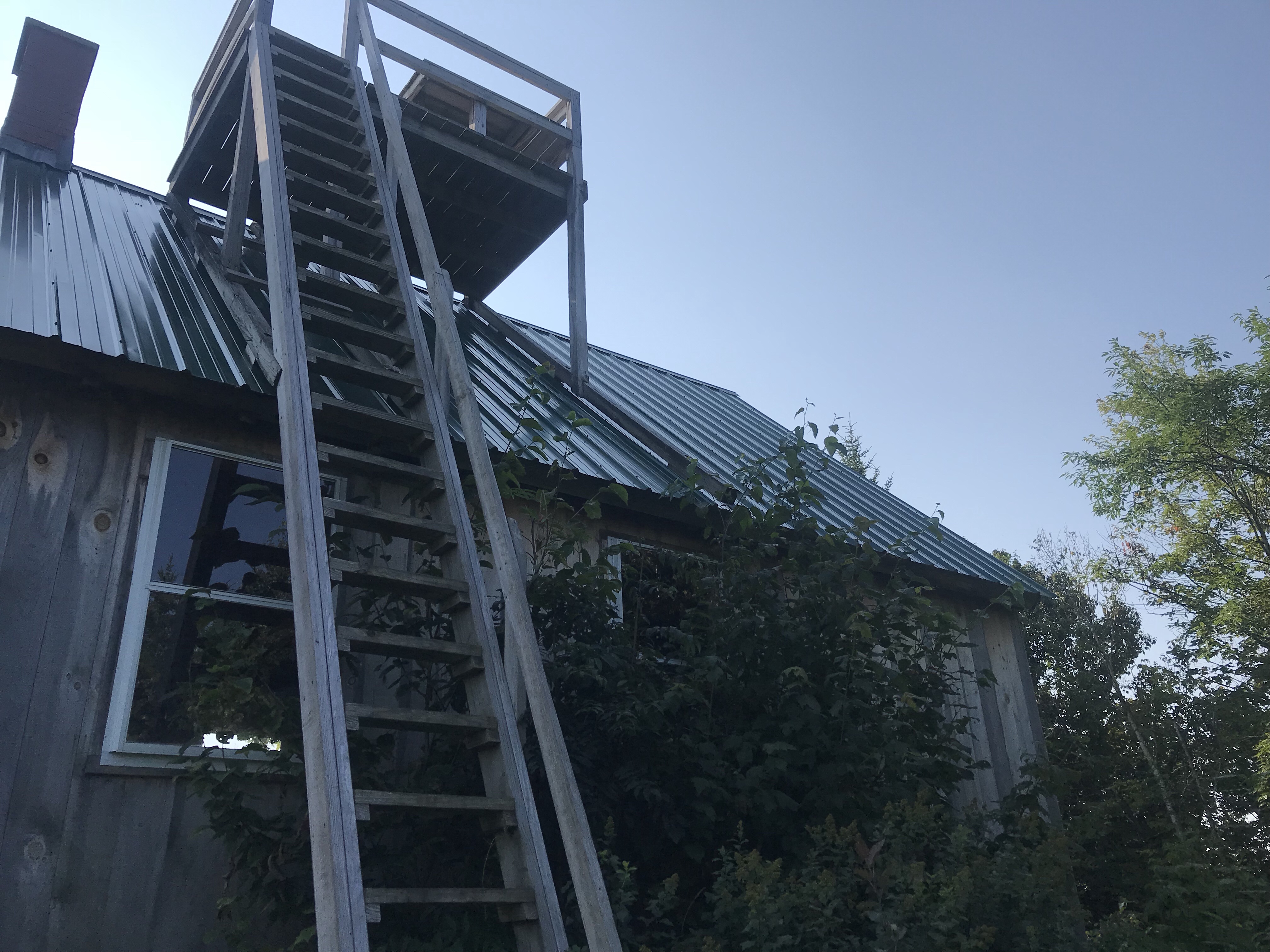 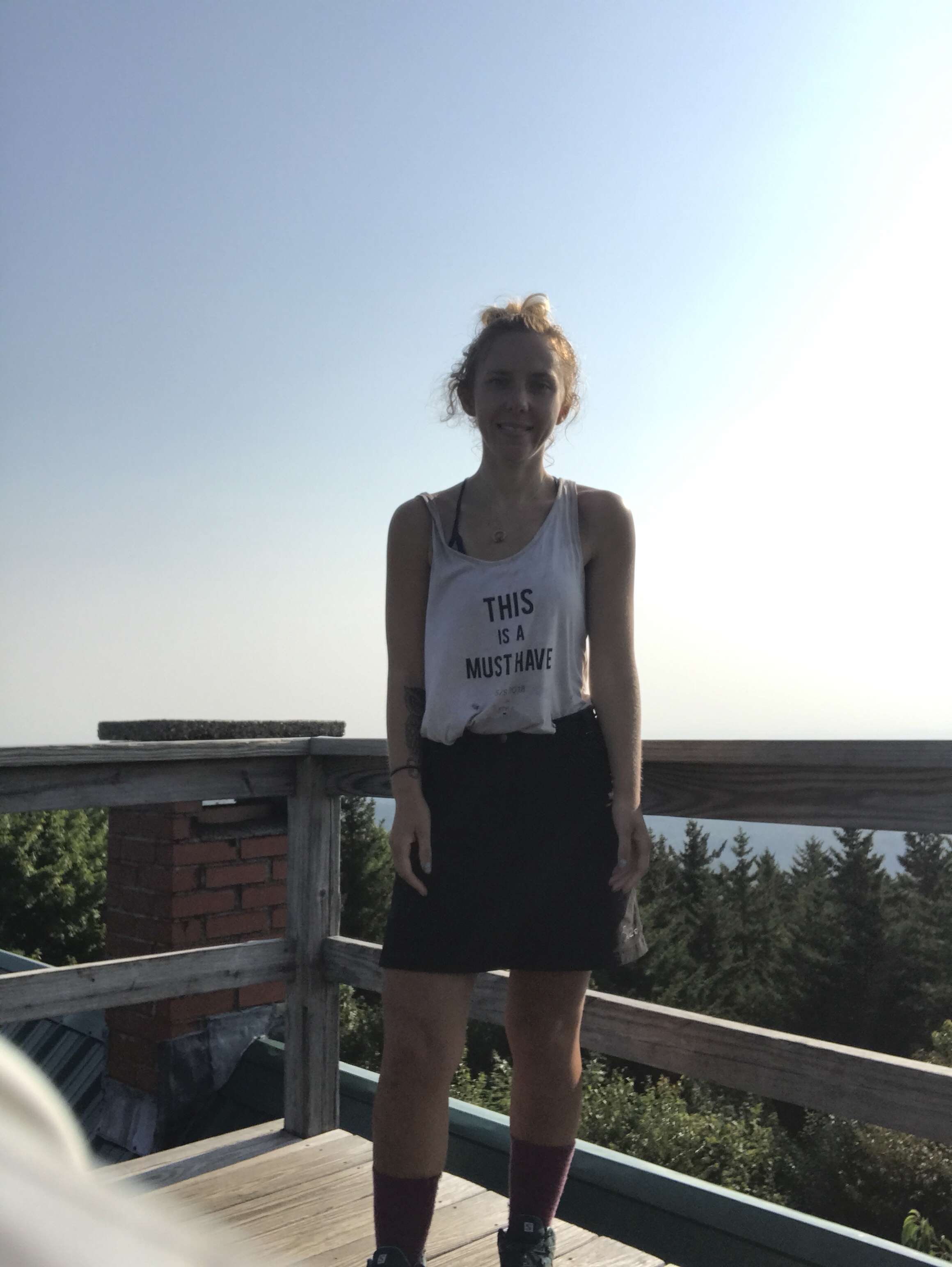 I must have sat up there for just over half an hour before moving on. Doesn’t sound like a long time, I know, but I had miles to make and I’d already gotten morning smiles.

Still can’t get over how different the terrain is from Maine. Still finding hills exhausting but one step at a time gets the job done. Fizzy Worms and electrolytes help too!

I’m just going to go ahead and show you a few pictures of the terrain because it’s hard to sentence after a long day and my words will probably fail me. 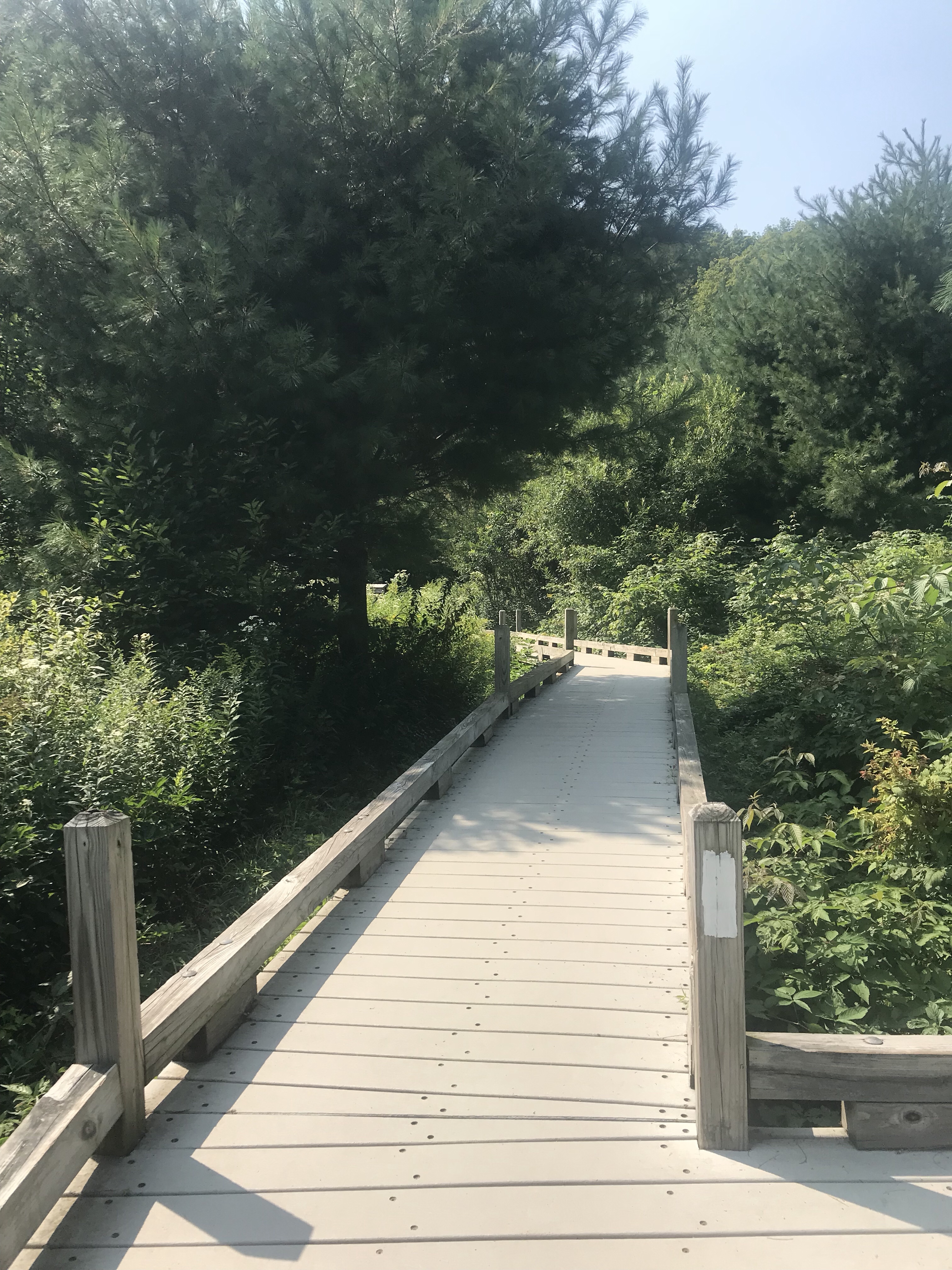 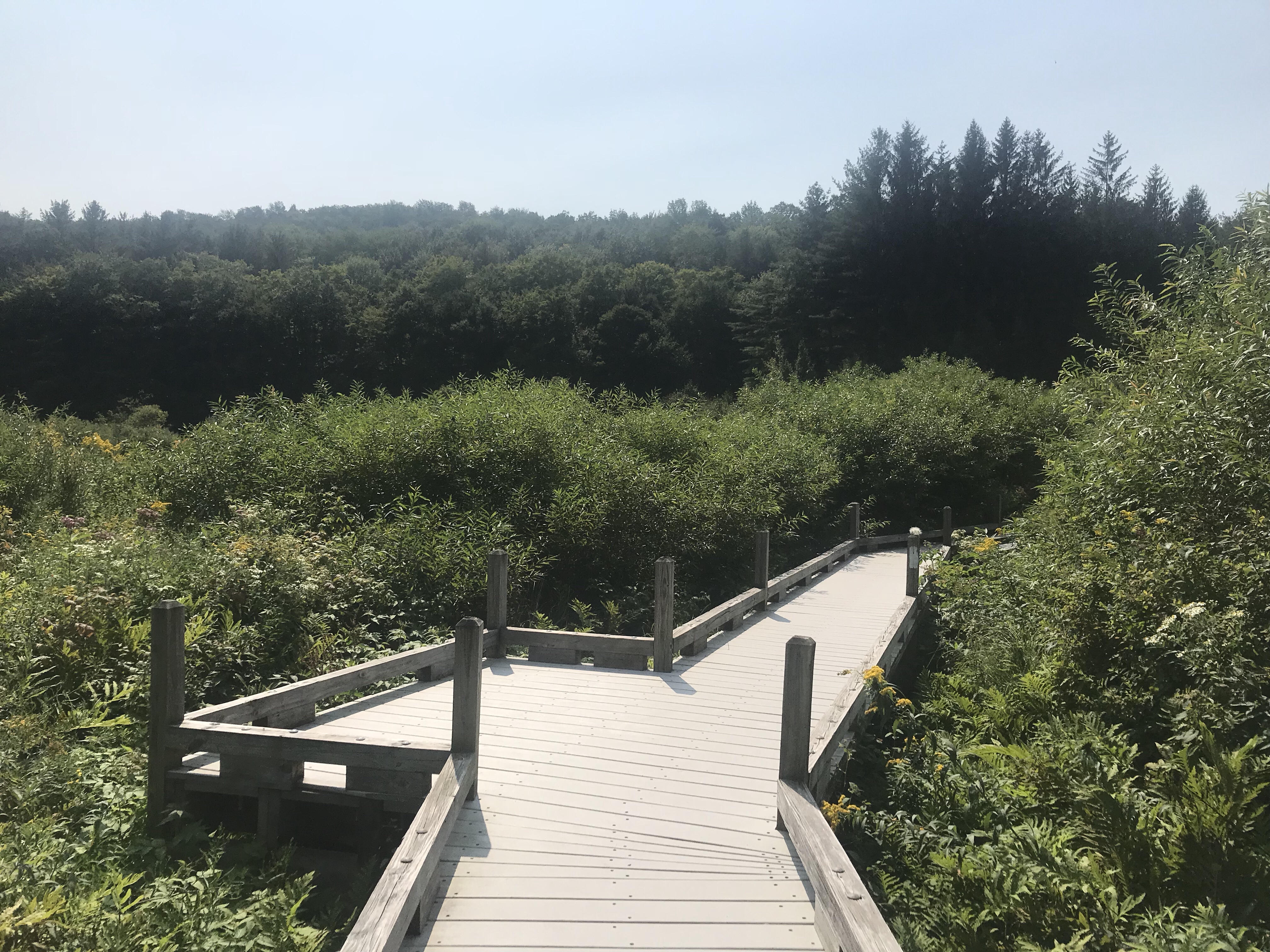 Rocked up to camp at 3:30 and tucked in to a Snickers ice cream and ice cold Coke. Afternoon smiles? Check! 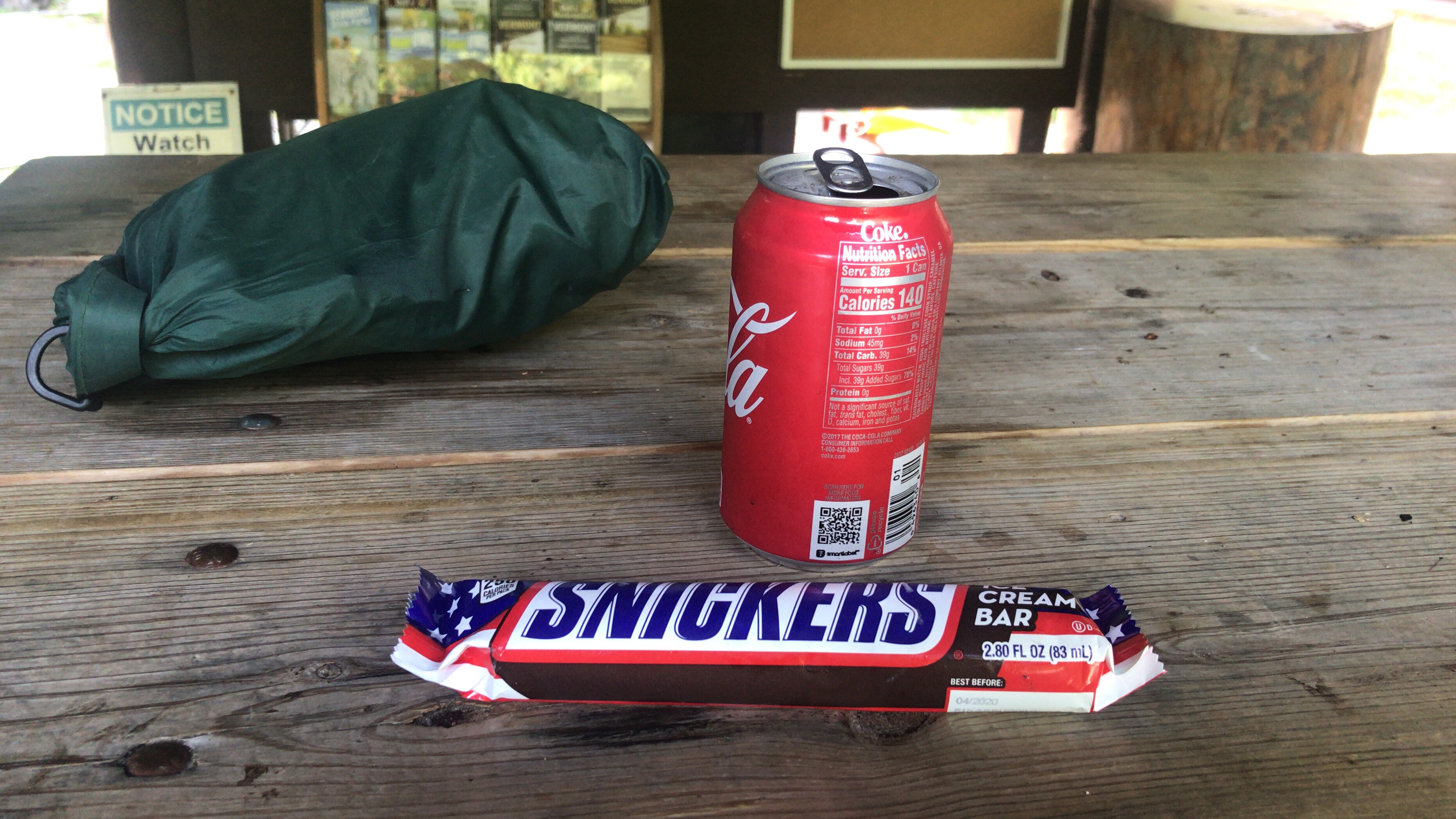 Got a shower, too. It was one of those coi- operated ones that hold a hundred spiders who have taken up refuge from the cold. I felt bad, but I wasn’t going to usher them out before I turned the tap on. Is that mean? The only bad thing about being and smelling clean was putting smelly hiker clothes back on. My camp clothes don’t smell quite as bad as my hiking attire, but let’s be real, it still sucked.

I don’t know what you’re doing but I have to go see a man about a dog. That’s a lie, I have to sleep. Miles and smiles has turned to miles and yawns. Until tomorrow.

How was your morning?

I sat down to eat breakfast with a view and ended up playing peekaboo with a snake. 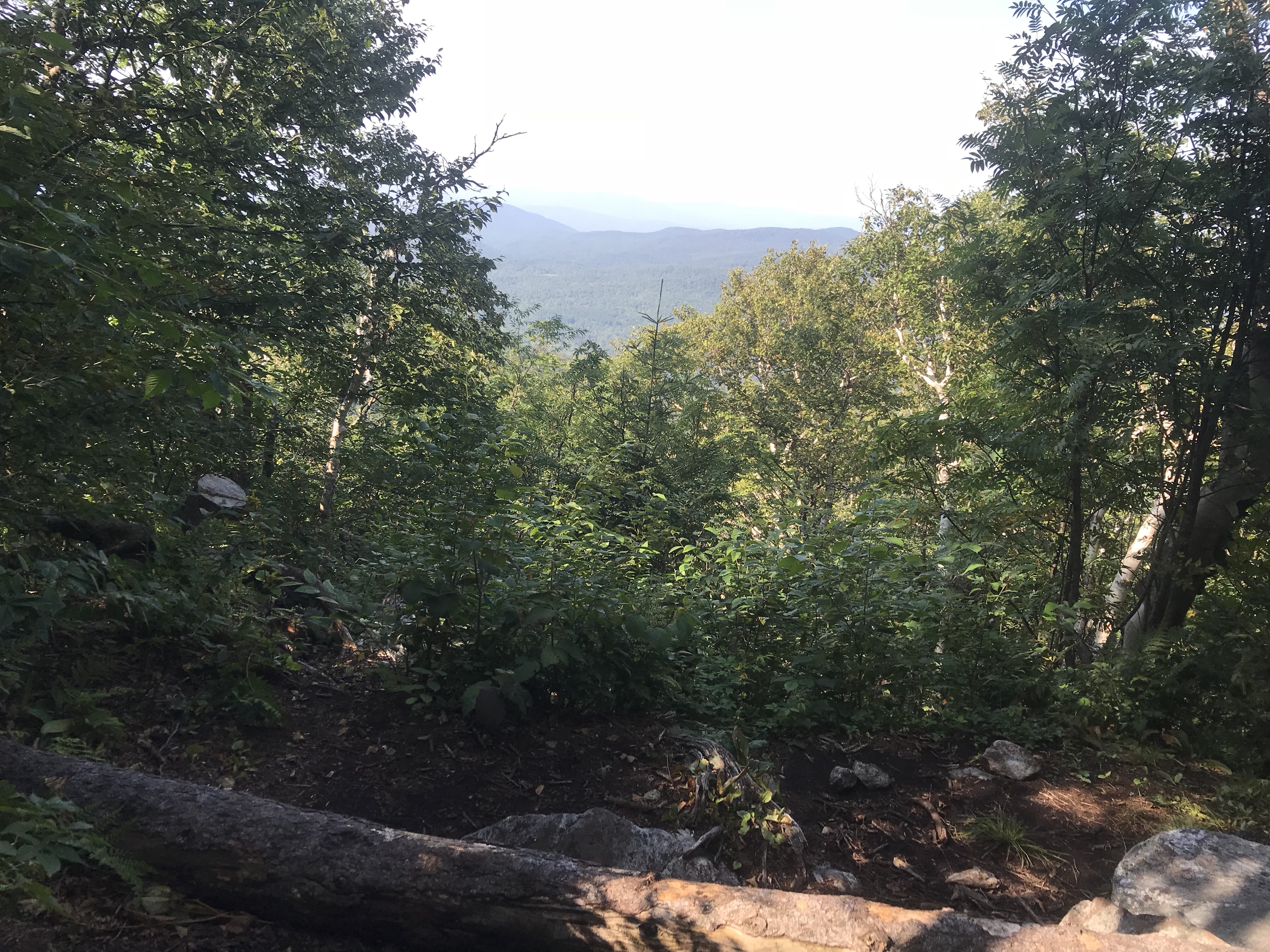 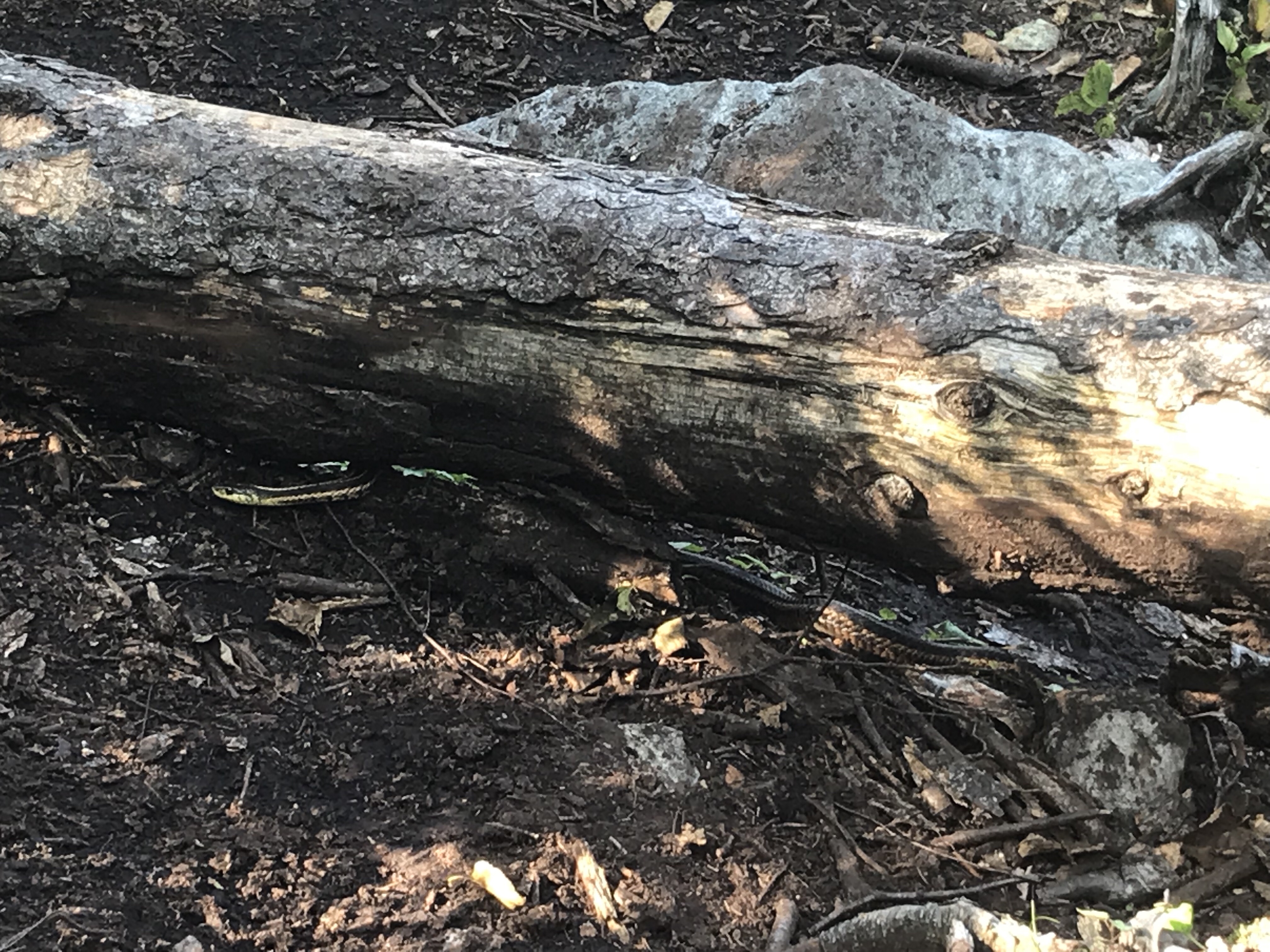 You stick your head out and hiss, you bring your head in and hiss, in, out, in, out, hissing all the time. You do the ultimate stare down and wait for all the screaming, that’s what it’s all about.

I didn’t run away screaming, don’t worry. I stood my ground and gave him snake eyes back. The whole show down went on for a while. It must have been like watching two cowboys in the movies. Who was going to draw first? You can go ahead and refer to me as the snake master from here on out! In all seriousness, I’m glad I chose not to sit on the log because this scenario could have ended up with a bitten bottom. Need to be more vigilant when plonking myself down. In my defense, I was on the lookout for porcupines. There are signs everywhere warning of overpopulation. No mention of snakes.

Lunchtime hit and I’d made it to the shelter at the top of the mountain. Wel,l almost the top. Killington peak was a blue-blazed .2 trail. I debated whether to go up to the peak as I technically don’t have to, but the sun was shining in all its glory. How could I not? OK, OK, yes, there was a restaurant that served Coke – that didn’t factor into my decision, though. 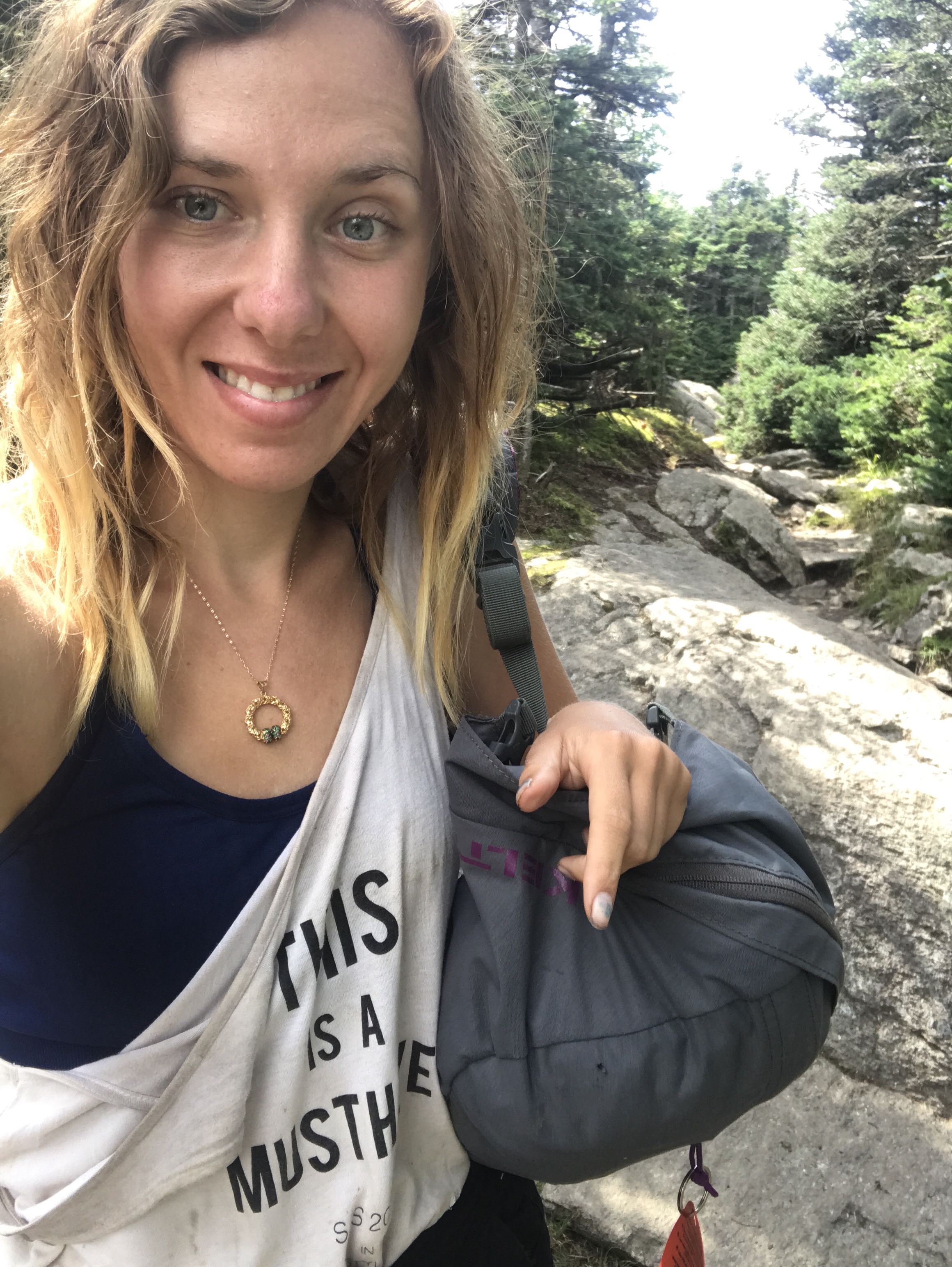 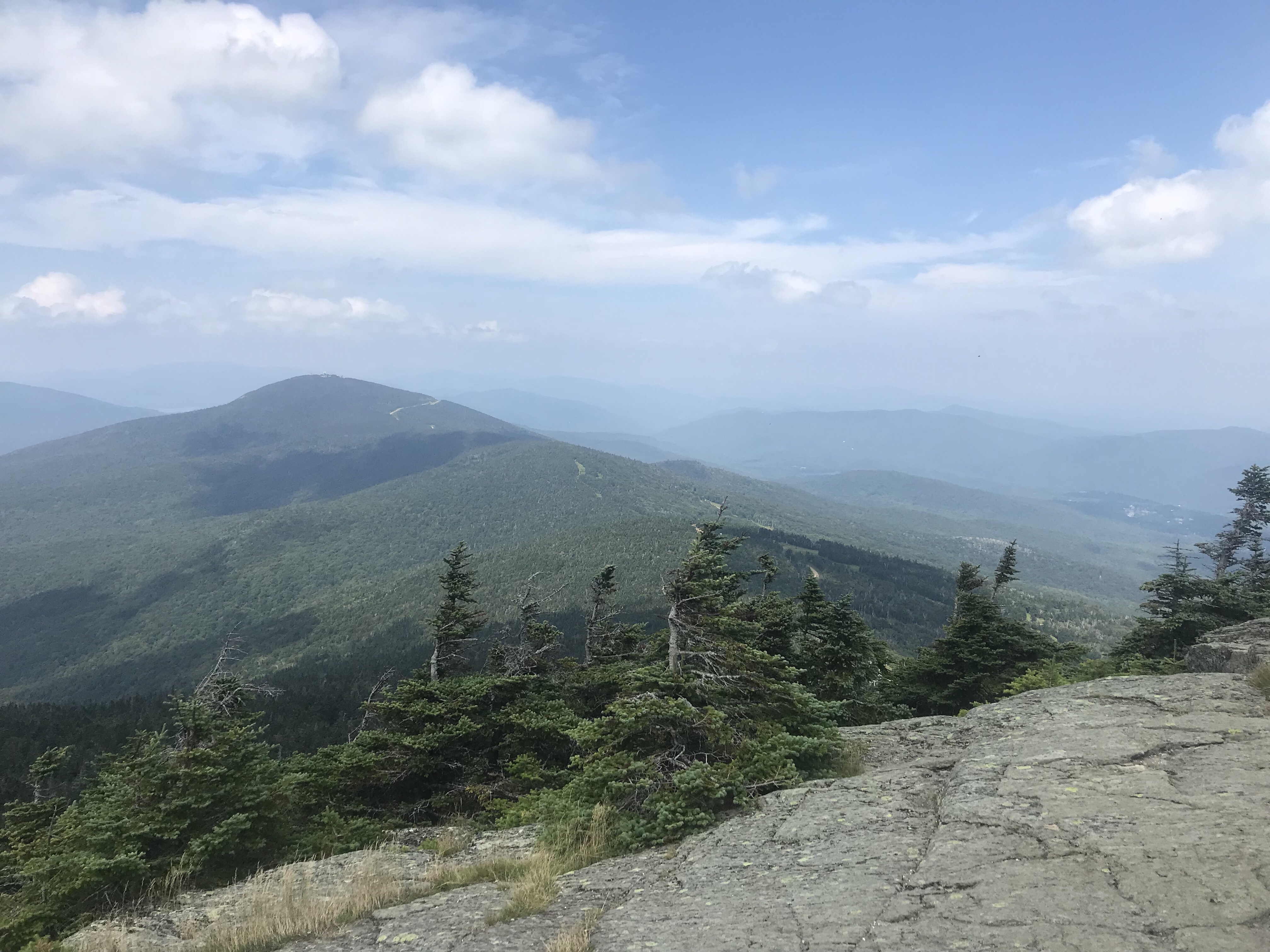 Chips (fries for you American folk), views and a Coke. Can it get any better? I didn’t think so. Must have been on the peak for a little over an hour before I decided it was time to move. 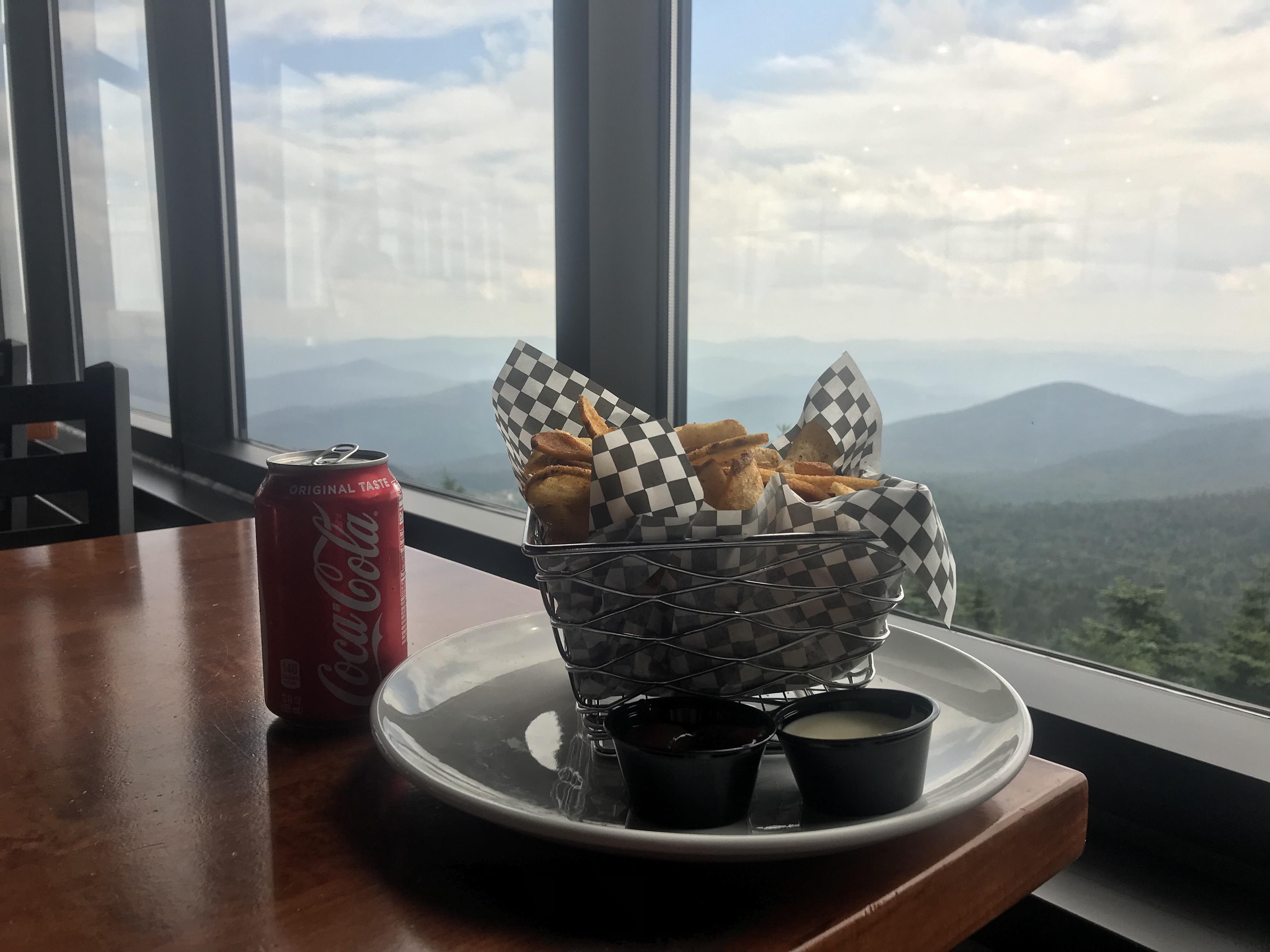 Wasn’t in the mood to hike much after the chip baby I’d acquired so I waited for the guys to show up. We agreed on six miles to end the day, but I couldn’t resist stopping by the water four miles in. The heart wants what the heat wants. 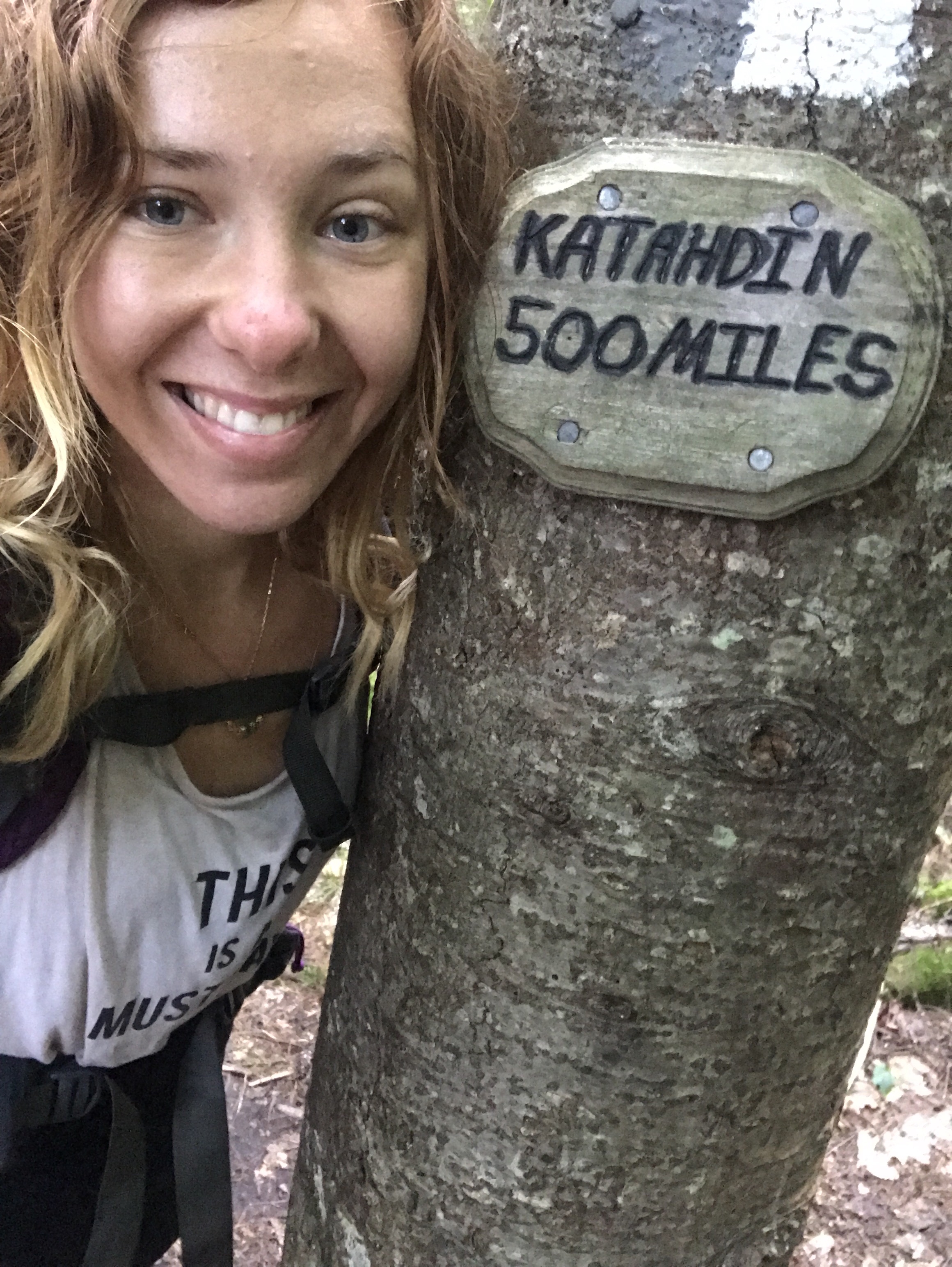 That’s right, you’re looking at a 500-mile marker. One hundred more – only gone and done it again haven’t I! Nowhere near halfway yet but this is some serious progress if I say so myself.

After a mini celebration and selfies we headed into Rutland for a quick resupply. Five hours later we were back on trail. Did I say quick? I don’t really know how we managed that one. Yes, I do – Subway, Walmart, and a grocery store. What can I say?

Just ate the other half of my Subway and now I’m ready for bed. Sweet dreams!