I’ve made it to Harper’s Ferry and I’m looking forward to my first planned break.  Tomorrow morning I get on a train to go home.  Going to see my wife, my dogs, and my grandson!  I’m also going to trade out some of my gear.  I’m definitely dropping my rain gear for a poncho.  My vacuum sealed rations were to large.  I’m redoing them all!  Spring is here and summer is coming.  I’m switching  to my 35 degree bag and dropping some of the colder weather gear.  I’ve walked well over 400 miles!    This is already the longest backpacking trip I’ve ever taken and I have more than 75% of it ahead of me.  The Health tab on my phone says that I’ve averaged 31,467 steps, 11.43 miles and 117 flights of stairs a day for the last month in spite of 3 zero days.

I’m increasingly confident that I’m going to finish this thru hike.  I’m comfortable with the routine.  At times it feels as though my feet have wings and I fly down the trail.  But when I hit the lumpy bits or long uphill slogs, I lose my rhythm and struggle.  But it isn’t really supposed to be easy, is it?  I’m learning to just lean into the discomfort, slip into low gear and get to the other side of it.  Most of our supposed limits are no more real than Santa Claus. We are always more than we think we are. The real me lies somewhere between what I can and cannot do.  Nietzsche was wrong.   It shouldn’t be” That which doesn’t kill us makes us stronger.”, but rather “That which doesn’t kill us, tells us how strong we really are.”  I just have to spend sometime exploring the edges.  Ignoring the difficulty doesn’t really make it go away.  It must be closely examined…even embraced to be understood. 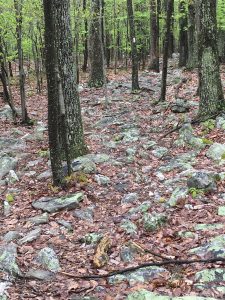 After my zero in Waynesboro, my cousin Chuck picked me up, took  me to breakfast and ferried me to Swift Run Gap to get around the fire.  I had resupplied in Waynesboro, but realized pretty quickly that I should have just bounced my food bag to Front Royal.  The first day out I picked up a couple of sandwiches at the Lewis Mountain Campground before stopping at the Bearfence Hut where I caught up to Otis. Popeye and Olive Oil were there too.  The place was crawling with thru hikers!  A couple of day hikers even walked to Bearfence Hut to study us in our natural habitat. The next day after a huge lunch at the Big Meadows Wayside, I checked into Skyland and scored a very good steak dinner and their breakfast buffet the next morning.  Hiker hunger is real! 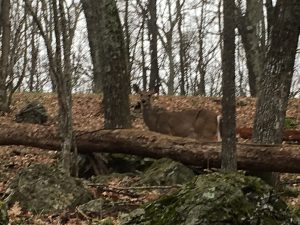 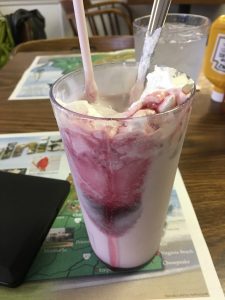 After leaving Skyland I stopped at the Pinnacle Picnic grounds for lunch.  There was a large group of Asian tourists exploring this incredible park by walking its trails. They had a buffet set up in one of the pavilions.  I tried to look hungry, but my yogiing skills were found inadequate to the task.  Nothing!  I went onto Pass Mountain Hut and actually had to eat something from my food bag.  I hit The Elkwallow Wayside the next day and enjoyed another huge lunch and even scored a footlong sandwich for the Gravel Springs Hut.  I’m telling you all this about food in the Shenandoah National Park so you don’t make the mistake I made of going through this park with a full food bag!  Two days max! 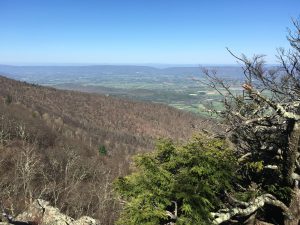 The view toward Luray heading towards Skyland

Popeye and Olive Oil, Forester and Backbone all walked this section with me.  I’m worried about Otis. I last saw him drinking a beer outside of the Big Meadows Wayside.  He seemed discouraged.  He is the only hiker I’ve seen every week of my journey.  I wish him well. 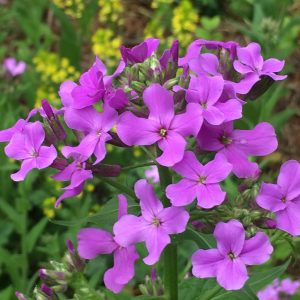 Dame’s Rocket according to one of my followers on Instagram

I went into Front Royal to fill in some gaps in the supplies I needed to get me to Harper’s Ferry.  I got to see the first episode of Game of Thrones!  I hung around Front Royal until noon the next day as I planned to stay at the Jim & Molly Denton Shelter  that night just five miles from the trailhead.  This shelter featuring a solar shower and horse shoe pit is not to be missed!  That’s Backbone hamming it up on the spacious deck.

The next morning it was foggy and rainy.  I fully intended to hike 18 miles to The Rod Hallow Shelter, but the rain talked me into stopping at Dick’s Dome.  This is the smallest shelter I’ve ever seen.  It will soon be replaced by the Whiskey Hollow Shelter currently under construction.  Of course it was packed by sundown and a mouse Disneyland by night. 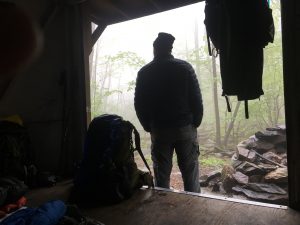 An eerie fog made the next few days interesting.  Rain threatened, but only occasionally delivered its promised misery.  It was cold enough to be uncomfortable…Cold enough to make it hard to tie my shoes, button my pants or buckle my pack straps.  In spite of the weather, scores of day hikers hit the trail with the weekend.  I passed several large groups of scouts training for Philmont and told them that that place put me on the path to this adventure.  I wanted to tell them that they probably shouldn’t take everything on the suggested list.  Some  of their packs were huge.  One of the scoutmasters looked as if he was packing over 60 pounds.  If they don’t use something on any of their practice hikes, they probably don’t need it.

It felt very good to get to Harper’s Ferry.  A derailment made my journey home more of an adventure than I expected; the train to DC was cancelled.  The associated drama made me put off my picture at the ATC headquarters until I come back to Harper’s Ferry.  While trying to figure out how to get to DC to make my connection home, I heard from Katina, another Appalachian Trials blogger.  She was with Giggles who I had mentioned in my last update.  They were at the Pine Grove Furnace State Park and seemed to think that the Half Gallon Challenge was optional.  What’s up with that?  I guess it takes all kinds of folks to keep things interesting.