(Mis)Adventures in the Midatlantic

After I left the DWG, I was on my own. Peregrine was behind me, and River and Hybrid were ahead of me. I also didn’t see a whole lot of other people, which was actually really nice. No people, no phone, no problems. It was tranquil and relaxing, and I’ve learned quite a bit about being ok with exactly where I am. My mind doesn’t need distractions like my phone when it has the woods around me to contemplate. I don’t need to be nosing into everyone else’s daily lives on social media when I have my own life to live right here in front of me. 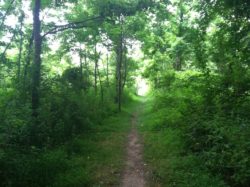 New Jersey is actually a halfway decent state. It gets a bad rap because of the Jersey Shore and all that jazz. I can’t speak for the rest of the state, but the section that the AT goes through is lovely. Although, the PA rocks don’t just end at the border. You’ve still got to deal with those for a spell in Jersey.

Trail magic is such a wonderful concept. Someone thinks, “Hey, I want to do something good for these people,” and then they come out and make it happen. Like the hikers they assist, trail angels are also expected to follow LNT, and most do. Unfortunately, there are some people that don’t really get it. 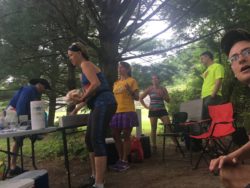 A great example of trail magic and trail angels

One example occurred in some random spot on the trail in New Jersey. There was a pile of things left on a rock. Clothing, short lengths of rope, a plastic bag of army men, etc. Just junk basically. It was all drenched since it had recently rained, and as a result was incredibly heavy. There was a little sticky note on it that said, “If you can use it please take it!”

*this next section contains an absurd amount of sass, proceed with caution.*

Excuse me, but no. The woods are not your personal charity drop box. This is not trail magic, we already carry all of the clothing we need, thank you very much. You are not helping anyone. Would you go into someone else’s home and blatantly leave things lying around that they *might* want? I don’t know why these people think it’s acceptable to leave their junk on some random rock. The woods are a beautiful and sacred place that we should cherish and respect. If you would like to get rid of some of your extra stuff, there are several Goodwill stores in the area. Things like this just scream ignorance about LNT and backpacking culture.

Thankfully, not everyone thinks this is appropriate. As thru hikers passed by, they would carry out a piece of the pile. Slowly the impromptu hiker box shrank. I didn’t stick around long enough to see it disappear, but I hope that, thanks to the efforts of some responsible hikers, it is now gone.

In Unionville, I picked up a package that contained my new phone. I was ecstatic. Finally I could take pictures again! However, when I tried to activate the phone it wouldn’t work. There was an issue with the carrier and the SIM card that could not possibly be reconciled for some time.

To top it off, the very next day my headphones fell apart and my watch battery died. No phone, no camera, no iPod, and now I’m using the sun to tell time. My life has become a comedy of electronics errors. 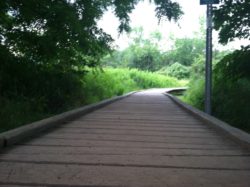 what hikers mean when they talk about the Jersey boardwalk

The unlikely hero in this story was a drive by trail angel named Potato Guy. As I sat by the road eating my lunch one day, he drove up and asked me if I needed anything. I told him the cell phone saga. Low and behold he just happened to have an old phone he wasn’t using anymore, and he just straight up gave it to me. This was quite possibly the best instance of trail magic I have received. If anyone gets the chance to meet Potato Guy along the way, please pass along my unending gratitude.

I was thrilled. I couldn’t activate it to receive any kind of communication, but I could take pictures and tell the time! That is, until the sky opened up and it started pouring. When I say pouring, I mean like when you stand under the giant bucket at a water park that just got full enough to tip over and plaster you to the floor with good ol’ H2O. I couldn’t actually use the phone that day because it would have just broken like its predecessor, but as we all know, the rain ends eventually. 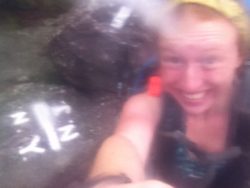 Waterproofing means compromising the quality of your pictures

At this point, Inasias had caught up to me. These vagabond shoes (boots?) were longing to stray into the very heart of it, New York, New York (Ok I’m done, no more show tunes I promise). If you hadn’t already guessed, we went to the Big City. Through a long and convoluted series of bus rides, I finally got a phone that worked. Buses, by the way, are the most terrifying form of transportation I think I have ever taken. Maybe it was the strange loud noises, or suddenly being launched into the air each time we hit a bump in the road, or the fearless speed with which the driver conducted his vessel along the pavement pathway, but busses now petrify me. It was, however, worth it for a zero and a phone. 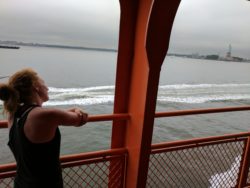 We took a bus to a train to a ferry to a car. This is the Ferry part

As for zeroing, Inasias has a friend in the city that put us up, did our laundry, and let us shower. I discovered that sleeping in a real bed has become a challenge. Upon waking up, I found myself lying the wrong direction with my head and arms draped over the edges and my feet on the pillows. Alrighty then, I have forgotten how to bed. 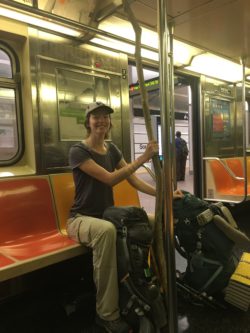 Back to the Good Stuff

Hiking. Right. The real reason I’m out here. Believe it or not, this isn’t “Spitfire’s Tour of East Coast Cities.” Shocking, I know. 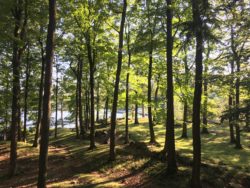 Not a city! Huzzah!

New York has some really fun trails! Going into it, I had heard it would be mostly PUDs, but these are entertaining PUDs! There was a new rock scramble around every corner. Are we going up? Down? You never know! I loved it. It kept my mind occupied with problem solving instead of the tedium that accompanied sections like the C&O Towpath. 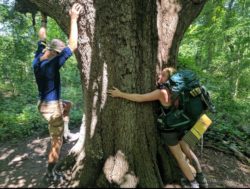 Inasias also was really good at keeping the two of us entertained. There are games like Perfect 10, the Question Game, and of course Song Association Football. In addition to that, we’ve started telling each other the plot lines of things we’ve read or watched. I spoiled Game of Thrones for her, and she ruined Sherlock for me. It was great.

Bear Mountain was a lovely climb. The trails up there are very well maintained. It’s definitely a tourist trap though. Road access to the summit and the zoo at the bottom make it a popular spot. The amount of people, particularly at the zoo, was just a smidge overwhelming. Great hike, but I recommend avoiding it on the weekend. 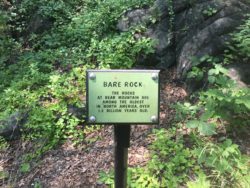 Yes there are rocks. They have been here longer than me and will be here long after I am gone.

One great spot untroubled by the masses is Nuclear Lake. The lake was used to cool a nuclear fuel processing facility in the past, but they leave it alone now. The clean, cool water makes for a wonderful swimming hole, especially with all the hot weather we’d been getting lately. We gladly jumped right in. This was a great way to leave New York. The next day we’d be heading into Connecticut, and the greatest country within a country, New England. 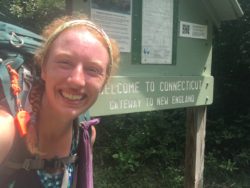 That’s not a sunburn that’s what happens to gingers when they sweat.

As always, you can follow me on instagram at erica.runs or shoot me an email at [email protected]!