Well, we finally got here Thursday night. At about 6:30, after crossing the outlet to Spectacle Pond, we staggered into the trailhead parking lot on Maine Route 15 above Monson. Fifteen minutes later we were picked up and drinking beer on our way to Lakeshore House. More on that later.

As should have been expected, the 100 mile wilderness (hereon abbreviated as HMW) is not known for its cellphone coverage. The only places with strong signal were on the tops of mountains. Tops of mountains were also (in our experience so far) big on rain, sleet, fog, wind, and cold. Therefore we have been in limited touch with anyone until now. I did keep daily log notes on our progress and will publish that later. In the meantime, here are the highlights of our past 14 days.

Katahdin was awesome. We ascended  on Sunday, the 24th. The summit was windy and wet, but still breathtaking. Ian and I ascended with a group from my Scout troop. Ian and I also registered with the Baxter State Park rangers. We were SOBO thru-hikers number 2 and 3 to register. 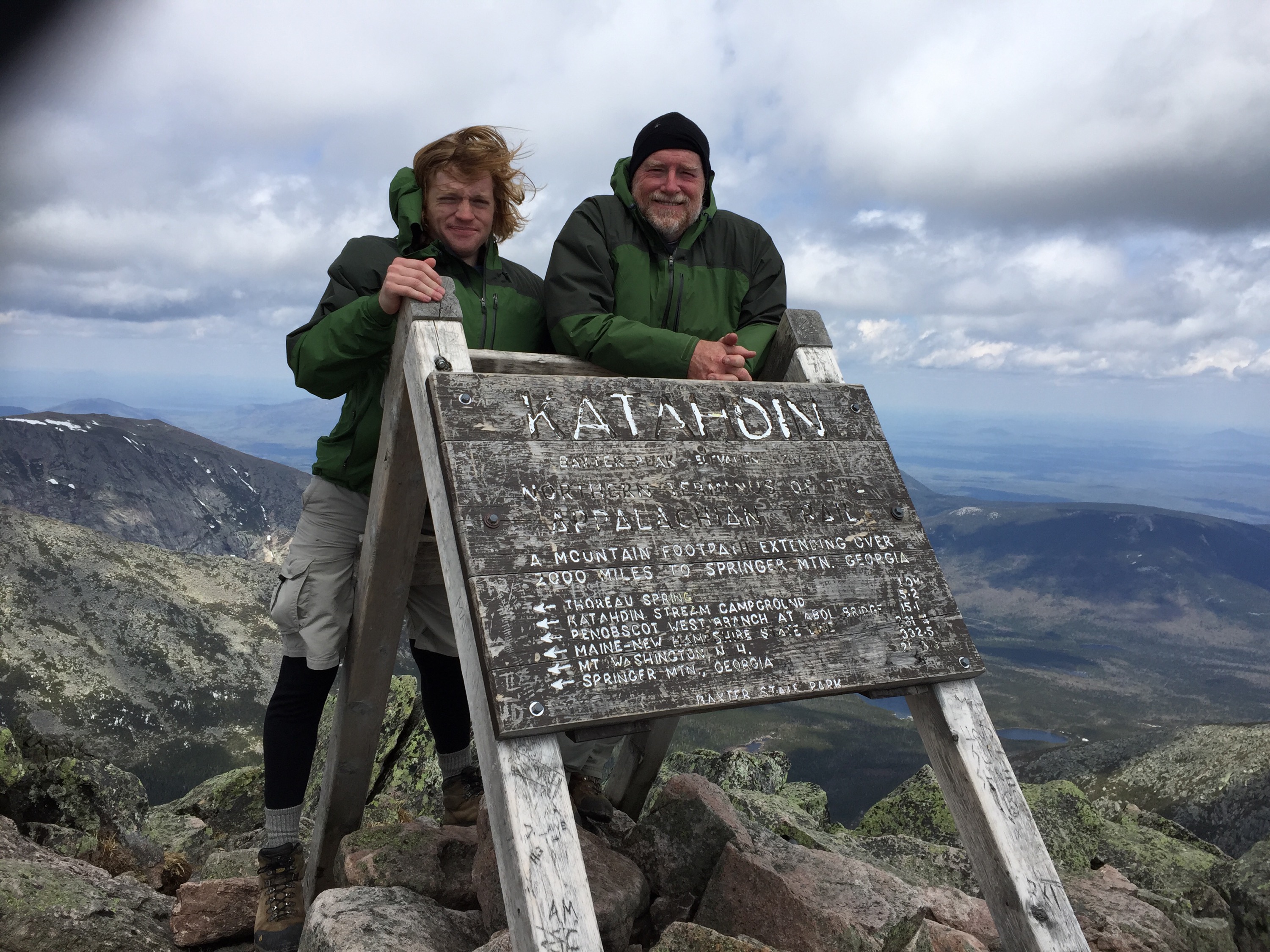 On Monday (Memorial Day) we said goodbye to the Scouts and to our family, and started walking. By Monday night we were camped at the Hurd Brook shelter and starting our journey through the HMW.

Maine is breathtakingly beautiful. The HMW is also an exercise in contradictions. We saw very few people, often going the whole day without meeting anyone. Virtually everyone we saw was hiking the other way and warning us about “the blowdown”. We passed some people who seemed “odd”. As time progressed – and we got dirtier – we realized that the “oddness” was that these people were clean – as if out on a day hike. And they were! There are many camps hidden in the HMW and many ways in and out. So it is remote and “unpeopled”, but not that much. 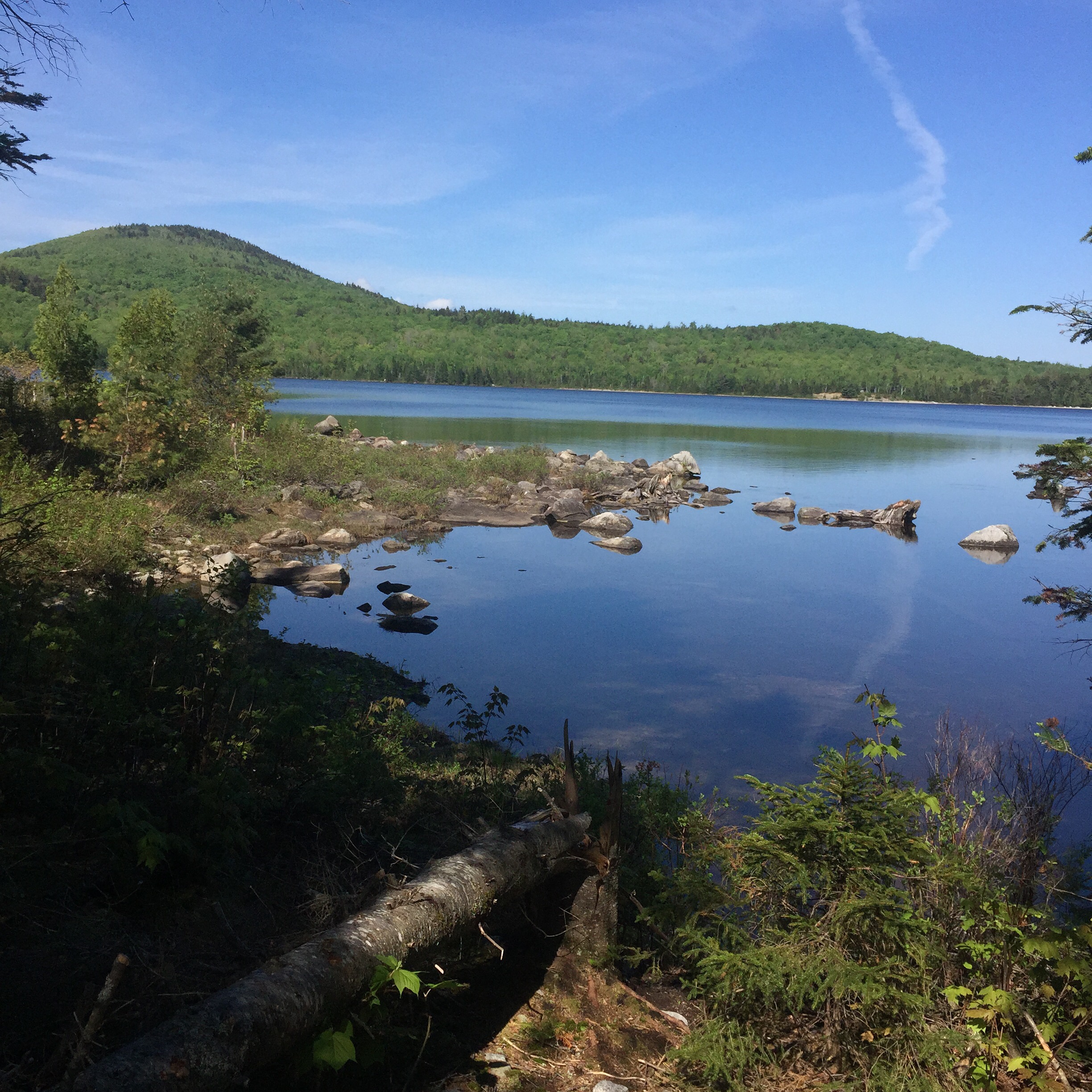 Second lesson: it sucks to get injured. On the fifth day, about 60 miles in, I slipped on a log and landed on my right ankle. It was a severe and painful sprain. Our pace slowed, our mileage dropped, and things got tougher. We wrapped my ankle well, and deliberately took some very short days. Then I got whacked in the left eye with a tree branch. It got very red and I took my left contact out. Now I was one-eyed and one- legged. And then,we hit “the blowdown”.

Blowdown is the name given to trees and branches knocked down in storms. To give and idea of the magnitude, try to imagine Nature playing a giant game of Pick-up-sticks using full grown trees. In many places, the trail was completely blocked leaving you to decide whether to go over, under, around, or through. Our pace slowed to a crawl. 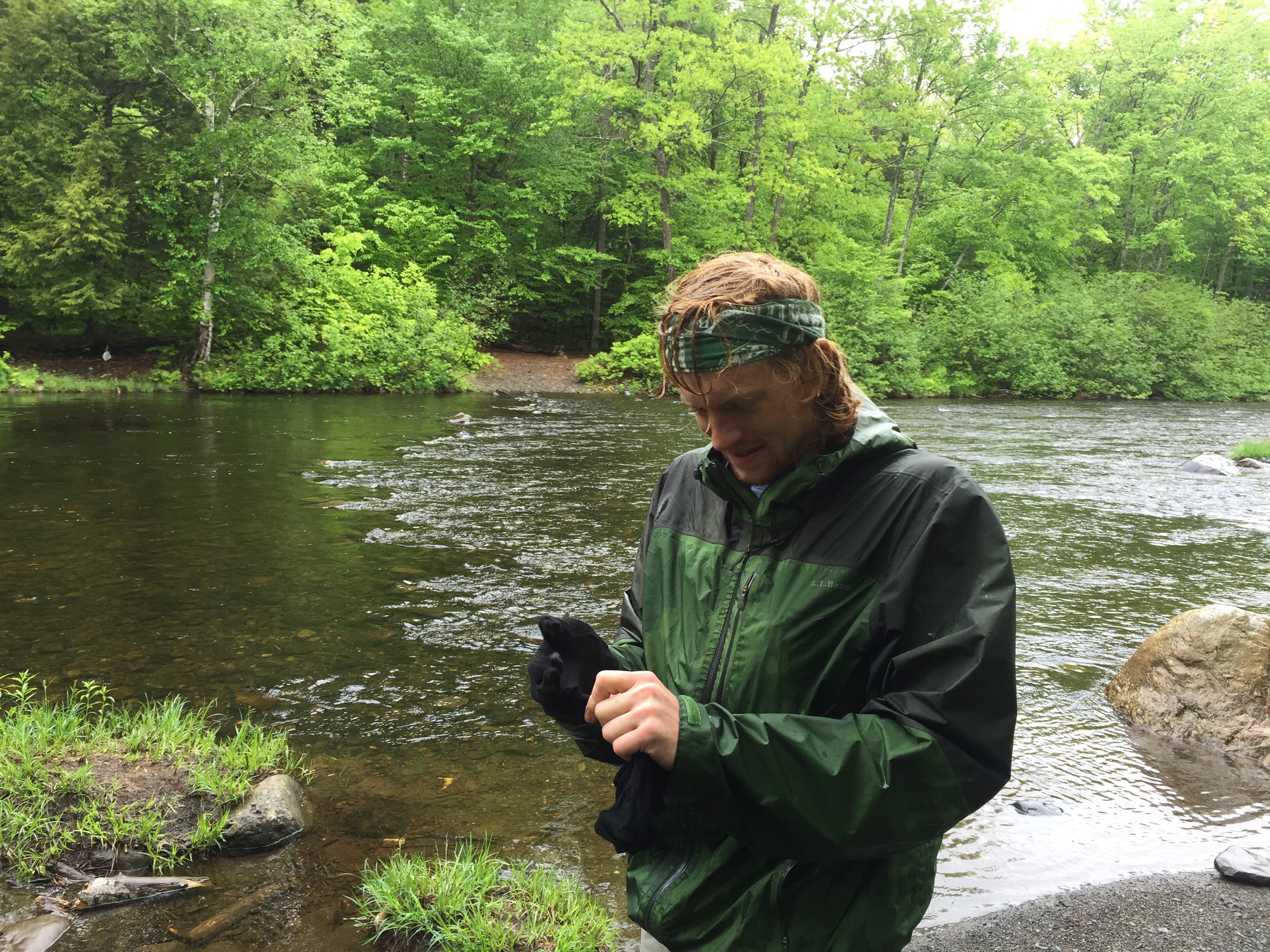 Thankful for my hiking partner

Having someone with you when you are injured is a huge morale booster. I was – and am- glad to be hiking with Ian. But once I was dealing with the sprain, he was critical to me keeping my morale and determination high. I felt much more confident that we would successfully soldier on with him there. He also helped in many ways – like getting water at camp, or ferrying my pack across a difficult stream ford. I am sure I would have given up and looked to be rescued if he wasn’t there. Instead, we ended up being driven into Monson, toasting each other with our beers – the first two SOBO’s to be picked up at the Monson trailhead this season.

We did not find the mosquitoes or black flies to be too bad on our sojourn – a contradiction to other’s commentary on their experiences. Then we realized that on the days we did the “bad insect sections” of the HMW were cold and rainy. So those seemed to be the two choices: sunny, warm and buzzing; or cold, wet, and insect-free. We decided we preferred the cold and wet. 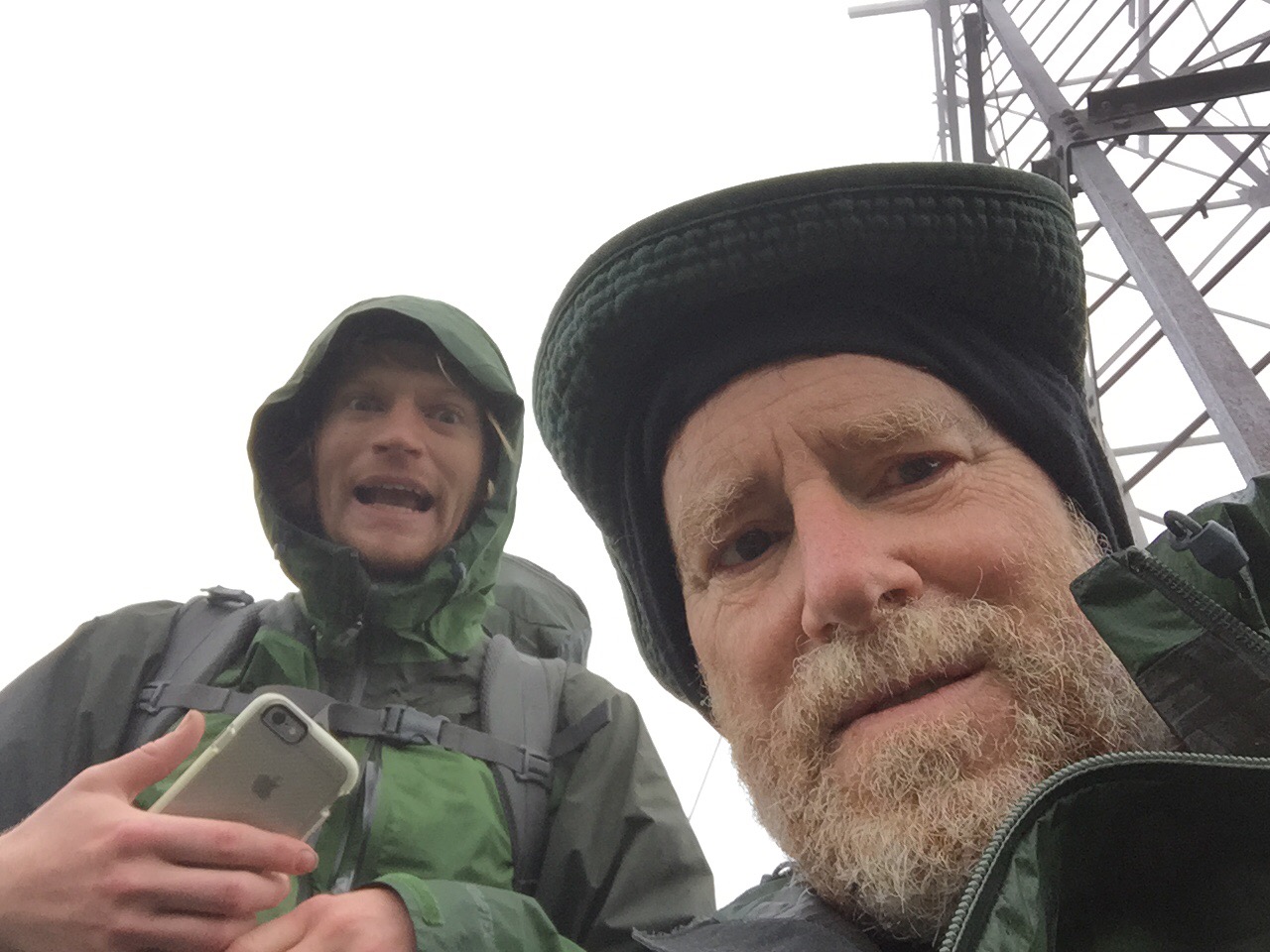 We reluctantly learned our feet would be wet and to just get used to the fact. We spent the beginning doing the usual gyrations to avoid the puddles and the mud – hopping from rock to rock, balancing on logs, stones and roots, and practicing our long jumps over puddles. That’s how I ended up slipping and spraining my ankle. Finally you just say “#%*!!-it” and walk through the puddles and the mud. You could always rely on the knee-deep stream crossings to wash your boots and your pant legs.

Deer and moose poop was everywhere, even though we never saw a deer or a moose. It is clear that they do not understand the principles of Leave No Trace. The weird thing was- lots of poop but no footprints! Somebody explained this was a spring phenomenon. The deer an moose poop all winter on the trails and it freezes. In the spring, the snow melts and all is revealed until it decomposes, gets stepped on, or whatever. So you start out with this natural aversion to deliberately step in poop. But it doesn’t last.

While no deer or moose sightings yet, we did see tons of red squirrels, a huge tan rabbit, grouse, and quite a few snakes. The snakes were all the same kind. I stepped on one and sat on one. Ian got in an argument with one and named another “Karlor, Keeper of the Privy”. The one I stepped on was camouflaged pretty well in the middle of the trail. I never even noticed. The snake just bolted into the woods after startling Ian. 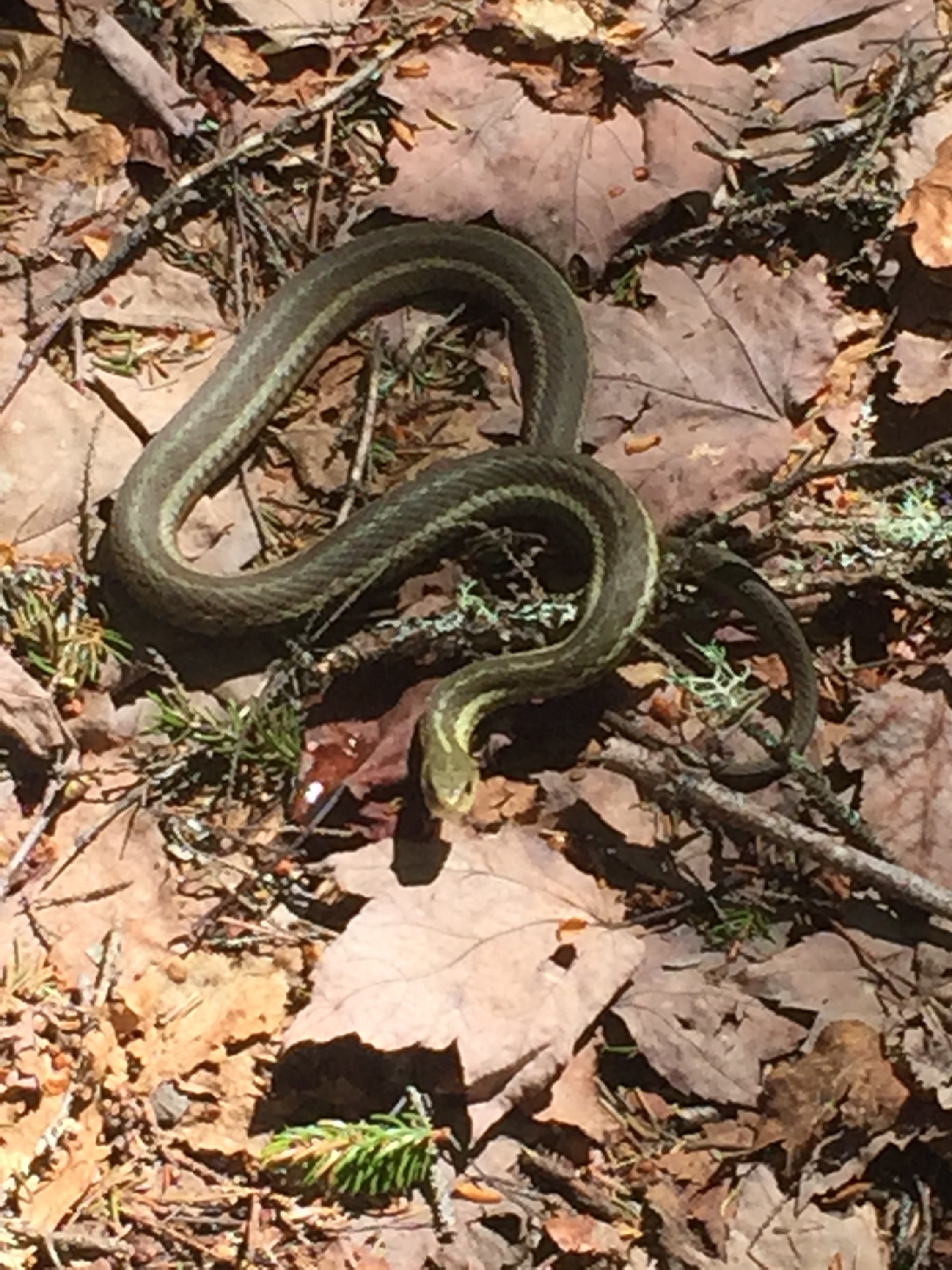 The snake won the argument and we moved aside

The one I sat on was sunning itself on a rock ledge next to a logging road where we decided to take a break. It slithered off as we approached. I used the rock as a seat to eat a snack and re-tie my shoe. When I got up the snake was back on the rock ledge, just chilling and eyeing me when I turned around. Apparently he was extremely comfortable with the warm rock sheltered by my warm butt. Can’t say I was the same.

Ian came across one that decided to defend the piece of trail it was on. We photographed him and gave him wide berth. And Karlor just liked to sun himself on the rock step to the privy at the Cooper Brook Lean To. Every time you approached the privy he would slither under the rocks. As soon as you left, he would be back guarding the door.

Finally, after a couple of days it sinks in that when you are walking (or limping), everything is HUGE. There is no “distance”, only “time”. Things are “two hours” ahead, or “a day” away. You get up, you walk, you go to sleep. You are happy to be warm and dry. It’s such a different perspective than we are used to.