October 9th was our “biggest” day yet: 23.3 miles. Still not a terribly big day by U.S. thru-hiker standards,especially given how flat and easy the walking was, but the daylight available in October is somewhat less than that of, say, June, and we like to stop hiking by mid-afternoon so we can do our various chores and perhaps socialize a bit.

Our “chores”: first one must select an Albergue and check-in. This involves perhaps a wait, then presentation of pilgrim credential and passport, plus payment (almost universally cash only in Albergues). Then they generally give a very abbreviated tour and assign us our beds. We make some sort of pro forma argument about who gets a bottom bunk (one of us almost always volunteering to take a top bunk), and then we unpack for a while.

Then commences a race to see which of us can immediately get into one of typically two showers, then it’s on almost immediately to wash clothes and get them drying in the afternoon sun (where possible).

After that perhaps some more unpacking and organizing, a trip to the local store to buy breakfast and sometimes dinner, then Milky and I separately think about a plan for the next day (factoring in an updated weather forecast), and then I write up my blog entry for the day.

We hiked this morning as usual for most of an hour in the dark, which I find to be kind of fun, and then after a little searching we were able to pick up a recommended alternate route that took us off the road in favor of a track along a stream.

We stopped for breakfast in a little town that had a 19th century round building called a Palomera, which had somewhat explanatory signs in Spanish. We at first thought that this was some sort of granery, but it didn’t really fit. Based on the many niches and the name I suspected it might have been to house pigeons, and indeed that’s what it was. Did they use this for communications or sport? I suspect both; one of the signs suggested that such structures (of various shapes and sizes) were once common in towns, at least those in this area. 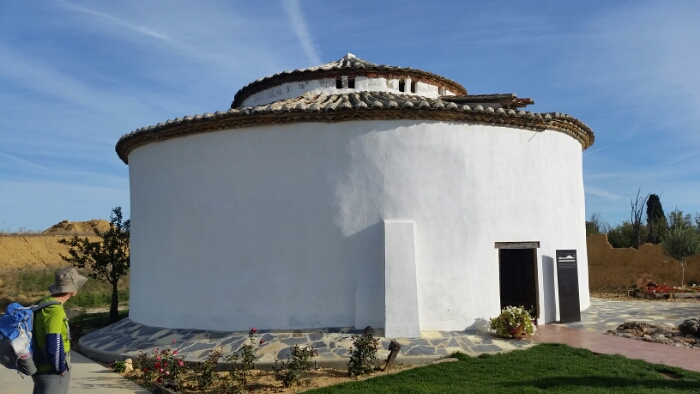 More “meseta” walking today, very flat, very little shade, and Milky in particular set an aggressive pace that got us to our goal of Calzadilla de la Cueza. Our young German friend Simon was checked into the Municipal Albergue and liked it, so we went there too, a decent Albergue for just 5 euros each.

Apart from Simon I think we might have again walked away from everyone we’ve met, but we still have opportunities along the way to meet new people, so we are content.

At the end of the day we felt a bit tired and footsore but in fine spirits.

We were efficient getting out the next morning (Saturday October 10th), leaving our Albergue at 7:10 am, so that after we left the village the stars were still bright. Orion was prominent, along with the Pleiades, and the sliver moon was mesmerizing.

After 15 km or so we stopped for breakfast, which we shared with a friendly Swiss woman. Close by where we ate is a hill with little doors at the base that every one who sees compares to a hobbit neighborhood. I asked at the bar we ate at, and it turns out that behind the little doors are bodegas – – – wine cellars. So no Hobbits as such, or at least likely no sober ones. 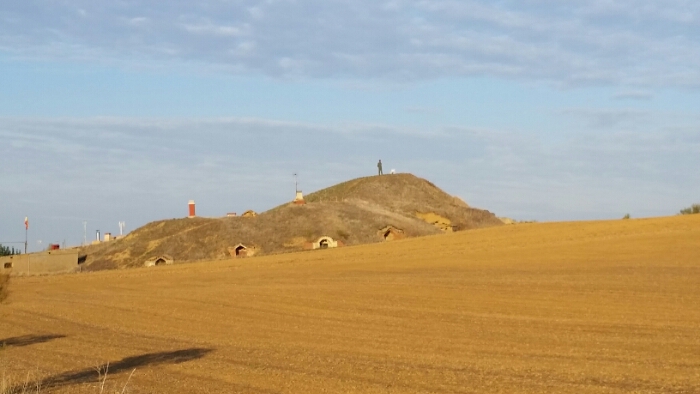 Not actually a Hobbit Hill

Later in today’s hike, Lucky and Milky walked for a time with a young woman from Korea. They said that she was quite interesting, having travelled the Silk Road, and she used to work for a Korean TV station.

Meanwhile I hiked some with a German girl named Melissa. For some reason, it seems that every German I talk with is from Baden-Wurtemburg (west of Bavaria).  Melissa is studying tax law and will perhaps go on to work for the government, at which point, I suggested to her, everyone will hate her (she laughed).

At one point I asked what her favorite hiking trails are in Germany, to which she replied “I don’t know, I don’t like to walk”. In context I found this pretty hilarious.

We intentionally made this an easy hiking day, stopping at a neat (and surprisingly empty) Albergue on the outskirts of Sahagun. Our plan from here is to hike about 18 miles tomorrow, then about 16 to the city of Leon, where we’ll take our first full day off. 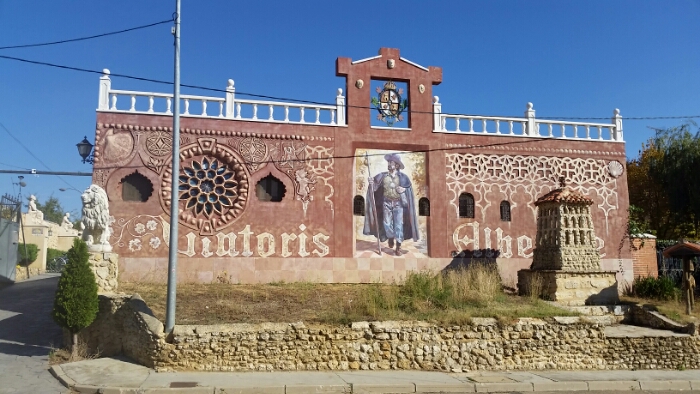 Our Albergue in Sahagun

It’s supposed to be cloudy with showers tomorrow and raining the next day. But most days after that will be nice, albeit with gradually declining temperatures.

Milky and Lucky borrowed bikes from the Albergue to tool around the town in; they had only two functional loaners, but I was quite content to just kick back and relax!