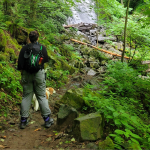 My Hammock Camping ‘Big 3’ on the AT

With exactly one month to go before I hit the trail, here’s my explanation-meets-gear-list: Why I’m choosing a hammock, and my “Big Three.”

I made the decision pretty early on in my thru-hike preparation to start the journey as a hammock camper for a number of reasons. Growing up in New England and exclusively camping on the east coast has given me an appreciation for several of the strengths of a suspension-based setup:

The Appalachian Trail has trees. So. Many. Trees. (Let’s face it– Perhaps too many trees for those among us who find themselves motivated by sight-seeing and spacious views.) While there are rare “treeless” portions of the trail, the longest of them is a 13-mile stretch above treeline between Mitzpah Hut and Mt. Madison in the Whites. While I could go either way with a tent-vs-hammock choice, I’d like to use this feature of the trail to my advantage.

Since my childhood days of brief backpacking overnights at summer camp, I have been deeply familiarized with the plight of finding the perfect spot to set up one’s tent on our rocky, rooty, rarely-actually-flat terrain. Am I perfectly aware that the nature of the AT means that there are plenty of previously-used tent sites along the trail? Yes. Do I want to have to pick up every errant stick or stone in the area of my tent’s footprint (or risk crushing baby vegetation I may not have noticed under leaf cover) after a long day’s hike? Absolutely not.

The east coast gets rain. Much like trees, one might be safe to argue that we get too much rain. The ever-present (often downright oppressive) humidity means that it’s very possible to bed down for the night only to have an unpredicted massive, drenching storm roll in before morning. While it’s not likely I’ll ever find myself bone-dry in a storm, my years of experience find it comforting to have myself (and my things) up off of the ground, rather than putting my faith in my site selection and my tent’s bathtub floor.

All those things said, I also find being in a hammock wicked comfortable. (Wicked = “super” for the non-New Englanders reading this.) There seems to be a belief in the backpacking and camping world that only those who sleep on their backs find hammocks truly comfortable. As a finicky sleeper who exclusively sleeps somewhere between what First Aid calls the “recovery position” and a full-on stomach-sleeper “ballerina pose”, I disagree. I’ve come to find that the cradling effect of a hammock applies light pressure in such a way that I find more positions comfortable enough to fall asleep in than I ever do in a bed. Maybe I’m just a freak of nature? *-Insert shrugging gesture here-*
I wouldn’t be surprised.

All the logic and reasoning in the world wouldn’t make much sense if I didn’t think getting a restorative night’s sleep in a hammock for six months straight would be sustainable. In my case, I suspect it may be preferable by far.

For those who aren’t already familiar with the concept, the “Big Three” are generally a backpacker’s shelter, sleep system, and backpack. Beyond being the largest pieces of equipment a hiker carries in terms of physical size, they’re also the “biggest” in regards to weight, expense, and importance.

All of the information in my “why” section above means that the first item on my list is also the most non-traditional:
My Kammok Mantis UL hammock tent. 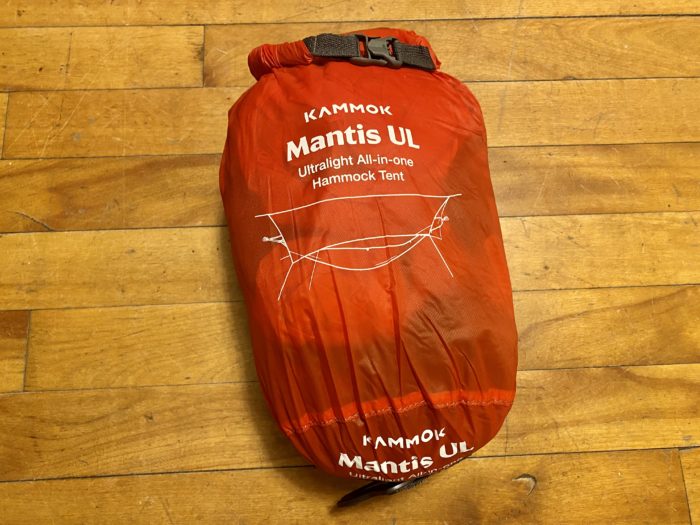 The Kammok Mantis UL. Yes, there’s a whole hammock, rain fly, and all the periphery in there. I swear.

I’ve found this hammock tent system to be exactly what I was looking for as a 5’2” backpacker who doesn’t find it difficult to get a flat lay in most off-the-rack hammocks. (Though I suspect this hammock is likely to be surprisingly spacious for anyone ~5’10” or under.) I absolutely love the gear pockets/shelves near the guy-out points, though I could do without the sewn-on integrated stuff sack. For the price and weight, this has served me phenomenally as an all-in-one system over the past year.

I use a small stuff sack to hold my tent stakes rather than the integrated stake slots on the outside of the bag (I began to worry about their long-term durability). I’ve also added a small piece of flagging tape to each of the tent stakes after some experiences where I found them difficult to locate when cleaning up in the morning.

Given that this is a reasonably inexpensive shelter (as far as hammocks and backpacking tents go) that I was able to get on sale for an additional discount, I also feel that I’m able to be slightly more flexible if I should decide to change my mind at some point along the trail. I doubt that I’ll make that decision, but I’m happy to know that I have that wiggle room if it becomes necessary.

I’ll be carrying a quilt (‘topquilt’ in hammock lingo) during my thru-hike instead of a traditional sleeping bag. If you’re curious about quilts and how they differ from sleeping bags, The Trek just posted an article that you may find interesting.

My UGQ Bandit in all its fluffy glory.

A short length would probably have been sufficient for me… However, since stomach sleepers generally require a slightly longer bag to be comfortable, I decided not to skimp just for the sake of shaving off a few grams in weight. Similarly, I chose the shock-corded Dynamic Tension Control to help the quilt stay tucked in around me on the sides in order to retain as much warmth as possible. As a trade-off, I opted not to have mine constructed with a draft collar, since I should have plenty of room to tuck the quilt itself around my neck and shoulders.

I love that this bag offers the dynamic tension option, and has a zippered and draw-corded footbox to allow for venting in warmer temperatures and versatile use in the future. I know there are more popular quilts out there, but I have been in love with this bag since the moment it arrived at my apartment, and I truly could not be happier with it so far.

Being a hammock camper, I also have an underquilt to serve in place of the sleeping pad a traditional tent camper would use. My underquilt is the now-discontinued Western Mountaineering Slinglite (20F/-7C). This is a fairly long underquilt coming in at 74in/188cm, and completely insulates me in super cozy fashion. 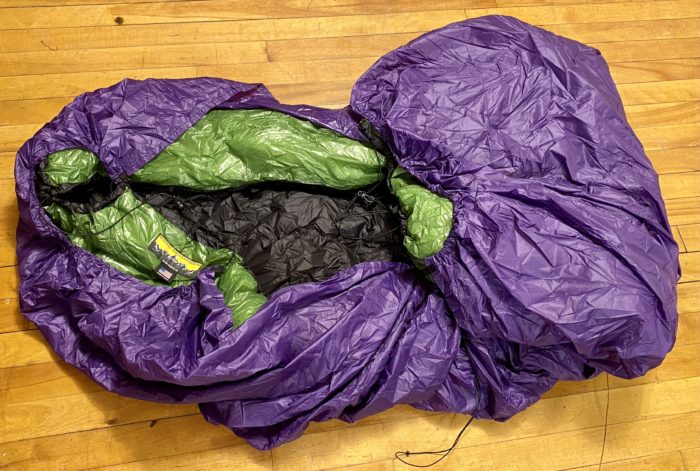 WM Slinglite UQ and Dutchware UQP: It’s not just a mushy lump on the floor!

While my top quilt is a 0-degree bag, I have found no need to upgrade to a 0-degree underquilt to match. This could be due to a combination of being a relatively warm sleeper, sleeping on my stomach, and utilizing a longer underquilt as well as an underquilt protector (which some people claim adds about 5 degrees of warmth). I’m not quite sure what’s going on there, but the balance I’ve struck has worked well for me personally.

As for the underquilt protector, that’s Dutchware Gear’s 2QZQ which I’ve rigged up semi-permanently onto my underquilt. While UQPs are pretty optional, and I do trust the weatherproofing on my Slinglite—I’m utilizing an UQP in order to keep as much mud and rain off of my setup as possible, as well as increase the wind resistance (and therefore warmth retention) of my underquilt in the colder starting months.

(*WM’s website lists it at 15oz, but mine has consistently come in underweight no matter how many times I put it on the scale.)

What pack I’d be taking with me on trail was probably the single piece of gear I spent the longest time mulling over and thinking about from the moment I finalized my decision to attempt this hike. As someone with a short torso (I’ve been measured at anywhere between 13 and 16 inches, depending on who’s sizing me. Two different REI fittings even gave me two very different numbers.) and broad shoulders, I have had an unusually difficult time finding packs that are consistently comfortable for me.

(I’ve since narrowed myself down to being comfortable with both 14” and 15” pack lengths. 13” sits too high on the hip, and 16” bags tend to rise too far off my shoulders.)

As luck would have it, I happened to cross paths (quite literally) with an older gentleman who was out section-hiking a portion of the Long Trail while I was camping and hiking in Vermont this fall. I asked him if he happened to be carrying a ULA Circuit (he was), and we got into one of the most fun, enjoyable ‘gearhead’ conversations I’ve ever had. He gave me a quick tour of his favorite features on the bag, explained that he had two more ULA packs at home, and gave a glowing endorsement of how comfortable they’ve been for him at an older age on frequent excursions before we parted ways. While this is one of the weirder examples of how “the trail provides”, I couldn’t stop thinking about it for the rest of my hike–

I happened to be on a section of the AT, and I just happened to meet up with exactly the type of person I’d hope to give me a down-to-earth review of what happened to be the exact bag I’d been repeatedly drawn to looking around online. It was either on that trip, or very shortly after, that I ordered the pack with my fingers crossed and the belief that if it didn’t work, I’d take the loss and return it or try to sell it online.

I wish I had caught that man’s name during our chat, because I wish I could thank him directly.

Ahem. Rambling story over.
My pack is the ULA Circuit in Small/Medium with water bottle holder attachments. 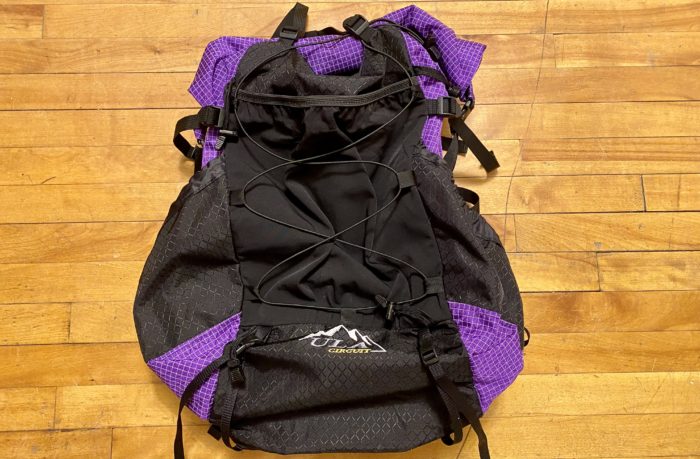 ULA Circuit. … Have you figured out my favorite color yet?…

As worried as I was that my torso is the absolute shortest possible listed for their Small adult size (the kids style wasn’t available at the time, otherwise I would have gone that route. Truly my only minor regret.), I haven’t had a lick of trouble with the fit. I won’t digress into turning this description into a full-length ‘review’– But there really aren’t words for how much I like this pack.
(Thank you, random Long Trail man!)

And there you have it, folks– A hammock camper’s explanation and ‘Big Three’ post. I still have a little finessing to do with my full kit before I do a complete gear write-up, but I hope you found this “part 1” informative. Please feel free to ask any questions you may have for me in the comments below!