Last we caught up I was leaving Front Royal to finish up the state of Virginia. Many things have transpired since then, so here it goes!

Coming out of Front Royal, I hiked 5.5 miles into Jim and Molly Denton Shelter. Holy wow was this place nice! A huge front port with benches around and a big chair, a cooking pavilion, horseshoes, even a solar shower (that wasn’t working due to lack of rainfall). It was a nice place to stay and a hard place to leave. Longspoon and I stayed here, and I met Gennie, who was section hiking during a break from work. We all sat and chatted over dinner. Speaking of dinner, my grandma has been dehydrating some stuff for me and I finally got to try it out. The dehydrated meat and veggies she sent CHANGED MY LIFE. I had Mac n Cheese with rehydrated ground beef and green beans for dinner. Yummmmm. 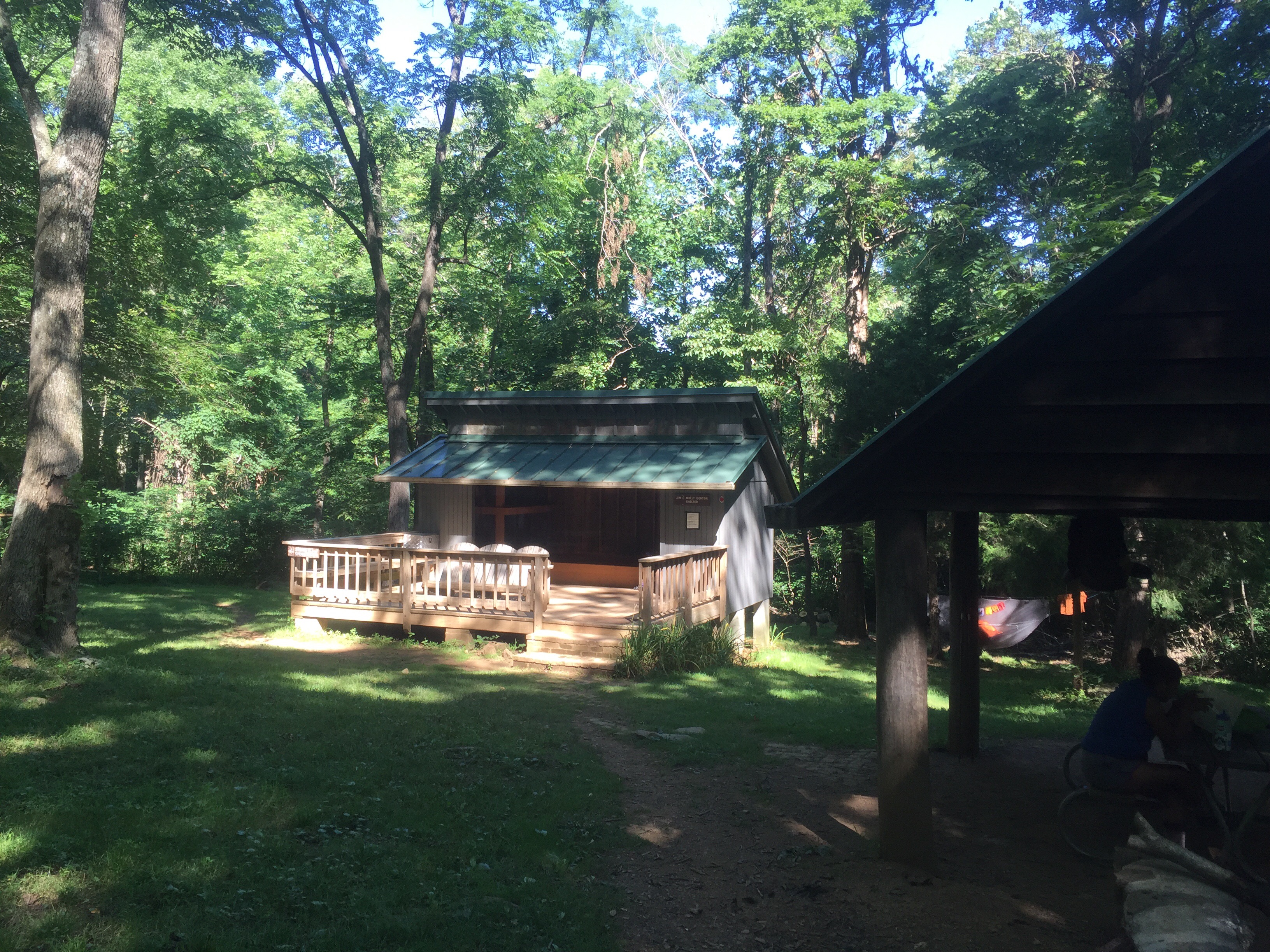 The next day I left camp super late. Longspoon decided to take a zero here. This really was a difficult place to leave. Gennie and I hiked three miles to a road crossing, where I called The Applehouse Restaurant for a ride. I hung out there and charged up my phone and had the most incredible burger with a fried egg on it. I stayed for 3 hours because I simply could not get motivated to leave in the heat. Trail tip: The folks at this place are super hiker friendly and I highly recommend it!

I went back to the trailhead and killed another hour procrastinating hiking in the heat. Cold Turkey, Dr. Kool Aid and Tippy Toes caught up to me. I was sure they’d passed by while I was at the restaurant, but the heat was getting to them, too. We had another 7 miles to do and finally bit the bullet and started walking. 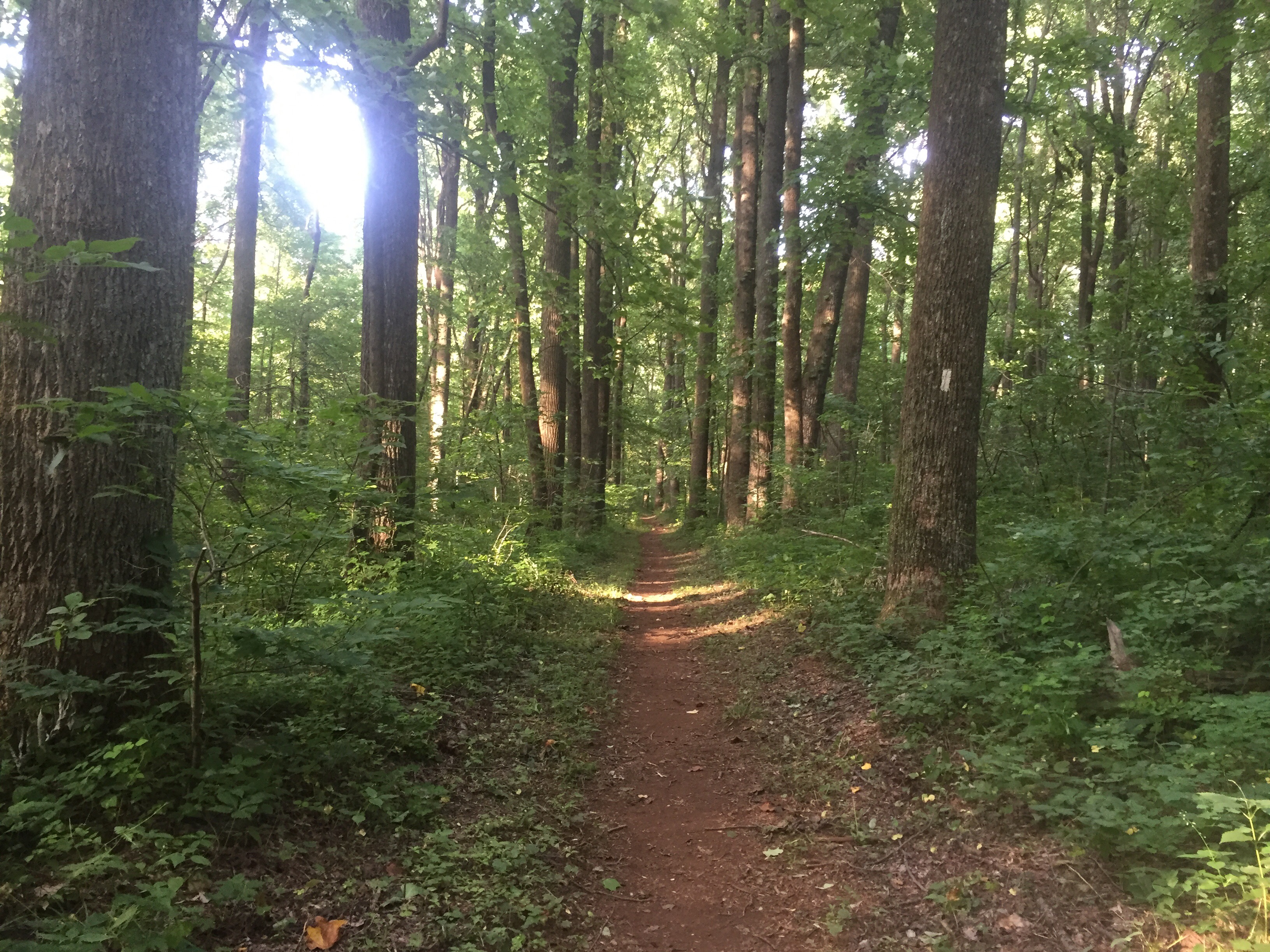 A beautiful stretch of trail before Denton shelter

We all made it to Dicks Dome shelter that night, with me rolling in nearly at dark. Having only done 10miles, I was still wiped out. Everyone did their chores and went to bed. Trail tip: this was by far the nastiest privy I’ve seen yet on my journey, and weirdest shaped shelter. Apparently there is a new shelter on site under construction, but I didn’t bother to walk to see it. 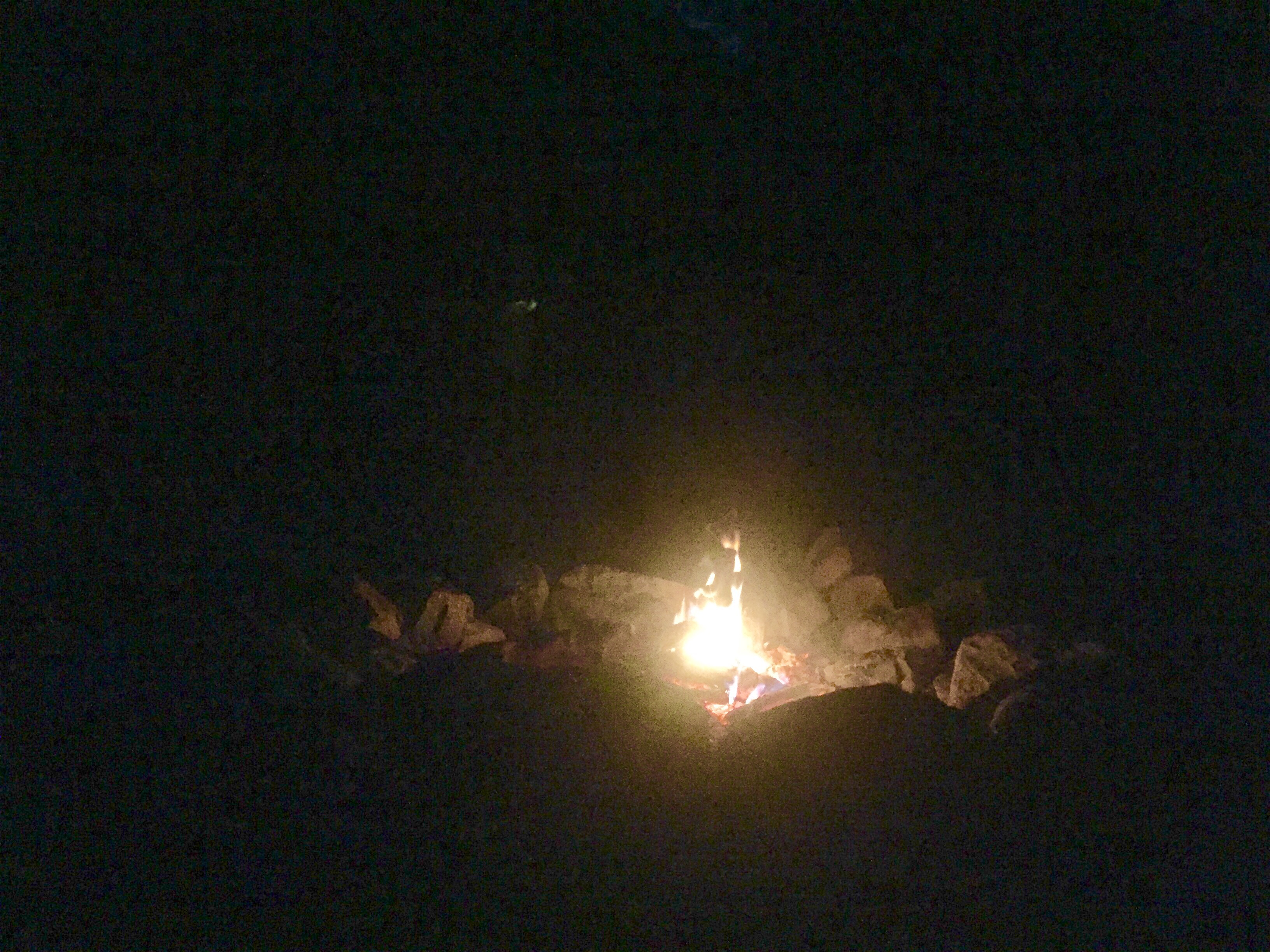 The following day I crossed through Sky Meadow state park, where tons and tons of wild berries were growing. This was a saving grace; if not for those berries, the sweltering heat would have really had me in the dumps. I killed a lot of time picking berries and chatting with some locals who came up to pick them as well. I stopped for a long break at Ashby Gap waiting on Lucky Charms, a class of 2015 hiker who came out to hike with me for a couple days. We trudged on to Rod Hollow shelter in the heat and got set up for the night. Lucky packed in a few beers which we chilled in the spring and enjoyed over dinner and a campfire. I hadn’t had a campfire in AGES it felt like. I also enjoyed chatting with a section hiker over dinner. Can’t remember her name, but we talked a long time about our food system and ag industry in the US, which I really enjoyed. 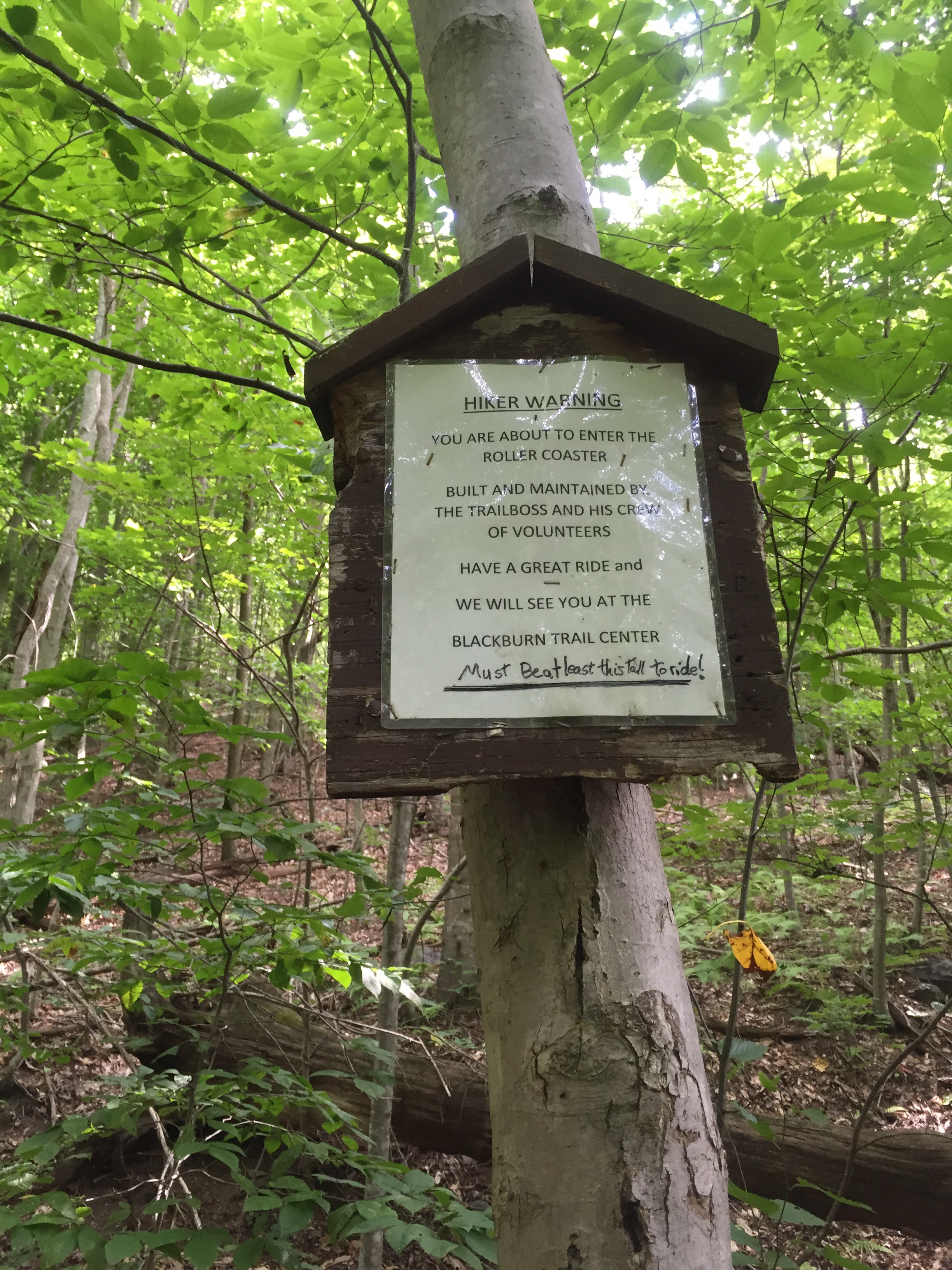 Welcome to the roller coaster

The following day may have been my worst on trail yet. Temps were in the 90s and we entered the famed “roller coaster”. Everyone talks about the roller coaster like its some grand, difficult thing. Truth be told, the climbs are a little steep and there are a lot of them, but the climbs aren’t long and in any weather other than 95 with no breeze it wouldn’t have been unbearable. However, with the conditions it turned out to be completely miserable. This was the kind of day that, if I’d never hiked before and I hiked that day, I would never want to go hiking again. I stumbled up to Bears Den Hostel so exhausted from heat and exertion that I couldn’t formulate sentences, and that was after only 10 miles of hiking. (Trail tip: Bears Den is only a couple tents of a mile off trail and super nice). On a positive note, I did pass the 1000 mile mark (I’ve only hiked 400 miles to this point this year, but have hiked most of the first 1000 miles if you count last year) and Silly made it to town for her birthday! She and her dad picked us up at the hostel and we went into Winchester for the night and had Mexican food and margaritas. 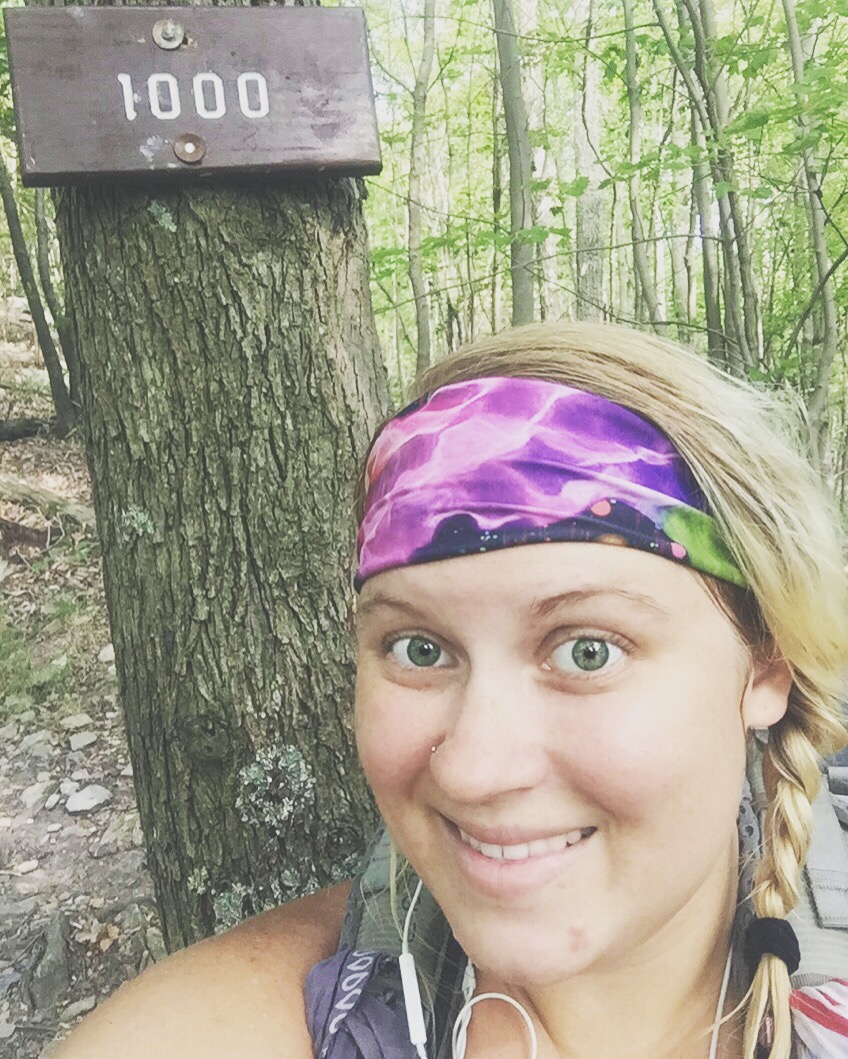 I decided I needed a zero day the following day to recover from my heat exhaustion and just mentally try to get back in the game. Silly wanted to see Harper’s Ferry before going back home, so her dad drove us all up to West Virginia for the day. It was so unbearably hot that I just stayed inside while they wandered around town, though the A/C at the bar was broken and it was almost as sweltering indoors as out. I really wanted the opportunity to get on the river, and we needed to be near the trail to get back on the next day, so we all decided to go back to Watermelon park (remember this from my last update??)

While stopped at Walmart for snacks, I got a message from Miss Janet asking if we knew anyone who wanted to jump up to the Vermont area. She was headed that way and looking for hikers to take along on the ride. Longspoon and I barely had to contemplate this choice before both agreeing we were in. While I had hoped to avoid jumping up any further, the ease with which this decision was made and then implemented cemented the fact that it was the right decision for us. 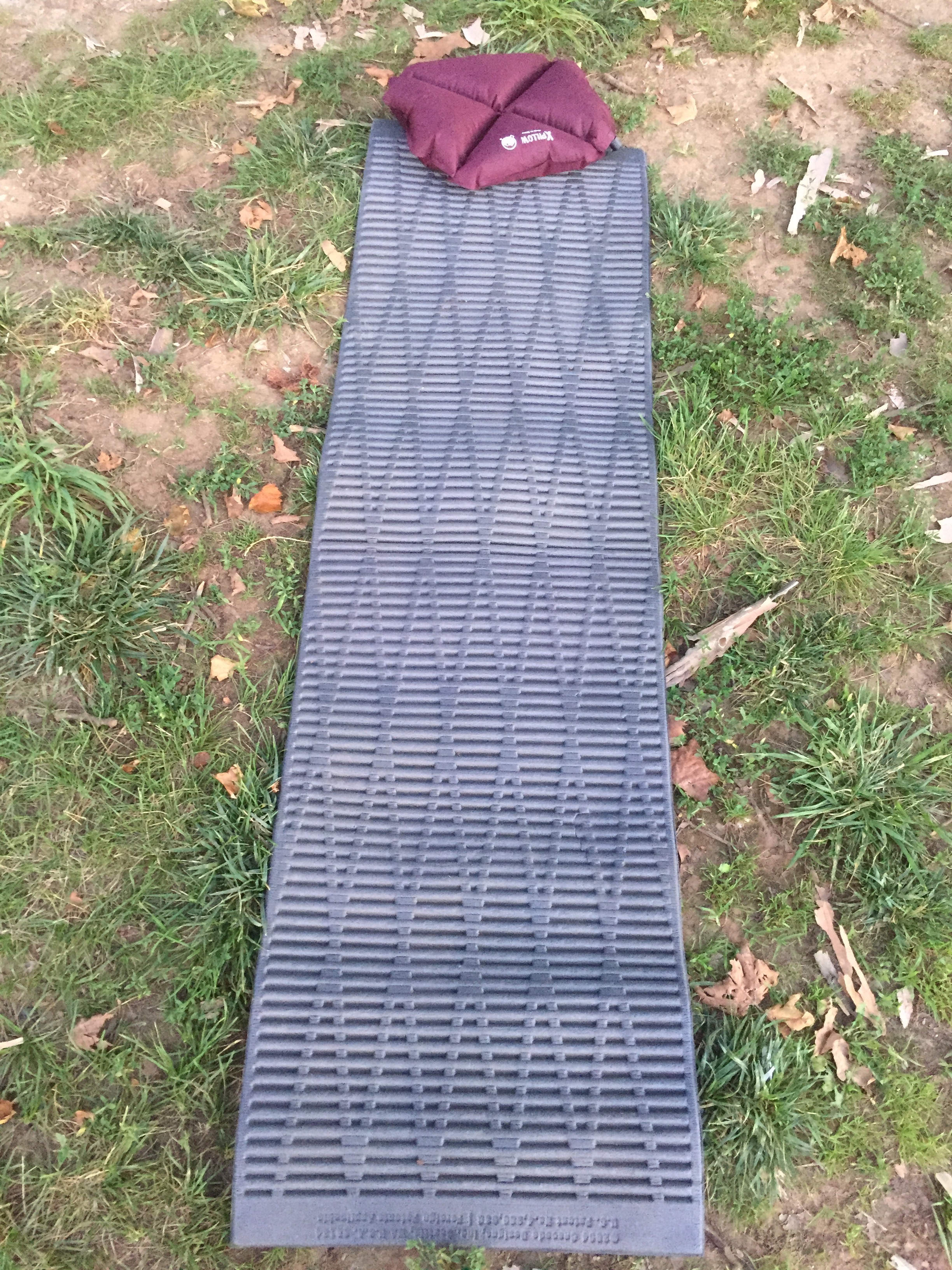 New England, we are coming for you

We spent the night at Watermelon Park and I had possibly the worst sleep I’ve ever had. I tossed and turned all night trying to get comfortable in the unforgiving heat. I tossed my sleeping pad out, kicked off my quilt, nothing helped cool me off. Morning came and I was exhausted. Silly left with her dad to go back home for a few more weeks, and Miss Janet came to pick the rest of us up for a trip back to Harper’s Ferry. 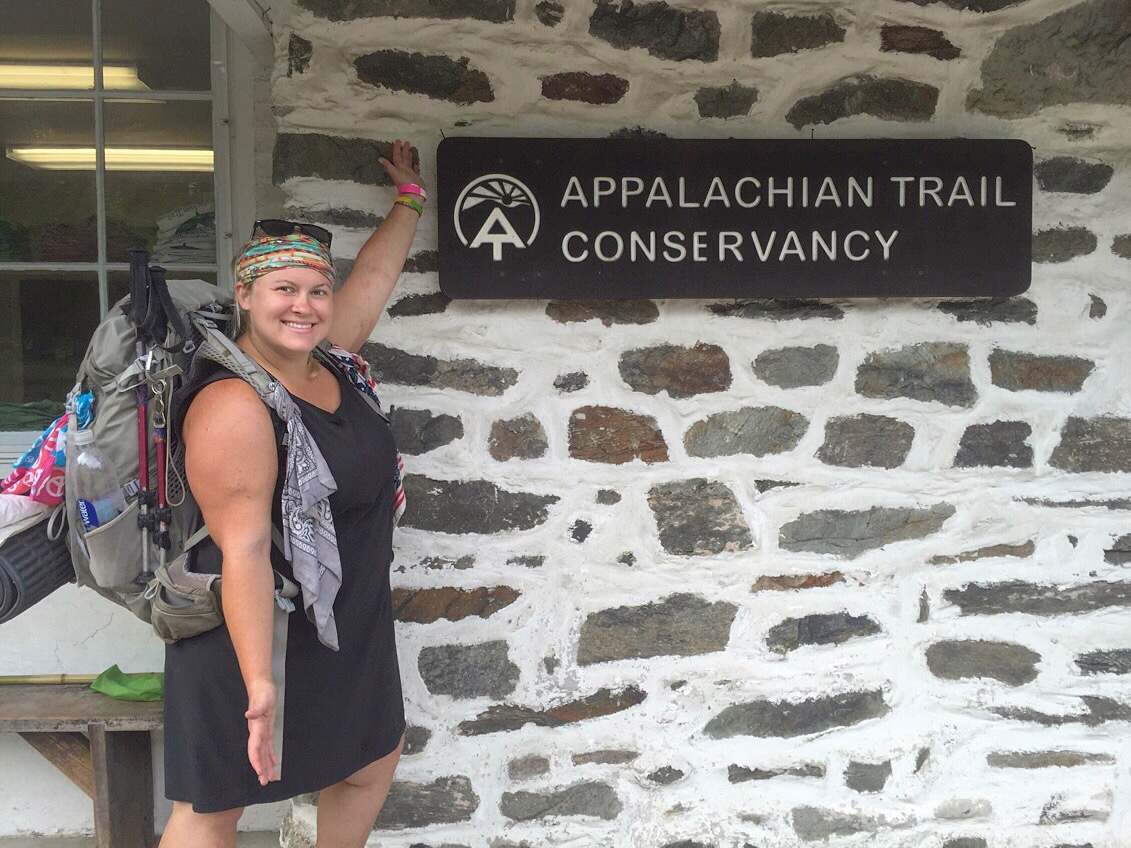 I got my halfway photo taken at the ATC, even though technically I’m about 16 miles shy of making it all the way to town. Miss J wanted to meet up with an old friend, so we grabbed some snacks and a few beers and headed out to spend a few hours by the river. Moments like these are what I really live for on the trail. I’d wanted to get in the river for DAYS at this point and Miss J finally made it happen. It was a great afternoon. 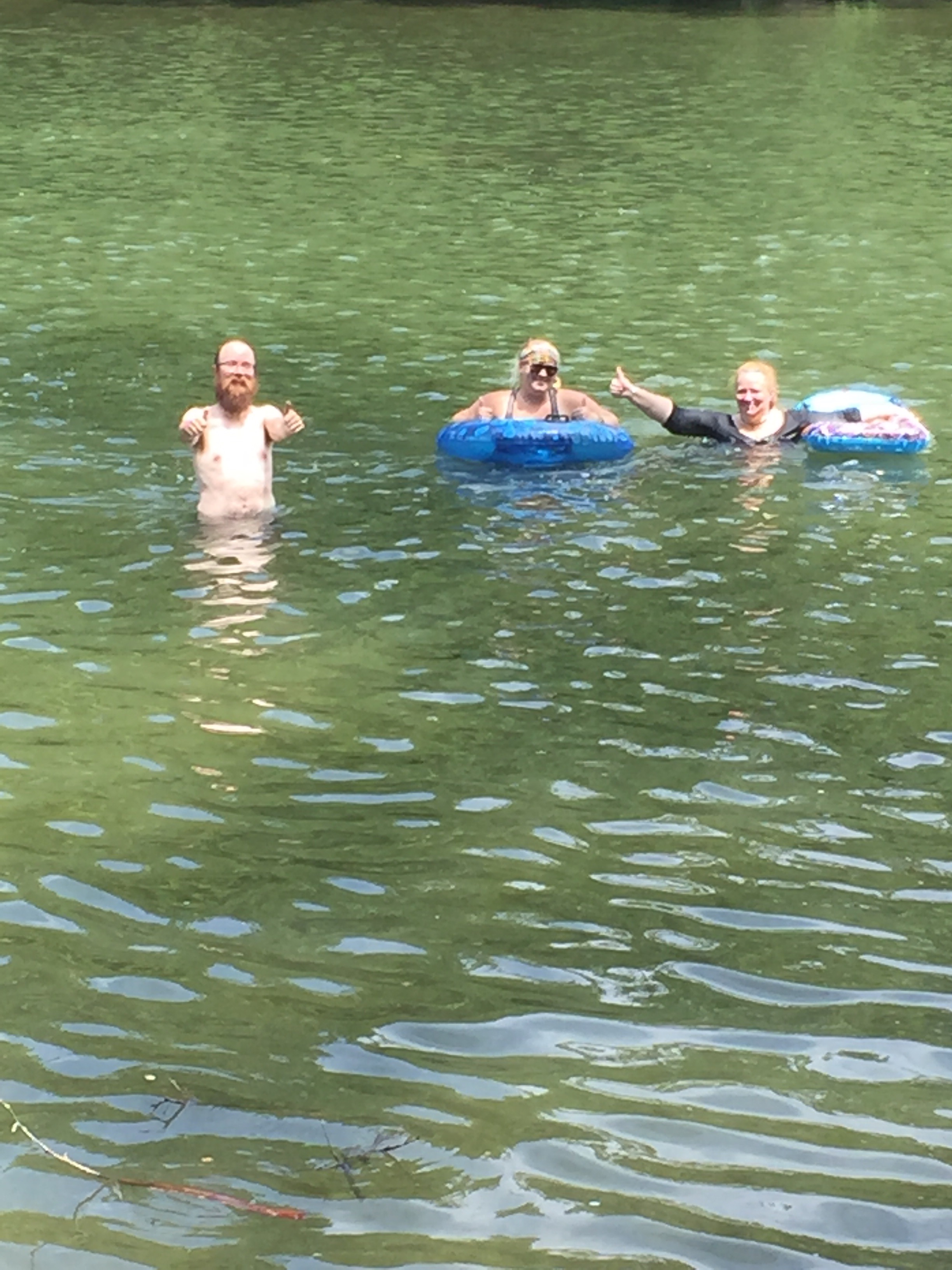 Longspoon, me, and Miss J cooling off in the Shenandoah River

We finally decided we had to get on the move, so we loaded up and headed north. We stopped off at Pine Grove Furnace to see who was there and ended up picking up Giggles to come along for the ride to NY. His brothers live there and he was wanting to visit. Miss J drove and we ended up staying the night at the free Pavilion in Port Clinton, where we ran into many many hikers. There’s a serious bubble in northern PA right now it seems. 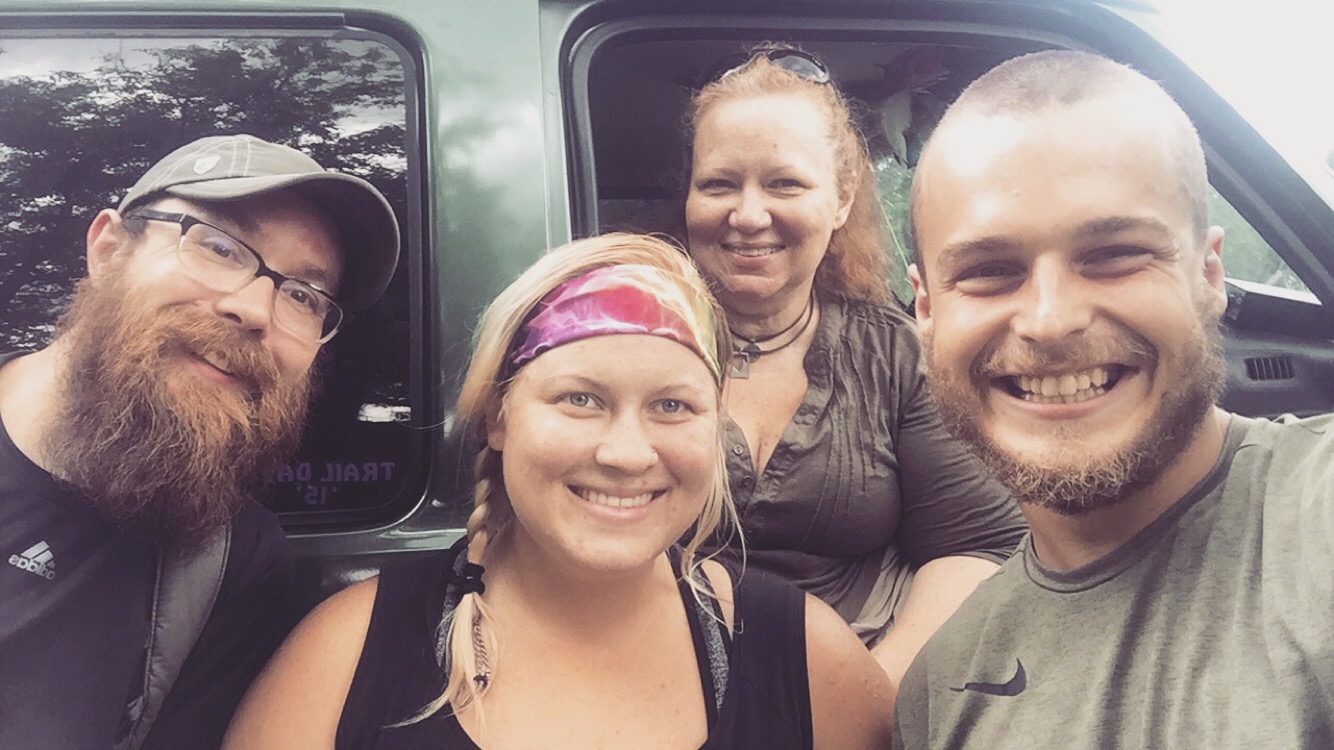 The following day we drove on into NY and said goodbye to Giggles at the Pauling train station before moving northward into Massachusetts. Longspoon and I had decided to start back a bit south of Vermont so Miss J dropped us off with Rob Bird. Rob runs a hostel in TN in the spring then heads up to Massachusetts and rents a cabin during the summer months, where he hosts hikers coming through at the north end of their hikes. This way, he gets to see them twice! We had a great time grilling and chatting with Rob that evening after bidding farewell to Miss J. The next day, we moved from one big van to another and Rob dropped us off in Salisbury, CT to begin the northern part of our “leapfrog” hike. 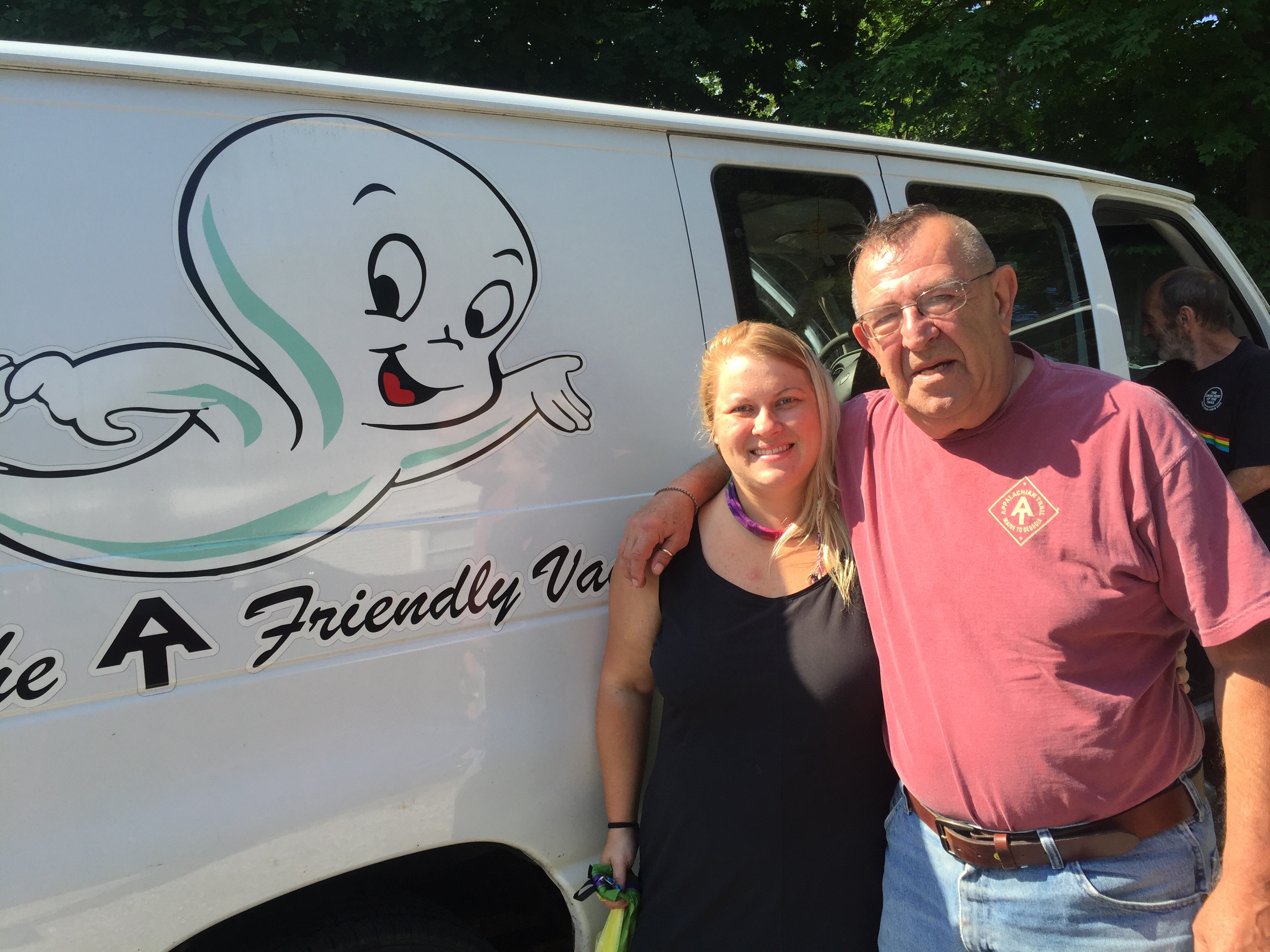 Whew. That was a lot to have happened in a week! So here’s where I am now:

I’m currently sitting at Berkshire South Community Center in Great Barrington, Mass. Trail tip: this place is AWESOME! Free camping and $5 gets you access to showers, pool, and sauna. I hiked from Salisburg CT over the border into Masschusetts and on into GB in three days. These three days have been heavenly and have completely restored my enthusiasm for hiking. The weather has been nice, the terrain has been hard but beautiful, and the time crunch has been lifted. Now when we climb mountains, we get views! I know it will get hot, and we have already dealt with some dry water sources, but I’m terribly happy to be in the north. 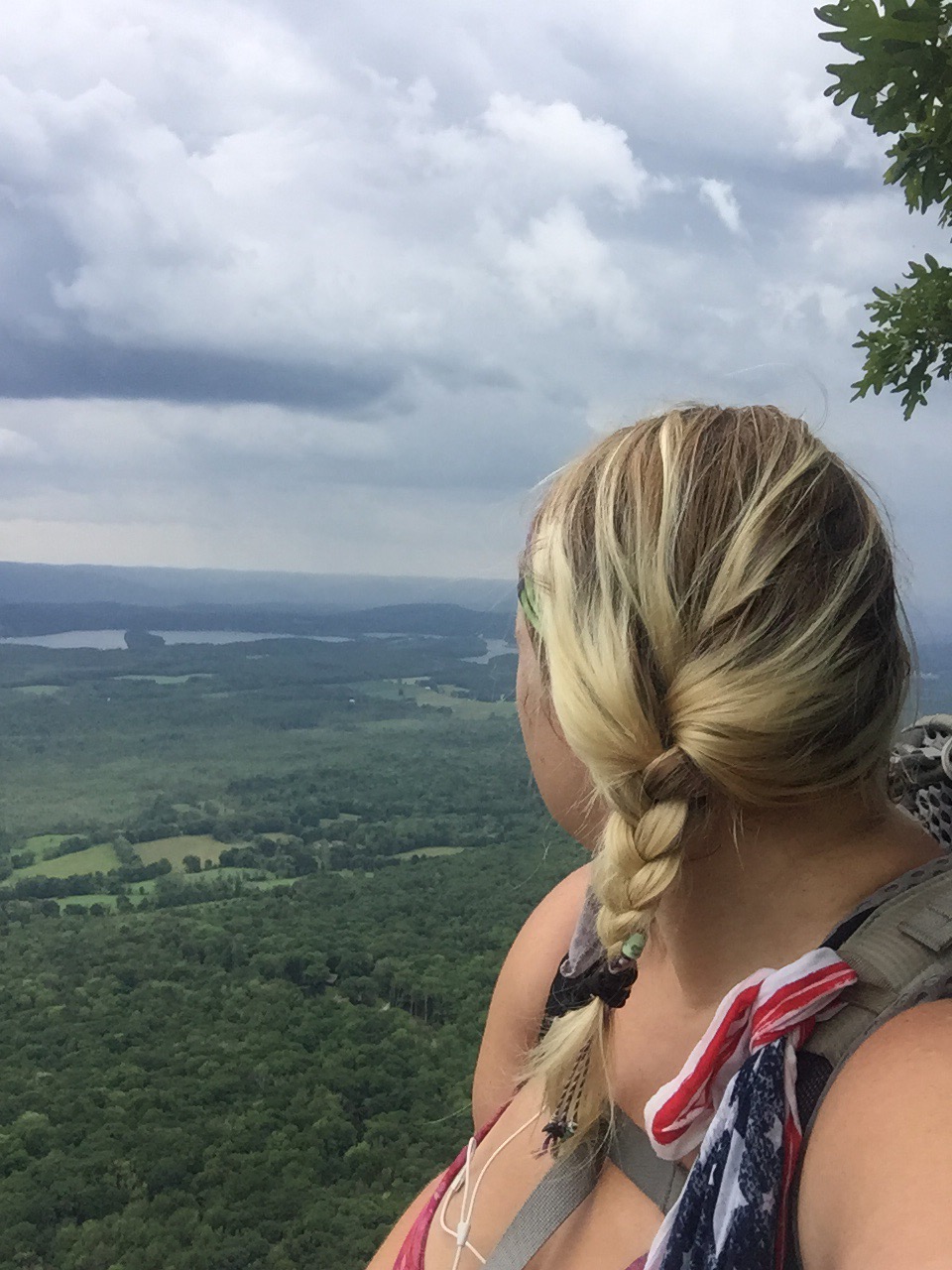 Hike your own hike, dammit

I was surprised at the animosity I experienced surrounding this decision to “leap frog” (at the recommendation of the ATC!). It wasn’t all directed toward me, but the general air of superiority that people get about doing hikes a certain way grinds my nerves. A thru-hike is an experience. It’s not a set number of miles hiked in a continuous line in one specific direction. It’s a life altering journey that must be taken one step at a time, whether or not those steps are chronological or in order, or even if you take all of them. I wish everyone could see that someone else having a different experience than you doesn’t make your hike or theirs any less valid. Stop giving each other grief, congratulate each other on making it this far no matter how far that is, and enjoy your hike the way you want to and need to for it to be fulfilling to you. As for my hike, I’ll be doing it my way. That way is:

I may very well stop at “home” in Franklin since I’ve already hiked most of Georgia this year, and that won’t matter to anyone but me. Hell, I may decide after completing the first SOBO section that it’s good enough to have hiked the whole trail and I don’t NEED to rehike the southern 600 miles that I did last year, and that shouldn’t matter to anyone but me, either. I’m hiking my hike, are you? 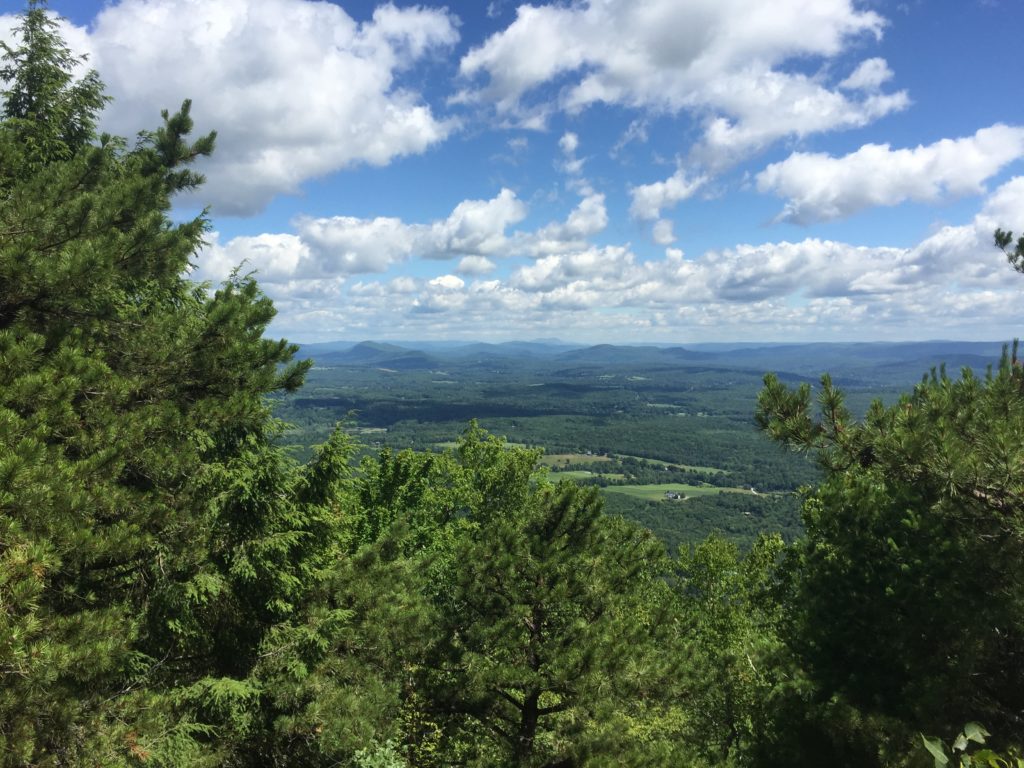 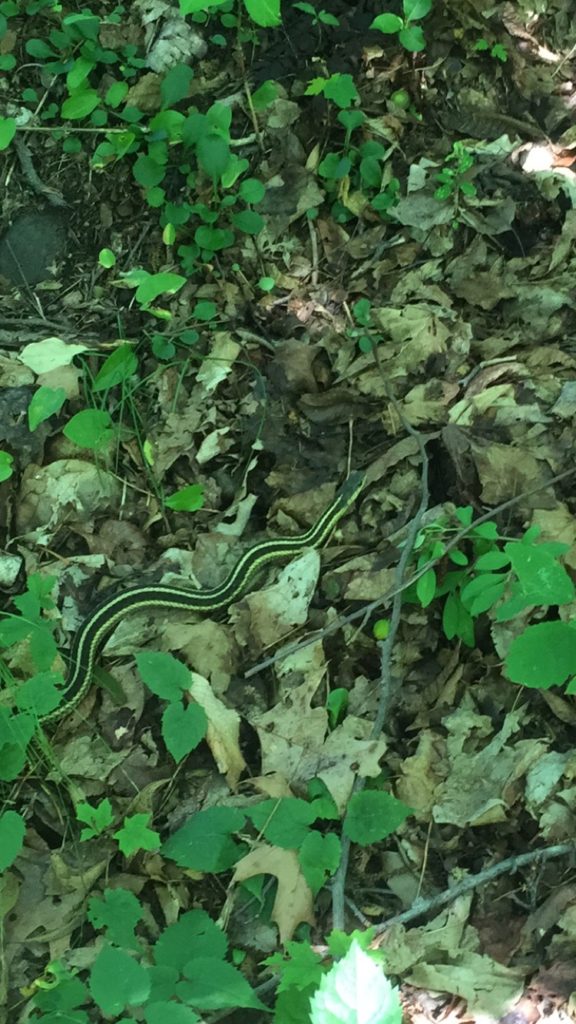 One of three garter snakes I saw on my first day in the north.

I’ll see you guys when I get to Vermont!