My last miles in Maine

I decided to give myself a treat and slack-pack. After a delicious breakfast at the Red Hen, I was driven to the trail head. I hiked up and down Moody Mountain which was extremely steep on the downhill but I felt light as a feather without my pack. I stopped at the shelter for a bite to eat and ran into my one of my old friends Mogley and he sang me a song he’d composed about Maine (there were many rhymes with pain). The trail was very gentle after the shelter and I felt as if I were back in Virginia again. I made it to the road where I was picked up by the hostel. That night I ate a lobster roll to celebrate my last town in Maine. 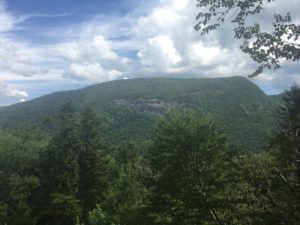 My pack was huge, full of food, and I was intimidated about putting it back on. After another delicious breakfast at the Red Hen I was driven to the trail head. The first few miles were gentle and I was thankful due to my heavy pack. When I approached the peak of Baldplate it became extremely steep with a few ladders, climbs, and slate rock. The views were extraordinary on top. I could see mountains I’d been on the past few days as well as the upcoming mountains with the whites in the background haze. Two boys I’d met (Do Good and Midday) passed me and I could see them as they raced up the next peak on the bare rock. After enjoying the summit I made my way to the campsite half way down the mountain and settled in for the evening. 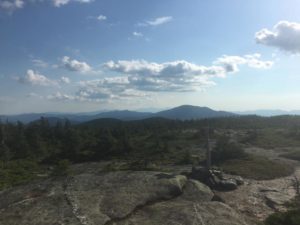 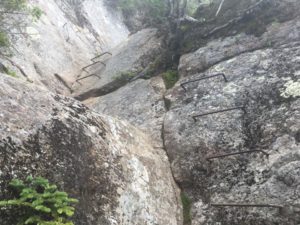 I made it down to Grafton Notch the next morning and procrastinated there for some time to avoid the daunting hill. I was upset about my slow millage and my mood started effecting my hiking. I felt drawn from all strength and after a relatively short millage day that had lasted a long time I got to Speck Pond campsite and called it quits for the day. I was worried about the next day because I’d be entering the hardest mile of the trail and wasn’t feeling very positive. After a good dinner I went to sleep and hoped the next day would be better. 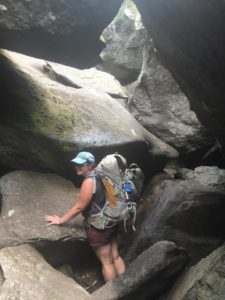 It was drizzling the next day but I woke up on the “right side” of the air mattress. A few people had warned me not to go down the “Arm” in bad weather but it looked as if it would clear up and I wasn’t ready to take a zero in the woods. It was a good call because the sun peaked out after awhile and I found a few blueberries on my way up. I didn’t actually realize when I began my descent of the arm, after awhile of downhill I just figured I was on it. It was steep but not as sketchy as people had warned me. There were many trees and roots on the sides to grab onto (it would have just been terrible to come up). 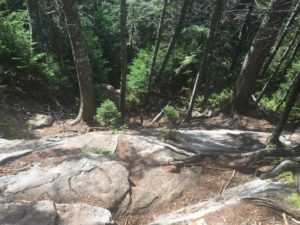 At the bottom there was a stream and I knew that the famous Mahoosuc Notch would follow shortly. It is know as the hardest mile of the AT because you basically have to navigate through a boulder field. Some people love it but I did not. I ate lunch, got water, and then entered the notch. At first it was mostly about foot placement with a few scrambles through boulders. It started to feel errie in this massive field of boulders but then I heard some familiar voices. Do Good and Midday had slept in and after explaining to them my wariness of going through the Notch alone they stuck around with me. I had to take my pack off a few times to drag behind me when going through a squeeze. Afraid to jump I got a foothold from Midday. At one point I was falling and was pulled up a rock by Do Good. I’m pretty sure I could of figured it out on my own (everyone doing the trail does) but I was so thankful for the help. As they say, the trail provides, and it sent me trail angels that day in the form of two boys. When we got out of the Notch I was so relieved I pushed hard to get to the shelter and went to sleep so happy to be done with “that mile”.

It was cool the next morning and I kept walking to keep warm. There were a few throw polls up and climb up (almost as if elementary rock climbing) as well as a few more ladders. Goose Eye was spectacular. I could see a beautiful pond, the Whites, Old Spec, Baldplate, and Old Blue. There was some rebar to go down and after one more hill I was close to the state line. I just had a small Boulder “thing” to climb up. I don’t really know what else to call it so I’ll just describe the “thing” as one last scramble that looked a lot worse than it was. A few minutes later I could hear happy talking and I yelled down to ask if I was at the border. Do Good, Midday, and some NOBOs were hanging out there and I had a candy bar to celebrate my victory of entering New Hampshire. It felt like I was still in Maine as I trudged up the trail to Mount Success and was greeted by a short storm. I got to Gentleman Pond Shelter and decided to stay inside. There were two other boys in there, one a NOBO and the other heading south. We chatted and shared stories of the trail and that night I treated myself to a double Ramen. 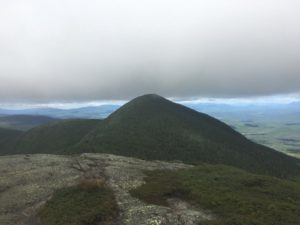 The SOBO for the shelter (Socko) decided he wanted to hike with me the next day so when I was ready to go he spontaneous had his stuff packed and followed me back to the trail. He fell behind me on the uphill but caught up as I ate a candy bar at Dream Lake. Every time I took a break he would catch up and after lunch we hiked together keeping a pretty similar pace. The trail was easy compared with the past couple days and we made good time down the mountain into Gorham. We got some pretty awesome views of Mount Washington and Wildcat during our descent. Paul from the Barn came to pick us up and I was excited to recognize north and south bounders I’d met during my journey. I went and ate a butt load of spaghetti because that was what I was craving and after watching some Olympics I crashed on my comfy bed. 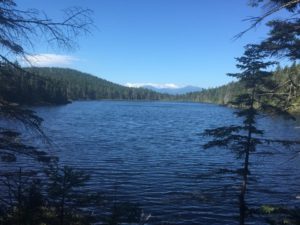 I was told to take a zero before the Whites because most thru hikers think it’s either the second hardest or the hardest section of the trail (Maine being the alternative). Mary Poppins had arrived the night before so we got coffee and cereal. I played some ping pong with Rollin and then headed out for town chores. The outfitter in Gorham doesn’t have a lot so we hitched to Walmart to resupply and try and find some gear (I wanted to try out compression shorts to help relief some issues I’d been having). After getting too much food to carry we hitched to the Chinese buffet which I thought was pretty good and then walked back to the Hostel. Currently I’m chilling and writing this blog. Hopefully I’ll be successfully through the whites in a week or two! 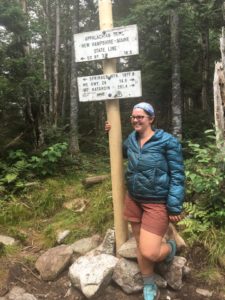