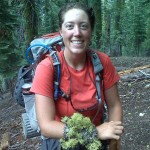 The Jeopardy Question – My Thyroid Story

It was the Spring of 2006 and I was studying geology at Humboldt State University in Arcata, California. I was watching Jeopardy one night and there was a question about the adam’s apple which prompted me to feel around my neck. A look in the mirror had me wondering to myself if my neck looked a little large. I went to the school clinic and they referred me to a local ENT doctor. This small-town doctor did a fine-needle aspiration (FNA) in his office and prescribed synthetic thyroid hormone. I was told that my FNA was clear. Six months later, there was no change in my weight gain, lethargy, and stiff joints. Even walking across campus felt like an enormous challenge.

A family friend and thyroid cancer survivor recommended I see her doctor at UCSF, a twelve hour round trip drive from Arcata. Dr. Greenspan, the inventor of the thyroid as some joke, ordered up an ultrasound-guided FNA. My original FNA sample was too bloody to make any conclusive diagnoses. At UCSF, they biopsied both sides of my neck, confirming that they had enough quality material before ending the procedure. Because of my long distance from San Francisco, Dr. Greenspan called me a couple days later with the diagnosis of papillary and follicular variants of thyroid cancer.

Finally arriving home after being in the hospital for over a week.

Within the week I returned to UCSF, where I waited three hours to meet with a surgeon. A couple weeks later, I survived the five hour thyroidectomy surgery. Suspicious lymph nodes were removed and tested before gluing my neck closed. All clear. Despite presenting low calcium symptoms and taking large quantities of oral calcium, I was released from UCSF. Parathyroid glands sit adjacent to the thyroid and control calcium levels in the body. Not long after arriving back in Arcata, I knew that something was really wrong. I went to the ER as my muscles started to lock into place. Intravenous calcium was my new best friend. I spent nearly a week in the hospital as the small-town staff attempted to balance my mineral levels. The blood tests came like clockwork and my arms slowly turned black and blue. A balance of oral calcium and calcitriol (vitamin D) was finally reached and I was released on my 29th birthday. My parathyroids have since recovered and I no longer have to take massive amounts of calcium.

In January 2007, I started my low-iodine diet (to starve my body of iodine) and a month later I swallowed 150 mci (millicuries) of radioactive iodine (I-131). If there were any remaining thyroid cells, they would be killed when they absorbed the radioactive iodine. The UCSF staff trained me well on how to manage my radioactive home care and I suffered no side effects from the treatment. A week later my full body scan showed good results. The next year was probably the hardest part. The I-131 treatment, having zapped my immune system, meant that I was sick all the time. Illness after illness knocked me down. I started suffering from allergies which I still have to this day. Through all that, I managed to finish my GeoScience degree and teaching credential.

By 2008, I had a real sense of wanting to reclaim my life. The last two years had been a battle. So on the first day of Spring, I started doing my 20 mile commute to work by bicycle. At first I could only ride a few days a week (because my butt hurt so bad) but I slowly gained enough strength to ride every day. I battled rain, wind, sun, sore muscles, nutty motorists and my own mental strength. In my struggle against cancer and the elements of the natural world, my adventure spirit was born.

In April of 2009 I embarked on a 2,650-mile walk along the Pacific Crest Trail (PCT), traveling from Mexico to Canada in five months. Cancer had given me the strength to take that first step and the courage to find out how strong and resilient I was. I was hooked! Unable to push hiking out of my mind, I embarked on my second thru-hike of the PCT in 2013. In 2014 I rode my bicycle for 300 miles down the California coast and in 2015 I hiked 700 miles of the Continental Divide Trail. In 2016, I plan to thru-hike the Appalachian Trail, Grand Canyon and Lowest to Highest Route. Follow along here on Appalachian Trials and my blog Journey Return.

It’s been almost 10 years since I was diagnosed and thyroid cancer has changed my life for the better. I’ve learned about nutrition and now eat organic, nutrient-dense foods. I’ve removed toxic chemicals from my life (like the ingredients in hygiene and cleaning products). I’ve learned that life is short and that we are mere specs in this geologic world. I’ve learned that the human body is capable of far more than the mind realizes. I surround myself with wholesome people (hikers!). I’ve learned to listen and be empathetic. I’ve learned to lust for adventure and the opportunity to physically and mentally push myself. I’ve learned that nothing is more important than the moment in front of you.

Hi! I'm Lion Heart and I love all things hiking. I'll be thru-hiking NoBo on the PCT in 2017. After being diagnosed with thyroid cancer in 2006, I launched a more active lifestyle with a refreshed perspective on Life. I thru-hiked the Pacific Crest Trail in 2009 and 2013. In 2015, I hiked 700 miles of the Continental Divide Trail. When I'm not thru-hiking, I work as a science teacher, perform as a percussionist, and rally for bicycle advocacy. No matter where my footprints fall or my bicycle tires roll, I believe in treading lightly on this planet and honoring my connection to all things.