We all left camp at slightly different times. Myself left at just around 6:00. The breakfast ended at 9:00 so we had about less than three hours to get there. From our campsite to Pinkham Notch Visitor Center was roughly six miles. The trend was downhill but by no means was this an easy descent. In fact, with tired legs and an insatiable appetite, this descent proved to be extremely difficult. The rocks were slick, but we were all tempted to speed down to get to the breakfast. I had a couple close calls where my trekking poles saved me from eating it. I eventually caught up to Margaritaville who, like myself, had not eaten anything in the morning thinking that this descent to breakfast would be quick and effortless. The descent soon flattened out to a much more manageable grade, and we zoomed to the visitor center. We arrived just before 9:00 and checked in with the kitchen staff. They asked if we were thru hikers and after confirming this were invited to eat all of the leftovers. Scambled eggs, bacon, pancakes, sausage, oatmeal, orange juice, cereal, you name it. The whole fridge was practically ours. I really got to demonstrate my eating prowess in front of everyone as they watched me stack bacon like I was preparing a game of jenga. Jackrabbit and Peach Fuzz rolled into the dining hall and were relieved to smell breakfast wafting through the air. We ate all of it. On top of that, I had two craft root beers to wash it all down with. It was clear: we were not hiking anymore miles today.

A hiker named Oz joined us for breakfast, but she was the only one. An hour late, more hikers rolled into the visitor center, but the breakfast was gone. They also were all taking the day to rest. A storm was brewing, and if one were to have hiked on, the Wildcats were there quietly waiting to suck the soul of any tired hiker. It was a good day to rest. We lounged around the dining area and made it home for an hour or so. Oz said she was going to go into Gorham and asked if we all wanted to split a shuttle into town. We gladly accepted this offer. We sprawled around the dining room floor until Ziggy the shuttle driver picked us up. 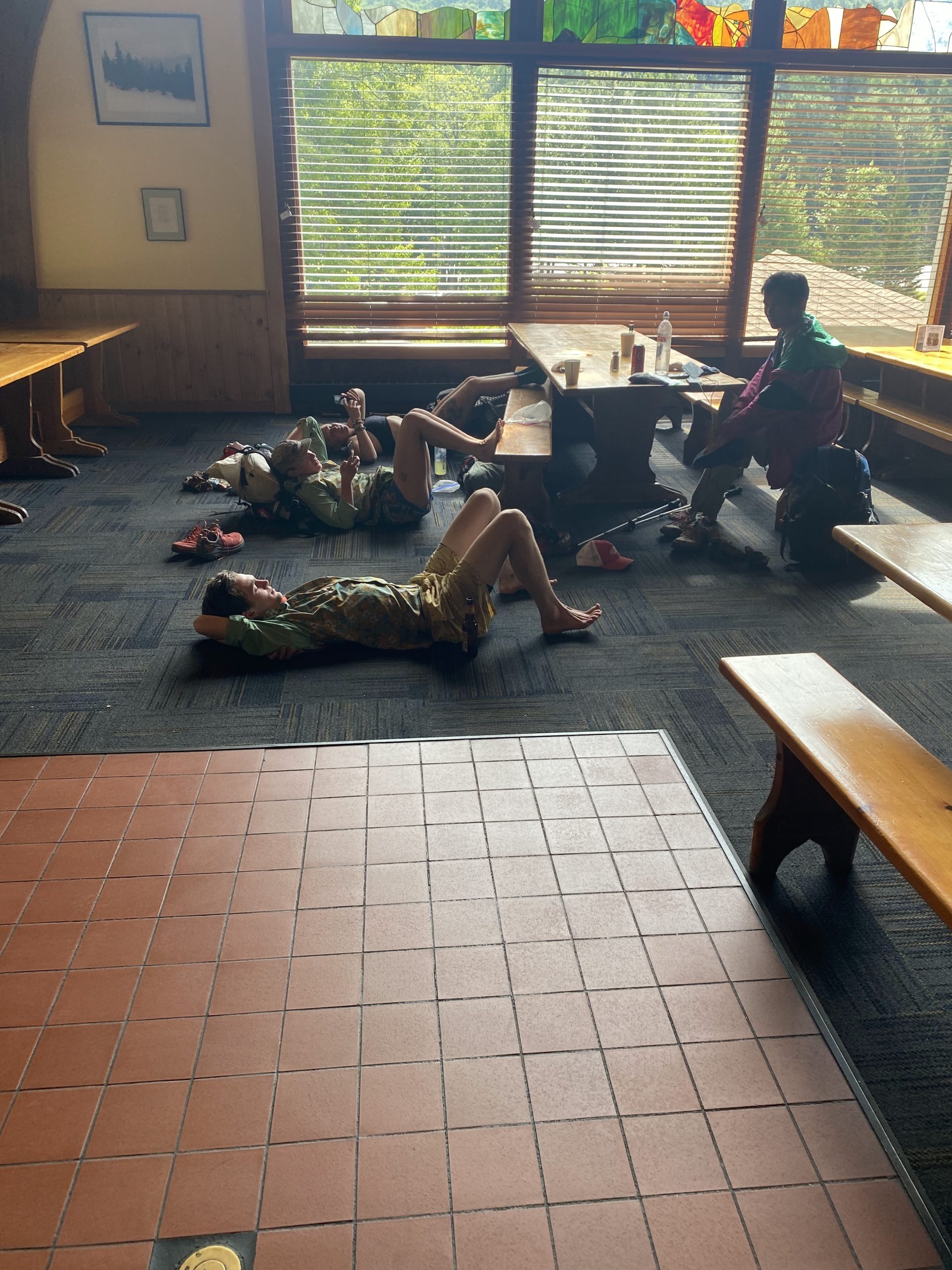 We met Chill Out (in the back) who was flip flopping. We would hike around her the next couple of days.

Ziggy picked us up and dropped us off at Walmart (his rides were very fair. We all paid $5 each). We needed to resupply for the next couple of days, and we were all a tiny bit hungry and wanted some more food. I needed some new shoes, so I went to the shoe department hoping and praying Walmart would have something that could pass off as a hiking shoe. To my disappointment they didn’t. I had not gotten a new pair of shoes since Harpers Ferry, so I had absolutely no tread or really a sole in these Lone Peaks. I instead bought a cheap insole cushion for $14 and prayed that this would get me through at least the end of New Hampshire. I still had no grip, but I thought the insole would at least help cushion my steps slightly. 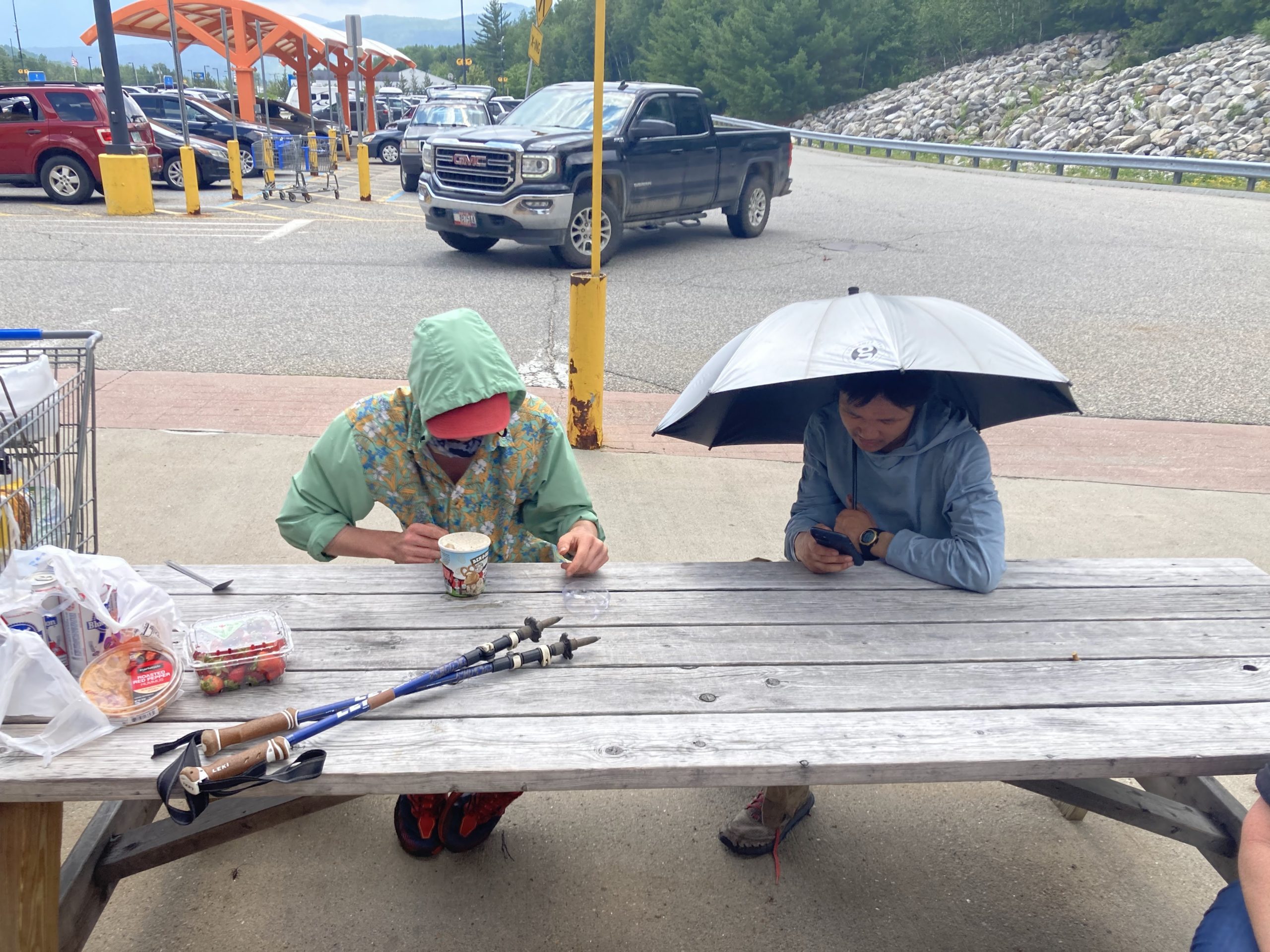 Peach Fuzz and I chilling on the bench outside of Walmart. We were kicked out because we had made our basecamp right next to the shopping carts.

After relaxing at Walmart for close to two hours, Ziggy picked us up again and dropped us back off at the Pinkham Notch Visitor Center. We weren’t sure where we were going to sleep tonight. The Joe Dodge Lodge was much too expensive, but we also didn’t want to go and backtrack to a campsite. Luckily I remembered that the pack room at the visitor center is open 24 hours. There are a bunch of tables, it is well air conditioned, and the visitor center stops monitoring the room after 10. I tossed out the idea that after 10:00, we could just blow up our sleeping pads and sleep there. Everyone was a little hesitant at this idea, but we didn’t really have many options. They all tentatively agreed to this idea. But it was only 3:00 now, and we had hours until hiker midnight. So we decided to make base at the pack room. I bought a whole rotisserie chicken at Walmart and feasted on that and some soda. The other three had bought two pizzas and gorged on that. I think my chicken was better. We continued to be lazy for hours by resting our eyes, engaging in some deep conversations about the trail, or forcing ourselves to shove more calories in our system. When it was close to 8:00, Jackrabbit left the room and returned minutes later. He said he just bought a room at the Joe Dodge Lodge. He wasn’t going to sleep here, and he said there was space for all of us. Margaritaville quickly jumped on this offer while Peach Fuzz and I remained loyal to my idea. Those two went off to sleep and soon after Peach Fuzz relented and said he wanted to sleep in that room. I said I was staying here and that I will see them all in the morning. It was just me. In the pack room. Alone. I blew up my air pad, took out my quilt, and prepared myself to sleep. I was on a small bench that was more than enough for one person. I was extremely comfortable and very tired. There was AC, I didn’t have to worry about any bugs— I was about to have the best night of sleep ever. As I began to close my eyes, the janitor walked in.

“Hey how are you?” he inquired.

“I’m good. You know you can’t sleep in here right?”

“Yeah, I knew that. I was just about to leave.”

Damn it. My plan was crushed. I was definitely not about to leave, nor did I want to, but it was clear he wanted me to go. So I embarrassingly packed up my sleeping pad and quilt, repacked all of my gear that I had left out on the floor (it was so clear I was planning on sleeping here and he knew it), and made my out of the door. Luckily, Jackrabbit told me what room they were all in before they all left, so I stumbled myself to the room. The door was unlocked, thankfully, and everyone was asleep. The light from the hallway illuminated Jackrabbit’s face which in turn woke him up. He looked at me, half asleep and confused, and asked what I was doing. I told him they kicked me out and he went back to sleep. I set up my sleep system again and went to sleep laughing that I thought I could pull that scheme off. I was so close.