The Trail Is Filled with New England Surprises

Having never been to New England before, my hike through Connecticut and Massachusetts was full of surprises.

The trail left New York and entered Connecticut without any signage before reentering New York and eventually back to Connecticut. New York was officially behind me and I had just five states to go! Having never been to New England, this was a real treat for me. The mosquitoes were out in full force and the temperature rising. I soon hiked across the road to Kent, CT. I was surprised to get picked up rather quickly by a nice woman named Marsha. She told me that the people in Kent are either extremely friendly to hikers or not at all. The perfectly manicured homes and landscapes in Kent helped me understand what she meant. It seemed straight out of a postcard.

I stopped at the post office and then enjoyed lunch at a local cafe. Before leaving I stopped for ice cream as it was hot as all hell. On the trail you have to remember to treat yourself! As I was walking out of town, thumb out, not having any luck, a man named Carlos pulled over and gave me a lift back to the trail. He was a big fan of the AT and hoped to hike it with his nine-year-old son when he gets older. Carlos had been following other hikers on YouTube and I gave him my blog and video links. I was having a great time in New England so far!

It was a steep climb out of Kent but it wasn’t as bad as the locals had made it out to be. The trail became flat as it followed a river. The easy miles should have been pleasant but the mosquitoes made it nearly unbearable. The campsite I planned to stop at was crowded with tents and Boy Scouts so I marched on. There were some small islands in the middle of the river and I contemplated wading across and setting up camp on my own private paradise. Then I figured the mosquitoes could still cross the river and annoy me so I marched on and reached a campsite at a higher elevation with fewer bugs. 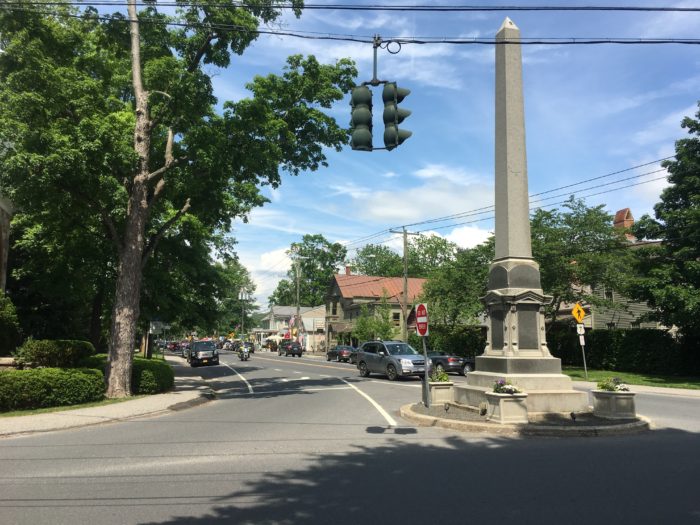 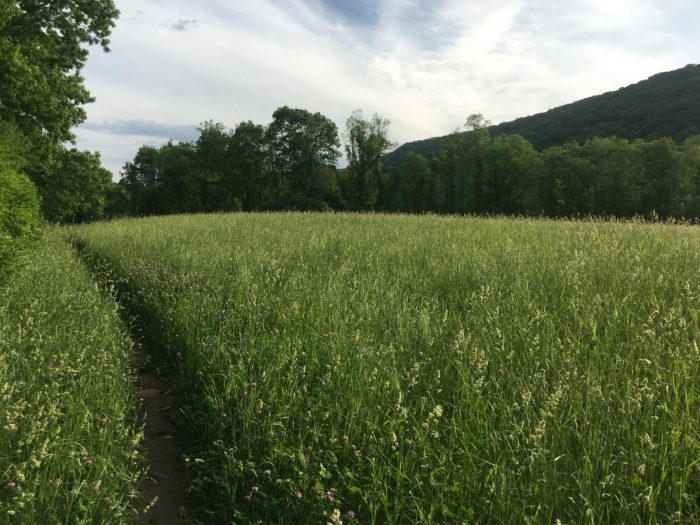 The weather cooled and I was loving it. Lady slippers were blooming and the bugs were gone. The trail took me across babbling brooks, over large rocks and boulders, and past numerous beaver dams. At one point I saw a giant pine tree where the main trunk had died but then two enormous branches had grown out of it and reached for the sky as if they were their own trees. It was as if the dead tree was saying, “Try to kill me; I’ll just come back twice as strong!” Nature is awesome.

I passed farms fields and followed another river before arriving in Falls Village, CT. It was another sleepy New England town with beautiful homes. I started to notice that most of the towns along the AT here are bedroom communities. I had lunch at the Toy Makers Cafe, which was definitely worth the bonus mileage it took to get there. Afterward I hiked past the waterfall and hydroelectric dam, which the town is named after. 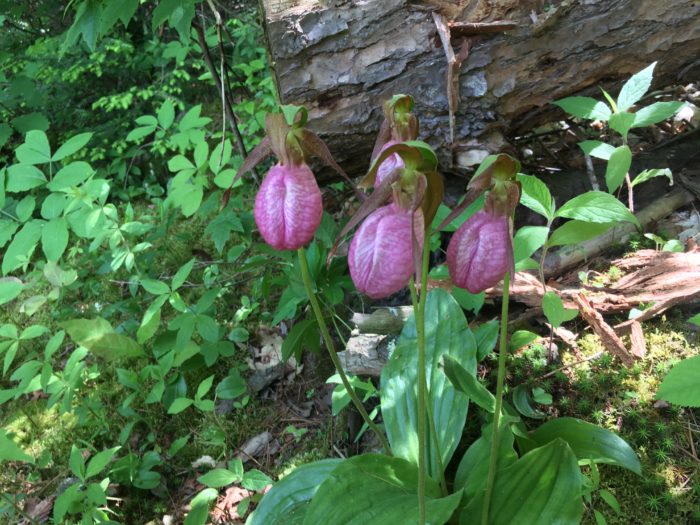 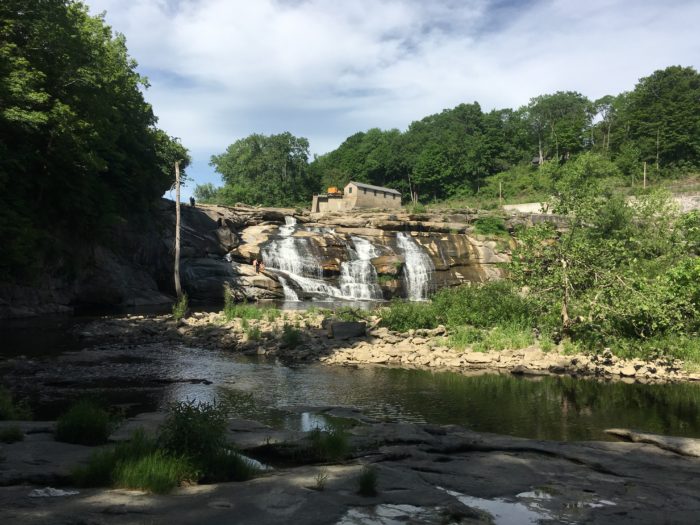 I didn’t have a good idea of where I’d stop for the night. I continued hiking but my knee was giving me pain. I saw on my guide that Salisbury was coming up and I thought maybe a night in a hostel would do my knee some good. I made some calls but no one answered, which was discouraging. As evening approached I received a voicemail from Maria McCabe and she had one bed left in her home! I was surprised and elated to hear back and quickened my pace to arrive before dark.

Upon my arrival I met Maria and several other hikers staying at her home. Maria is a 90-year-old woman from Italy who has been hosting hikers in her home for 18 years. Her stories from her childhood in Italy as well as all the hikers she has met over the years were heartwarming. I felt like I was staying at grandma’s house. I was not expecting to meet such an extraordinary woman who was full of humor, wit, and warmth. Staying at her home was one of the highlights of my hike.

The next morning I had breakfast in the sleepy downtown and hiked on to Bear Mountain. I was told that the mountain is extremely steep and it should not be hiked in wet conditions. Well, it had rained all night but I carried on anyway. Most of the rocks had dried and it wasn’t as steep as made out to be. I guess 1,500 miles on the AT makes most mountains feel easy. The summit rewarded me with a foggy view of nothing. 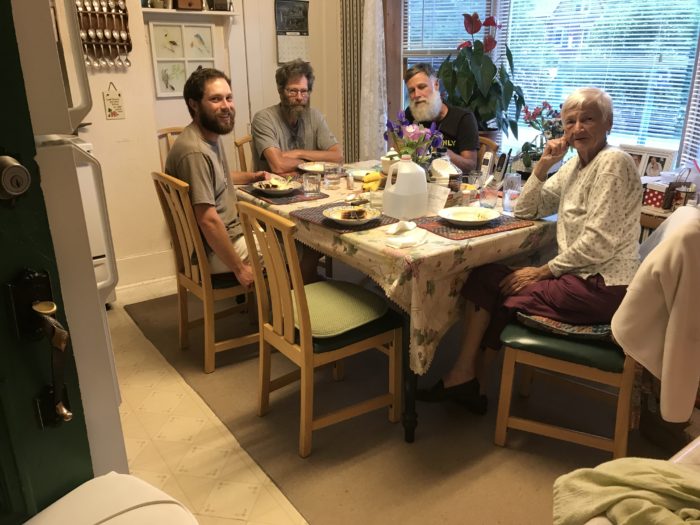 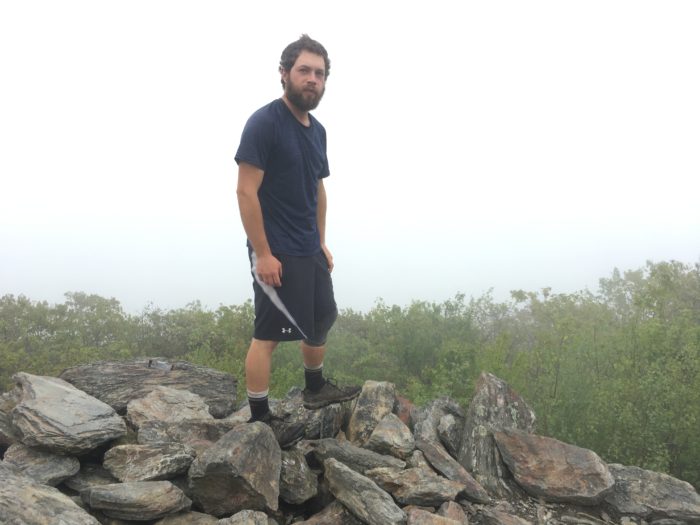 At the bottom of Bear Mountain I crossed into Massachusetts and was now down to four states. The sun burned off the fog and I hiked across beautiful cliffs with the most spectacular views. I felt so lucky to have good weather; it definitely made up for the lack of views on Bear Mountain.

Awhile back when I started the trail there was a man named Fresh Ground who would set up alongside the trail at a road crossing and fix hikers meals. I had heard of him but never encountered him. I met so many hikers that had been fed by him that I was almost irritated I’d missed out on all his glorious trail magic. Well, as I hiked toward a road crossing I noticed a car parked with a table and chairs set up and a few hikers gathered around. I smiled because I knew who it had to be. It was a most welcome surprise to finally meet Fresh Ground and have him cook me the most filling meal.

Full of calories, I continued on into a small rainstorm. I preferred the rain because once it stopped the bugs swarmed me. To make things worse, I unknowingly got turned around and found myself hiking southbound. Who knows how far I’d have gone before realizing my mistake if hadn’t run into a fellow hiker I’d already passed. A little later on I got off trail again as a state park trail was also marked with white blazes (or faint blue blazes; I’m a little colorblind, which probably attributed to my mistake).

The next day I encountered a small farm stand with some snacks for sale. Trail magic was bountiful here in Massachusetts! To make things better, I ran into Fresh Ground for the second day in a row and he cooked me up an amazing lunch. I’d end up running into him again the following day! I go over two-thirds of the trail without seeing him and then I get him three days in a row!

Perhaps the best shelter on the AT is the Upper Goose Pond shelter. I’d heard about unlimited blueberry pancakes being provided for hikers in the mornings. Unfortunately, I had a family friend waiting for me so I didn’t have time to stay the night. But I did hike the extra half-mile off trail to check out the shelter. The pond was amazing and I indulged in a little skinny dipping before continuing on.

The water sources became muddy scarce. I hadn’t been carrying enough water and was starting to get dehydrated. An old man hiked toward me and was a member of a local trail club. After chatting with him briefly he offered me a chilled Gatorade he was carrying with him. It was as if the trail gods were watching over me. 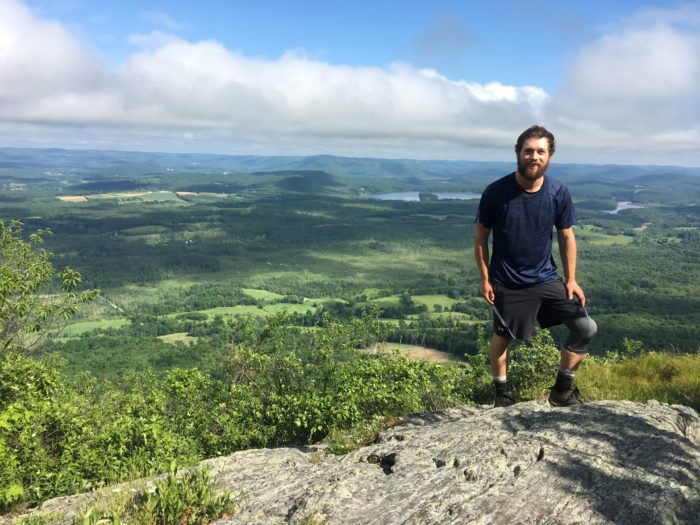 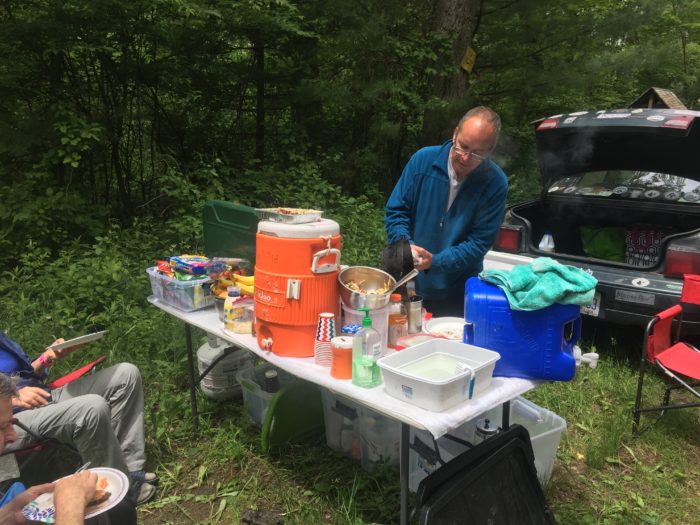 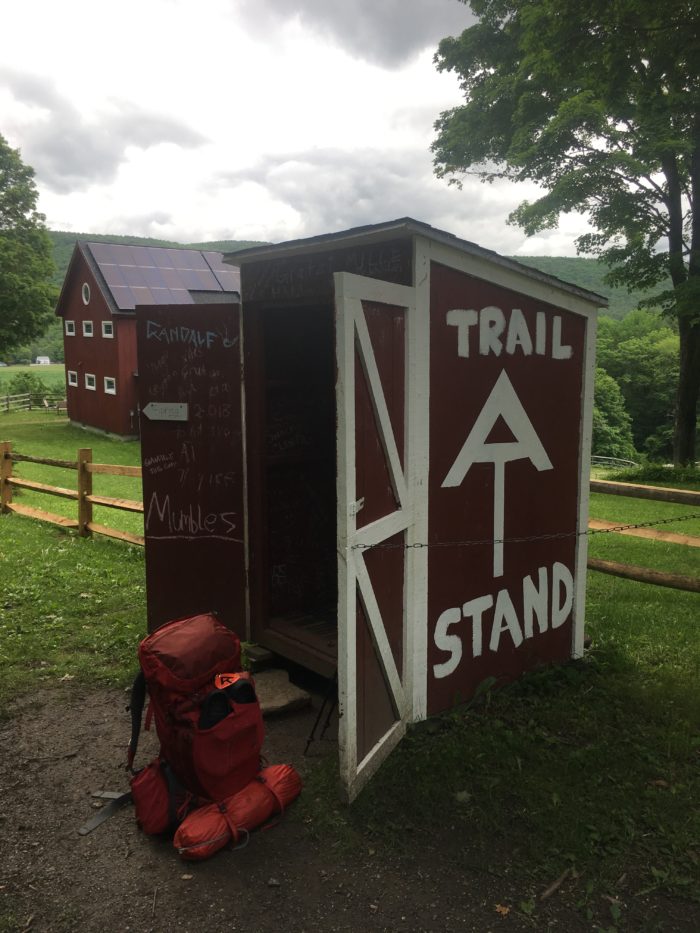 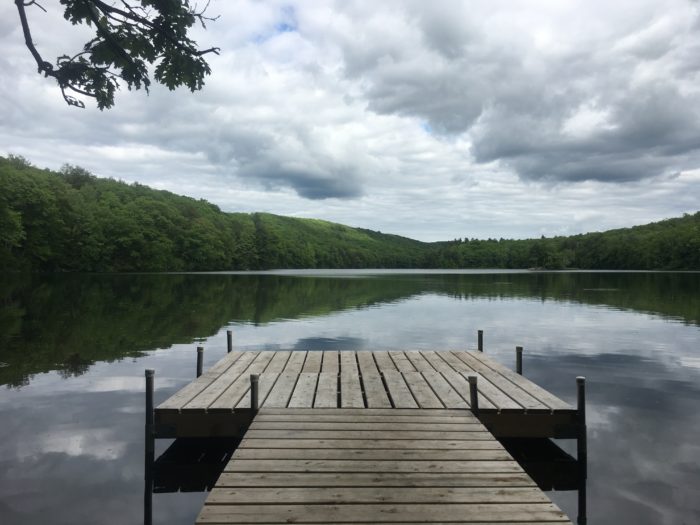 A family friend whom I’d never met had been following my AT blog and lived in Boston. She offered to pick me up from the trail (which is not at all close to Boston) and treat me to a weekend in civilization. So, we arranged to meet up in Dalton, MA, and I suddenly found myself sucked into a whirlwind weekend. It started off with a trip to a brewery followed by a visit to the Harvard campus. And then I was surprised to discover that it was Boston’s pride weekend. We watched the parade, I partied hard at the bars that night with her son and his friends, and then rallied for a Red Sox game the next day. So much for a relaxing couple of zero days. By the time I got back on the trail I was exhausted. 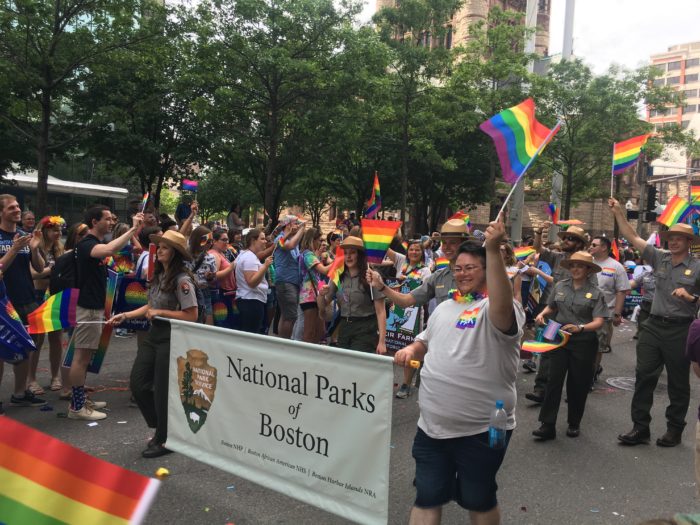 Back on the trail I found myself craving solitude again. Boston was fun but I wanted to be alone with my thoughts and to enjoy the last month on the trail. Katahdin was growing ever closer and I knew the best parts of the trail were ahead. Soon I was ascending Mount Greylock, the highest point in Massachusetts. The views were incredible and I could see the Green Mountains in the distance. Vermont was calling me. 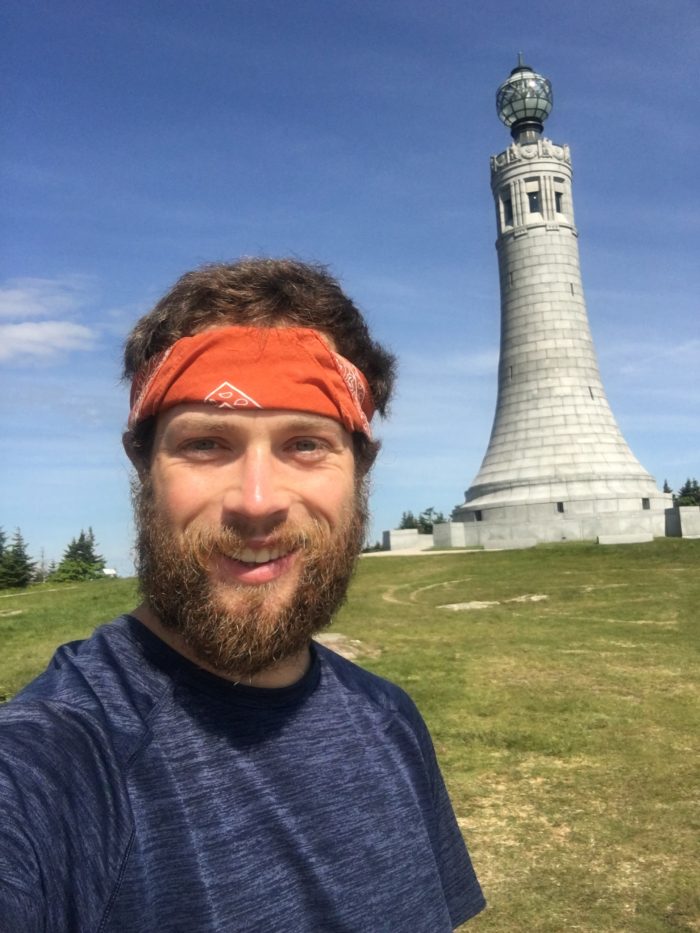