New Hampshire, in All Its Glory 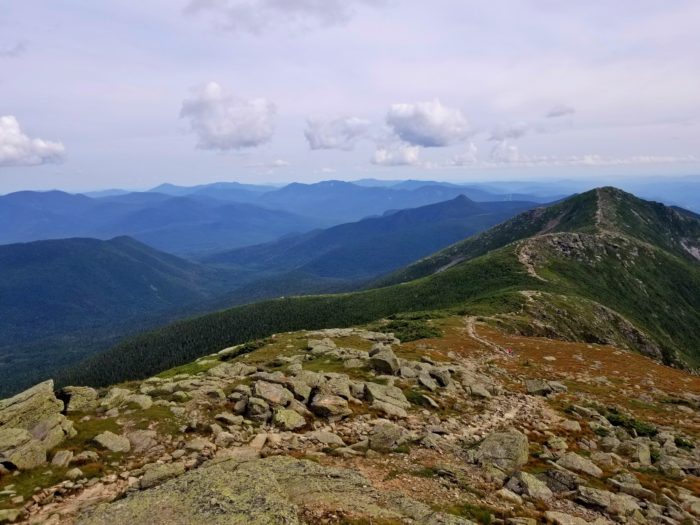 New Hampshire seriously rocked my socks. It also soaked my socks multiple times most days, which was not so pleasant. It took all of 13 days, jam packed with rewarding views, ridge walks, and high elevations. With all good things apparently comes rain, so there was some of that too. There were 160.9 miles to be walked in New Hampshire, and these miles were not easy. In case you missed it – I repeat – they were not easy miles. They are actually known to be the hardest section of the trail. Thankfully, gratifying views came with the hard work. 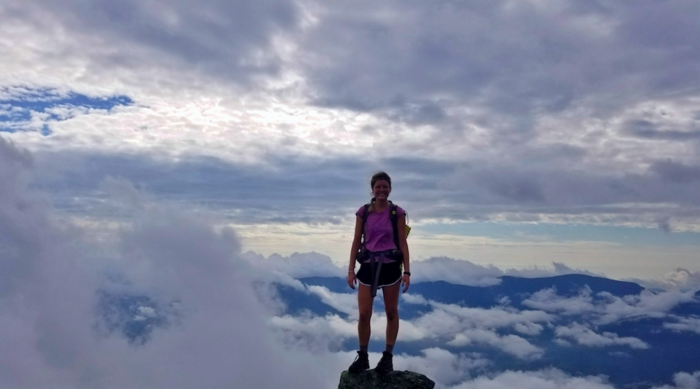 Top of the world feels from Mount Madison.

I remember the day I crossed into New Hampshire. It was raining, muddy, and I’d just summited Mount Success. I’m not sure why I was practically running, since I was already wet and beating the rain was therefore impossible. But I was speeding down this mountain, and before I can slow down I’m in the air, then on my butt, sliding through thick mud. Yay for New Hampshire! I got to the next shelter about 3 p.m. intending to snack, but good try, Jenni. I stayed the night there. I was pretty over walking at that point. 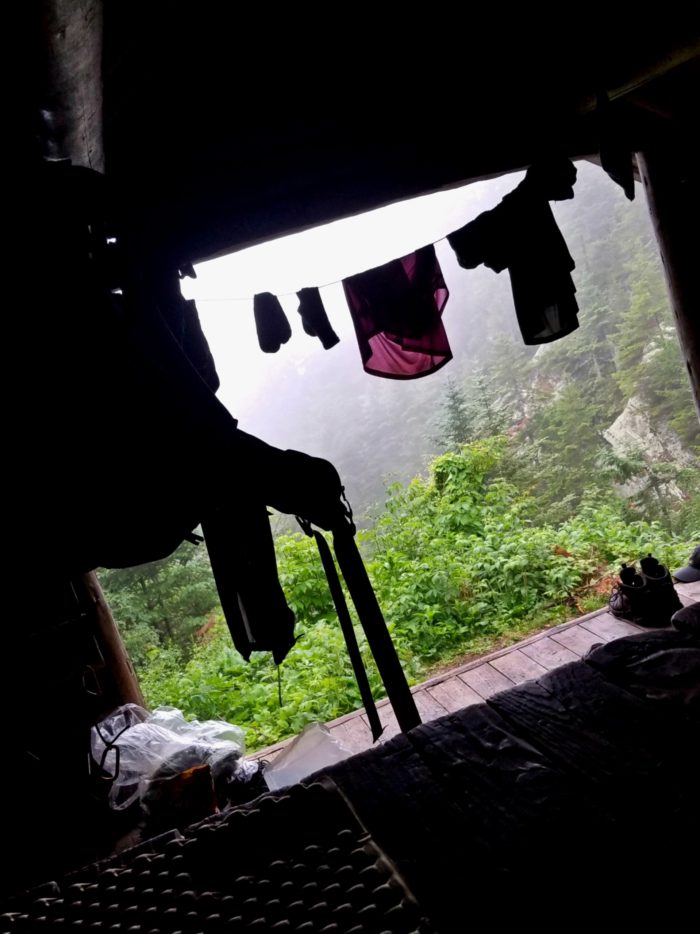 From then on, the state was great to me! A dude named Magellan cooked hot dogs and hamburgers for everyone at Rattle River Hostel – where you only may enter once you’ve showered. I thought they were joking at first, but it really is a brilliant idea and no thru-hiker will ever be offended, trust me. It’s common for hostels to have loaner clothes that hikers wear while all the clothes are in the wash. Very necessary. Didn’t think twice about picking a cozy looking onesie, until it was time to resupply at Walmart. Oops. Leaving the comfort of hostels is hard, but it was time to take on the Whites the next day. This is where the hard part was to start. As if Maine wasn’t hard enough? 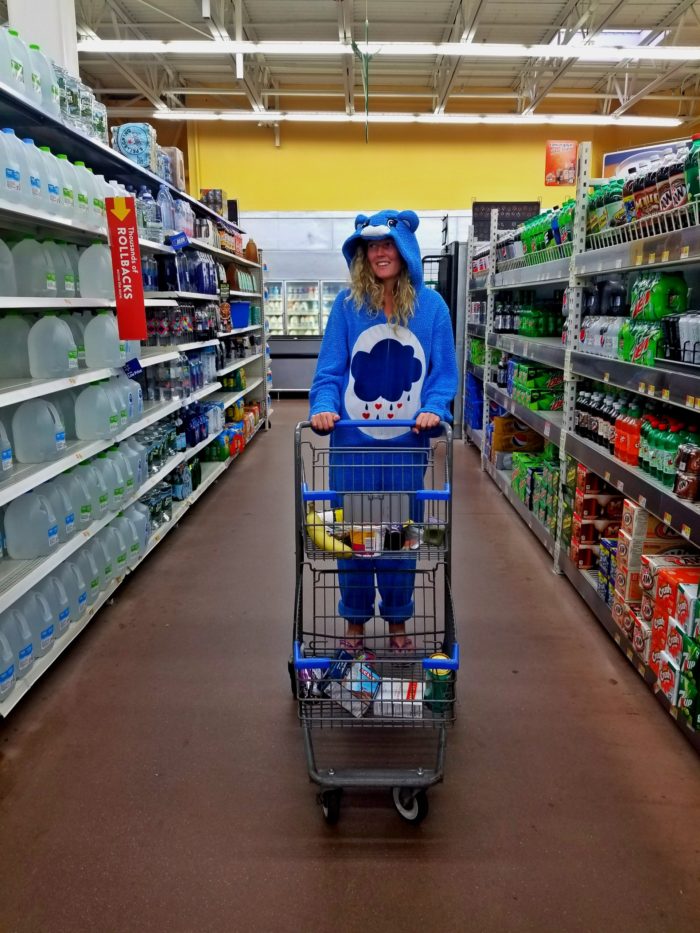 The Whites began with the Wildcats and ended with Moosilauke. Beween the two sections are the Presidentials. Again, it rained in the Wildcats so life was mainly a constant state of white fog. A quick resupply in town turned into a night on a hotel floor that Dreamer and I spent with Sin, Marcus (Impulse???), Tinkerbell, Barefoot, and Green Machine, who we happened to run into on our way out of town. I met them in the 100-Mile Wilderness in Maine, and they are all totally awesome people. It was a cool surprise, and fun catching up. Tinkerbell event painted all our nails, but the Presidentials were waiting so the next day we parted ways, bound to run into each other again I’m sure. 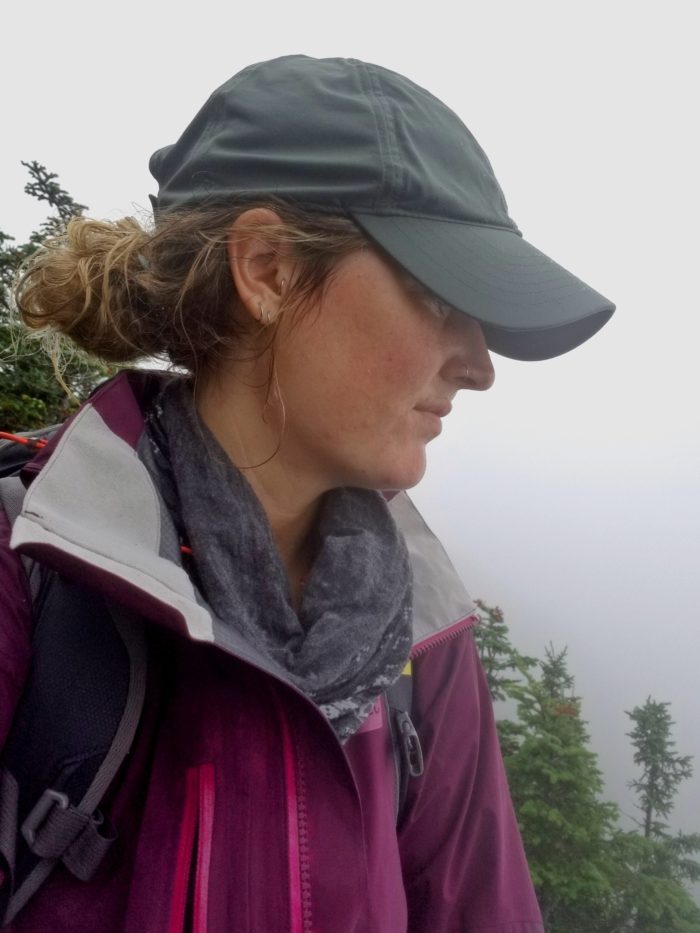 Where are the views I worked so hard for?

Mount Washington is the highest peak in New England, so much of the Presidential range has been optimized for tourists. There are huts spaced out where people can sleep in bunks, as well as purchase hot meals. This was a little piece of heaven for me – as a thru-hiker – because arriving shortly after the guests had breakfast really meant hot coffee and free leftovers! If you’re lucky and arrive when they have odd jobs to be done (after 4 p.m.) thru-hikers can do a work-for-stay. I did one at Mizpah Hut along with Dreamer and a new SOBO called Encino Man. There was one last NOBO whose name I can’t remember, as is the case with most NOBOs you meet in passing. Wiping down kitchen surfaces and mopping the floor was definitely worth the reward of dinner leftovers. Furthermore, we were allowed to sleep on the dining room floor out of the rain once all the paying guests went to bed. The only downside was that us homeless looking people had to be up and packed by 6, so the guests didn’t walk into the room wondering why we were strewn all over their eating area. The food was all worth it, though. Hikers tend to talk about food more than anything else, and think about food when we’re not talking about it. 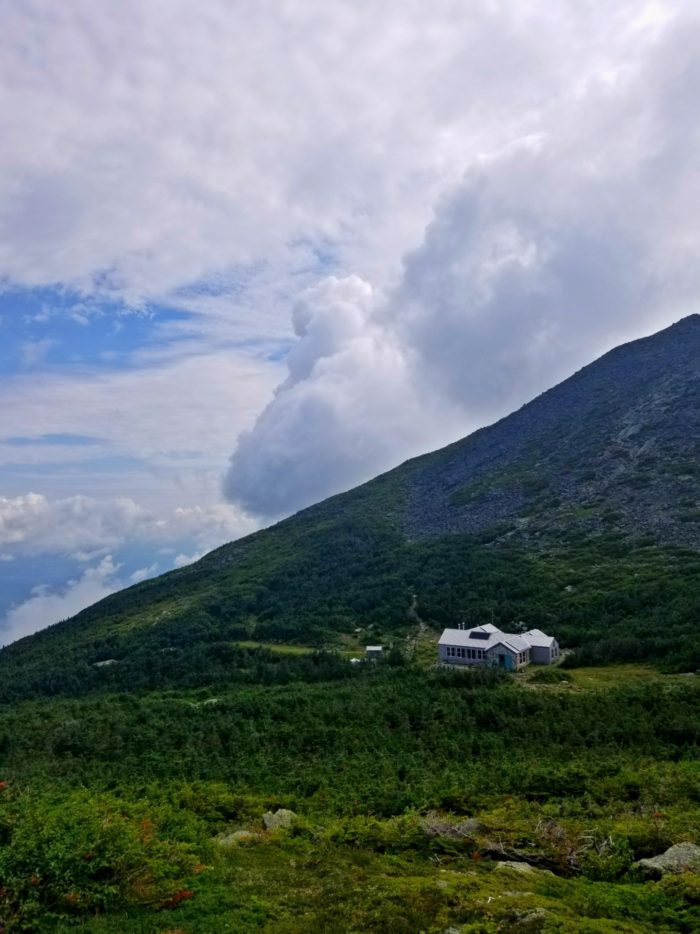 Like who put this building in the wilderness? Madison Hut.

Although the Presidentials cater to tourists, they are no walk in the park. The summit of Washington actually has a paved road leading up to it as well as a train that lugs even more people up and back. When we reached the top it was like a whole new world. People gawked at us like zoo animals, and they were smart to give us space… hiker stench is not a joke. It was the most people I’d seen in one place for a long time, unnerving, really. There are day hikes that intertwine with the AT (Appalachian Trail) as well, and I feel sorry for those who pass us and catch a strong whiff. On the other hand, it’s nice to smell fresh laundry as the day hikers breeze by us.

Mount Washington summit, in all its glory.

The weather for the midsection of the Whites happened to work in our favor. With record winds on Mount Washington being 231 mph, it’s safe to say the nice weather was very much appreciated. You could see the landscape for days. The cool thing about literally hiking for days on end is that you can see where you came from. Mount Garfield and Mount Lafayette were absolutely stunning, as well as Franconia Ridge. The views were breathtaking, and unlike Mount Washington, they weren’t so populated. The reasoning behind the legendary “difficulty” of the Whites comes from excessive elevation changes and extreme ruggedness. Having had no idea what was really coming up, naturally, I believed everyone when they warned me. Really experiencing climbing the ranges had me thinking the hype was fairly exaggerated. The views were mind-blowing, but yes, the climbs weren’t as daunting as they were voiced to be, or so I recall. Maybe I subconsciously blocked out the hard parts by now. 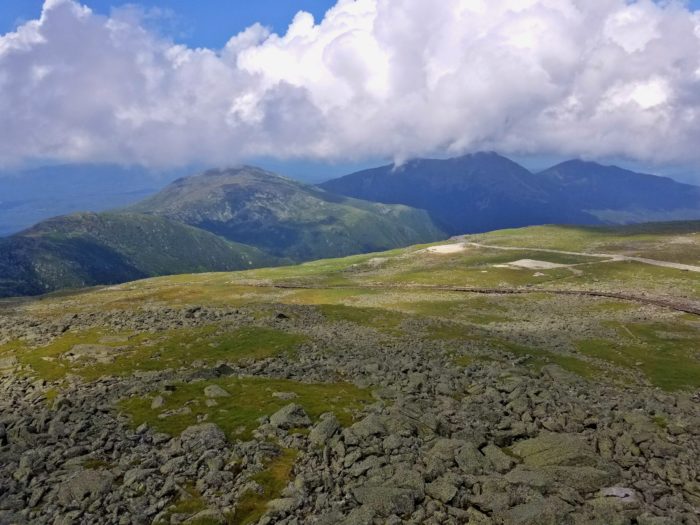 The hard parts are mostly forgotten. They’re buried by memories of scenic views and feelings of gratefulness. Like what the heck ,Dreamer,  you told me we were about to go up a gradual hill. This is not gradual. This is a freaking boulder scramble that goes straight upward. So what if it’s a fraction of an angle less steep than the last mountain, that doesn’t mean it’s going to be easy, man. Sheesh, Dreamer. Then he tells me I’m so kind as to make a nest for the birds in my hair. I must admit I should’ve packed a hairbrush, but I figure that’s Future Jenni’s problem. These are just the little things that are forgotten the moment you see a hummingbird flutter by, or find a patch of fresh blueberries, or finally reach that mountain summit, gradual, steep, whatever. Yes, Dreamer, feel free to continue lying to me about the distance we still have until camp, because I’m on to you. 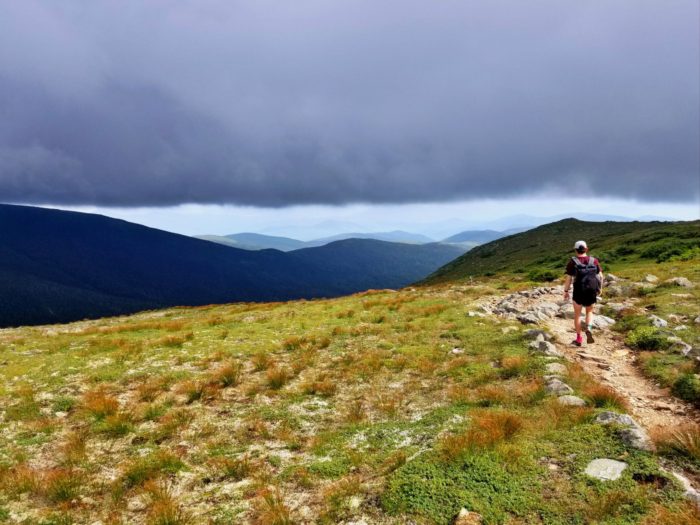 Dreamer and a storm.

Once the last of the Whites were behind us, I felt an immediate urge to push for longer miles. The hardest was over, so automatically it means I could walk farther, right? It was my one-month mark on the trail and mile 400 was within reach if I pushed on to do a 20-mile day. We were sitting in a shelter eating dinner out of the rain and I decided to go for it. 5 p.m., ten miles left, so I booked it. By 9 p.m. I had my headlight on and I was hearing bears in the woods all around me. There probably weren’t any, but as soon as I was alone in the woods at night I sure as heck heard them everywhere. 9:15 came and I hit the 400-mile point! I hadn’t eaten dinner and I was convinced a bear was going to smell the food cooking and eat me, so I went to bed hungry. I stopped immediately when I hit 400 and threw my tent up, halfway on the trail. I woke up alive… and that was when I decided I would never night hike alone again. Happy one month, hahaha! 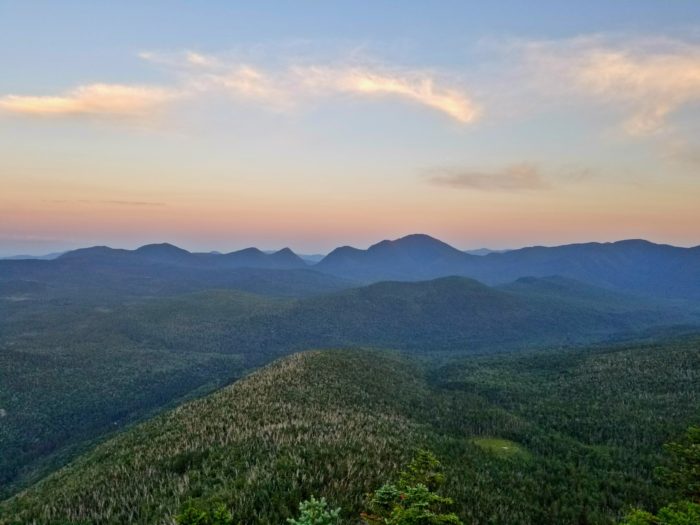 The last three days were consecutive 20+ miles. I’m not sure how my feet survived because I blew out my hiking boots to the point where toes were visible on each foot. RIP Keens, you were good to me. Anyway, like a bum I walked into the last town of New Hampshire, Hanover. Home of Dartmouth. It’s amazing to me how a city with a prestigious school is so hiker friendly. There was a restaurant to stop in and grab a slice of pizza, as well as a bakery that gave doughnuts, both free of charge for thru-hikers. Now that I think about it, it’s probably a strategy to get hikers in and out, preventing an unwelcome aroma. I know I’ve mentioned the stench numerous times, and you may need to really meet a thru-hiker to believe me, but never have I ever smelled a person that’s worse than I have as of recently. 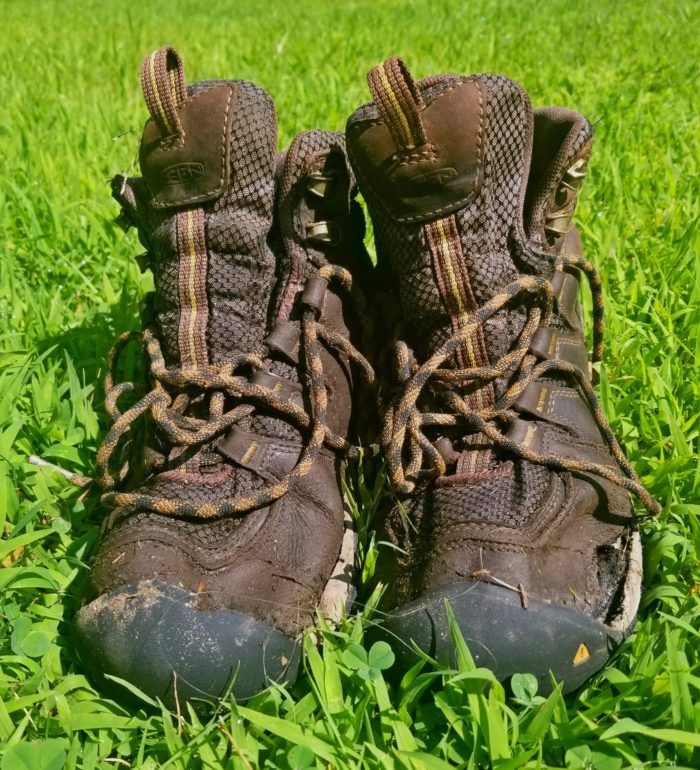 You were good to me.

When I pass a NOBO these days I’m crazy excited for them as they head into New Hampshire. It was a state whose scenery was magnificent, though now is behind me. They’ve so much good stuff to come from where I started. I know it’s going to be a hard state to beat, but I’m curious to see what other states have to offer. I’m also hoping those in towns notice the tent pegs outside my pack, because so long as I have my tent I can argue I am not in fact homeless, but a homeowner nonetheless. 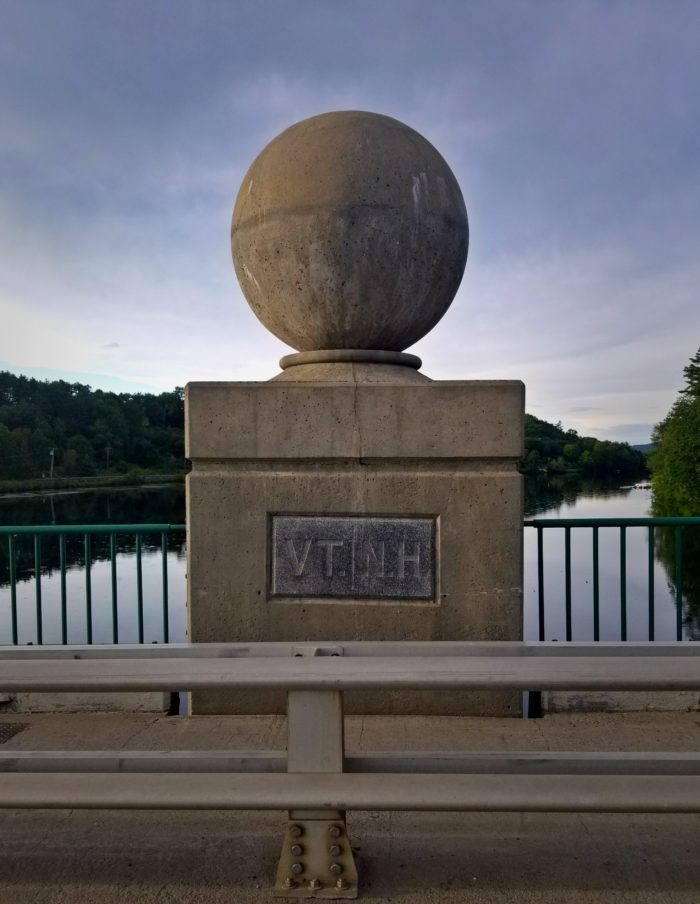 Crossing from Hew Hampshire to Vermont; bring it on!