I had made plans to slack pack with Becky the next day. It looked cloudy and not very promising. We began where I’d left of the other day and the trail was pretty flat and went passed a pond and through a fall colored forest. We arrived at Pinwheel Vista View and stopped to enjoy the spectacular view. The clouds had passed, the sun had come out, and the visibility was so good that we could see High Point. We slowly made our way down the rocky stairway before reaching the road. A little up the road was a farm where we consumed some ice cream and ate french fries. There was a weird atmosphere there so we were glad to get back on the trail. The last part was extremely flat and worn. We finished by walking on a board walk through a wetland. Becky’s dad came to pick us up, I resupplied on the way back, and we enjoyed a delicious steak dinner. I turned in early so I’d be ready for the next day. 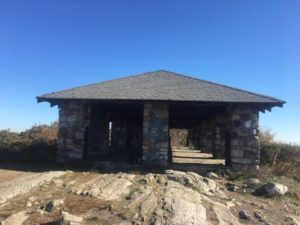 I was dropped off at the trail pretty early the next day. It was foggy and windy out and I couldn’t stop for long without getting chilled. It was mostly flat walking through fields, and one section had really nice benches set up on the side of the trail. I stopped for a lunch break at one of these benches right in time for a mini rain shower. It ended just as I was done eating. I only had a few more miles before I came upon what is known as the secret shelter (Murray Property). A previous thru- hiker owns land close to the trail and built a little cabin (with electric and a shower) for long distance hikers to use for the night. It’s located 5 minutes from the trail in a beautiful field with friendly donkeys nearby. I settled in the cabin (happy that I had four walls to insulate me that night) and cooked a hearty dish of ramen noodles. I skipped the shower but charged my phone and had the whole place to myself that evening. 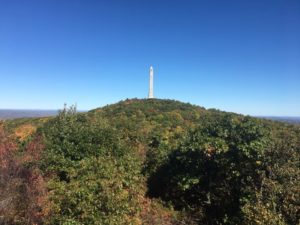 I was warm waking up in the cabin and treated myself to some coffee complements of the accessible well water on the site. The first few miles consisted of flat field walking with a few more rocks in the mix. Close to noon, I accidentally passed High Point monument (it was off the trail) but had a nice view of it from a lookout tower. There I ate lunch and basked in the sun for awhile before hiking another mile to the visitor center. There I received a free soda and a free coffee! But I filled up on water just in case. The last few miles were relatively flat with a scattering of rocks but I made pretty good timing to the shelter. There I was pleasantly surprised by a nice privy, a bear box, and water in the bear box. I made some dinner and some guys showed up in the dark. They made a campfire which I enjoyed for awhile before retreating to my warm sleeping bag. 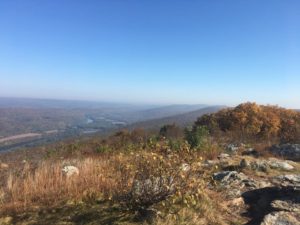 The Ridge was awesome

I was motivated to see my friends the next morning. The walking was pretty nice as it had been the last few days and I found myself at the fire tower before noon. I didn’t want my friends to miss the fantastic view on such a beautiful day so I waited for them to hike two miles up to me. They arrived with wine and goodies to munch on and then we walked together down to the parking lot. We got sandwiches and drove back to Chris and Becky’s, where I showered and started laundry. We headed out for an all you can eat buffet where I met up with more friends and then we drove back to the house. We hung out until late in the evening sharing stories and beverages! 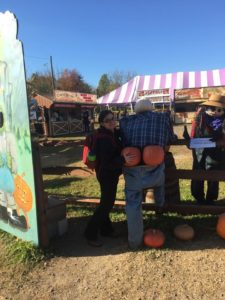 I woke up exhausted from the late night, dreading hiking after a night with friends. We went out for a pleasant breakfast and after plenty of fluids I found the courage to hike. I was dropped off right where I’d left of and climbed up the ridge where there were views of the valleys below. I managed to muster up enough energy to get in a few miles to a place where I could camp and went to sleep as soon as I had set up camp.

I was still recovering from sleep deprivation the next morning as I made my way through the woods wishing I had a lot more caffeine. I moved slow throughout the day catching a nice view of a lake before being interrupted by 50 kids on a school trip. Towards the end of the day the terrain became very rocky and I was surprised when two SOBOs passed me trying to get to Delaware Water Gap that evening. Just afterwards I got a glimpse of Mount Tammany before heading down to the Mahican Outdoor Center. They had a bunk house with two-bunk rooms available and I decided I’d treat myself and catch up on sleep. There were some other folks there (day hikers in for the weekend) and they treated me to a pasta dinner and some interesting conversations. One of the men, Mountain Man Dave, was quite a character. He kept offering me more food and saying really silly things. After lots of pasta and talk, I disappeared to my bunk bed and had a lovely night of sleep.

The following morning Mountain Man Dave made me an egg on toast with cream cheese and cucumbers (good combo). I headed off to meet my Aunt Heidi at Sunfish Pond. I was following Raccoon Ridge and the trail was beautiful. The fall colors were out, it was grassy on top, and I could see Pennsylvania on one side and New Jersey on the other. I arrived at Sunfish pond in all its glory with Heidi already there. We hiked down to the parking lot together- taking in the lovely trail. Once at the parking lot she gave my pack a lift across route 80, and I met her on the other side now: officially in my last state of the trail, Pennsylvania. We had a nice Thai lunch and then I headed over to the church hostel at the Delaware Water Gap. I was surprised to see several SOBOs there and one who just completed a flip flop hike. We hung out for awhile but I felt the need to head to bed so I could be up early the next morning to meet my mother! 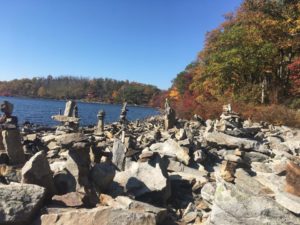 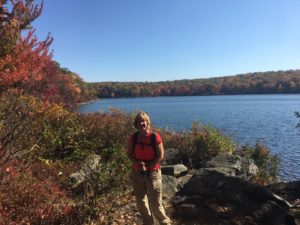 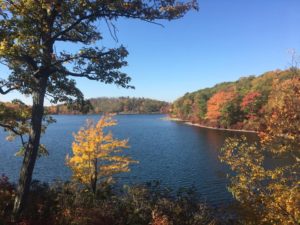 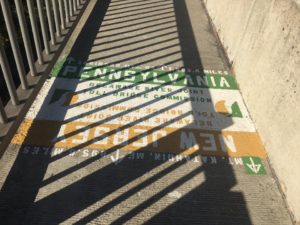 Bridge over Delaware River at the “Gap”…Hello Pennsylvania!