Like so many other native New Yorkers, I live in metropolitan Atlanta, the economic and cultural hub of the American Southeast; in fact, its gateway to the world via Hartsfield-Jackson Airport. Many aspiring northbound thru hikers enter the state of Georgia this way. The Appalachian Trail is about a hundred miles north of the city. Many hikers take the MARTA light rail system to the North Springs station to connect with independent shuttle services. Atlanta, like Washington DC and New York City, occupies a place among the great cities of the world that happen to provide convenient travel services to the Appalachian Trail. Atlanta, for logistical reasons, is likely the most visited by AT thru hikers among the biggest three metropolitan cities that serve the trail. New York City, counter to intuition, is the one that is most like a trail town, insofar as its easy accessibility to the AT.

There are three opportunities for a thru hiker to access New York City from on or near the trail. Heading northbound (coming from New Jersey), the first one is a New Jersey Transit bus that connects Greenwood Lake, New York to the Port Authority Bus Terminal in midtown Manhattan. This is exactly how I traveled to New York City from the trail with a thru hiker named Turnaround in 2011. There are two Metro North commuter train stops with service to New York’s Grand Central Station. One is located in the bucolic town of Pawling, where I squatted legally in Edward R. Morrow Park, shot hoops in the park with local youth, ate a giant ham sandwich in a deli and consecrated my digestion of it with an espresso and pastry at the local cafe– and finished off a biography of Alexander Hamilton. The more well known but limited schedule “Appalachian Trail” stop on the Metro North is the last chance for a NOBO to visit the antithesis of the back country.

Regional buses and trains are cheap to New York– in the neighborhood of twenty dollars or less. For the thru hiker’s budget, the problem is not cheap transportation, but cheap lodging. I have family and friends to stay with in New York. The cost of a bad hotel stay in New York is just not feasible for most hikers. On the other hand, a group of hikers traveling together can get coffee and good sweets and have a jolly good time staying up all night in the city. Some people do sleep in Grand Central Station or Port Authority Bus Terminal– just saying. Why visit New York? Pizza. Pastrami. Pastries. Juniors cheesecake. The hive of people in competition under the relentless artificial light is at once startling and in stark contrast to the lifestyle of any hiker trash that ever walked from Georgia to New York. It’s fun to see all those people and buildings after living in the woods for months. Most of them don’t even stare at filthy hiker trash either. They just think a hiker is another homeless crackpot. 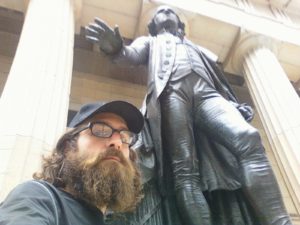 Standing on Bear Mountain Bridge on the Appalachian Trail, West Point is not too far up the Hudson River, where George Washington parked his army– and it’s still there. Down the Hudson River, and sometimes visible through the haze, is New York City, where the aforementioned George Washington was inaugurated the first President of the United States on Wall Street. The Military, political and economic destiny of the USA began along the Hudson, which if you don’t know, is actually a fjord. Here is the lowest point of the Appalachian Trail (only 150′ above sea level). Here is also some of the oldest planned and implemented stretches of the AT.

The best part of visiting New York City as an AT hiker is saying goodbye to it and going back to the relentless ups and downs of trail life. The songs of birds, the sounds of one’s steps on the path, the sound of water falling on stone and the sound of the wind in the trees– simply heaven. While a night in New York to half starved hikers provides a paradise of food choices and over-stimulation, most hikers will feel relieved to be back in the woods once filled up. I wouldn’t trade my sleeping bag for the Waldorf Astoria, but I’d sell the Brooklyn Bridge for a snickers bar.