New York, New York – We Did It Our Way

We finished up New York and crossed into New Jersey yesterday. Of all the states so far, we’ve heard some of the strongest opinions – both positive and negative about the New York trail.

Some of this is warranted in that New York is an exercise in contrasts. It is level and smooth for large sections, but also has some significant climbs. Some of the trail is very rustic and “wild” like Maine. Yet some of the trail is so heavily engineered, you feel you are in Disney World in an AT exhibit.

We liked it all. We were fortunate in that the weather broke, and the temperatures came down. So far at least, it’s only rained at night. No need to hike soaking wet. The bugs also let up a bit, probably because of the cooler temperatures and the afternoon breezes. 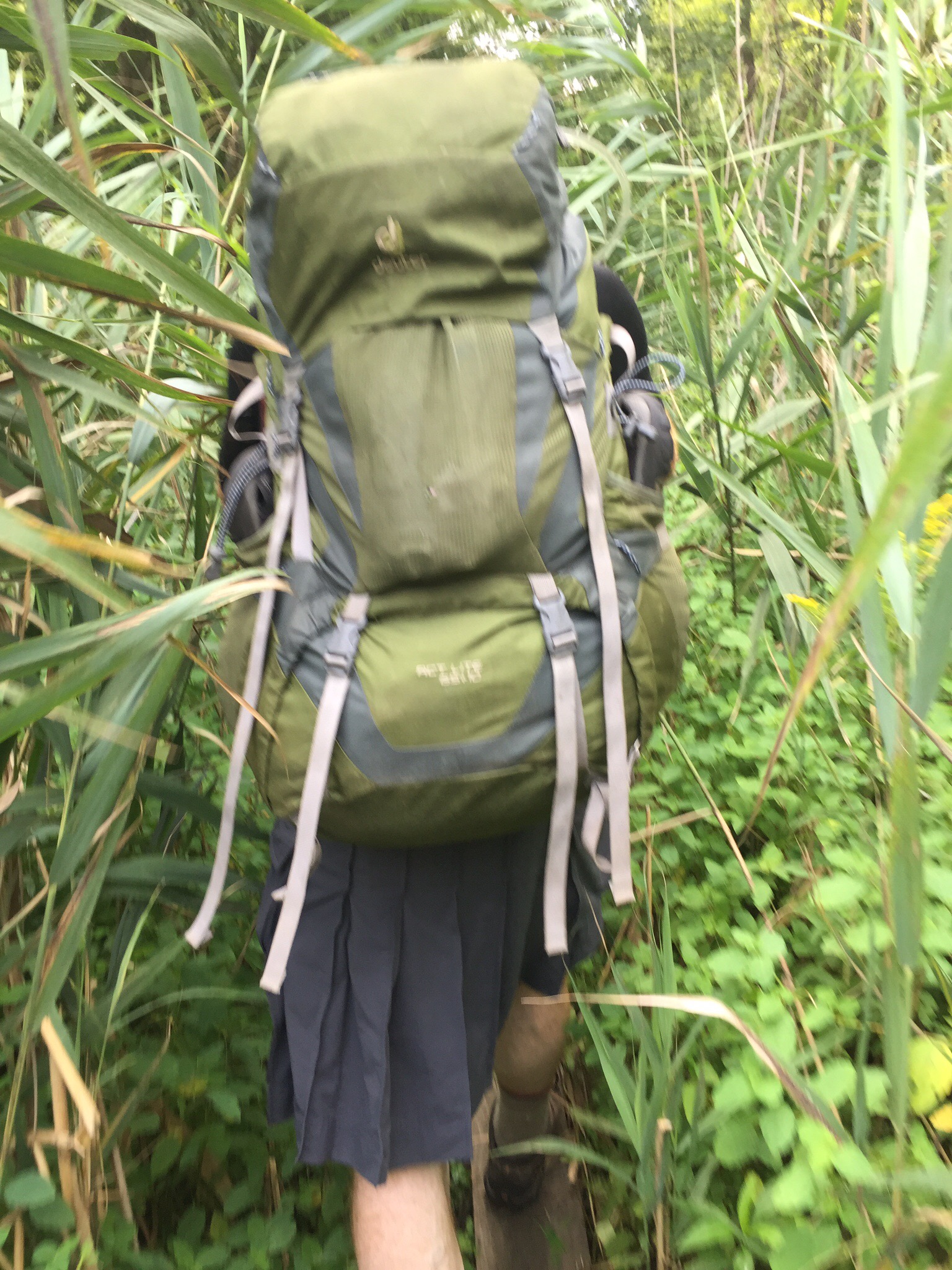 Walking through the tall grass

Our first stop in New York was Pawling. We took the opportunity to ride the train into the city and stay with my son Mark in his Greenwich Village apartment. That was an interesting and enjoyable experience, but I’m glad I don’t live there. 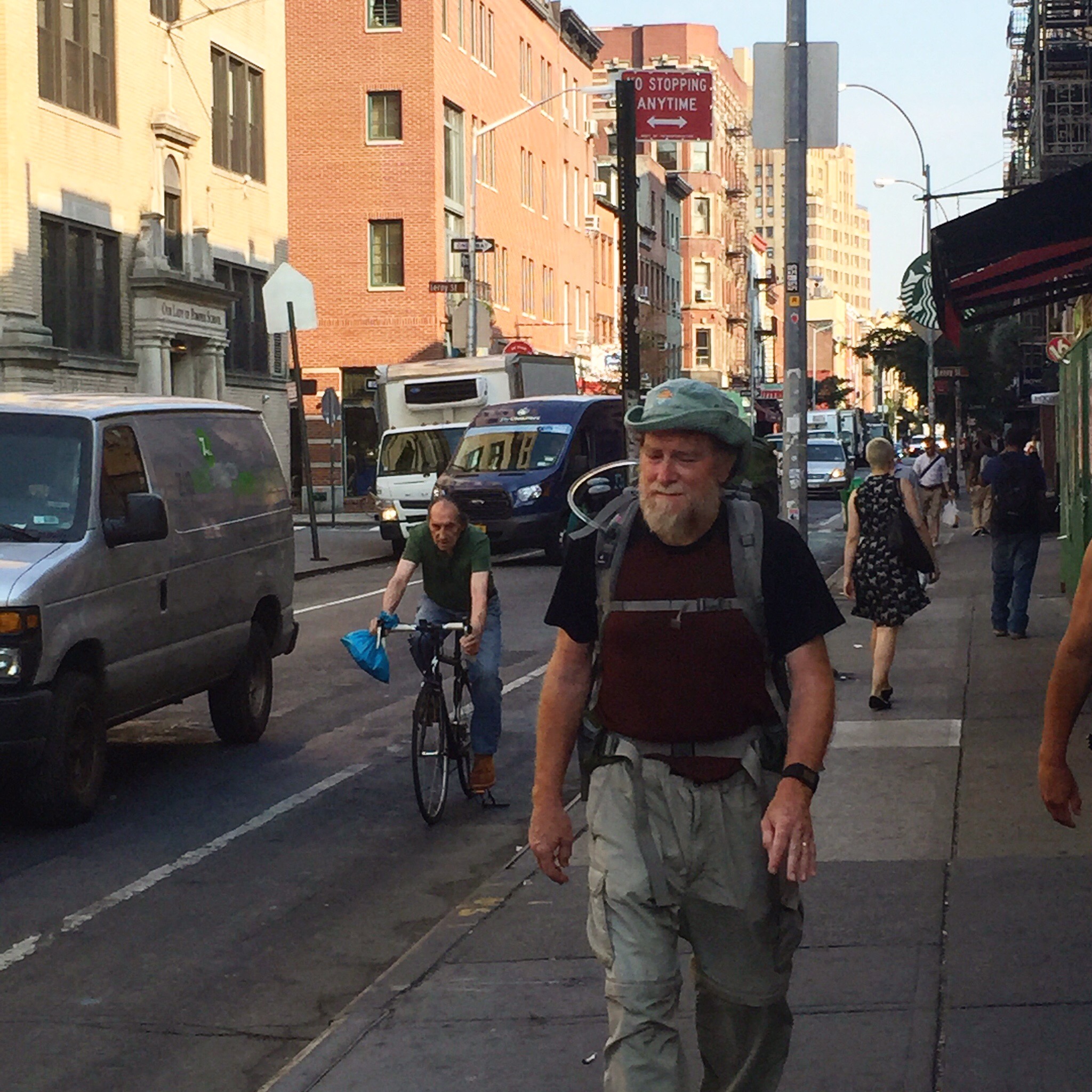 When we got back to Pawling, we went to the Telephone Partners Shelter and learned of several incidents of theft of thru-hiker’s stuff – mainly stoves and food. So we kept an eye on everything that night. We met up with Tennesee Jed and Hobo there.

Then we moved on to the RPH shelter, which is a whole different experience. It’s a cinder block building right on a street. You can order food for delivery – which of course, we did. We ran into Whiskers and Squid there. Squid had hurt his foot and was looking for medical attention. We found an urgent care clinic and one of the volunteers that take care of the shelter helped him find a ride.

The next night, we stayed at a Franciscan Monastery. Not in the monastery itself but at the picnic pavilion at their ball field, which also had a water spigot and a shower. This also allowed for pizza delivery. It rained hard that night and it was good to be in the pavilion- even if the floor got a little wet. 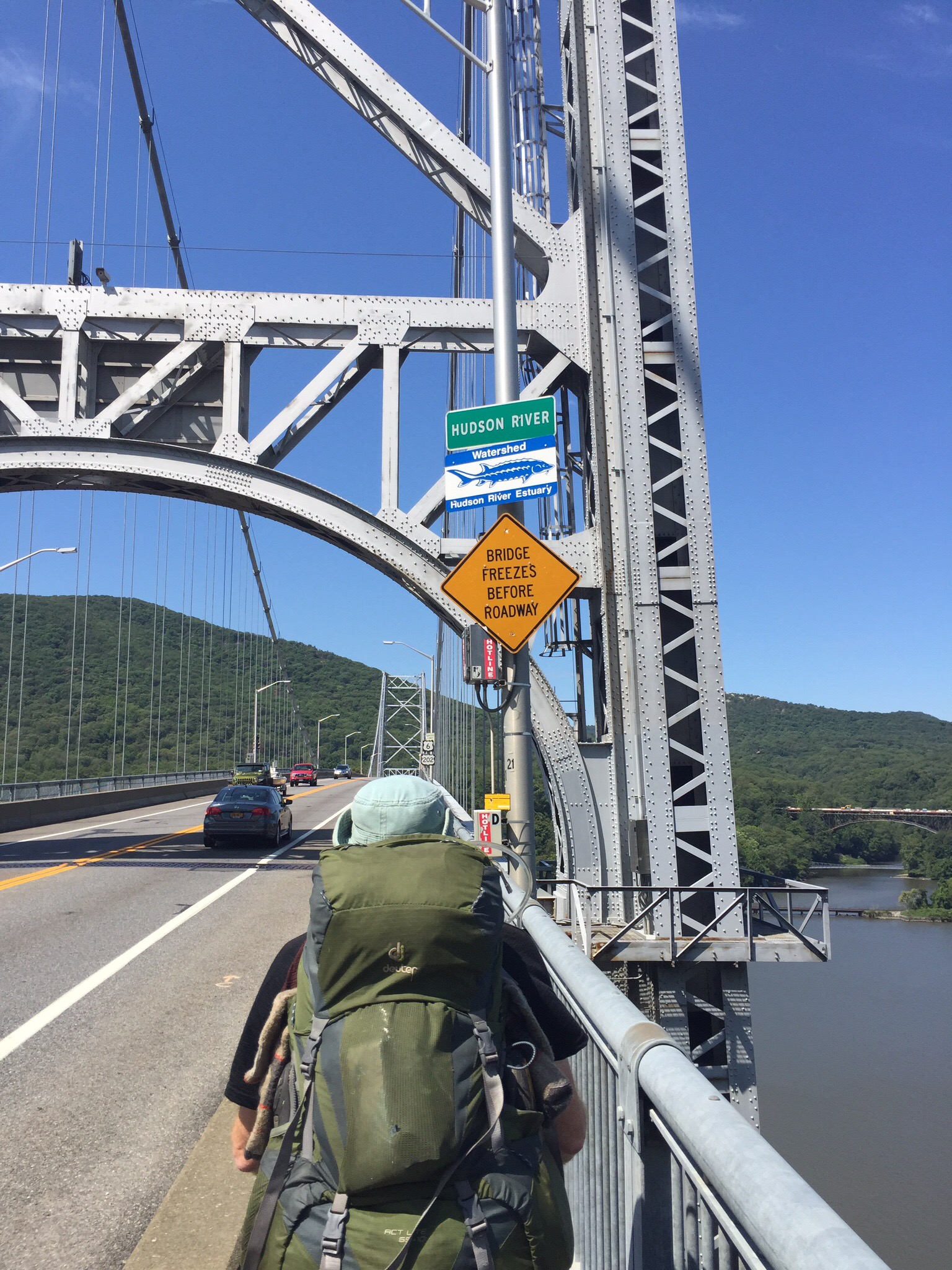 After crossing the Hudson the next morning, we hit Bear Mountain and some of the most beautifully engineered trail I’ve ever seen. We ascended the mountain on rock steps, and the rock work was exquisite. Some might object that this is not in keeping with the natural environment and wild nature of the AT, but then Bear Mountain is close to NYC and gets huge crowds, including the elderly and very young children. I think it’s important to remember that everyplace cannot be Katahdin. You need to enjoy each area for its own character. 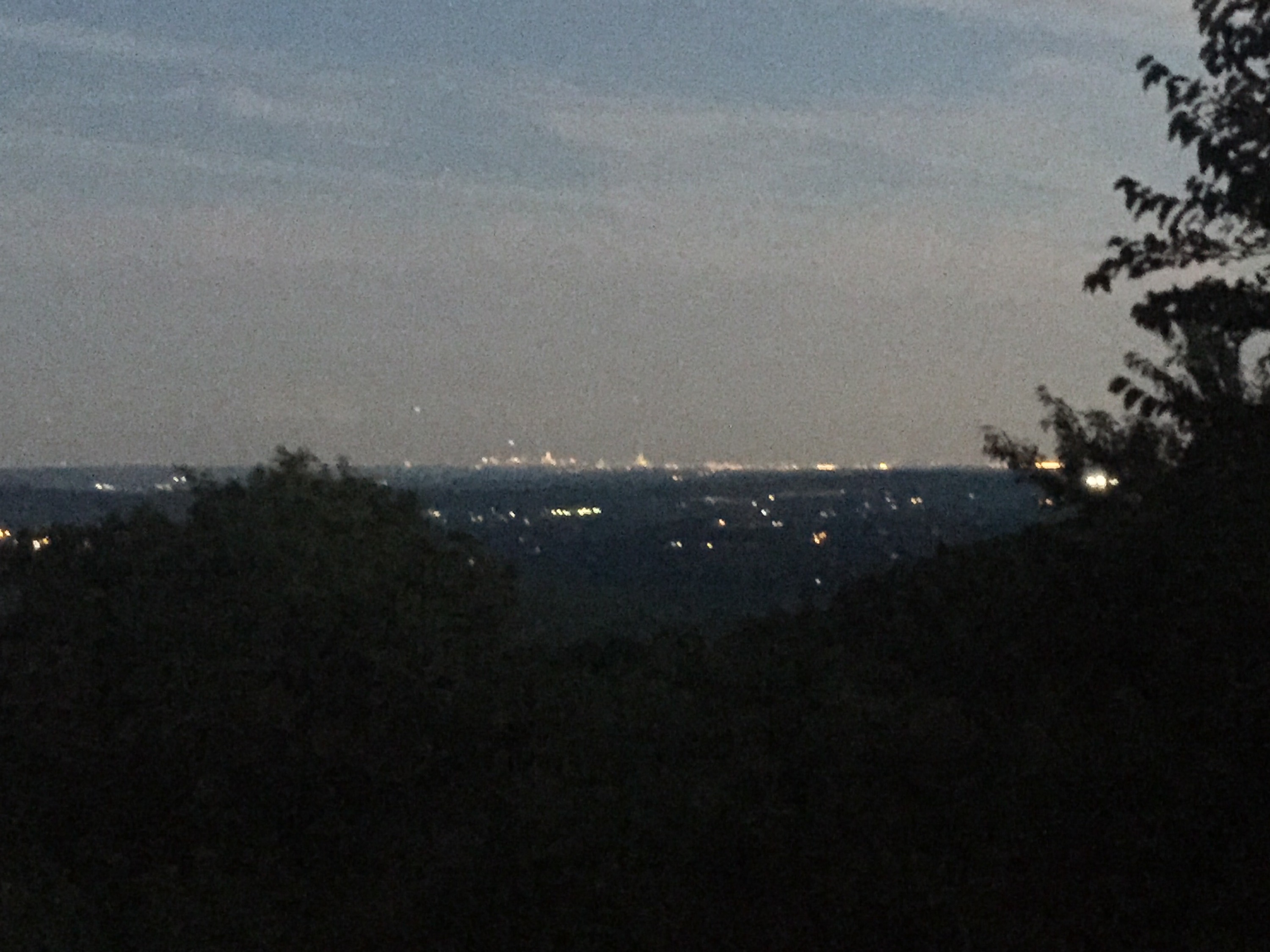 That night we stayed at West Mountain Shelter and enjoyed the view of the NYC skyline. In the morning (Saturday). We walked a mile down to the Visitors Center on the Palisades Parkway and met up with Linda. We spent Saturday and Sunday morning with her and explored Bear Mountain and Fort Montgomery. Being the weekend, it seemed that half of the city was there with us. 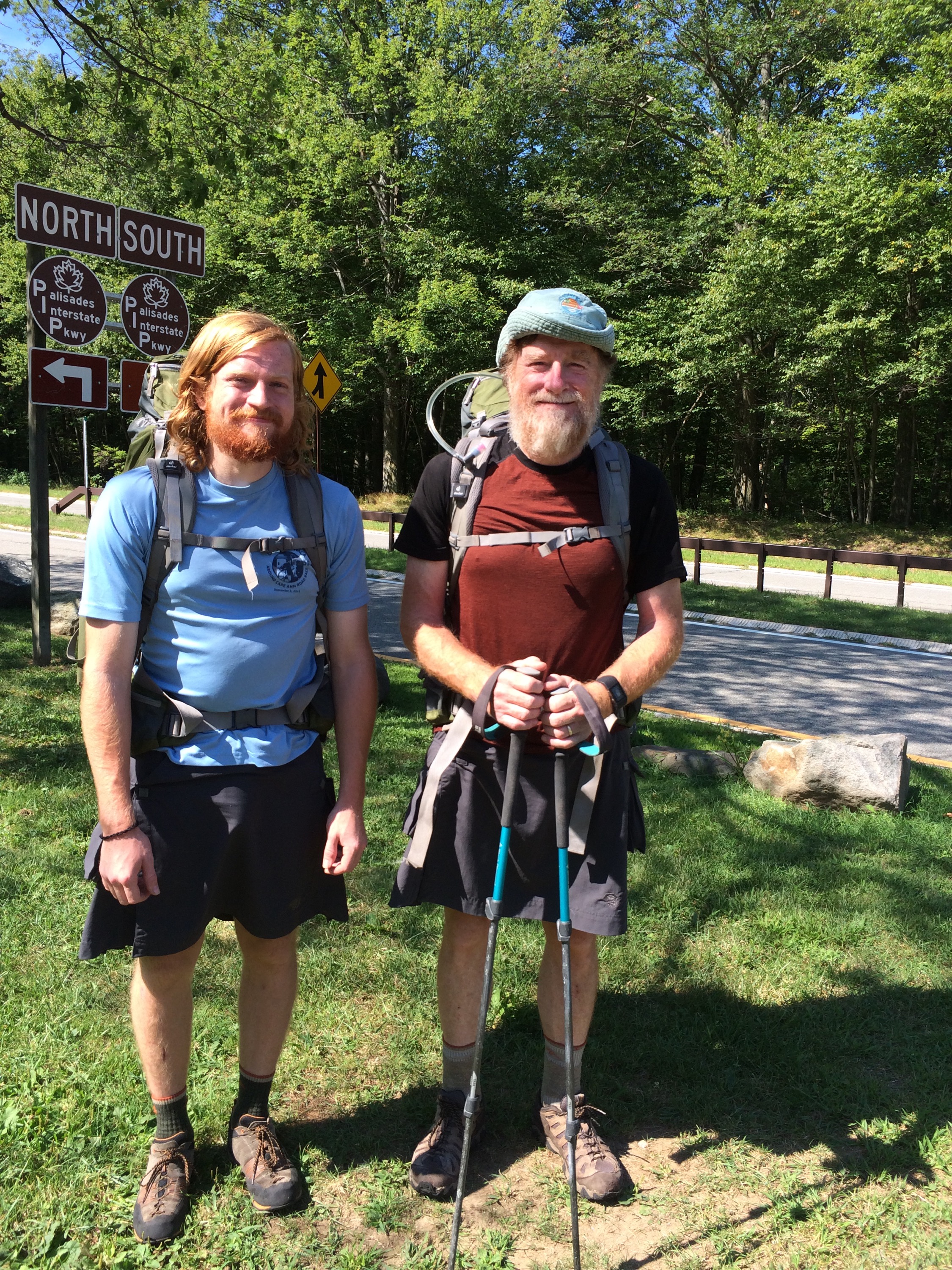 Back to the trail after our day off

There is some interesting Revolutionary War history here in that a battle was fought and lost over Forts Clinton and Montgomery. However the larger strategic objective was met in that British reinforcements did not reach Saratoga on time and the British were defeated there. This kept New England from being isolated from the rest of the colonies. It is seen as a critical turning point. The most remarkable thing learned was that there were a lot of loyal colonists that fought with the British. We often hear how the Civil War often pitted brother against brother, but the Revolutionary War did the same – particularly in New York.

The next night we hit Fingerboard Shelter after a short 7-mile day. Then Wildcat Shelter. Fingerboard had no water. Wildcat had a small spring.

The last day was the toughest in New York. The trail goes over a series of rocky ridges – not unlike souther Massachusetts. It was slow going for a while. 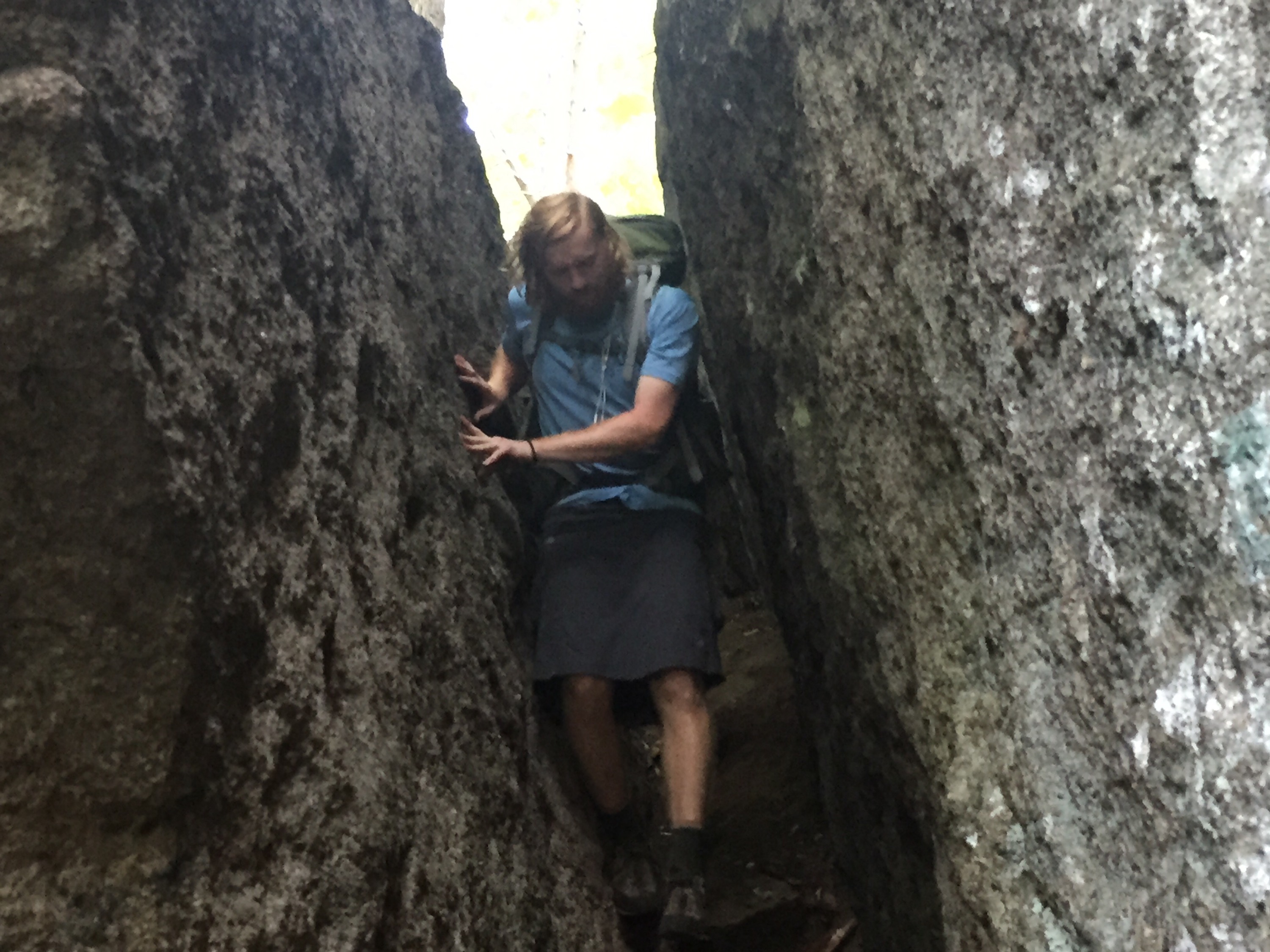 About the only complaint I could make about New York is the lack of water in August. But even here it has been a state full of contrasts. Some shelters like Fingerboard and West Mountsin have no water. Others have wells and pumps that provide delicious and cold water. So far we have been able to plan around the water issues.

We also had our first bear encounter. Not the one in the zoo, this was in Pawling. We were crossing a field of waist high grass, and I saw this rustling along the trail about 100 feet or so in front of me. I stopped. The rustling stopped. A bear head pops up over the grass. I looked at it. It looked at me. Then it turned around and hustled away. No time for pictures, but a definite adrenaline rush.

Finally, it is clear we are in a highly populated area and you are often hearing traffic noise. Again, it should be expected with almost 20 million people living 50 miles to the south.