I woke early, determined to do 21-22 miles and position myself for a resupply the following day. Hobble-It began hiking as I finished breakfast. I checked in with Serendipity and Sonic, then got on trail myself. A couple road crossings in I accidentally got on a different trail and saw a large owl high up in a tree. The mile of extra walking put me behind the others, but gave me a chance to chat with each of them as I passed.

My energy level was high and my pack felt light with only a day of food. I went by a pond edged with Lilly pads and large white flowers. It was very humid so I drank more water than expected going up and down steep rocky terrain. Luckily there was a water cache at the NY17 road crossing and I got a couple liters. I made a second bottle of electrolytes. 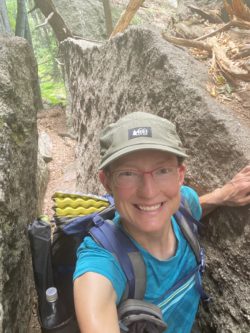 Eventually I reached the Lemon Squeezer, a famous feature on one of the oldest trail sections. It involved a crack in the rock that I edged through sideways followed by a brief climb that I managed with my pack. I stopped for lunch on a large flat boulder. The mix of grass, trees, and rocks reminded me of Flagstaff Peak in Colorado. The terrain continued until I took a side road to a lakeside picnic area. While I got water and used the restroom, Sonic caught up. We discussed where to camp that night.

Serendipity got off trail to spend the evening with friends. I found a nice campsite on the side of Black Mountain. Hobble-It joined me while Sonic stopped at the prior shelter. We ate dinner on a slab of rock with a view across treetops. It was a wearying day.

In the middle of the night I woke to what sounded like a bear crashing through the woods. I turned on my headlamp, but saw nothing. Then at 4:15 am I heard a galloping sound. A deer went past the foot of my tent and collided with Hobble-It’s hammock. Luckily she and the hammock were not injured as she swung up and then down onto the creature’s back. She was quite surprised and I imagine the deer was also. We talked excitedly for ten minutes then managed to fall back asleep. 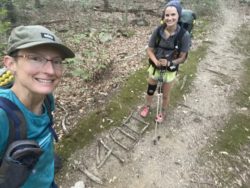 It was eight-ish miles to town; Hobble-It and I got an early start. Shortly after crossing a dangerous highway we came upon the 1,400 mile point, yay! Then I booked it to town, semi-running on flats or non-rocky downhills. I did pause on top of Bear Mountain to climb Perkins Tower and admire the NYC skyline in the distance. Then it was downhill to the Bear Mountain post office where I picked up my resupply box; making it within the narrow 9-11 am hours. 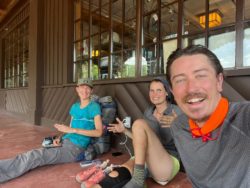 I found an outlet outside the Bear Mountain Inn gift shop and charged devices while I sorted through my box. Hobble-It joined me and we caught a few Pokémon. When Sonic arrived the three of us uber’d to American Burrito. I got my burrito in a bowl: vegetables, beans, rice, cilantro, and avocado. A hiker named JTown joined us for lunch. Then we walked back to Bear Mountain. Hobble-It and Sonic went to the pool while I did a snippet of trail that I missed due to the uber.

To get out of town the trail crossed an impressive suspension bridge over the wide Hudson River. There was a poorly marked intersection and brief road walk with a narrow shoulder, then it was back uphill with my heavy load. I listened to podcasts and put on a bug net when insects kept buzzing my ears. Our destination was a ball-field near the Graymoor Spiritual Life center. It had a covered picnic area with outlets, water, and port-a-potties nearby. During dinner I chatted with Tanager and City Slicker, a couple from the Ukraine and Russia. We retreated to our tents to escape a mosquito onslaught.

The morning was sunny with a light breeze. I spread my sleeping bag on a table to air out and let my food soaking jar dry in the sun. Meanwhile I journaled and made use of the strong cell signal. Sonic also dried gear and journaled. When I started hiking I felt recharged by a good night’s sleep and leisurely start. 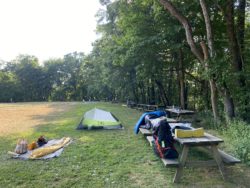 Unlike the past several days, there was plenty of water along the trail. I carried only 1-1.5 liters since I had a heavy food load. For lunch I stopped at a grassy area and chatted with JTown. All day the terrain undulated gently, giving my legs a mixture of activity. I saw a black snake for the first time in a long while. Three small garter snakes slithered away at my approach.

I stopped for the day at RPH shelter. It was a three-sided building with a pair of booted legs dangling from the ceiling. A large grassy field provided excellent camping. The privy had character; two paintings and a flush knob, though of course there was nothing to flush. Serendipity spent the last two nights off trail, yet arrived minutes behind Sonic and Hobble-It. She can move when she wants to. The four of us ate dinner together at a picnic table, sharing snacks and dessert.

Upon rising I discovered that the top of my sleeping bag was wet with condensation. First time that has happened, though I often sleep without my rain fly. I worried about stuffing it while damp. Luckily, there was a sunny spot near the shelter where I hung it over a chair to dry. Hobble-It and Serendipity got an early start, the latter to meet friends once again.

Sonic and I set out together. There was a coolness to the air and the trail offered a couple views of small towns amidst trees. We ran into our first south bounder. He started on June 1 from Katahdin. After five miles we came to a paved road and walked along it to the Mountain Top Market Deli. Sonic got a sandwich while I got snacks, then we both got ice cream treats. We chatted with six other thru hikers who were getting food.

The deli snack filled me with energy and the next several miles flew by. We stopped at the next two shelters. The first for a snack and the second to elevate legs. In between, a section hiker named Porridge showed us a tiny, adorable snapping turtle that she pulled from a stream. At Dover Road we came upon the biggest oak tree on the AT. It is 20+ feet in girth! At its base a sweet lady had trail magic. I sat upon a fallen limb of the oak to chat, snack, and drink Gatorade. 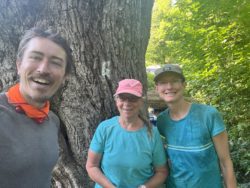 Two miles after our trail magic stop we met up with Hobble-It. She had powered down the trail to reach a Malaysian food truck that closed at 4 pm so she’d been waiting a couple hours. The three of us took a taxi to a grocery store where Hobble-It resupplied. The driver kindly waited and took us to Pawling’s Memorial Park which allows thru hikers to camp. Hobble-It and I ate dinner in the picnic pavilion while Sonic went in search of tacos. Two other thru-hikers, Money Stache and Hot Mess, had set-up tents prior to our arrival and joined us as we finished our meal.