I told my friend I was going to go write this blog post and he said, “Uh oh, is it zero out of ten fudge stripe cookies? Is this it?”

It’s not, but this was the week when I realized I need to define “zero fudge stripe cookies” as “something that happens that takes me permanently off the trail” because dude, this one was a doozy.

Thanks to some gnarly weather in the Smokies and some closed roads, we ended up stuck in Gatlinburg for a couple of days. I will say that the magic of Gatlinburg wears off after a bit and two zeros there is one too many. 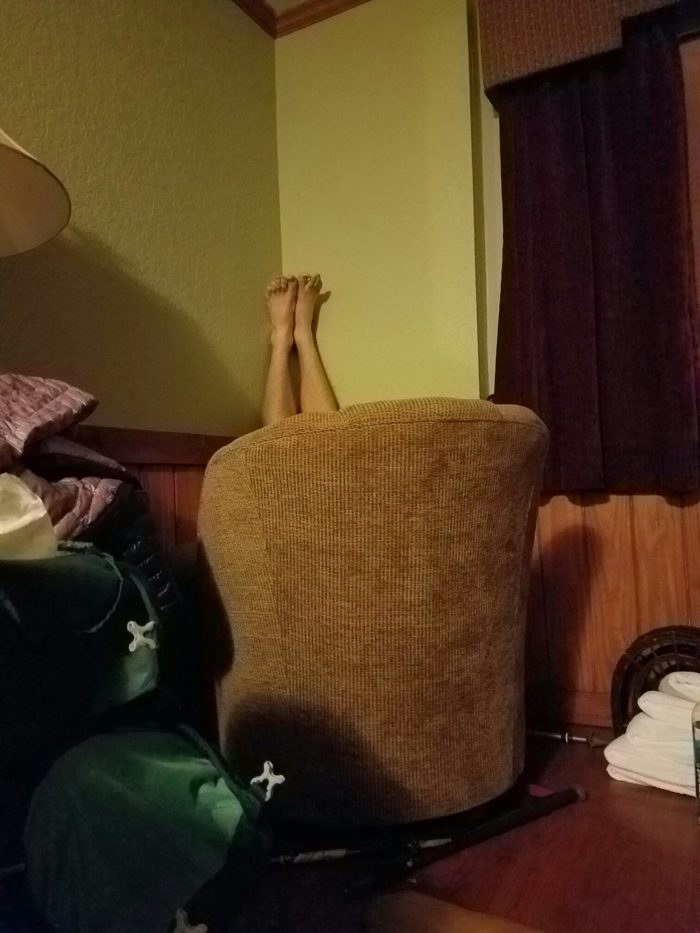 I woke up feeling sick a couple of times during our last night in Gatlinburg, but I brushed it off as too much town ice cream. I was  determined to push on the next day even though the feeling persisted. Cut to two days later, with me chucking it on the side of the trail and trying to find a phone signal so I could Google the appropriate leave-no-trace etiquette for dealing with trail-side vomit.

I don’t think it was norovirus or anything water borne (for which I am incredibly grateful, as both sound much worse), just a run of the mill flu that I probably caught from another thru-hiker who also hadn’t washed their hands for four days. What are you gonna do? I never took a zero, which was probably a bad call, but rather I cobbled together days of whatever miles I could manage. I got out of the Smokies, stayed a night at Standing Bear farm, and finally made it into Hot Springs, NC just as I started feeling like an average thru-hiker again.

Currently at 273.4,  including 66.6 mostly fevered miles since my last check-in. 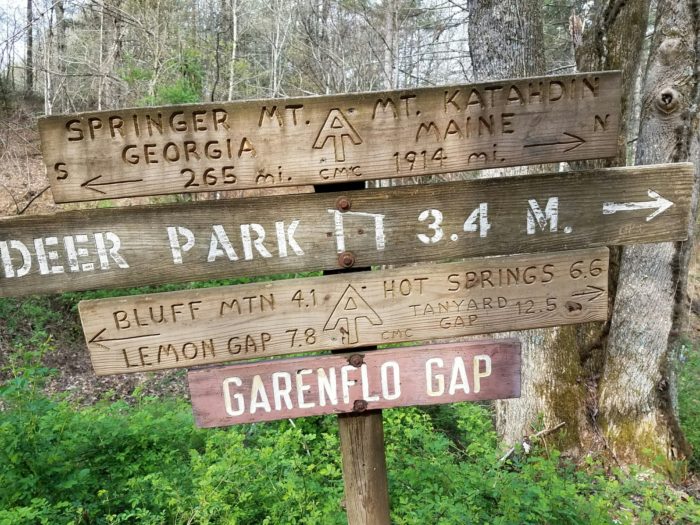 I actually spent much of the time hiking in my sickened state over this last week thinking about how exactly to express just how miserable backpacking with the flu is. Complaining about it in my head as venomously as possible was a great outlet. The blog post I first wrote included “all of it” as the low point, which fortunately is not true. I’d say that around 95% of it ended up being the actual low point.

I hiked out of Gatlinburg, recognized I wasn’t doing well and stopped after three miles, which was the logical thing to do. The next day, I tried to do that thing where you just pretend you’re not sick and go on like everything is normal because sometimes that magically works. It was a less logical thing to do. I hiked 12 miles, during which I spent the first two thinking this wouldn’t be so bad and the last two puking intermittently and trying to move as fast as possible through the muddy, icy slush that comprised the trail because it was getting dark and crap, was I going to make it to a camp before sunset? 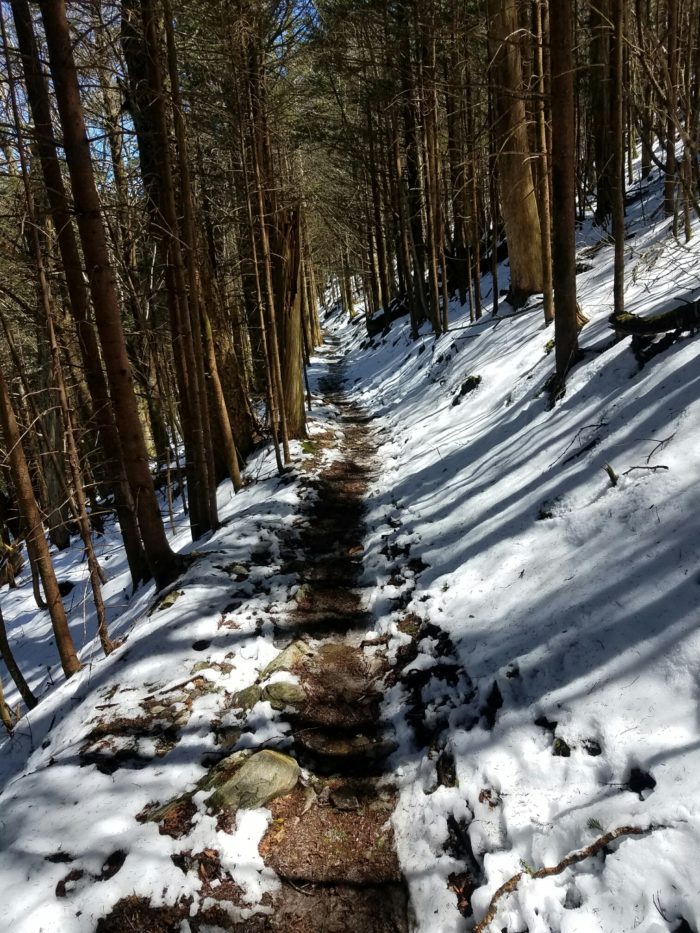 Look, I know this isn’t all that exciting, but I really wasn’t feeling up to taking many pictures this last week

I would not wish hiking with the flu on anyone, ever. I would cook my food, eat two bites, realize nothing else was going down, and then be stuck carrying a rehydrated pound of ramen for days. One of the great joys of each passing day on the trail is feeling your food bag getting lighter and lighter, but I came into Standing Bear having made zero dent in my incredibly heavy (since I was just starting to get really hungry again) food supply and lugging a five pound trash bag.

Even after I started feeling better, I still wasn’t getting hungry and I would have to force myself to eat food at the end of the day. Backpacking food really relies on hunger for most of its flavor, so each dinner was a struggle. I would nibble at a Clif Bar for lunch. Those things normally do nothing for me.

Unless you’re chugging uphill or navigating a tricky downhill, your mind kind of falls into a stupor while you hike, and you sort of forget you’re walking after awhile. But for all that I wasn’t hungry, my body was still only running on little more than two bites of a Clif Bar for days at a time and I couldn’t fall into that stupor. Every 100 yards was a struggle, regardless of the terrain. I felt like I was running through water. I felt like I wasn’t adding any miles to my total and the bubble of hikers I knew and liked was getting light-years ahead of me.

I could go on and on about how much this week sucked, but I’m cutting myself off here.

I camped by myself for the next two nights out of Standing Bear. I’m kind of a miserable asshole when I’m not feeling well, and it was a relief to not have to try to restrain my miserable assholery around other humans. Thru-hikers have to stay at shelters in the Smokies and we had been really bunched up during the worst of my illness. It was almost relaxing to be totally alone for the first time since I had started, really. I could also pee wherever I wanted. It was great.

On my third day out from Standing Bear (I was not moving fast) a couple of great things happened. I went over Max Patch and it was beautiful. I finally got hungry and demolished my food bag during lunch. And almost magically, I hiked 13 miles and didn’t feel like dying. I pulled into an unofficial campsite listed on Guthooks around 4:00 and looked up hopefully every time a hiker passed. Three nights by myself felt like it would be a bit too much alone time.

I was just becoming resigned to the idea of spending another night alone when Tabitha and Scott rolled in, two section hikers from Charlotte. Tabitha poured me a mug of wine. Scott started a fire. Campfires are a bit of a luxury on the AT since most thru-hikers don’t feel like starting them, but they are so nice sometimes.

People like to say, “The trail provides” out here. It’s a lovely way of acknowledging that, at your lowest moments, the trail can give you exactly what you need. When I was trudging through blisters and snow back on my third day on the trail, Duffy from the Hiker Hostel happened to drive into Woody Gap just as I was standing there, aimlessly unsure about what to do. The trail provides, he assured me as he drove me back to the Hiker Hostel that night. And now, after my suckiest week on the trail to date, the trail provided me Tabitha and Scott.

I churned out the 9 miles into Hot Springs the next day and made it into town in time for lunch.

I got some really amazing trail magic in Brown Gap from two 2016 thru-hikers (Arrow and I’m so, so sorry I forgot the other name). I think their pancakes, eggs and hash browns were a big part of the reason I got a normal day of hiking in the next day.

A volunteer named Coach giving the trail some TLC also gave me an apple from his lunch, and I almost skipped along as I ate it.

MVP of the Week

Hunger. I am never taking hunger for granted ever again. The first lunch after getting hungry again felt like coming up for air after days underwater. I took extra joy out of scarfing down my town food today.

They were the only winners from the flu. They got a little bit of R&R as I inched out seven mile days.

I really thought this would be a 1 out of 10 fudge stripe cookie week throughout most of it. But in the end I’ll give it 2 out of 10, mostly thanks to Tabitha and Scott.