Meredith “Sunny” Eberhart, 83—better known as the Nimblewill Nomad—has become the oldest person ever to thru-hike the Appalachian Trail. He finished his flip-flop hike on Sunday, November 7th, in Dalton, MA, in the company of friends and supporters.

Eberhart’s thru-hike was thoroughly non-traditional. Rather than beginning at Springer Mountain, the AT’s Southern Terminus, he started hiking from his home on Flagg Mountain, AL. Starting in February, he first hiked the entire Pinhoti Trail from its Southern Terminus on Flagg Mountain. From there, he walked 72 miles east on the Benton Mackaye Trail to join the AT. He reached Springer on March 30th with 420 trail miles already under his belt at what most people consider the starting line.

Eberhart hiked from Springer to New York before jumping north to Shaw’s Hiker Hostel in Monson, ME due to weather concerns. He hiked the rest of the way from Shaw’s to the AT’s Northern Terminus at Katahdin, ME, summiting in mid-August. Next, he returned to Monson and hiked south to Dalton, ME. Again facing weather concerns, he skipped back down to New York and completed the remaining 136 miles between New York and Dalton northbound.

READ NEXT – After Tens of Thousands of Miles, Has Hiking Legend Nimblewill Nomad Finally Retired?

His November 7th finish wrapped up nine months and some 2,613 miles of hiking. He averaged roughly 10 miles per day, often spending the night at hostels or trail angels’ homes, but sometimes setting up at primitive backcountry campsites as well.

Eberhart completed his record-breaking hike in the company of Dale “Greybeard” Sanders, the previous oldest AT thru-hiker, who joined him for the last two days of the journey. “Grey Beard is such a dear friend,” Eberhart wrote in his blog of the moment Sanders surprised him on the trail two days before the finish. “He encouraged me to attempt this long, difficult journey. And here he is. He’s come to join me and to share the joy at the end of this quest…”

Greybeard was 82 when he broke the record in 2017. Victor “Pappy” Kubilius came close to breaking the age record in 2018 at the age of 87 but reportedly got off the trail early due to a knee injury.

Eberhart, meanwhile, celebrated his 83rd birthday on October 30th at the home of a Massachusetts trail angel, just 10 days from the finish.

READ NEXT – Age is Just a Number: Interview with Grey Beard, Attempting Record for Oldest AT Thru-Hiker.

The Triple Crown and Beyond 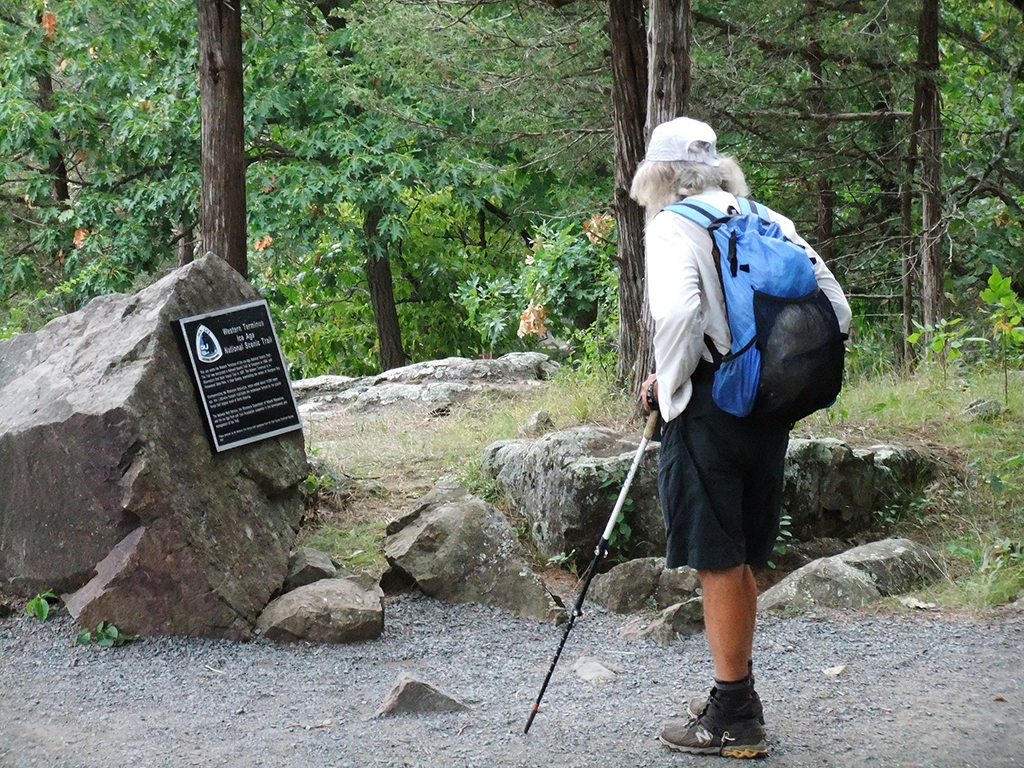 Eberhart, a retired optometrist, began long-distance hiking in the 80s. However, he dove into the endeavor in earnest in 1998, at the age of 60. That year, he hiked 4,400 miles from Florida to Quebec, a journey that incorporated the Florida Trail and the AT. In 2000 and 2001, he hiked the same route southbound, tacking on miles in Newfoundland and the Florida Keys. Completing that trek made him the first known person to traverse the entire Appalachian Range in North America—a journey of some 5,000 miles.

Eberhart has been hiking ever since. He’s tackled another long walk nearly every year for the past two decades, accruing tens of thousands of miles. He became a triple crowner at age 70, having hiked the AT twice, the 3,100-mile Continental Divide Trail twice, and the 2,600-mile Pacific Crest Trail once.

Eberhart is widely known as a warm and outgoing individual. The name “Nimblewill Nomad” comes from his onetime residence on Nimblewill Creek, not far from Springer Mountain. His other moniker Sunny, is a childhood nickname given to him by his mother. 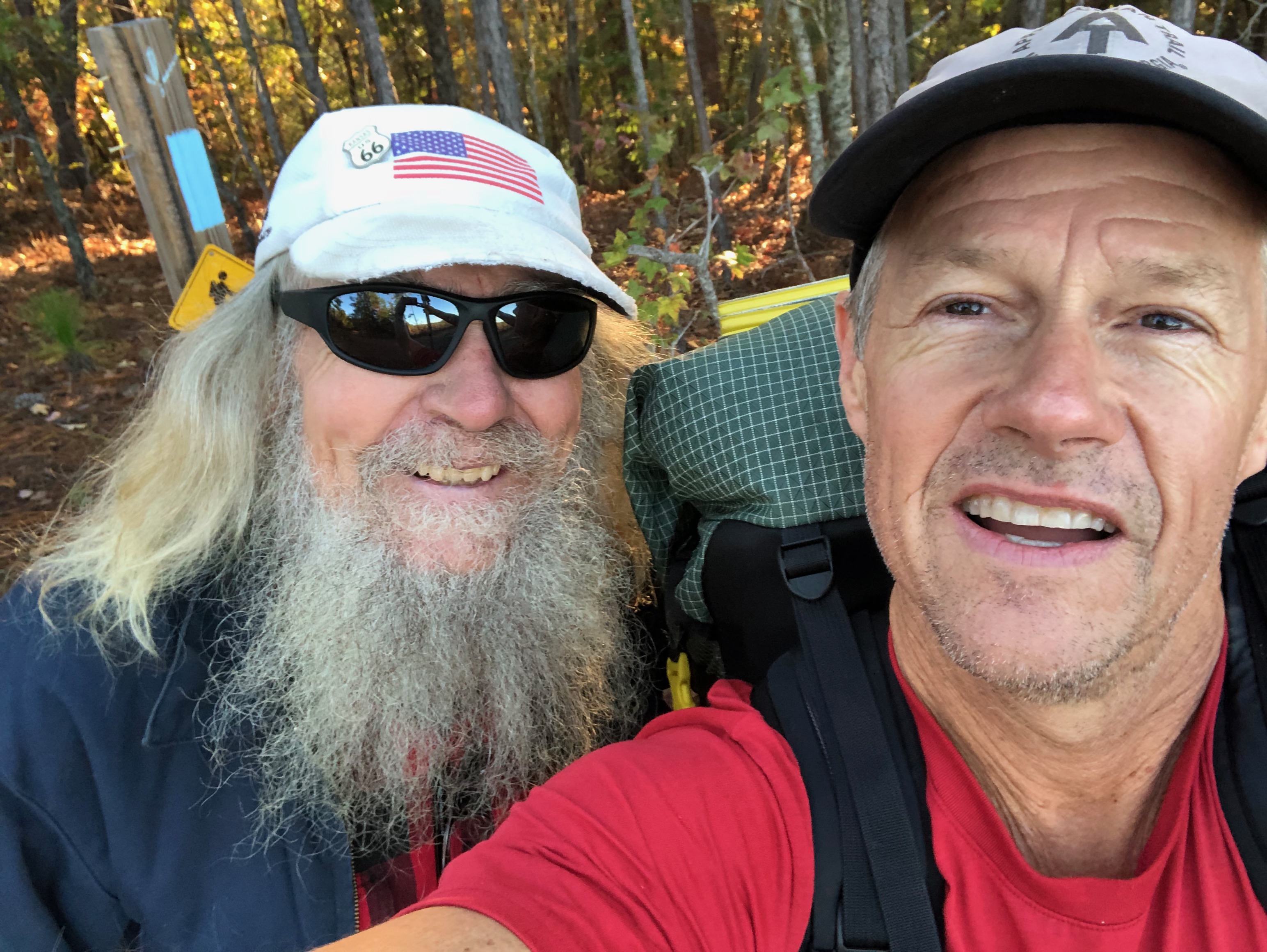 He has written several books about his travels, including Ten Million Steps: Nimblewill Nomad’s Epic Ten Month Trek from the Florida Keys to Quebec.

In his blog, Eberhart described feeling a combination of relief, anxiety, disbelief, and “mixed feelings of wanting to continue” as he approached the end of his 2,600-mile record-breaking journey. “To all who’ve supported me, to the legions who’ve encouraged me, and to my generous sponsors, from the bottom of my heart, thank you for this amazing journey!”