The NOC to Newfound Gap Scorecard

Time travels at a weirdly different pace out here and I feel like I have way more than a week’s worth of stories to report. I’m currently holed up in Gatlinburg, Tennessee, skipping some freezing temps in the Smokies, although we’ll be back out in the thick of it tomorrow.

The first two days out of the NOC were hard and that’s all I have to say about that. We resupplied at Fontana Village and stayed at the Fontana Dam shelter, the nicest shelter on the AT. It’s dubbed the Fontana Hilton for its showers, public restrooms, solar powered charging station and gorgeous view of the Fontana River. 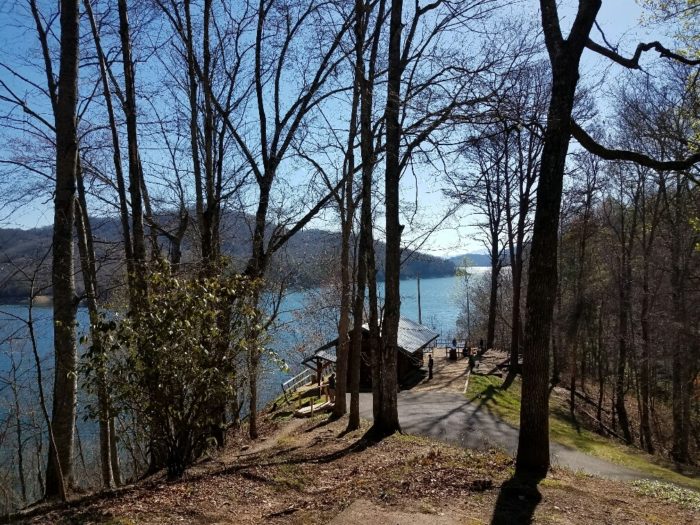 After the previous two days on the trail, this might well have been the real Hilton

We then entered into the Great Smoky Mountains, famous for its temperamental weather and for containing the highest spot on the AT, Clingmans Dome, which we summited the same day we arrived here in Newfound Gap and hitched into Gatlinburg, soaked from rain and smelling terrible.

All of the Smokies (at least so far; it’s only been three days). We took a leisurely hike out of the Hilton, crossing the Dam and taking lots of touristy pictures. 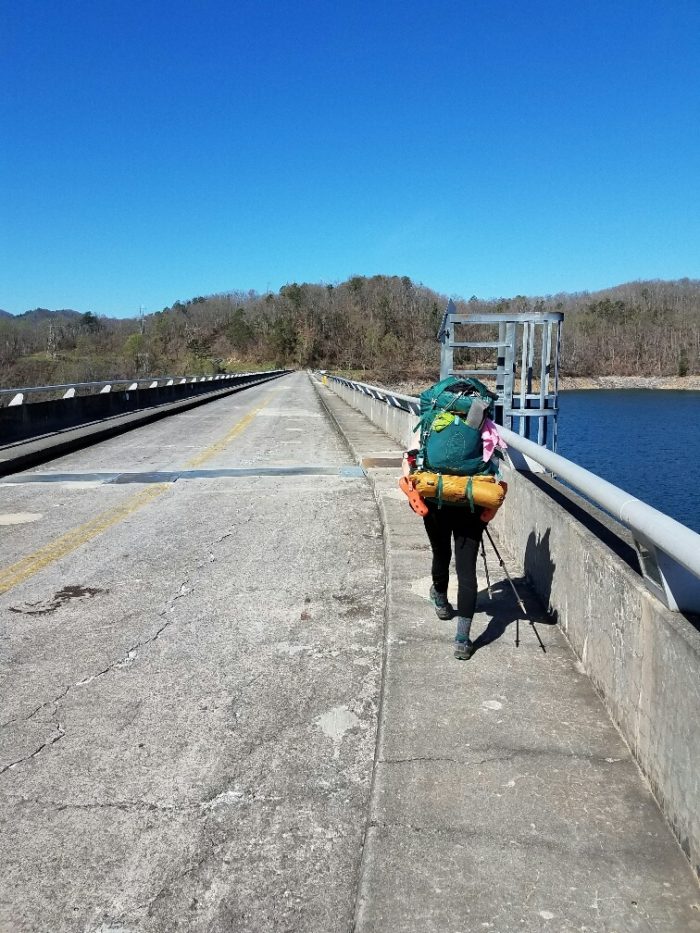 That is a hideously packed pack, I know

It was a gorgeous sunny day, and we scoffed at the reputation of the Smokies I referred to above. Little did we know.

It poured the next day. Like the literal definition of “poured.” Someone could have been pouring thousands of watering cans on my head. Nothing makes you want to hike faster than a little rain, along with some thunder and lightning to get your adrenaline going. I desperately wanted a spot in a shelter, since setting up my tent in the rain sounded awful. I ended up finishing an 11 mile day at 1:00 pm and happily got a space in a very crowded shelter with a warm fire crackling in the fireplace. Damp, brightly colored hiking clothing hung from the ceiling like a terribly decorated birthday party. 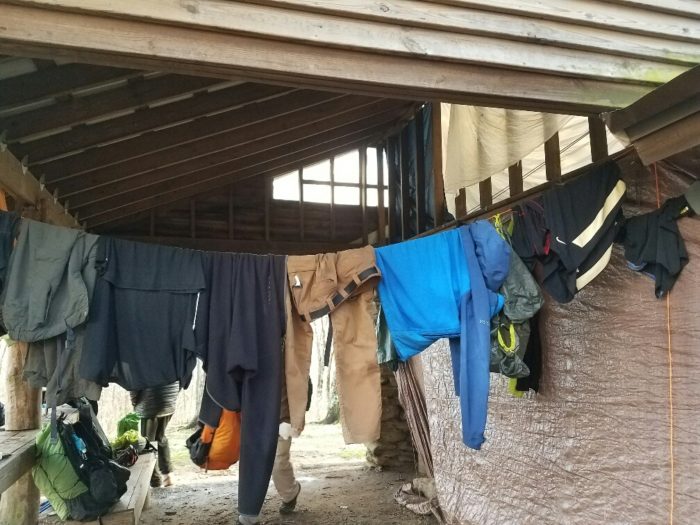 Not exactly the party favors you would hope for

I changed into some dry clothes and was curled up in my sleeping bag by 2:00. It felt like an early day off from school.

The next day the sun came back out and I hiked a 13 and a half mile day. I spent most of the day pondering whether hiking up and down thousands of feet of elevation with a 30 pound pack is harder than running an actual half marathon, but eventually I realized that this is more like doing half marathons pretty much daily.

The Smokies are beautiful and green and full of private places to pee. They’re foggy in a way that happily reminds me of home and when I get to vistas, I love to watch the mist roll over the mountains the way it rolls over the Golden Gate Bridge. I’ve seen deer and hawks and had a mouse nibble at my finger while I was trying to sleep. The trail skirts along the borders of Tennessee and North Carolina, so we have state line crossings several times a day. It’s easily been my favorite stretch of the trail so far.

We hiked into Newfound Gap in the pouring rain, and I smoked another 10 miles before hitching into the most amazing trail town we’ve been to yet. Gatlinburg is the home of Dollywood, and it makes perfect sense as the home of Dollywood. It’s like a strange, woodsy beach boardwalk and we’ve spent a zero day here doing about as much walking as an average day of hiking. We ate giant cinnamon rolls and played mini golf. Ole Smoky Moonshine has a distillery here, and hikers are walking around tipsily after their moonshine tasting. The whole strip is lit up and full of smells and it’s a bit of a sensory overload after the previous few days in the woods.

This stretch was just annoying. We walked up for two days. I had already slept terribly in the bunk room at the NOC because of two nights of thunderstorms, so I was running on three days of almost no sleep. My friend Marco is great at keeping everyone updated on what we’re hiking, but we’re still learning how to read elevations and he told me Jacob’s Ladder was going to be easy. It was terrible.

When things get tough, there’s this evil voice in your head that says it’s just you who’s struggling. You have to sort of squash this idea that everyone else is having an easier time of it while you’re huffing and puffing and screaming internally. The second day out felt like it was taking forever, even though it was 11 miles, which is pretty standard by now. A group of us circled with three miles to go and another hiker said, “The last two days have been so hard.” Everyone nodded glumly, looking as exhausted as I felt. The evil voice quieted and I felt a clenching in my chest relax a bit. But it still sucked.

MVPs of the Week

I got two care packages! One from the family of two girls I used to teach and one from my friend Laura. They made my heart burst and I happily walked around Fontana Village and Gatlinburg showing them off to everybody. 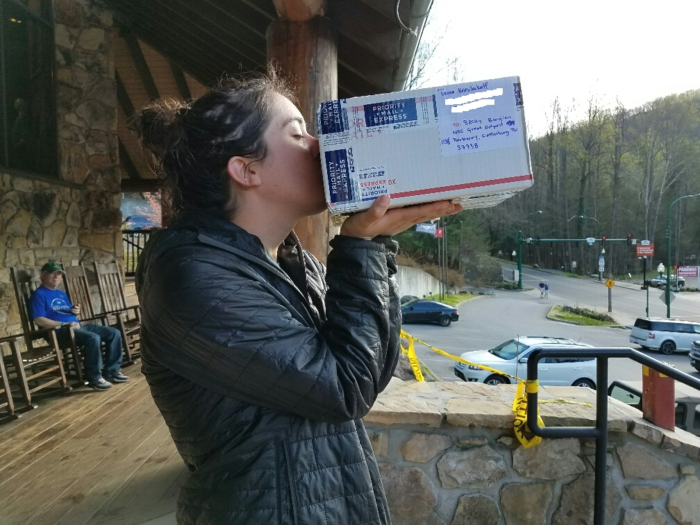 Random Things I Liked This Week 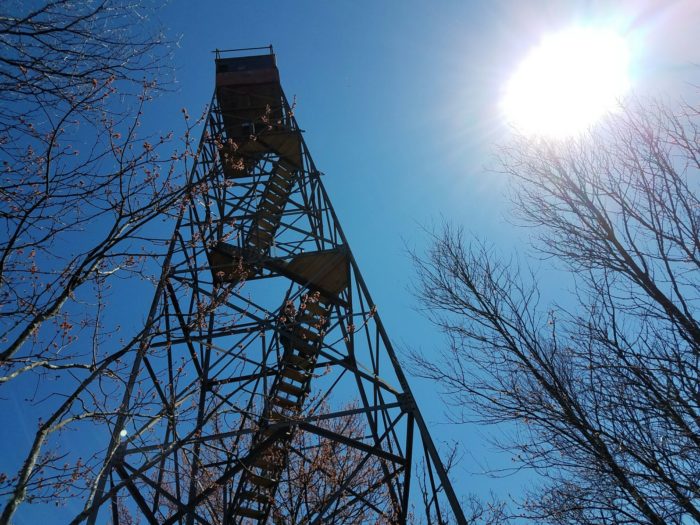 It had been overcast every time I’d previously passed the AT fire towers. But the weather was beautiful on our first day in the Smokies, so I took the opportunity to learn that fire towers are terrifying regardless of whether you’re actually afraid of heights, which I thought I wasn’t. It wobbled as I climbed and I inched my way upwards, sat for two seconds, and immediately turned around and headed back down. 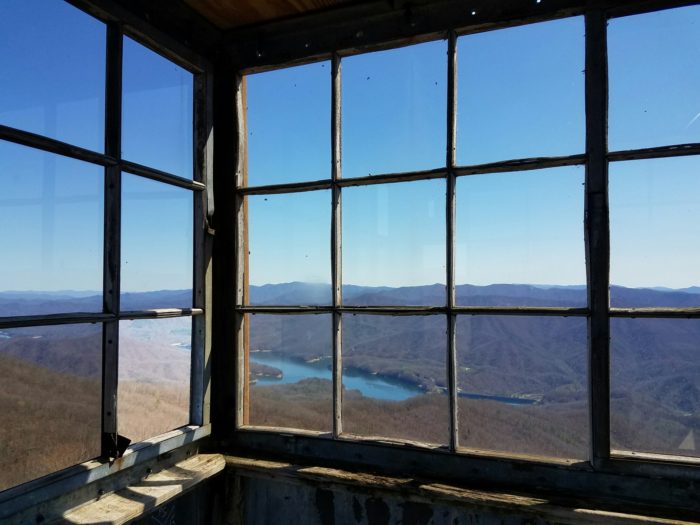 The view from the top of Shuckstack

The NOC had limited resupply options so I splurged on some backpacking meals. I saw one was bibimbap, which made me miss my friend Amanda (who introduced me to bibimbap and was my partner in culinary adventures for years). It was delicious and if you work for Good To-Go meals, please be my sponsor! I’ll take lots of swanky Instagram pictures of your food all along the Appalachian Trail.

Fire pits, with or without a fire in them, attract hikers like flies. They heal any hiking woes of the day, and I think they could also cure minor depression, athlete’s foot and male pattern baldness. They’re pretty magical. 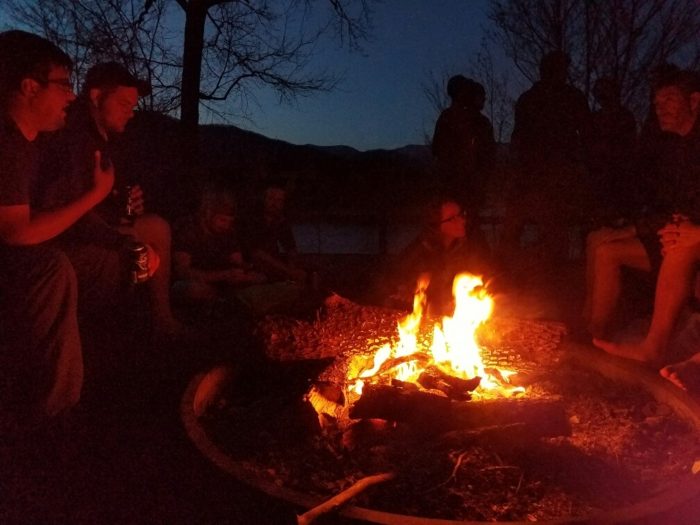 Fire at the Fontana Hilton

Some days over 80° and some days rainy and cold. It was so windy as I climbed an observation tower at Clingmans Dome that I saw a bunch of random stuff littering the tops of the trees, and so I protectively wrapped my arms around my pack as I gingerly climbed back down.