We woke up and packed up after the other NOBOs had already left. I was leading, and the terrain was back to back gradual climbs, but the hot weather was making it miserable. Early in the day, we were going downhill when I heard someone up ahead say hi, and that he was just thinking about us. It took me a minute to get closer and see that it was Norm! We hadn’t seen him since Boiling Springs. He summitted Katahdin (finishing his triple crown), and was doing a yoyo hike going SOBO. Norm and the 3 of us shared some funny experiences, and we talk about him often. We followed him on instagram, and knew he was yoyoing, but we didn’t know if or when we’d see him. We sat and talked for a while, catching up, before going our separate ways. 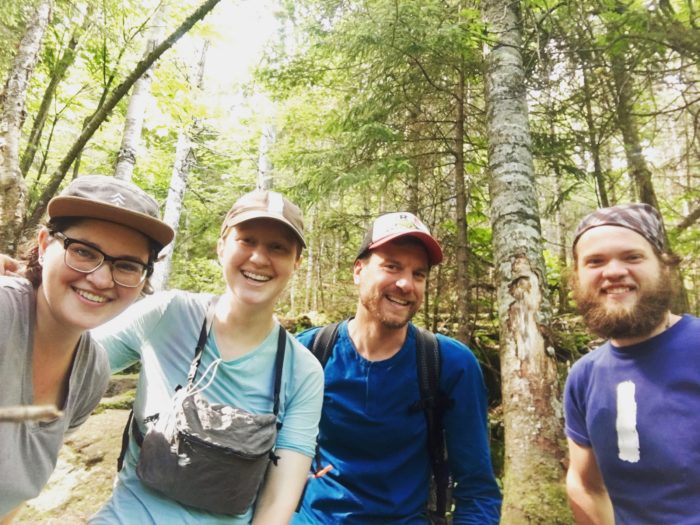 I was feeling dehydrated and exhausted after hiking in the morning. We took a break near Surplus pond and I drank most of my water with an electrolyte packet. We went up Wyman mountain, then had a flat area where the terrain was a bit easier. We stopped for another break when we had cell service and reserved bunks in Rangeley.

The hike to the shelter went quickly, and we stopped before the shelter for water. I drank a liter while we sat and ate snacks. While we were sitting, Medicine Man came by and got water. Birk was at the first water source which was a trickle compared to this one. It was great to see familiar faces. The skies darkened while we were at the water source, and I saw lightening strike in the distance. We hurried to the shelter just in time to miss the rain.

2 SOBOs showed up with a very tired husky. The husky wasn’t a fan of the thunder, and visited with us while her owner went to get water. Rash, Piñata, and I cooked dinner at the shelter, and decided to try and push on either 1 or 4 miles to a campsite to shave some miles off tomorrow.

The rain had stopped, even though the sky was still dark. Rash and Piñata left and I followed a few minutes behind. At the bottom of the first downhill after a mile, I found Rash and Piñata at the campsite with a few tenters who started a fire. I put my tarp up just as the downpour came. Piñata had rescued my pack under her tarp and I ran to get it after I got set up. I sat in my hammock for the rest of the evening, listening to the rain, and made a rough plan of the remaining days and miles to get to Katahdin.

I didn’t sleep well last night. The rain came down all night, first hard, then in loud, sporadic drips on my tarp. I got up early, around 5:30, and packed up. I went across the trail to the picnic table by the few tenters and made oatmeal. Rash and Piñata packed up and Piñata got water. As we ate breakfast, Birk and Medicine Man passed our campsite and headed across the river up Moody mountain. After breakfast, we crossed the river easily. Moody mountain was not such an easy task. Whether it was just because it was early or we were tired, the mountain was a bear to climb. We came down the descent, and ran into Birk and Medicine Man again. Rash, Piñata, and I stopped to use the privy at the campsite, which was huge and clean. Birk and Medicine Man caught a shuttle into town at the road.

Just after starting the climb to Old Blue, Rash realized he needed water from the stream just before the road. I gave him my bag and continued on up the mountain since I’m slower uphill than they are. Old Blue was long, but easier than Moody. It had lots of rebar in the rock and slanted rock slabs towards the top. I waited in the sun on a rock for Rash and Piñata. As soon as they arrived we headed out, and stopped for water at the stream on the way down.

Rebar ladder with water flowing past

The rest of the hike to the shelter for lunch was small ups and downs, but the terrain wasn’t terrible. We got to the shelter and found 3 SOBOs there along with Rocket Power, who left shortly after we arrived. We talked with Red Beans, Indigo, and the 3rd SOBO, swapping advice and talking about hostels. It rained very briefly then stopped. 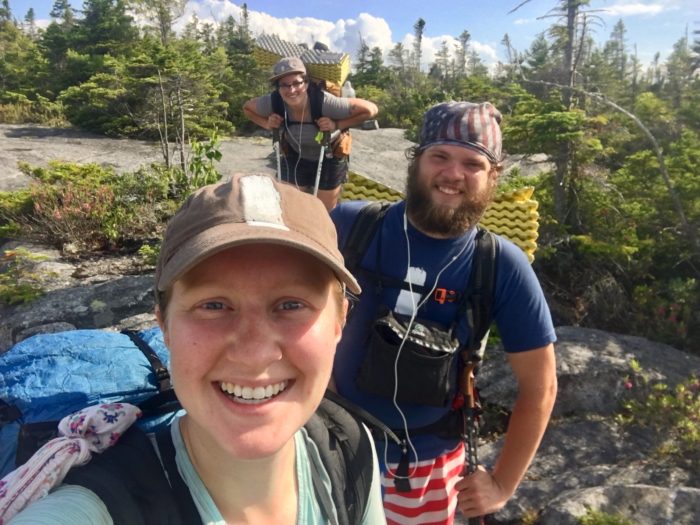 On top of Bemis mountain

Bemis mountain was mostly a slanted rocky summit. The day was turning out to be beautiful and sunny, and the rocks in the sun were gloriously dry and easy to walk on without slipping. My feet still hurt from walking on the rock, though, and I was happy to switch to cushy pine needles. 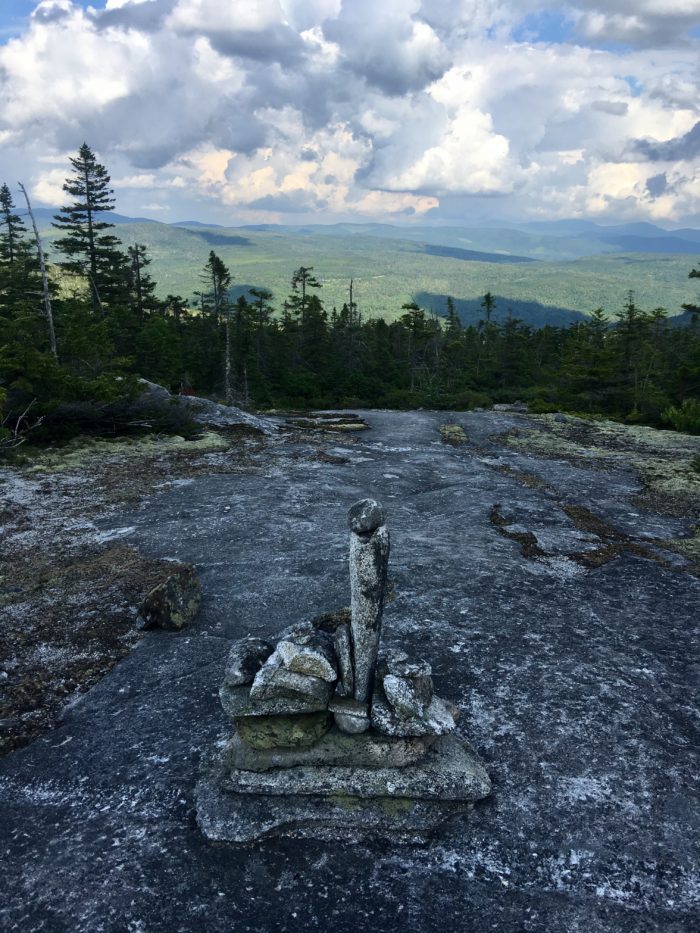 Bemis mountain with a neat carin 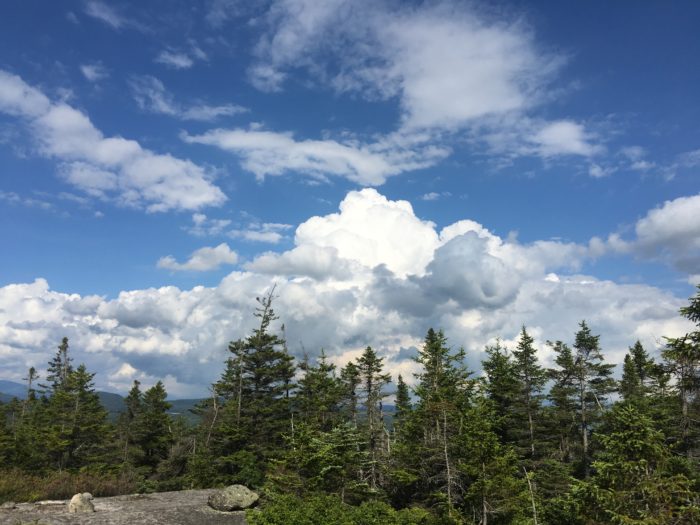 Part of the descent was very steep, and we slid a few times. Towards the bottom of the hill, we found a sign that read, “Trail Magic ahead!”, and I sprinted down the last section to the road. The husband and wife team were just packing up, but unpacked to cook us each 2 hotdogs with a toasted bun. I had been craving hotdogs for weeks and these hit the spot. 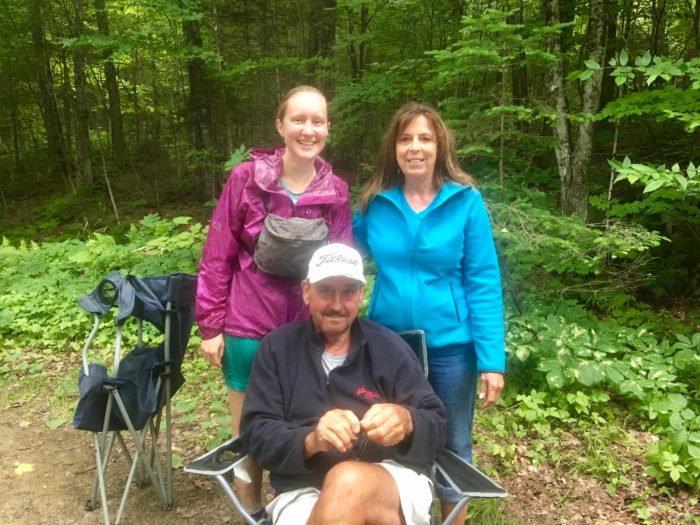 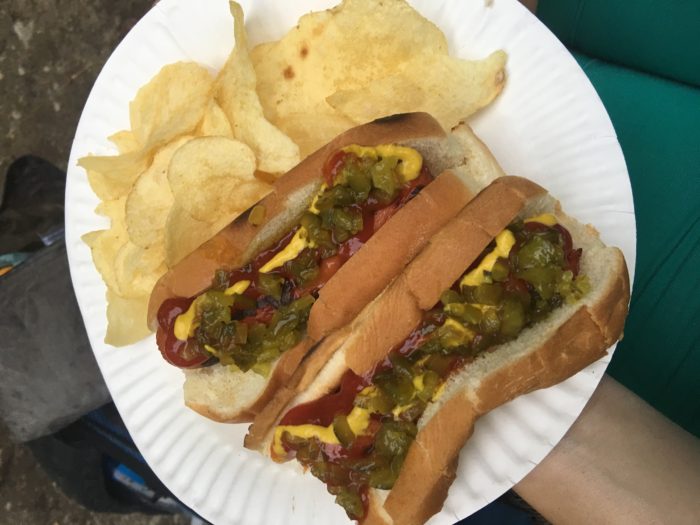 They were happy to see us, saying they didn’t get as many hikers as they’d like today, but we made up for it. I could’ve hugged them I was so happy to see them. We were all exhausted and very, very hungry. As we sat and talked, it started raining. The rain came down hard for less than 5 minutes, then stopped abruptly. The man didn’t seem concerned about it when it started, like it was a normal occurrence.

After being stuffed with hotdogs, we decided to camp at that road instead of push onto the campsite up and over the climb. The hammocking options were slim, and we set up our tarps very close together. We stayed up late reminiscing about the start of our hike and how far we’ve come. 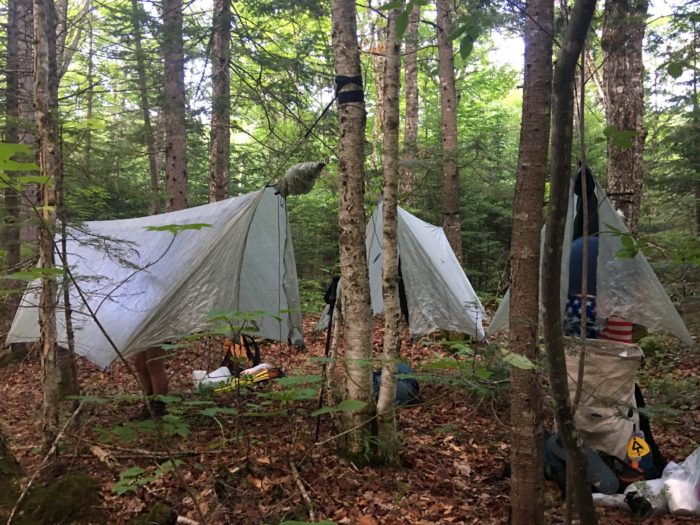 Our hammocks with the tarps almost touching

We woke up early, packed up our campsite, and got on trail. Today was town day so we were extra motivated to leave early. We had a couple climbs to do early in the day, but the weather was sunny and beautiful, so they didn’t slow us down. 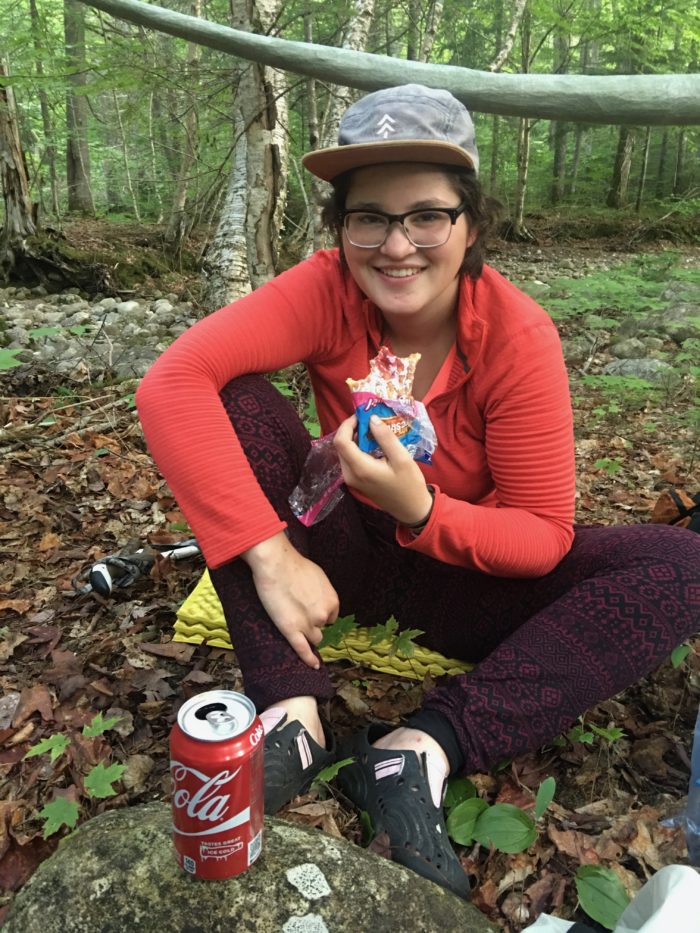 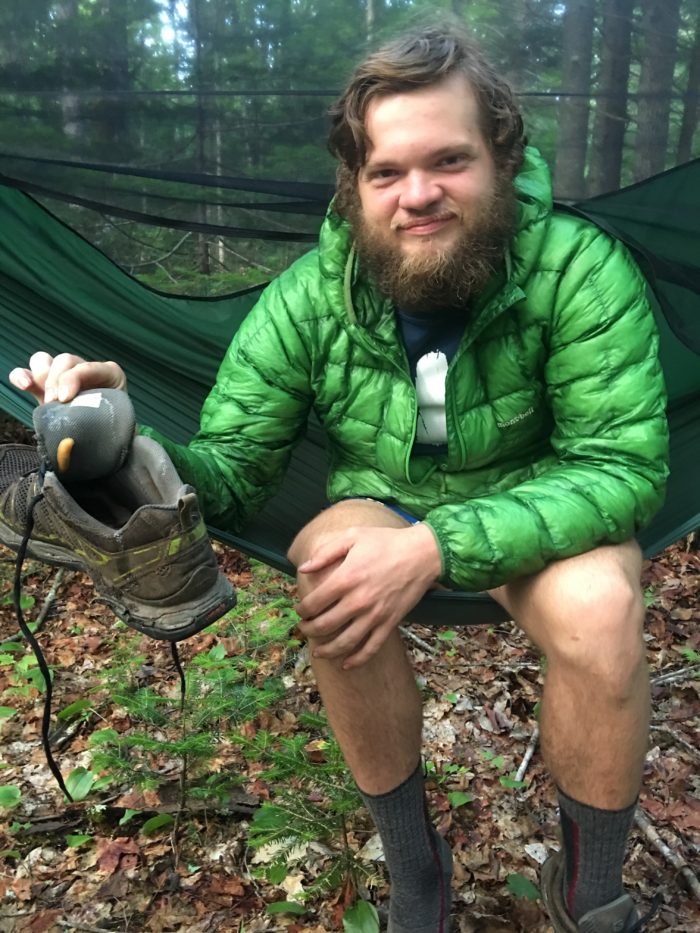 Rash found a slug on his shoe

Most of the day was walking on planks above bogs and mud. It was tedious work not to fall in or slip off the boards. We came to a lake with a beautiful small sandy beach, and I took my shoes and socks off for a swim. 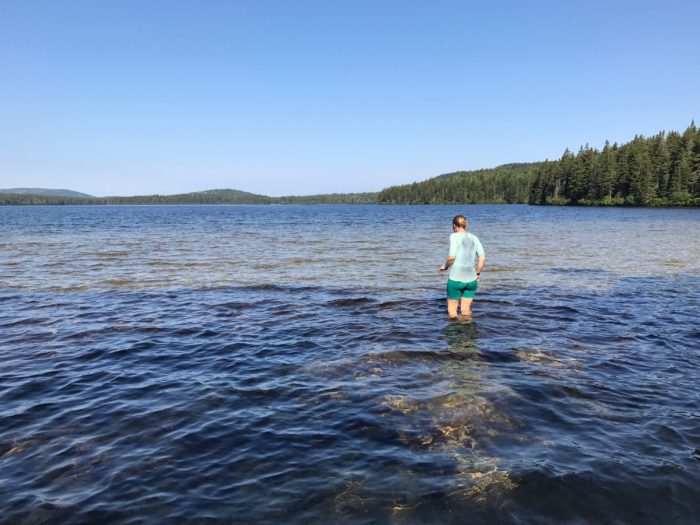 Taking a dip in Sabbath Day Pond (picture by Piñata)

We hung out at the shelter for a few minutes, eating the rest of our snacks. We were all out of food save a few snacks, which made our packs light but made us eat the leftover snacks that weren’t good enough to eat right away. Rash and Piñata had fig newtons left over and I had some gummies and cracker jacks. 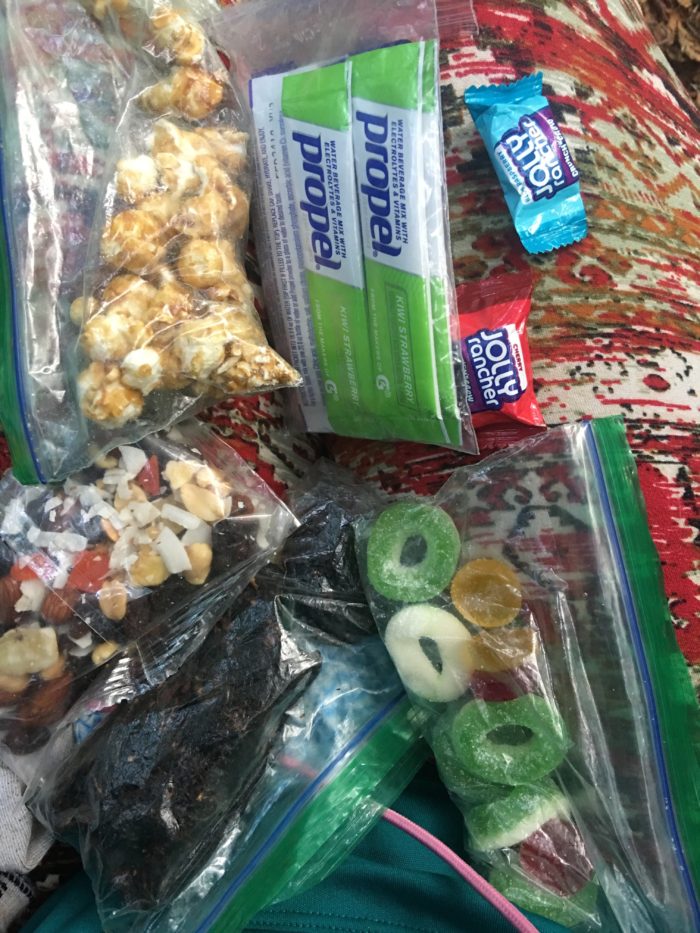 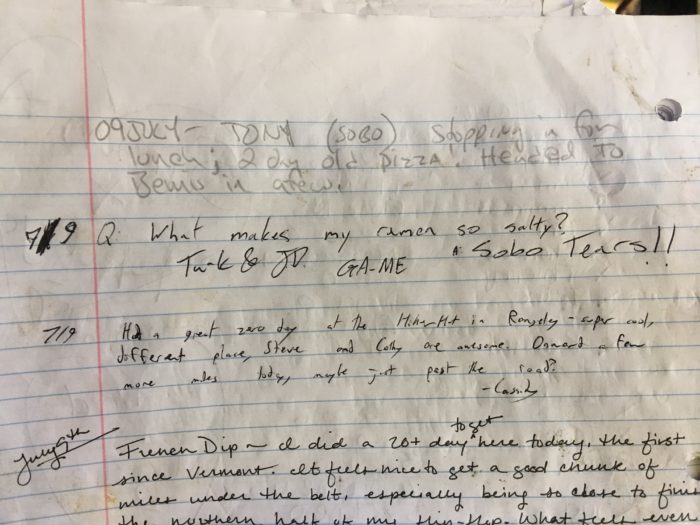 The funny shelter log entry from Turk and JD

We spent the rest of the day walking on planks and doing small climbs. We stopped at a campsite for water, and a hiker named Snooze with a Virginia Tech shirt came and sat down near us. He had his back to the trail, and when he heard someone coming, he said it was his sister (without turning around to look). Piñata and I look confused at the man with the big black beard coming down the trail and ask again if it’s his sister, which he confirms without turning around. Once the man walks by, we had a laugh as his real sister, Sauce, hikes up and joins us. They’re joined by another hiker named Keller. Our groups laugh how we both have a brother + sister pair in them. 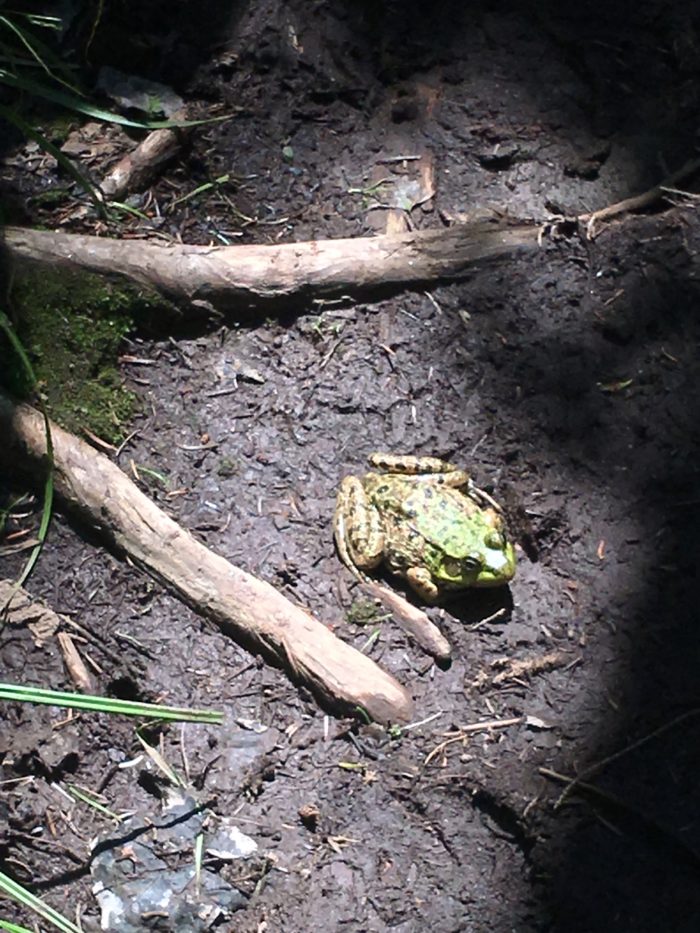 Large green frog on the trail

We left and called the shuttle when we were close. We got to the parking lot and found another large AT sign to take a picture with. The shuttle arrived and took us to the Farmhouse hostel. 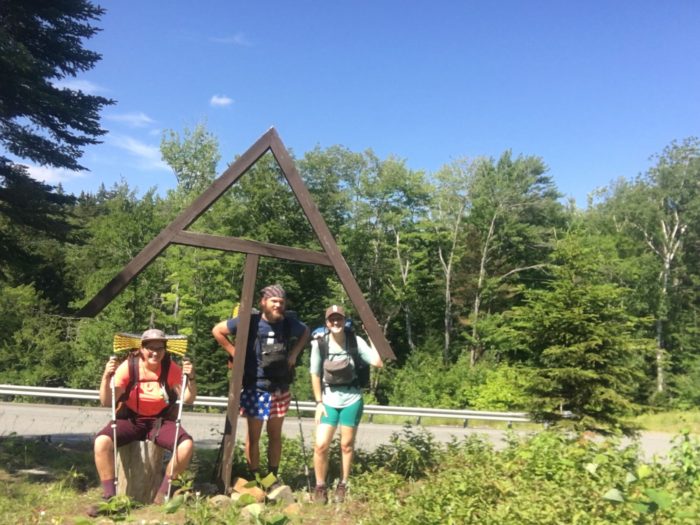 We went to the grocery store for resupply and dinner, and spent the evening exhausted, sorting our food. I could barely keep my eyes open, and thought about taking a zero, but Piñata brought up the good point that we should hike when the weather is good so we can save our zeros for rain. We stayed in the loft which is accessible by a steep, rickety library ladder with wheels on the top that wriggled as we climbed it. To get to the bathroom, we had to descend the ladder and go up a flight of stairs to the other bunkhouse. But the area was very clean and nicely decorated, which was unusual for a hostel, and the kitchen was huge and clean. We socialized with Snooze, Sauce, and Keller before turning in.

Keller mentioned he remembered me from his shakedown hike in Georgia. He was at the shelter where I left my sleeping bag and had to run back and grab it!