Shenandoah National Park is behind me! It’s been a busy couple of weeks since I left Highlighter’s place and headed out into SNP.

What I’ve been up to:

Tippy Toes, Swiss Miss, Eagle Eye and I headed into SNP, got our permits filled out, and hiked 8 miles to the first shelter for the evening. One of the super awesome things about SNP is that it parallels Skyline Drive. One of the super annoying things about SNP is that it parallels Skyline Drive and the park has a rule against camping within a quarter mile of the road. It’s actually really hard to get that far away from the road. Because of this, all the shelters are off trail (and downhill) .2-.3 miles. In addition, it makes stealth camping difficult as the trail is almost constantly less than a quarter mile from the road, and there also is basically NO water on the trail. Water sources are almost exclusively from springs that have been boxed or piped, and they do this near shelters, which almost necessitates shelter camping. The lack of water sources and necessity of walking a quarter mile off trail to sleep was my biggest frustration while hiking SNP. 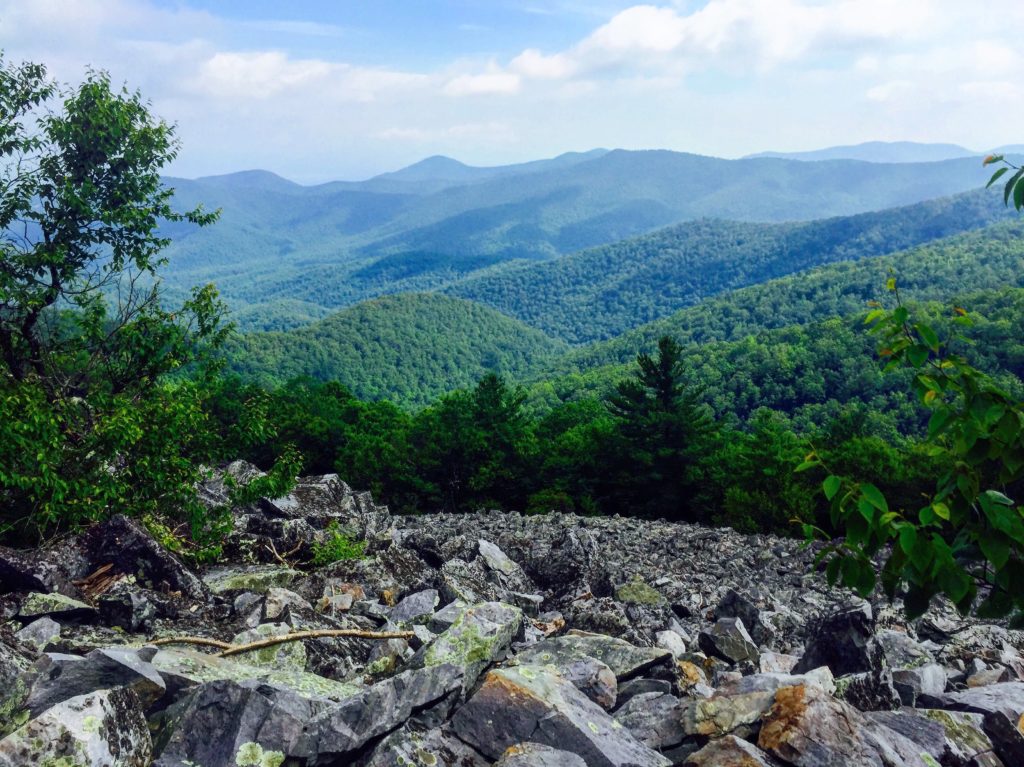 The view from the Summit of Black Rock Mountain, where a “Rock River” is slowly flowing down the side of the mountain.

That aside, I really enjoyed the park. I spent a good deal of time actually walking Skyline Drive instead of the trail because the views from the road are just spectacular.  Trail tip: Skyline Drive basically parallels the AT for the entire length of the park and offers way more views. If you aren’t a purist, consider hopping on for sections that are similar in length to the corresponding AT mileage.

The view from one of the many Skyline Drive overlooks that isn’t on the AT.

The other really cool thing about being in SNP is that you pass either a Wayside (small restaurant/grill) or a campground or lodge almost daily. This gives lots of options for on-trail dining and resupply. Trail tip: even though there are roughly 110 miles of trail between Waynesboro and Front Royal, you don’t need to pack much food. Unless you’re on a super tight budget, take advantage of the many waysides, camp stores, and two small towns (Elkton and Luray, which has an AWESOME hostel – more below) for dining options and keep your pack load light. I carried 3 full days worth of food and had some leftover by the end of the park.

While in the park I was able to pull several 13+ mile days and feel really good about it. I can see myself putting in 13-15 mile days on the regular from here on, which is what it will take to get to Maine on time. Unfortunately, I sustained an ankle sprain on my next to last day in the park and have taken two zeros and two neros now to rest. Hoping that is on the mend and won’t slow me down

Throughout SNP, I stayed exclusively at Huts (not in them, but camped nearby) because of access to privies and water, and also because of the increased security provided by abundant bear boxes and poles located at

I hitched into Elkton on day 4 and ended up getting a free place to stay nearby in Charlottesville, as well as a ride that was perhaps my scariest yet: the car was really fast and the driver liked to test its limits. 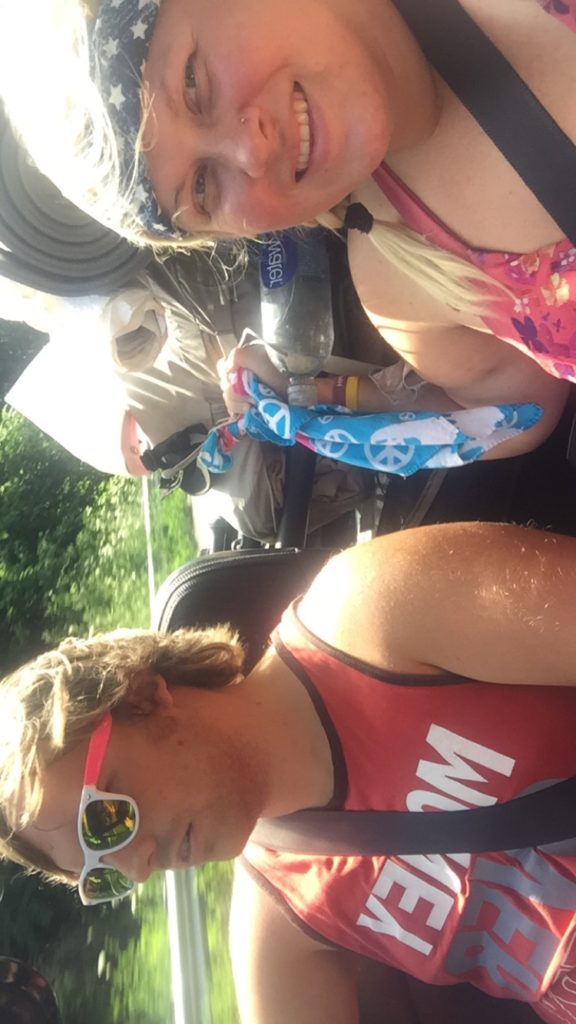 My “scared shitless” face because we were going so fast.

I also stayed at Open Arms hostel in Luray. I took a zero and a nero there and spent most of my time cuddling with Hank, the resident pup.  Trail Tip: STAY HERE. Allison, the owner, is super and she’s working hard to provide nice and affordable accommodations for hikers and travelers in the area. Luray also has a couple of cool restaurants and plenty of resupply options, including an outfitter.

Once I got into Front Royal, I caught a ride to Watermelon Park campground to spend an evening hanging out with Crispi and Mayo, two hikers who decided to aquablaze the Shenandoah River instead of hiking through the park. This was a cool campground, and the staff at the camp store were super friendly and helpful. Elizabeth, who works there, offered us free tubing AND free rides back to Front Royal the next day. Trail Tip: if you decide to aquablaze, go the extra day past Front Royal and stay here – camping is only $10, they will buy your canoe back without hassle, and you can hop back onto the AT at Bears Den Hostel to keep trucking north.

Back in Front Royal, I spent an afternoon and evening hanging out at Lucky Star Lounge, which I highly recommend to any hikers stopping through who want a cold drink, good music, and a fantastic meal. Trail Tip: the entrees are a little pricey but the burgers are very reasonable, delicious, and HUGE. 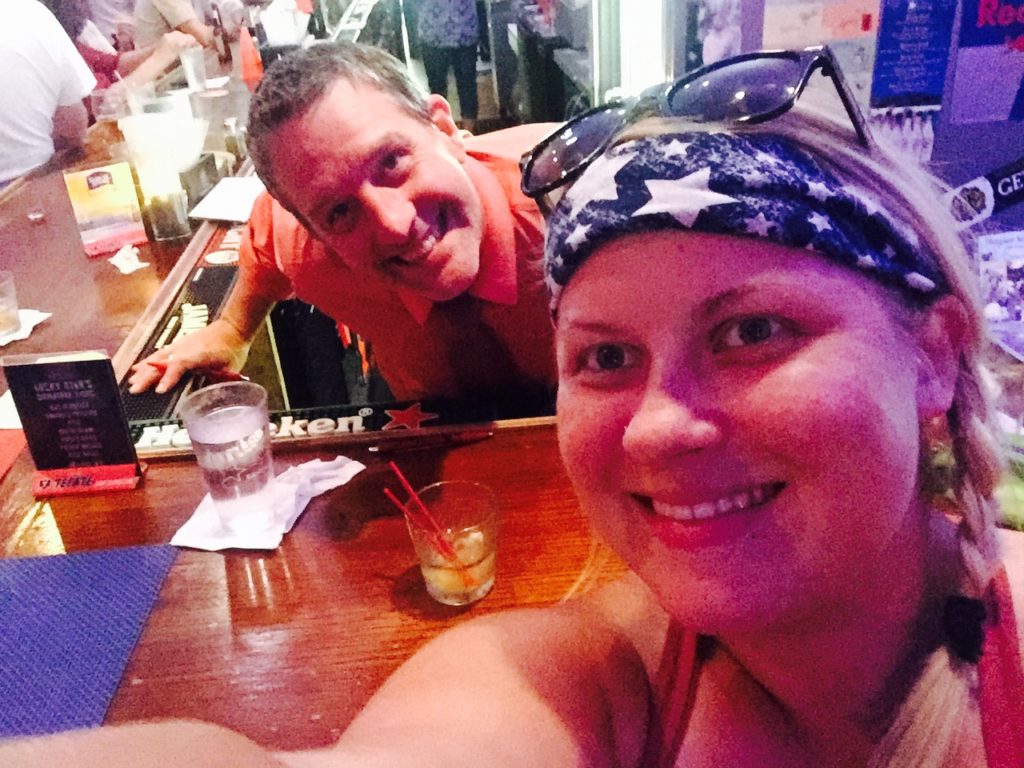 Hanging out with Trevor, who is from England and is one of the owners of Lucky Star Lounge.

While at Lucky Star, someone paid not only for my appetizer and meal, but a separate person paid for half of my drinks. The hospitality was exceptional, they WANT hikers to come in, and they had live music. What more could you want? 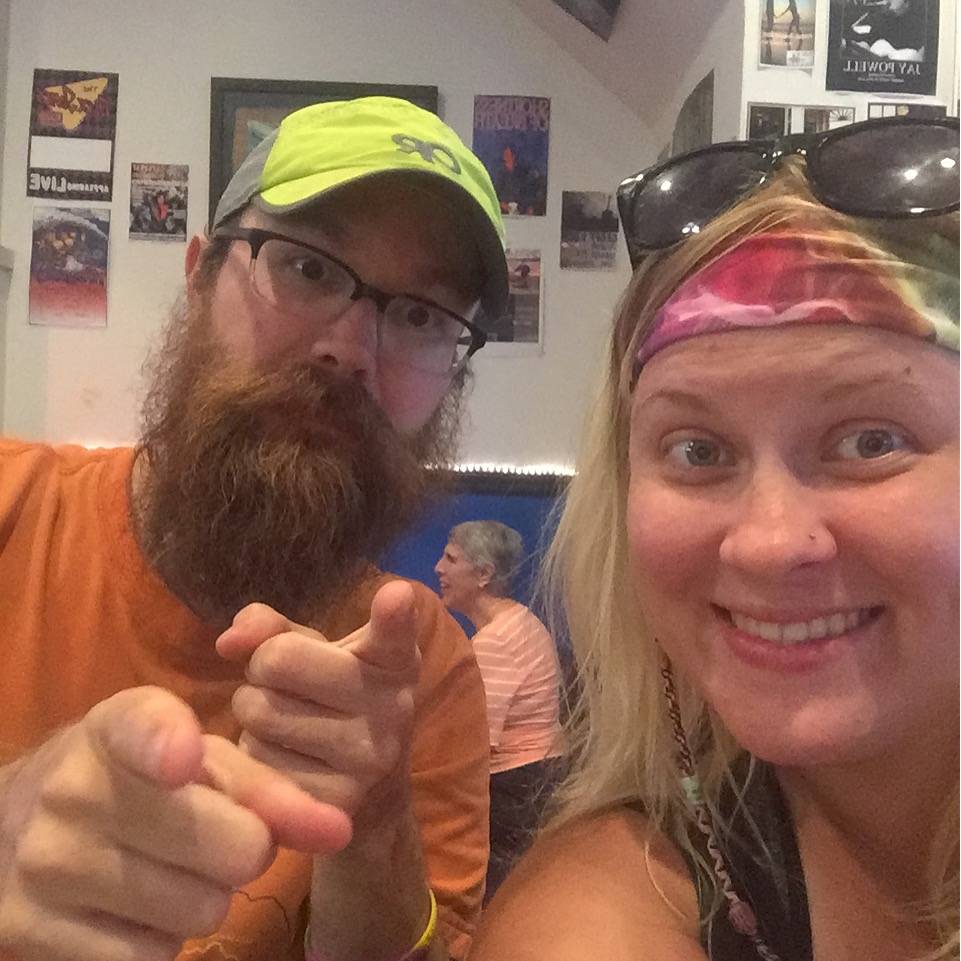 My first trial of the section was that all of my previous hiking partners (Longspoon, Silly, and Wildcard) left trail in Waynesboro. I headed into SNP without them by my side, which was extremely daunting. Thankfully, I had the group mentioned at the beginning of this post to keep me company for a couple of days. I was also reunited with Cold Turkey who I actually met on a section hike in Georgia earlier this year, and spent some time hanging out with Dr. Koolaid and Iron Butterfly (an older lady who is hiking to raise money to end elephant poaching).

Enter second trial… On top of a mountain my 3rd day into SNP, my body decided it hated me and started the painful, excruciating process of ridding my uterus of its lining… Aka menstruation. I’m not even supposed to have periods, let alone start one when I did. I blame it on the increased exercise, but regardless, here I was stuck on a mountain without ANY supplies for dealing with this predicament. This is why I had to hitch to Elkton on day 4, and subsequently why I spent a zero and a nero at Opens Arms (abdominal cramps and backpacking don’t go well together, in case you were wondering).

Trial #3 was basically a repeat of trial one: because of trial two, I again got separated from the folks I was hiking with. I went 4 days without seeing another thru hiker other than Iron Butterfly. By now, Longspoon was back on trail but hadn’t caught up yet. I thought Tippy Toes and the others had gotten way ahead and I forged on, pushing hard to catch up, only to find a couple days later that they were actually BEHIND me. I spent nearly a week completely alone, with no one for company at shelters at night except a handful of southbound section hikers each day. This has been the hardest thing for me to deal with. I enjoy hiking by myself, but I crave the companionship of interacting with other hikers at the end of a long, hard day, and I was in desperate need of seeing a familiar face (which is why I went through the trouble of going to Watermelon Park to see Crispi and Mayo, mentioned above).

Trial #4 was that, on my next to last day in SNP, I stopped at an overlook to snap a photo and when I turned to leave, stumbled and fell on the pavement, seriously rolling my right ankle, which resulted in a sprain (non-diagnosed but I’ve had enough sprains to know). And this is why I spent a nero, two zeros, and now another nero in Front Royal. 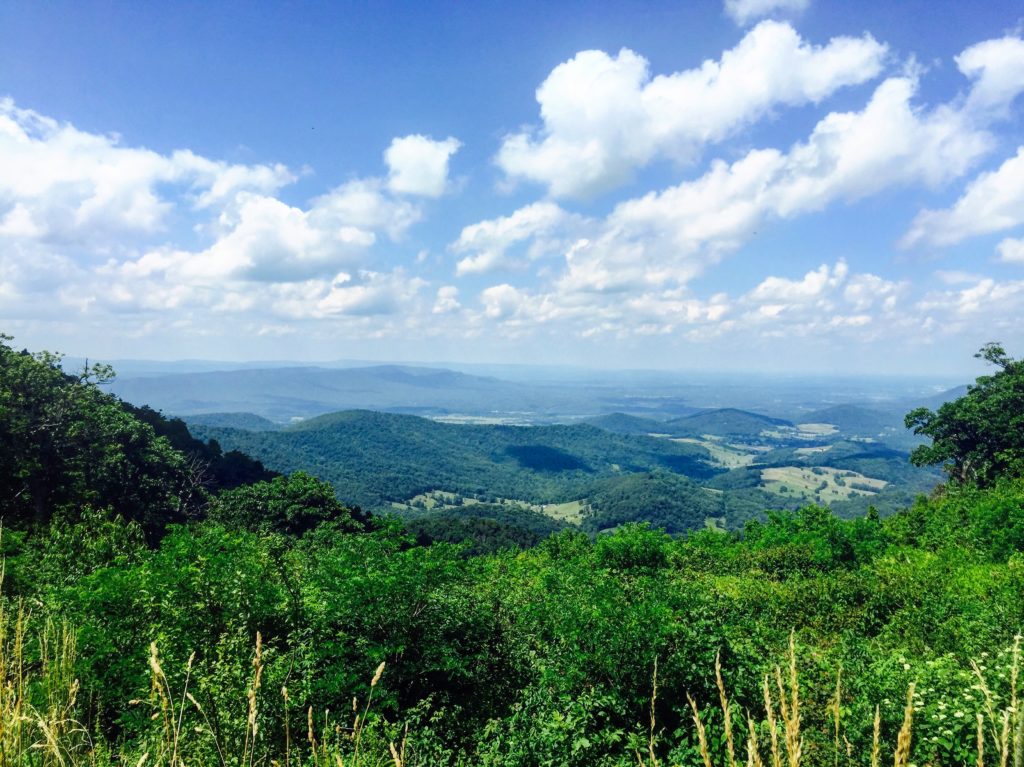 The view from Little Hogback Gap, the photo that wrecked my ankle.

I’ve had a lot of emotional highs and lows, but the mental fortitude is there for me to keep pushing on. The weather has been hot and humid, which keeps my energy level in the dumps, but hasn’t been terrible overall. For now, I’m back with Longspoon and hope Silly will return to trail within a week or so. Also hoping to get into another bubble of NOBOs and meet some more people now that I’m out of SNP. I’m writing this update from Mountain Home Cabbin. I won’t be sleeping here, but this place is awesome and I highly recommend it! Super cute little cabin with bunks and lots of other amenities. 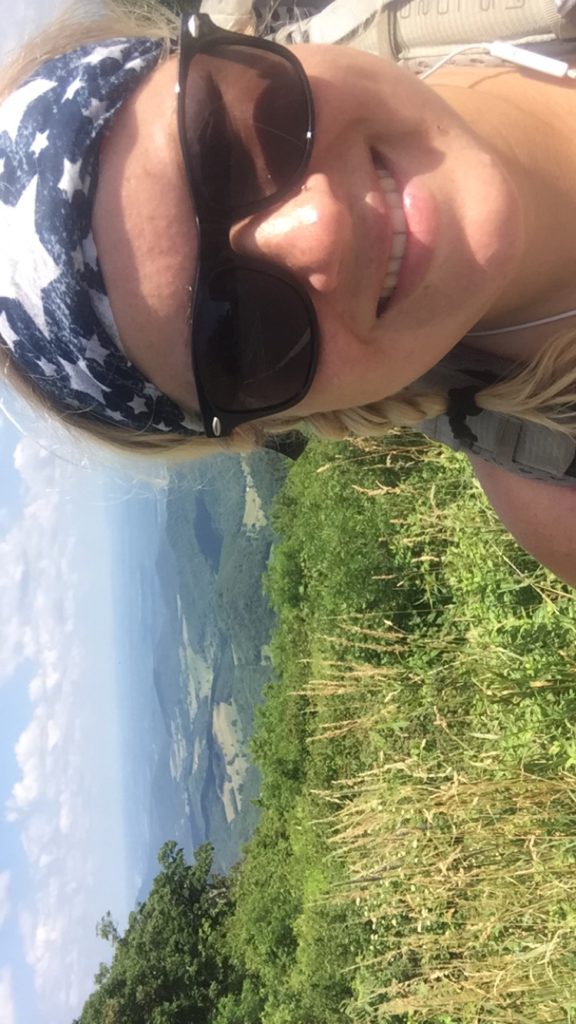 Staying positive (or at least attempting to).

Next stop: Harpers Ferry, WV! I’ll finally be in a new state!!