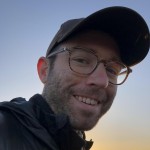 Not Your Average Trail Magic

Last night, my wife, Lauren, and I slept in a bed. A large one. Beneath a warm comforter. Our heads atop pillows. We hadn’t planned on this luxury. Our lengthy spreadsheet, the thru-hike plan we devised and revised over the course of several months, dictated a different kind of night out under the stars near Tray Mountain Shelter. But yesterday we were lucky. We were treated to a kind of trail magic we wouldn’t have expected, an overabundance of generosity we will carry the memory of to Maine and, no doubt, beyond it, as we slip back into our normal lives.

We had just descended Blood Mountain. For us, it had been a short day – ten miles hiked from Wood’s Hole Shelter to Unicoi Gap – but the crawl down the backside of Blood had our knees not begging for but cordially requesting a rest. Waiting in the lot across the highway, grilling meats and greeting hikers, were three members of the Thompson family: Art, Jean, and their son Brian, a former thru-hiker. They had driven from their homes to Unicoi Gap, where they annually gather to deliver trail magic.

They had set up at 7 a.m. and had already seen a few early birds come through by the time we reached them. They insisted, as all good trail angels do, that we eat and drink as much as we like (We both had hot dogs with bacon. I had an early beer; Lauren had a soda.) and that we find a seat in the ring of collapsible chairs they had put out for us hikers to rest in.

We devoured our food, and sitting under the sun, mustard-painted paper plate pinned under foot, a beer in hand, I talked to Brian, or Bow-tie, as he was known on the trail. He asked the typical questions one thinks to ask of A.T. hikers: our status (thru-, section, etc…), where we were from, what we had done before the hike. Our answers weren’t as practiced then as they are now but have remained largely the same: thru-, Seattle via Texas, and so on.

We asked him if he had hiked the trail, which he had, in 2011. He shared a few things about his experience and the ways in which his life had changed in its wake: a new career, finding his trail community. We shared what we could about our hike, as early as it was (and still is), namely that the weather hadn’t been bad. He warned us, jokingly – he doesn’t believe it himself – that if you have an easier time in Georgia, you’ll have a harder go of it in the Whites (and vice versa). But being slightly superstitious, I ruminated on what that might mean for us later on, willing we make it.

He asked us where we were headed, how far we planned on hiking that day. I told him we were hitching into town to pick up a resupply and that we might find a cheap motel to hole up in if we felt like staying. Hearing this, he leaned in and then, as if he had known us for years, casually extended an offer to host us at the Helen home he and his parents had rented for the weekend.

That, my dear reader, is not your average trail magic.

In similar situations, when a decision needs to be made, I tend to wait until Lauren has answered so I know to answer accordingly but in that moment I didn’t need to hear it; I knew she felt the same way. It was an easy yes to give.

Still needing to pick up a box in Hiawassee, we found a ride to get us the 12 miles to town, and, after a short drive and a visit to the post office, began the walk back, thumbs out, waiting for a hitch. It arrived a few, short blocks later in the form of a Hiawassee patrol car. For the first time in our lives, Lauren and I were seated in the back of a police cruiser and couldn’t have been happier. Our driver, the officer whose name I regrettably cannot remember, drove us back to Unicoi Gap and having pulled in close enough for everyone eating to see, came around to each locked door to let us out. We had arrived in style! Walking toward our trail angels, we were unable to restrain our laughter – to have arrived by cruiser, in sight of confused and slack-jawed fellow hikers, and to have experienced the fullness of trail kindness in a single day was good reason to laugh and to smile wide.

We’ll be hard pressed to find better magic and we can’t thank Art, Jean, and Brian enough for making it happen. They were extremely generous with their time, their resources, and went above and beyond to provide us a room in their home away from home.

From Lauren and me – thank you!

And may God have mercy on us in the Whites.

Hello, internet neighbor! You may know me personally and have arrived at this blog hoping to keep up to date on my thru-hike or you happened upon my blog randomly because you 1) have an interest in the Appalachian Trail or 2) mistyped a google query and wound up clicking my link out of curiosity. Regardless, welcome! My wife, Lauren, and I are two relatively young (30’s) outdoor enthusiasts who, two years ago, decided to take on the Appalachian Trail. Since then, we’ve done everything within our means to make it a reality. Today, we’re doing it and you - you lucky dog - can follow along! So, thanks for stopping by to read and share in this experience with us. Whether you came knowing what you’d find or arrived at the site by accident, we’re excited to expose you to the wonders of the A.T.!