Ode to a Nalgene

One moment I was with my kind, in a factory of assorted colors including but not limited to the rainbow.  There were hard ones and soft ones, big ones and small ones, but we were all from the same family, we all had the same dreams. 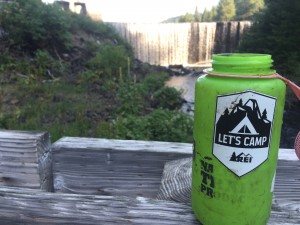 We wanted to be used, traveled with, thrown, filled, emptied, twirled and until we couldn’t anymore.  I was placed in a dark box separated from my kind, uncertain what would happen to me, but hopeful the fate that befell me would live up to our hearty expectations.  In the dark box I sat for a week, as I was placed on planes, cars and left on a doorstep. When I awoke from my slumber, upon being unpackaged and taken from my box, I sat in my new owner’s room.  Occasionally he would take me out, to frisbee or work, but I never felt challenged.  I thought about those goals we talked about in the factory, how bold we all imagined we would live, but in the end I was to amount to nothing. 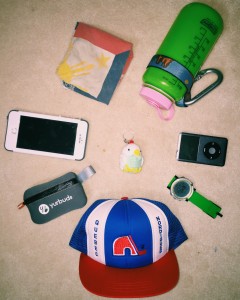 Lounging with some friends before it got crazy

Then one day he introduced me to Backpack, and I knew everything would be different.  Owner had many backpacks around his room but this one was different.  He was huge in comparison, at least double the size and capable of holding at least 50 of me.  Then other new friends started coming in the mail just as I did.  Owner would sprint in the room and take out big knife, and rip so many new friends: tarp, dry bag, stove, light jacket, synthetic jacket; every day a new friend.  He even gave me a new pink hat (I thought it was a little loud, but he isn’t one to be trifled with) and some badass tattoos. For two months backpack and I sat together, as owner put each new friend into backpack until one day, backpack seemed full.  I was sad; although owner had introduced me to so many friends he put them all inside backpack.  I could hear them muffled, laughing late at night, talking about what was to come, the savvy veterans informing the newbies but through backpack I couldn’t nail down specifics.  Then one day all of us were placed into a larger bag and that was the day backpack looked at me and said “everything is about to change.”

I didn’t know this yet, but during this entire time, backpack knew what was happening, he had played this game before, and although he wasn’t there the whole trip last time, he said that once we started I would understand.  When owner took us outside of the bag the landscape was strange, the heat was dry, and everything was different.  He laid us out on his bed, gave us one last look making sure the whole party was there, he even introduced us to sun hat and small knife and then we were all placed in our respective positions.  The next day what backpack said could not have been truer, I was filled and emptied four times in that first day, and suddenly I knew why owner bought me first. 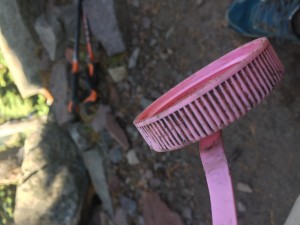 My pink hat, never to be clean again

I saw things in one day that exceeded what everyone in the factory had in mind.  No longer was I the one who was bored, but it was tarp, quilt, and stove that were bored now.  Their inner pack babbling no longer mattered to me, their reality was completely different than mine.  I got dropped, scratched, dunked, overheated but none of it mattered, it was all part of the experience.  It didn’t matter how dirty I got, it just mattered that I got dirty, that I lived the life that all of us said we wanted to live.  Every night I would see tarp and quilt and tell them about what I saw, I would say how the sun made me so hot that I felt like I was burning, distant mountains becoming the next obstacle.  While they could understand what I was saying, they couldn’t fathom the depth of my words, their knowledge was only that of highlights, an hour drying in the afternoon sun, a misty morning, a cloud filled night, a mid-day siesta; they couldn’t fathom what it is truly like to be exposed day in and day out.  After a while I gave up telling them my story, as much as I wanted to share they couldn’t understand owner walking seven hours straight without a break, the daily struggles; I told them highlights but to understand every aspect was too hard.

Soon owner met others, and they had backpacks and jackets too.  Some were older, some younger, some more experienced, some less but they were all headed the same place as me.  I met other bottles but none of my kind- Gatorades, and Powerades and Smart Water Bottles. They became my brothers in solidarity.  I didn’t have to explain what the day was like to them.  They understood what I was going through completely, despite the fact that they were very different from me and we would have never met in real life, here we were side by side for days on end in “real life.”  Laying down by creeks and sleeping under the stars, they were there to fill the void left from being away from everything I knew.

My friends from inside the pack soon changed as well, sun hat got replaced by baseball hat, rain jacket and camp shoes left, a new guy tent inner talked endlessly about how useful he was going to be when the mosquitoes came.  They all kept each other company inside backpack but to me they were merely just distractions, another group that I couldn’t get close to because they weren’t here to do the same thing as me.  Whatever the reason, they didn’t start in the desert, or they weren’t going to be out there for four month;, they couldn’t understand what I was going through day after day. 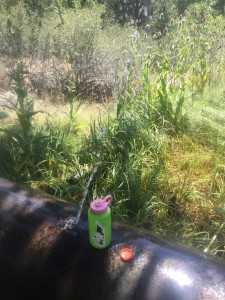 Eventually vast desert and endless heat gave way to stunning mountains but the struggles remained the same.  I changed, got dirtier, nicked up, less appealing, but I didn’t care because the change represented not who I was, but who I became.  One day, after months of getting everything nature could throw at me- hail, snow, heat, rain, wind, and cold, owner put me down and stopped walking.  For two hours backpack and I just sat there in the middle of the woods staring at this wooden monument.  Without context it was seemingly meaningless, it wasn’t as pretty as the deep valleys or high peaks or dense forests or granite bluffs, but for some reason this was the place where owner just sat and stared with no urgency.  Where one mile earlier I felt like I was in the midst of a great adventure, now there was a shift and I soaked up the sounds like I hadn’t in 4 months.  Felt the wind blow at my sides, heard an afternoon thunderstorm and knew that these moments were soon becoming part of a fleeting memory.  Three hours later, I was placed in a car, and unlike every other time, we did not get out just a little down the road.  This ride was different, longer and once again, I got placed in a bigger bag. 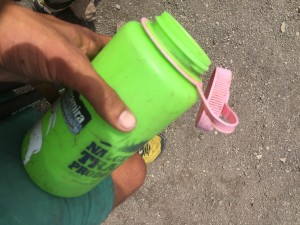 A selfie with owner

Now I have been returned to my stationary position where I was so many months before.  While the surroundings feel the same, I can’t help but feel I’ve changed; the tattoos owner put on me wore away from the rubbing, my loud pink hat now has a natural stain of brown, and all my measurement markings are rubbed off.  When people look at me, they can’t tell what I’ve been through; they see the scrape and think that I must have fallen sometime when the truth is that I got the scrape at Muir Pass jumping between two rocks as I crossed a freezing cold river at 11,000 ft.  Or that the dirt stains are from the endless days of dryness where dirt would be kicked up for the whole day giving everything a distinct shade of brown.  Just like with my friends inside my pack I keep the trail to myself, it becomes an accomplishment I can’t share because while the fact is I did the whole trail, it isn’t something they can really understand.  They see me the same as the bottle who goes to Europe to tramp around, but the fact is everything I saw and did I worked for; four months I worked for the chance to bask in my accomplishments.  So now I sit and blend back into the room in which I sat before; backpack is gone, he was replaced for a newer smaller backpack and occasionally I tell him bits and pieces about what I’ve been through.  He enjoys my stories, looks at me like I am some battle hardened veteran, and while I love to look back and think about what I went through, what the old backpack went through before me, I am constantly waiting for that day when he is full and I can turn to the new backpack and say “everything is about to change”.