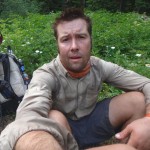 A Side Trip off Trail Along the James River

Some folks will depart the trail to see nearby places such as Washington, D.C., or New York City. After crossing the James River I turned east and didn’t stop until I was at the Atlantic. 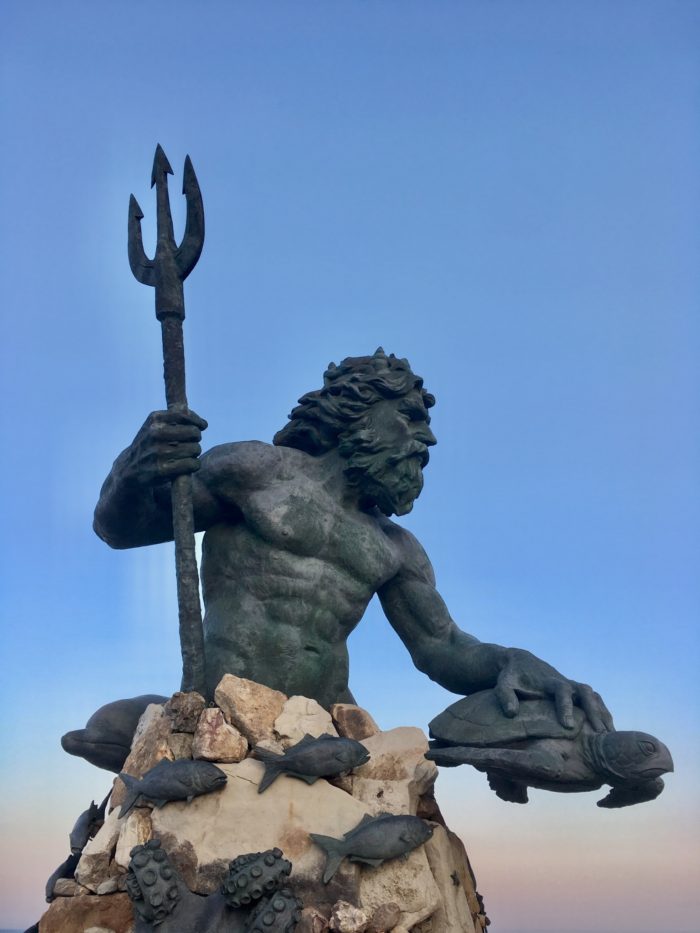 It was nearing the weekend of Trail Days but I had had my fill of Damascus. I opted out of the chance to listen endlessly to stories of hyperbolic bear encounters. I don’t much care anymore who had the worse weather in the Smokies.

In all honesty, I took my brief departure as my hiking partner of the past three weeks, Chomper, needed to be in Yorktown to begin her TransAmerica bike tour. So we went into Lynchburg, rented a car and paid the coast a visit.

Along the Blue Ridge Parkway

Coming out of Daleville at Blackhorse Gap, the AT touches the Blue Ridge Parkway and parallels the scenic highway for roughly 100 miles. There are areas where the trail and the road coincide, and when they do views abound. 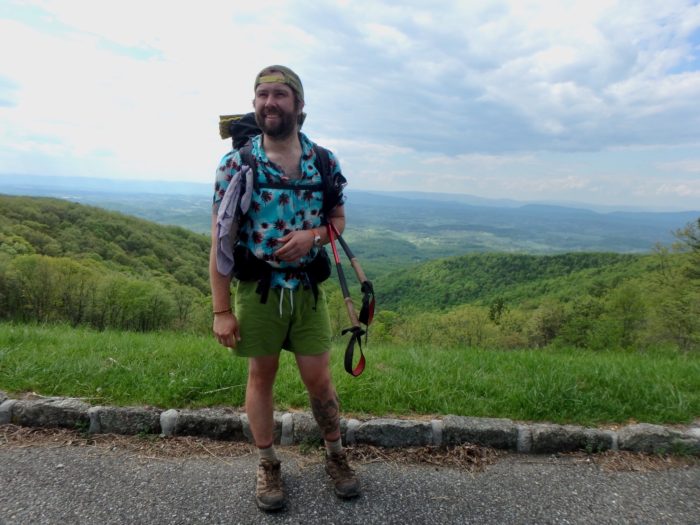 Kicking it on the parkway and scaring drivers as if I were wildlife.

Granted, it’s necessary to ignore the clear-cut swaths of forest that make such views possible. Moreover, anyone pulling over at the overlook will hesitate exiting their car when they see you sitting in the shade. Be not surprised if they hardly nod in acknowledgement as they peel away.

The approach of Apple Orchard Mountain was interrupted by a slew of hard thunderstorms, the heat and thick air becoming charged and bursting in the afternoon. Luckily, we were at the shelters eating snacks when that crucial moment occurred.

We meet two guys on the far side of Apple Orchard Mountain who were walking the Blue Ridge Parkway, deliberately. I’ve meet some kooky folks on the trail, but the idea of a 469-mile road walk baffled all within earshot. But it’s been done before, twice by the same guy. Walk on walkers, walk on. 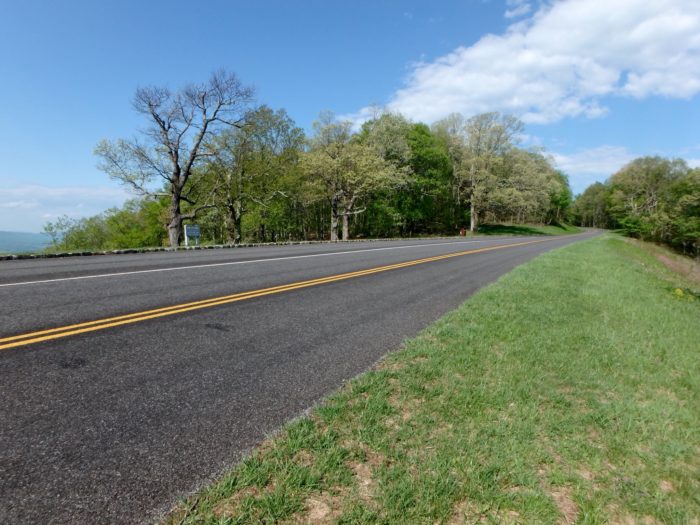 Chomper and I crossed the James River and got a shuttle and a rental car. Before we knew it, we were full of Dairy Queen and at Virginia Beach.

We met a friend from the Navy and the afternoon was spent watching beach volleyball and hanging out in a 1950s-era high rise, sharing sea stories while searching for our place in the world. 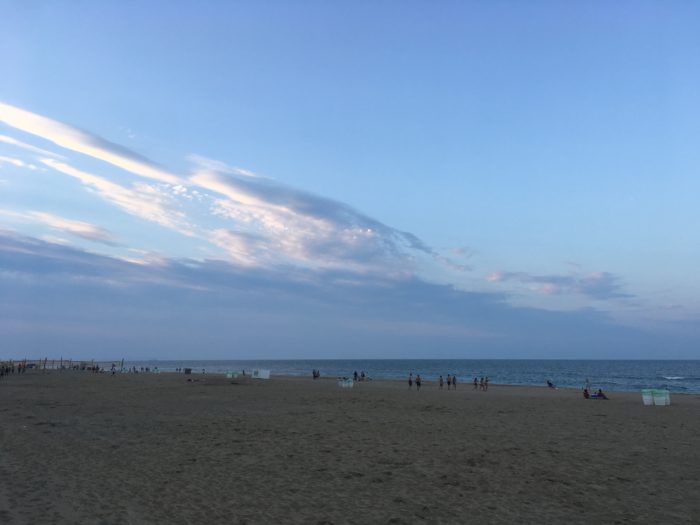 Later in the evening it became a small reunion of sorts, meeting both someone I served with as well as a reunion of my past. There was a glimpse into the possibilities of where my life could have been had the decisions been different. I can’t help but be both nostalgic and critical of my past, the trail an invitation to introspection.

The following day we were in Richmond, where I had the pleasure of watching Chomper basically throw her phone into a pool of rushing water of the James.

It was interesting for me to be in Richmond, former capital of the Confederacy. I say this as historical fact, a fact that Richmond proudly embraces via the steadfast presence along Monument Avenue.

But along my hike it’s been in every place I’ve visited that this historical reality stays alive. The monuments in Franklin, Tenn., and Hot Springs, N.C., the Southern Cross seen flying in Marion, Va., all remembrances of a complicated America. Coming from the Southwest, this is a social and historical dynamic I haven’t had to grapple with. I bring the topic up as a way of demonstrating the depth and complexity of this hike.

The dynamics of the South and North, the geographical significance of this footpath, my own personal walk toward freedom have been playing in my mind as I have my eyes set on Harpers Ferry, W.V.

I stayed a few days in Yorktown, Va, looking over the York river. I visited the Revolutionary War battlefields, neat enclaves of freshly mowed grass. The interpretive markers dotted the area and struggled to recreate the events as neat little rows of advancing armies. I can see why the war for independence and the Civil War get so much attention. As clearly defined fields of battle, the easily distinguishable enemies, times when war was tidy and rational. A struggle where the cleanliness of victory is demarcated by marble monuments. 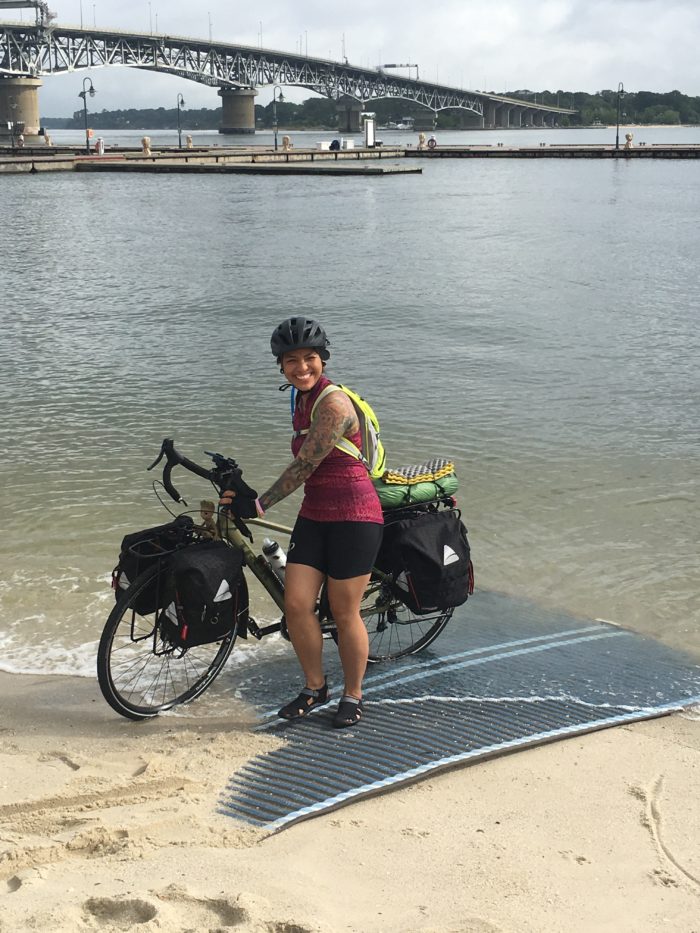 Chomper traded her boots for a bicycle. Yorktown, VA.

Chomper rolled off to the west on her bicycle and I slowly made my way back to Lynchburg, pelted by rain on the interstate. It was a dreary drive back to the trail, but once I saw the bend of the river, the hiker trash in the gravel parking lot, I knew that this is my journey, my saunter north.