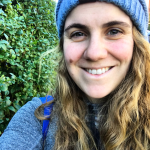 Hi all, checking in from the Top of Georgia Hostel, which is the cutest hostel! The staff here makes you feel like family, it is a joy to stay here–Highland Dave even gave all three of us an impromptu foot massage to ease our muscles.

The first couple weeks on the trail have been challenging, both mentally and physically. Only three days after starting we had to take several days off for a couple reasons. First, our first night I woke up to guns going off–yes, GUNS! Apparently, there is an Army Ranger training ground near Springer. That would have been good to know right off the bat, darn near scared me right off the mountain! Then, one of our teammates tweaked her back, and we had to get off for her to rest. Shout out to Ron’s Appalachian Trail shuttle for the pick up, tootsie pops, and laughs! After two nights in a hotel in Gainesville, the forecast for all of northern GA showed snow, snow, and more snow–not to add the temperatures in the teens and below. And just to add to this, all three of us got a cold! 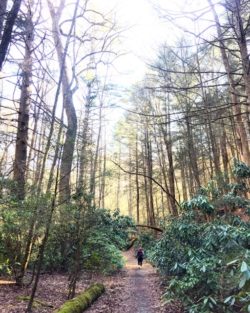 To say these days off hurt my spirit would be an understatement. Only a couple days on the trail–only a few miles into the hike and boom–we have to take days off for injury, weather, and illness. Talk about disheartening.

However, after almost a week off, my team decided to have me push on 11 miles from Woody Gap to Neel’s, while they gave their colds one more day to recover. I must say, that felt good, it felt good to push double digit miles after doing none for so many in a row. It felt like being on the trail!
After a night at Blood Mountain Cabins, a shakedown at Mountain Crossings, the team was back! Although after taking so many days off the trail it was like starting completely over. This is where the mental game is tough. We were technically on day ten on the trail and we are only around mile 35. What the heck? People are passing us–flying by, but our team collectively needed to go slow, which means I need to take it slow.

Patience is a tough lesson, but a necessary one.

The days were spent up and down, up and down, the days kind of blend together. So far, my favorite part has been walking, which sounds silly, but is true. I love the very action of walking, it feels so freeing and so right. 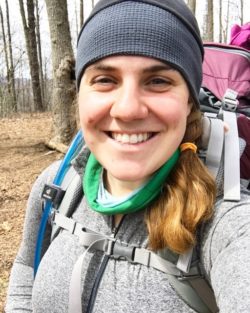 The worst part has been the nights. Chilly aside, I have yet to trust the woods at night. Every leaf that rustles in the wind I just assume is an animal. The darkness gets eerie and I wait for the moon to come up so I can have some idea of what is going on outside of my tent. We have yet to stay in a shelter, they have been either too full or our miles have not been align with the shelters. We have become pro stealth campers and quite fond of the campsites that are scattered throughout the trail.
I would be lying if I said I wasn’t ready to get out of Georgia. It will be so nice to cross one state off the list, and move forward. But then again, North Carolina will bring its own struggles and triumphs. The hardest part thus far is the desire to compare yourself to other hikers. On one hand everyone refers to “Hike Your Own Hike,” then they turn right around and say “So where did you start today? Where y’all trying to get to tonight?” It seems as though everything is in comparison, which is not helping me mentally. The trail community is great, but I guess Georgia is a time where most people work out their nerves & anxieties, as well as their bodies & the early stages of trail legs.

In other, more lighthearted news, I have a trail name!!

Pig-Pen. On our one hot day on the trail, all the bugs were zipping around my head whenever I stopped for a break. It was getting so annoying and I kept swatting and swatting and swatting, and nothing. Eventually one of my teammates said “your trail name should just be Pig-Pen with the cloud of bugs around your head like Pig-Pen’s dirt.” I shrugged, then thought about that name for the next day… hm… Pig-Pen, I actually kinda like that! So, I am now Pig-Pen (one of the most beloved Peanuts character, I must add).
Well, there are high hopes for getting out of Georgia soon. I am ready to see what North Carolina brings, and those mystical things called Trail Legs to kick in! Spirits feel high today, and the community here at the hostel only bring it further up and up. 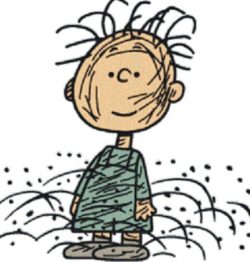 Hey I'm Alli! A native Marylander residing in New Haven, CT with my boyfriend and our rescue cat, Penelope. I am a recent graduate of Yale Divinity School and an alum of the University of Pittsburgh. I am hiking the AT NOBO with two other gals, Sydney and Shelby! I love a full glass of cheap champagne, binge watching HGTV, and sauntering in the woods. Hike on!