My wife dropped me off at Pearisburg after my zero. Saying goodbye was like taking off a bandaid. We all know there are two choices, the quick yank or the slow lingering tug. We choose the later. Being away from her for so long is probably the toughest part of the trip. I hiked up to Rice Field Shelter. This is by far my favorite shelter thus far mainly because of the open bald with its expansive views, but it was to early to stop. There were several camping spots on the ridge beyond the shelter. I was shooting for one of these. The wind howled across the ridge. One failed attempt left the tie ropes of my hammock and the rainfly a horrible tangled mess and me looking for a spot more sheltered from the wind. Eventually I huddled next to a rock and untangled my rain fly. I strung the fly between two trees about two and a half feet off the ground and anchored both sides with several rocks. I slept, but I couldn’t tell you how. Tylenol PM?

The next day I walked to the Warspur Shelter and had a nice talk with Crashes and Holcomb, a couple of guys about my age. They have about 600 miles under their belts and disappeared over the horizon the next day. I’m still getting my legs under me, but their 18 mile day showed what may be possible in a few weeks.  There are some beast out here!  Tattoo Joe is planning to do a NOBO AT thru and then hike the CDT southbound.  He was doing 30+ the day I saw him.

I managed to pull off my first real fall on the way to Warspur.  It was a classic trip to face plant.  Luckily I landed in soft dirt.  Did something to my right shoulder, but it isn’t painfull unless I do something crazy like reach for something.  It’s getting a little better everyday. 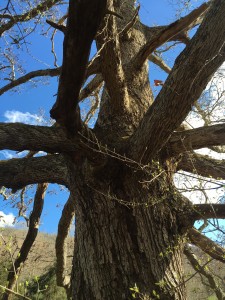 The next day, I only walked 6.7 miles to Sarver Hollow.  Followed that with another easy day to the Niday Shelter.  Not really feeling it these days.  The adrenaline rush of the start is gone. Now it’s just me and the trail.  It was interesting to see a new composting toilet there.  When you are on the trail you rarely see these improvements.  All done by volunteers!  I only noticed because it wasn’t there last year.  I talked to Old Grouse who I had met at Wood’s Hole last week.  He was going to camp a couple of miles down the trail to shoot for Four Pines Hostel the next day.  I, on the other hand planned to take 2 days to get there.  I wanted no part of the Dragon’s Tooth with the sun going down!

The view down toward Catawba

There were four other guys at the hostel.  Old Grouse was still there.  Otis, who really needs folks to do some sort of intervention on his pack which looks like it weighs a million pounds, and his trail brother whose trail name escapes me regaled the group with stories of dealing with an insane skunk.  Evidentially having a skunk crawl on your back while you are asleep causes a great deal of emotional distress.  I had met Otis and his buddy on my first day.  Flash 52 was there too.  I was a little worried that the party might continue into the night, but every one pretty much passed out at hiker midnight. 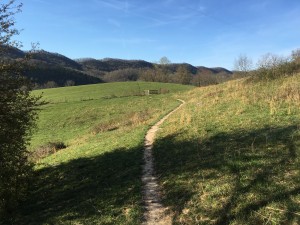 The next morning was beautiful.  I hiked through a series of open meadows that gradually climbed toward McAfee’s Knob.  I stopped for lunch at the Catawba Mountain shelter and met a woman who started her flip flop in Catawba that morning.  I suspect I will see more of her later on.  Her trail name is impossible for me to spell as its root is related to the Asian art of arranging furniture but sounds a bit like dysfunctional.  McAfee’s Knob did not disappoint!  I was really feeling it today and toyed with hiking 18 miles.  In the end, I stopped at a tad over 12 at the Campbell Shelter leaving 15 miles into Daleville the next day. 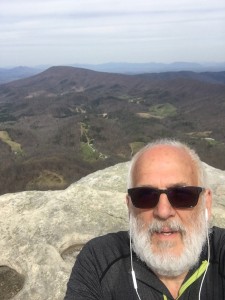 Required selfie on the Knob! 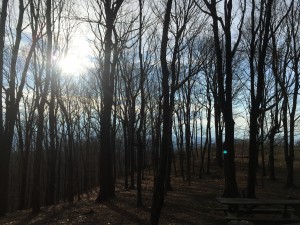 The sunrise from the deck of the Campbell Shelter

Lots of errands to do today!  I picked up my mail drop and mailed my hammock home, stopped at the outfitters for fuel and a ground cloth, did my laundry, hit Krogers to complete my resupply and finished my blog.  May take a nap.  Snow is forecast tonight in the mountains with a low temperature of 26 degrees.  Great day for a zero! 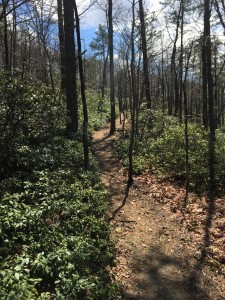 A section of the trail into Daleville. I can fly over this stuff! The lumpy bits slow me to a crawl.