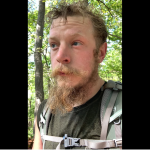 On Packing: A Treatise on Human Gear Acquisition

I apologize for the title but ask yourself this: Would you have clicked on this article if I had called it “My Gear List” or something similarly sub-par?

Now that I have your attention, it’s time to talk about…

I don’t claim to be a gear snob or an expert of any kind. This article is merely about a few things I have chosen to take on the trail. I mean, who doesn’t like to talk gear? I can be a bit of a perfectionist so there is a large possibility that this list will be in a constant state of flux until I leave for the trail, but this is what I have decided on so far for the main components of my gear.

Let’s talk about the most important part of all backpacking gear conversations: The big three. 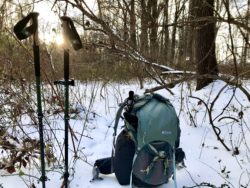 For my pack, I chose the Gossamer Gear Mariposa 60. Originally, I had decided to go with the Gregory Baltoro 65, which I loved, but at three pounds lighter, I thought that the Mariposa would be worth it. How do I feel about it? I really like it. This is chiefly because it is the most comfortable pack I’ve ever worn and you can really feel how light it is. It weighs just under two pounds and the difference is noticeable.

That stated, there are some downsides. Despite being only five liters less, the pack lacks a lot more space, and the brain of the pack, which doesn’t detach, is made in a way that anything you put in it needs to be relatively flat. It is a good thing I was good at Tetris growing up because it takes some serious maneuvering to fit everything into the pack. Luckily, the large side pocket is a perfect size for my tent, which brings me to part two of the big three. 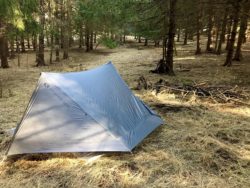 There are a lot of upsides to this tent. For one, it is extremely light. Weighing in at only 23.5 ounces this tent really shines. It sets up using only your trekking poles and proper line tensioning for structure and it is pretty strong. The fabric does seem to expand a little with moisture so, during a storm, the tension lines may need to be tightened periodically. Still, it is a great piece of gear and one I am quite excited to take with me on the AT.

Yet these two aforementioned pieces of gear are of little importance without the last part which ties them both together. At minimum one needs to have both a pack, a tent, and—you guessed it—a sleeping bag or quilt.

Though this is subject to change, I am currently planning on taking a Teton Sports Altos 0° bag. I decided on synthetic in case of its unwanted exposure to moisture and I actually like the bag pretty well. I’ve done a good bit of truck camping with it and have taken it out in the field a few times. It’s warm and seems to perform pretty well. That being said, I think it is around three pounds and I have been contemplating switching to an Enlightened Equipment Convert. Even so, I think this bag will do just fine, especially coupled with a Therm-a-Rest NeoAir XTherm MAX, which is the pad I have chosen to take. I have also coupled that with a silk bag liner that I acquired about 15 years ago in case of extremely cold nights.

My intention is not to repeat every single piece of gear I will be taking on the AT, but there are a few others I feel bear mentioning. Mainly, this is because, one, I am excited about it and, two, I have some commentary about my belief in their importance.

If you are looking for my full gear list, I will be posting it, and the link for it (which I’ll edit into this article), soon. 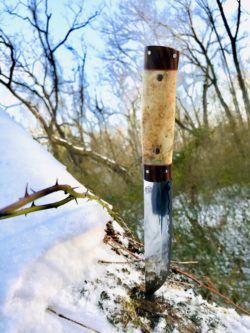 I had mentioned before that I am no gear snob but left out that I am a knife snob. I’ve been a knife-head since I’ve been a kid. I’ve been carrying a pocket knife since I’ve been three or four and got my first fixed blade when I was six. I have been carrying a Buck 110, ever since my grandfather gave me his for my 18th birthday and I never go anywhere, especially into the woods without one. For this trip, I’m going custom because I want to. While the vast majority of you probably won’t share the devotion to the lifestyle that I do, I should tell you why I think it is important to have one.

Firstly, they are just useful. From opening letters to cutting carrots, you always need a knife. In the field, I use it to carve for entertainment, make feathersticks for firecraft, temporarily replace broken gear, and a whole mess of other things. Lose a tent stake? Get a hardwood stick, carve a stake notch into it and a point into the opposite end and you have yourself a sturdy stake until you can replace the one you lost. I once even carved a sewing needle out of a mesquite thorn to repair a bag with a tear in it.

I recommend having one. You can listen or not, but I will be carrying one. Tip: since it’s on your belt it doesn’t count against your base weight.
*loophole*

I chose to take the Anker PowerCore 20,100. I’ve been testing it out and it works well. With the option to charge two pieces of equipment at a time and a gargantuan amount of battery life, it is well worth it.

The downside is, on the initial plugin, it takes a ridiculous amount of time to charge. I think it was around 15 hours for me. Consecutively, it isn’t as bad but you’ll still need some serious time to charge it back up after depletion. Think hotel time.

I’ll be spending an awful lot of time trekking in these things, so why not mention them? 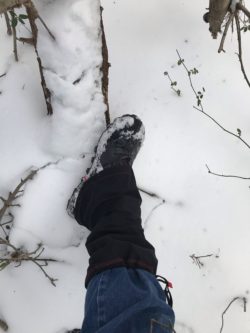 Everyone knows Altras are basically the gold standard so I won’t preach about their merits ad nauseam. I like everything about them except they don’t regulate temperature well when it is cold. That being said, the gaiters really help with that. They don’t hold dirt and clean easy, they are comfortable when you get used to the zero drop, and they hold up well.

As for gaiters, I know a bunch of folks aren’t bringing them. I’ve never hiked with them other than recently myself, but I will be taking them on the AT. I’m a believer now. They are good for temperature regulation, don’t weigh much, keep out snow and other nonsense out of your footwear, and are easy to put on and take off. They help keep your feet dry and that is enough of an excuse for me to use them.

The Sum of the Parts:

Maybe this will give you some ideas, maybe it will spark some good conversation. Either way, let me know if you have any thoughts or questions on the above matter.

For more of my content, please look at my author page: https://thetrek.co/author/paul-madigosky/