One Bra or Two

It’s so weird now that we are so close to leaving (a little less than 2 months now), I feel like I don’t have to scrimp on calories anymore. A year ago November, before I knew I would be hiking the trail, I started to cut back on calories and increase my exercise regime because I was trying to lose the 15 or 20 pounds I had put on in the last 26 years of our marriage. Now that I’ve accomplished that goal, it feels odd to be able eat anything I want –knowing I will lose it on the trail.

It’s almost March! The countdown officially begins–at least it feels that way because I’m starting to notify all my volunteer places that I will be done at the end of March and I won’t be back until September! I feel like I’ve been keeping a big secret for a long time–and I have! I wanted to make sure that we’d really be going, that I wasn’t still in the pipe dream phase before I said I wouldn’t be back for 6 months! I’m not one for wishing away my life, but I’m really eager for March to be over! I’m ready to go! 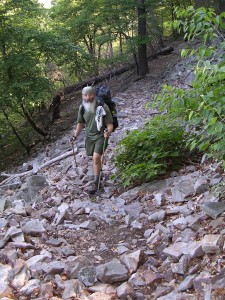 Backfire on the AT

One of the things I think about is the irony of the Appalachian Trail. The trail itself is more or less a constant–the same miles, the same paths, the same towns for everyone who hikes it. But every hike is different. Everyone who writes about their trail experience has something new to offer. Everyone comes to the trail with different needs and different goals, and everyone walks away with different lessons learned. It’s an amazing equalizer. On the trail, it doesn’t matter who you are or how much money you make because, while you are hiking, nothing matters but the hike.  For 2,185 miles we are all just hikers with a common goal. We are not our jobs, we are not our education, we are not our position in life. It’s a great escape!

Tomorrow is March 1st. Tomorrow we’ll officially be able to say, “We’re leaving next month.” For almost a year now, the departure date has been light years away, now it’s almost upon us. It’s hard to believe because the temperature was 7 below zero this morning and the snow is piled high outside our door. It’s hard to believe that in six week’s time we might be in t-shirts and shorts–at least in Georgia anyway. 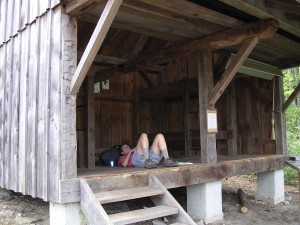 Spider takes a break on the trail

Last night I was looking around online and found  Hiker Box (https://www.hikerboxresupply.com/), an innovative site started by  a former Appalachian Trail thru-hiker, Kyrsten “Slayer” French as a result of her frustration over the limited or often overpriced food options on the trail. With Hiker Box,  you can order a variety of typical hiking foods and have them shipped to your next mail drop along the trail–all for a very reasonable price. This would make it possible for people to change their game plan regarding food as they go along rather than pack everything up in boxes 6 months in advance– or having someone back home packing them up and mailing them along the way. With Hiker Box, youcould order a box full of supplies online while you are in town A and have the box arrive in town B  when you get there several days later. I’m not sure exactly what the turnaround time is, but I think it was relatively short. Mel and I will probably just resupply as we can along the way. Even gas stations and convenience stores have foodstuffs that would work for backpacking–Ramen noodles, beef jerky, granola bars etc.–not good food, but adequate sustenance for the miles between towns.

We have been talking about this trip for almost a year now. The conversation tonight turned, not to shaggy toenails and whether to take nail clippers (previous post), but to bras; specifically how many, what kind and what color I should take. Seriously, we talked about bras. I was wondering out loud if I should bring one bra or two. I was leaning towards two because I’m taking two shirts– one to hike in and one to sleep in– so I was thinking I needed two bras and  Mel asks, “Do you really need a bra to sleep in??”

Mel: “If your bra is wet then your shirt is probably wet. Do you mean you’d want to put on a dry bra under a wet shirt?”

“Well, no. Not when you put it that way. But what about when we do laundry? I’ll need one to wear while one is in the wash. I don’t want to be flouncing all around in a cheesy laundromat.”

Mel: “You could put your rain jacket on over your shirt.”

Hmmm. I’m thinkin’ a water repellant raincoat on my sweaty skin in a hot laudromat might be worse than the embarrassment of flouncing around in a cheesy laundromat.

All this because we are lightweight backpackers and an extra bra is extra weight.

One bra or two?