Mile 1: At 6:00 in the evening, the shuttle from Shaw’s drops me off at the trailhead. My pack is weighed down with six days of food. The evening is hot and humid, more like summer in Maryland than in Maine. I pass the sign marking the edge of the Hundred-Mile Wilderness and start walking northwards through the trees. 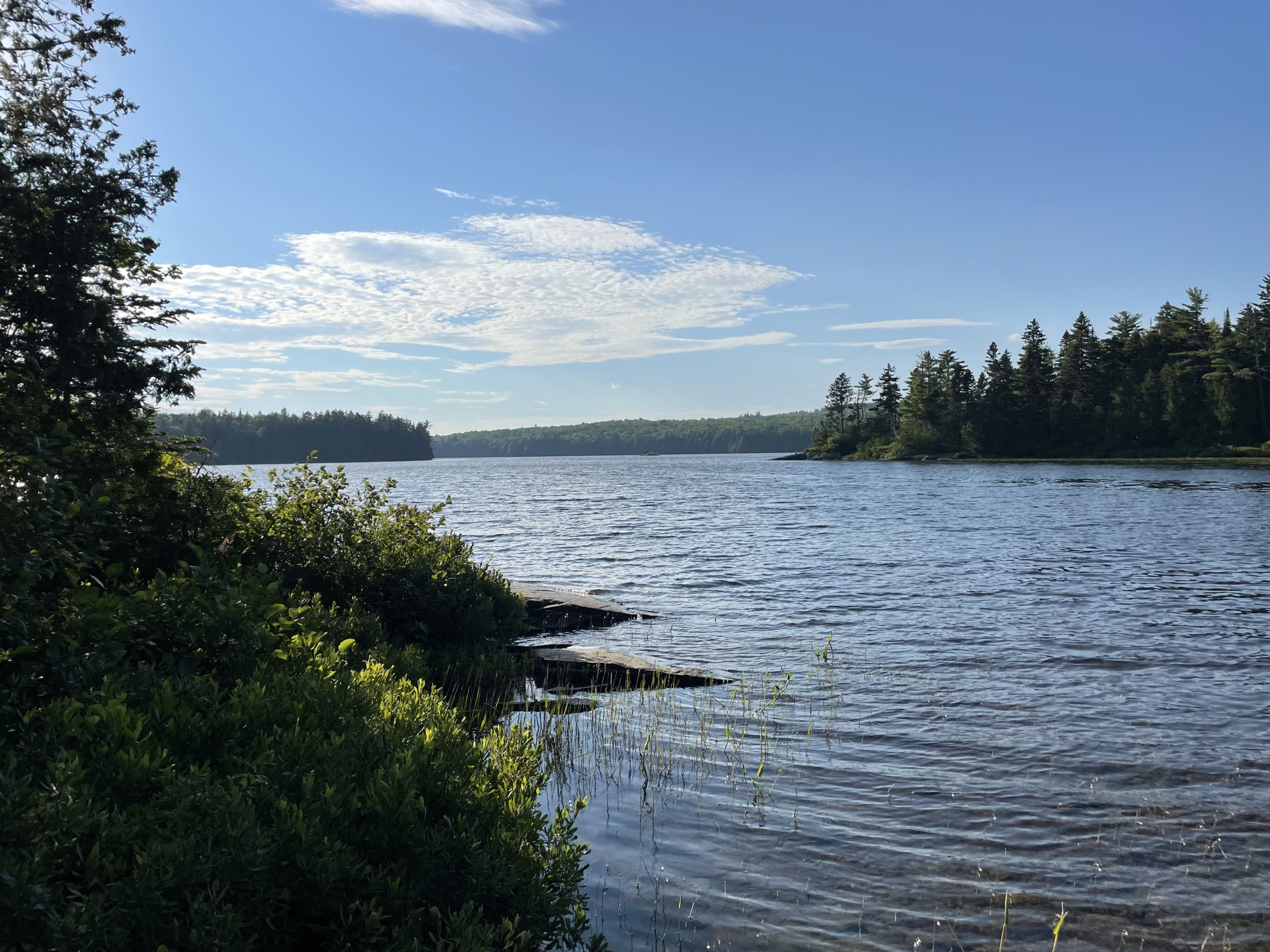 Mile 2: A small marshy lake opens up to my left, and the campsite I was looking for sits on a ledge overlooking the water. Loons call and kingfishers cackle in the dusk. Every now and then, as I drift off to sleep, I hear the splash of an unknown animal diving into the pond.

Mile 7: The roar of falling water announces Little Wilson Falls before I see it. It has carved a deep canyon into the slaty rock, tumbling down shelves of gray stone into the inaccessible pool below. I’m not sure how tall the cliffs are, but they’re many times taller than me. 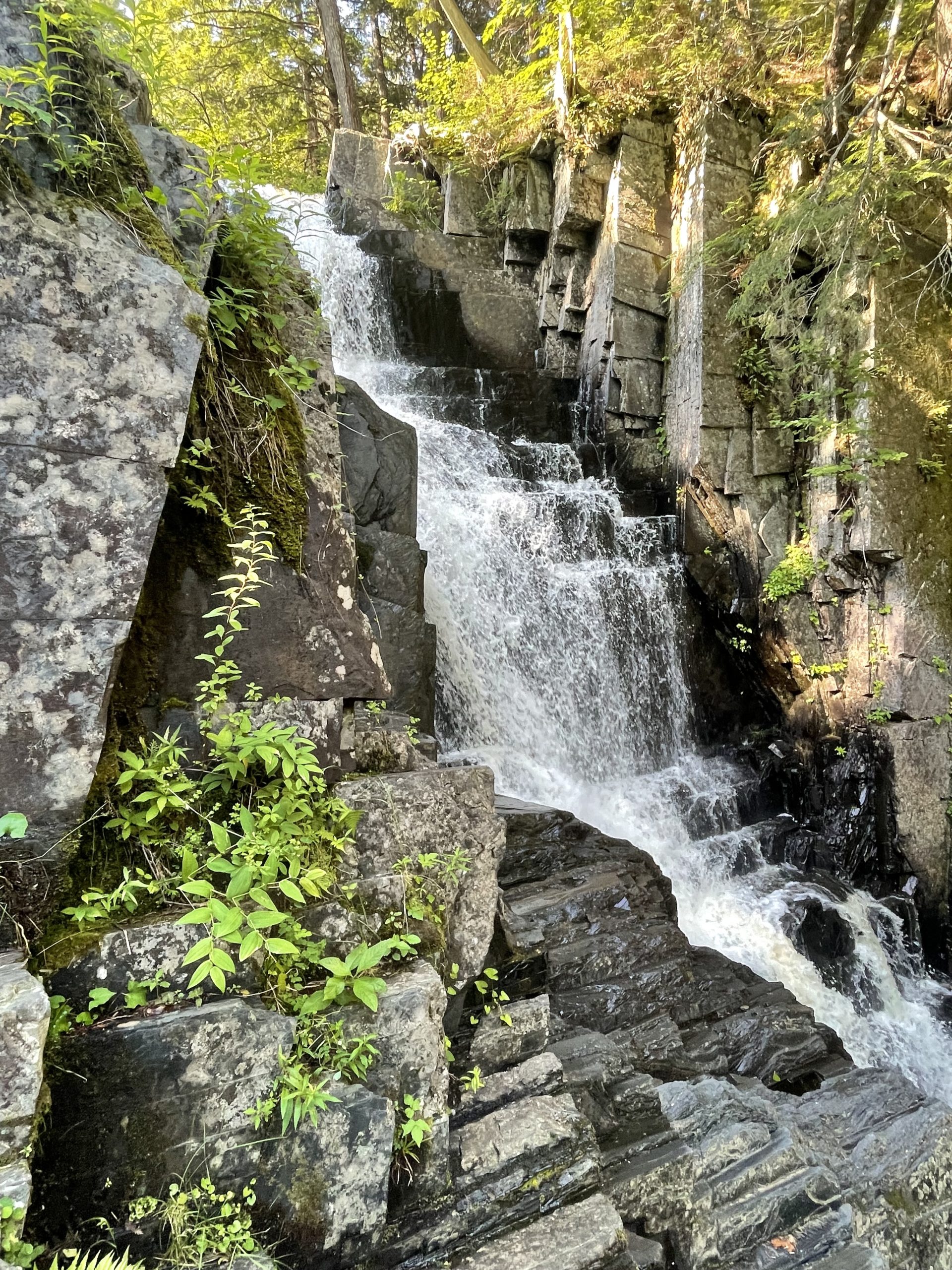 Mile 10: The stream in front of me is shallow but wide, and I take off my socks and shoes to wade across. As I pick my way gingerly over the slick rocks, a horsefly appears out of nowhere and tries to make a meal of my leg. I keep my balance, but nearly lose my poles as I swat it away.

Mile 14: The day has become intolerably hot, and the slate rock is sweating with beads of condensation. I cross a stream above a twenty-foot falls, and stop to swim and rest by the pool at the bottom. It’s only about chest deep, but that’s enough. I climb to a higher ledge and let the water fall around me. 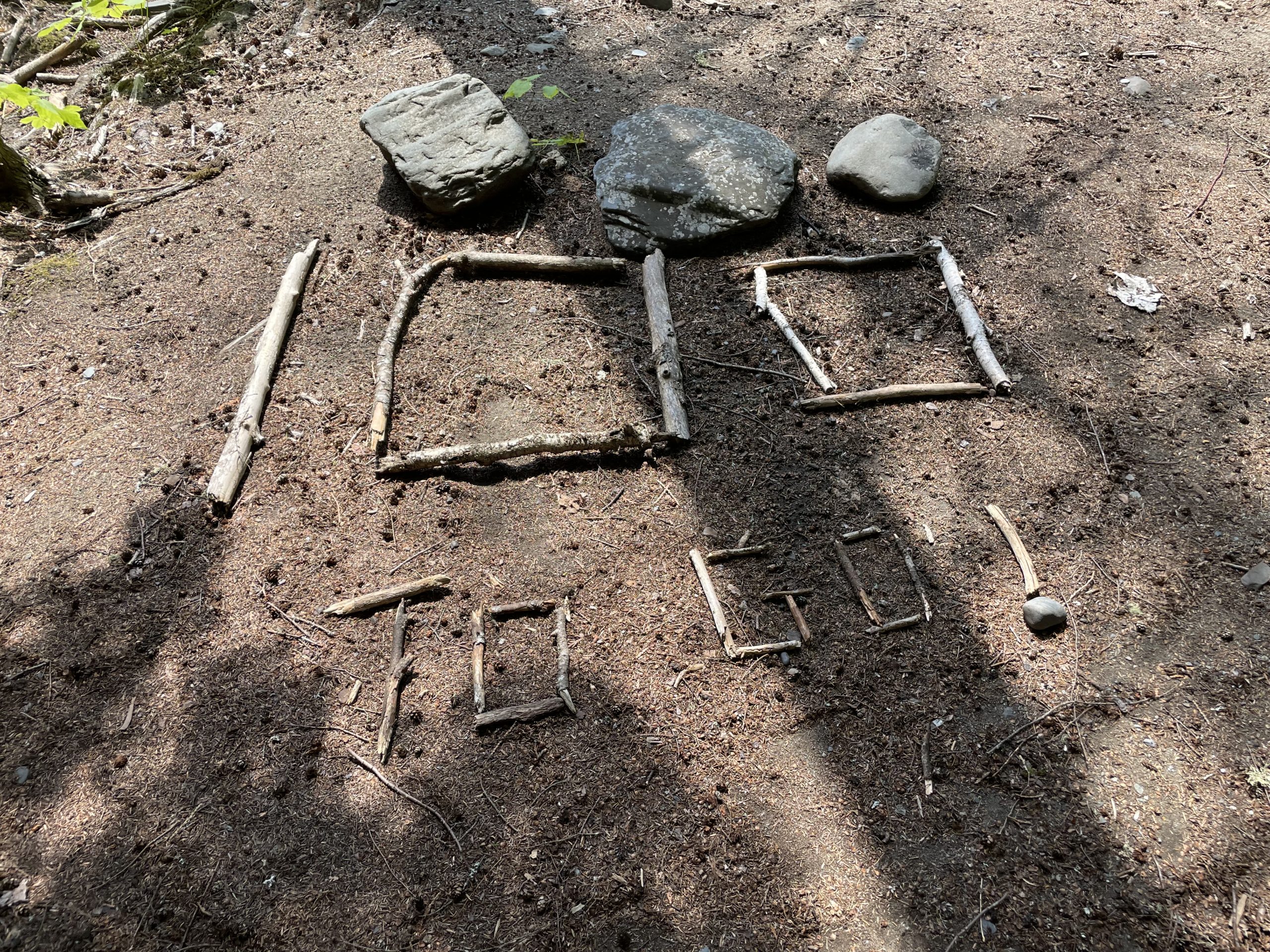 Mile 16: I see a familiar face coming towards me on the trail, and after a moment I recognize Thirty-Nine. I met him at Standing Bear in Tennessee, and we kept pace all the way through southern Virginia. He was named after the thirty-ninth book of the bible, Malachi. He says he’d been sick, and got off trail, and decided to flip north. He made it to Connecticut before he flipped.

Mile 18: After a steep climb of a thousand feet that leaves me drenched in sweat, I come to a bare slab of rock on Barren Mountain studded with pines. I look out and see a wild marshy lake far below, a hazy blue mountain rolling up behind it. As far as I can see there is nothing but green forest, with barely a hint that anyone has ever been here. 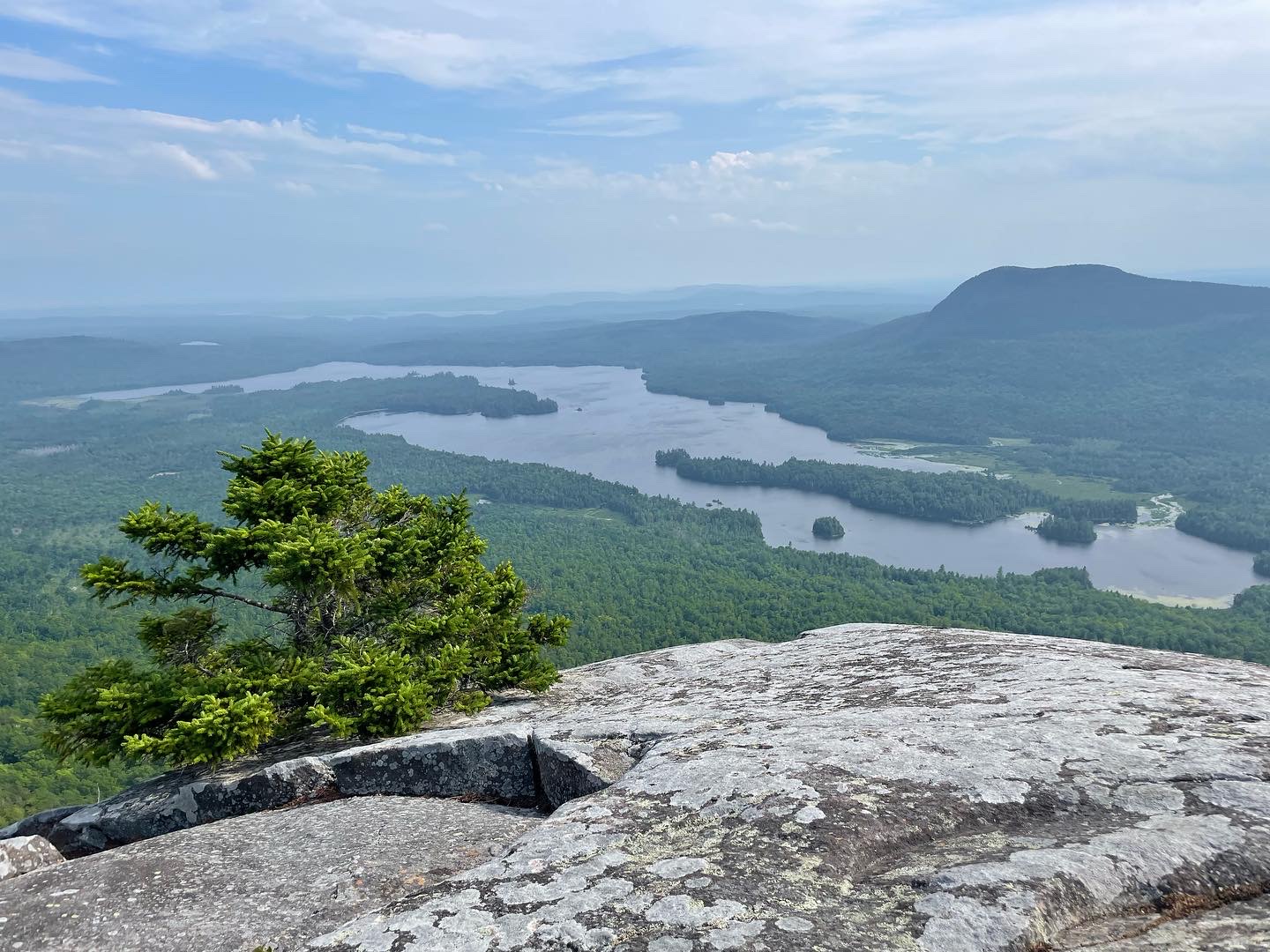 Mile 19: Cloud Pond is hidden half a mile off the trail, down a faint and craggy path. There’s a lean-to here by this lake between two peaks, but I set up my tent near the water. As I clip the fabric to the pole, I hear a snap, and a branch of my tent’s skeleton hangs limply like a broken limb. Afraid of the incoming storm, I rush to prop up the structure with stakes, and it stands up surprisingly well against the wind and the rain. I’ll be nursing this broken tent for the next four days.

Mile 21: The day after the storm is cool and clear. The rocks are slick with rain and make me slip. As I climb up the next peak, an eerie ruin appears along the path — the mangled skeleton of an airplane that crashed here long ago. The cockpit is upside down, and twisted metal and plastic litter the ground. I see the word “Chieftain” written on a chunk of hard red plastic beside the trail. 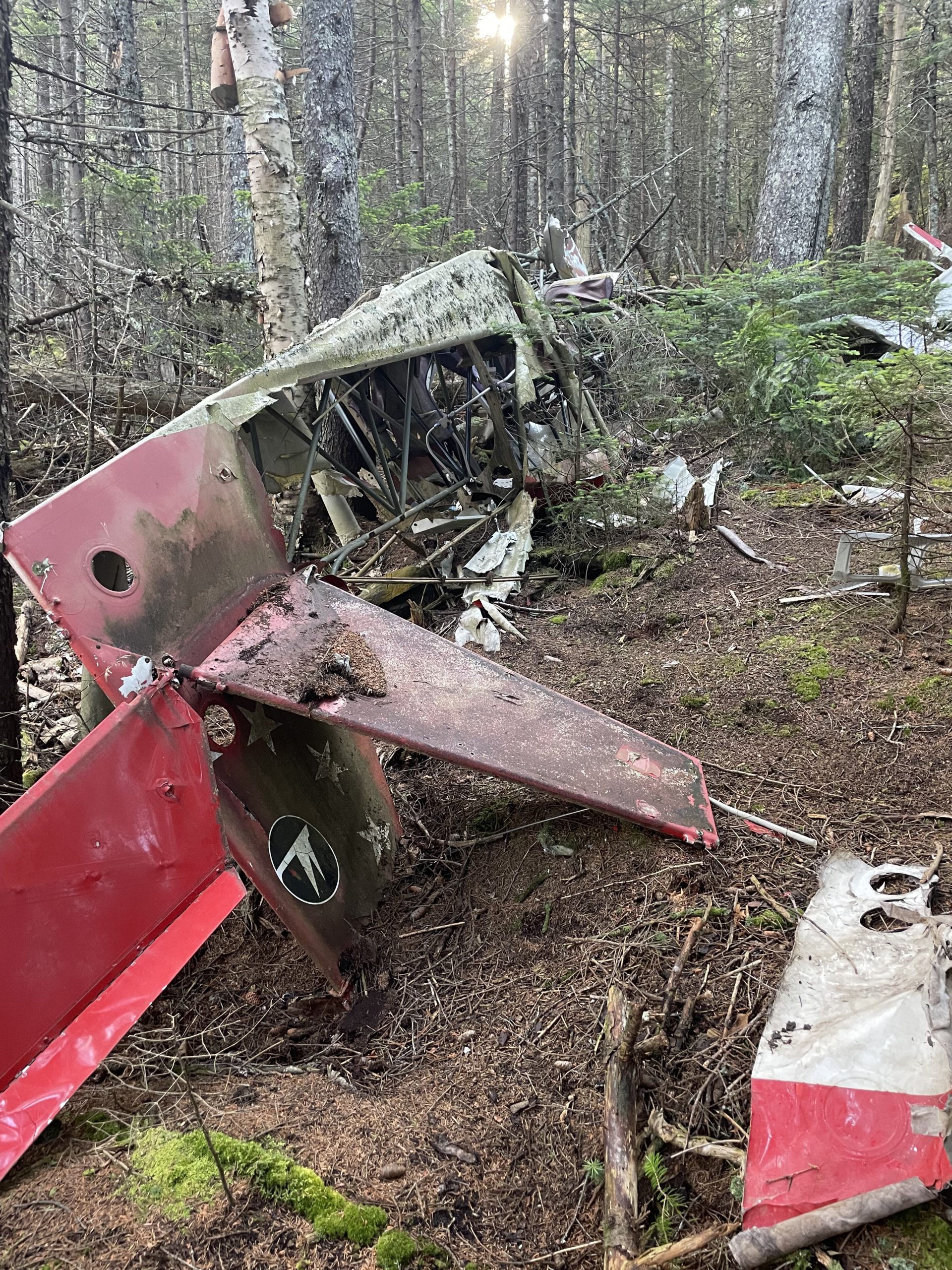 Mile 29: I have climbed all the peaks of Chairback Mountain, a craggy ridge that’s made me slow and tired. I’m ready for a steep and smooth descent, but instead must crest waves of sharp slate all the way down.

Mile 31: At Gulf Hagas, the wide river is a long, shallow ford. I’m surprised to see day hikers trooping down the trail. The further I go, the more of them I see. Isn’t this supposed to be a wilderness?

Mile 32: I consult FarOut and notice that another aggressive hawk was reported nearby. Though I think the nesting season’s over, I put my poles up anyway to shield my face. A day hiker passing by makes fun of me, like I’m afraid of some idiotic boogieman. I’ve never been angrier at someone on the trail. It’s here that I realize the Hundred Miles aren’t a wilderness anymore. They’re a destination.

Mile 38: The campsite is almost empty. There is just Poptart (the Canadian hiker who knocked out the grouse) and one other person. In the morning, before I leave, I sign the log book. One of the teenage boys from the summer camp group wrote a long, excited entry in it the night before. It brought a smile to my face, especially when he said he wanted to hike the Appalachian Trail “just like my aunt did.”

Mile 39: As I climb above three thousand feet, a spruce grouse stands in the trail and stares me down. Remembering Poptart’s story, I brandish my poles as I approach. The bird runs away and eyes me warily from the brush as I walk by. 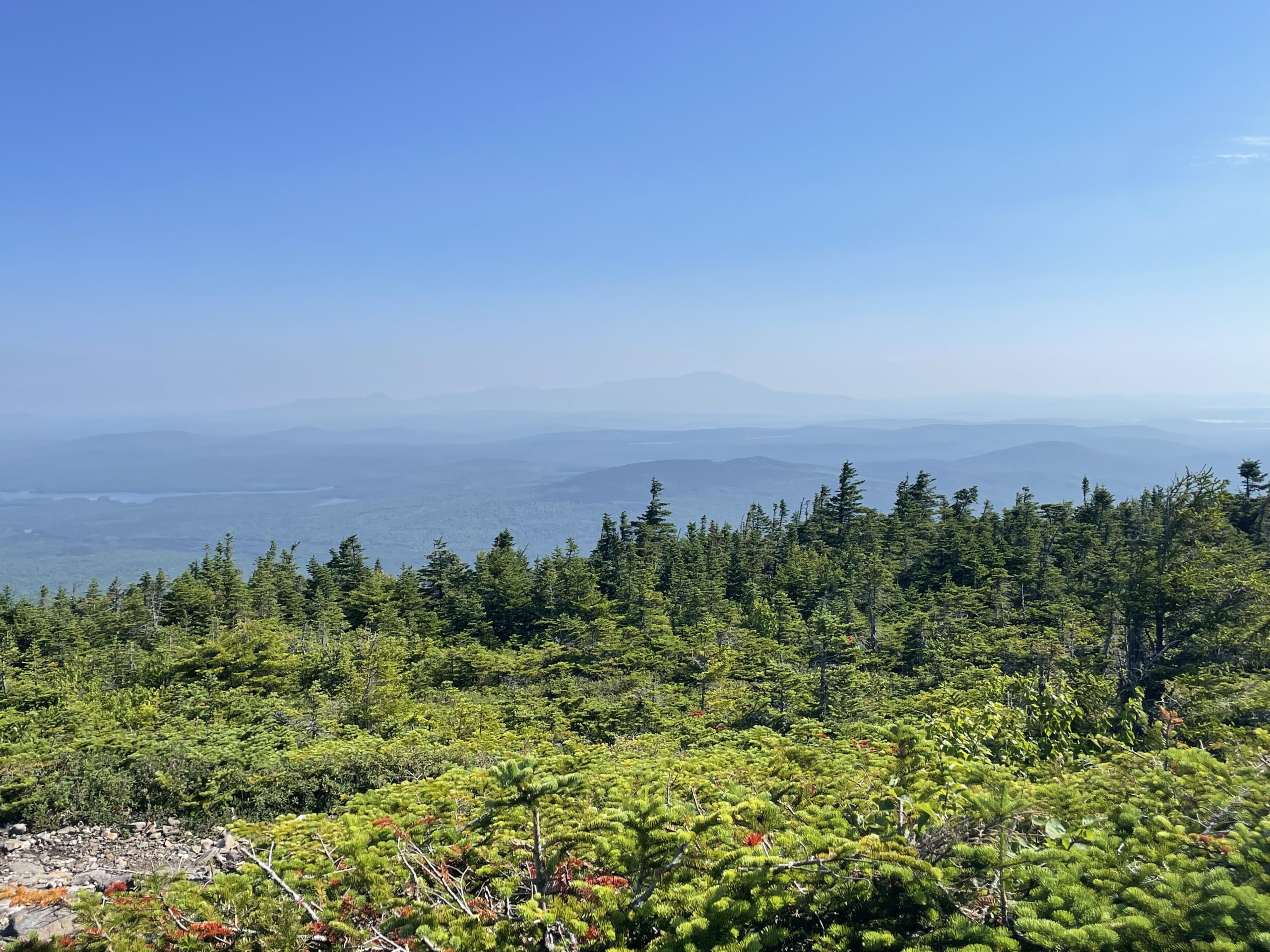 Mile 42: On Whitecap mountain, the path levels out about the trees. For the first time, I see Katahdin clearly in the distance, a blue shadow above the shimmering haze.

Mile 47: Two thousand feet downhill, the spruce grows dark and dense amid boulder-strewn puddles of brown water. Dozens of mosquitoes swarm around me as I stop to pick the sweet, ripe blueberries.

Mile 52: Boardman Mountain looked small on the map, but in the humid heat the climb has left me exhausted. When I see a sign labelled ‘Sand Beach’, I eagerly walk to the lakeshore. There’s a breeze, and the sand is fine an white. I put some ramen on the stove before going out to swim, letting the cool water wash over me. As I sit drying off, eating my lunch, I watch a parade of beetles and wasps and flies making their way to the pink sprays of blossoms on the sweetspire bush behind me. 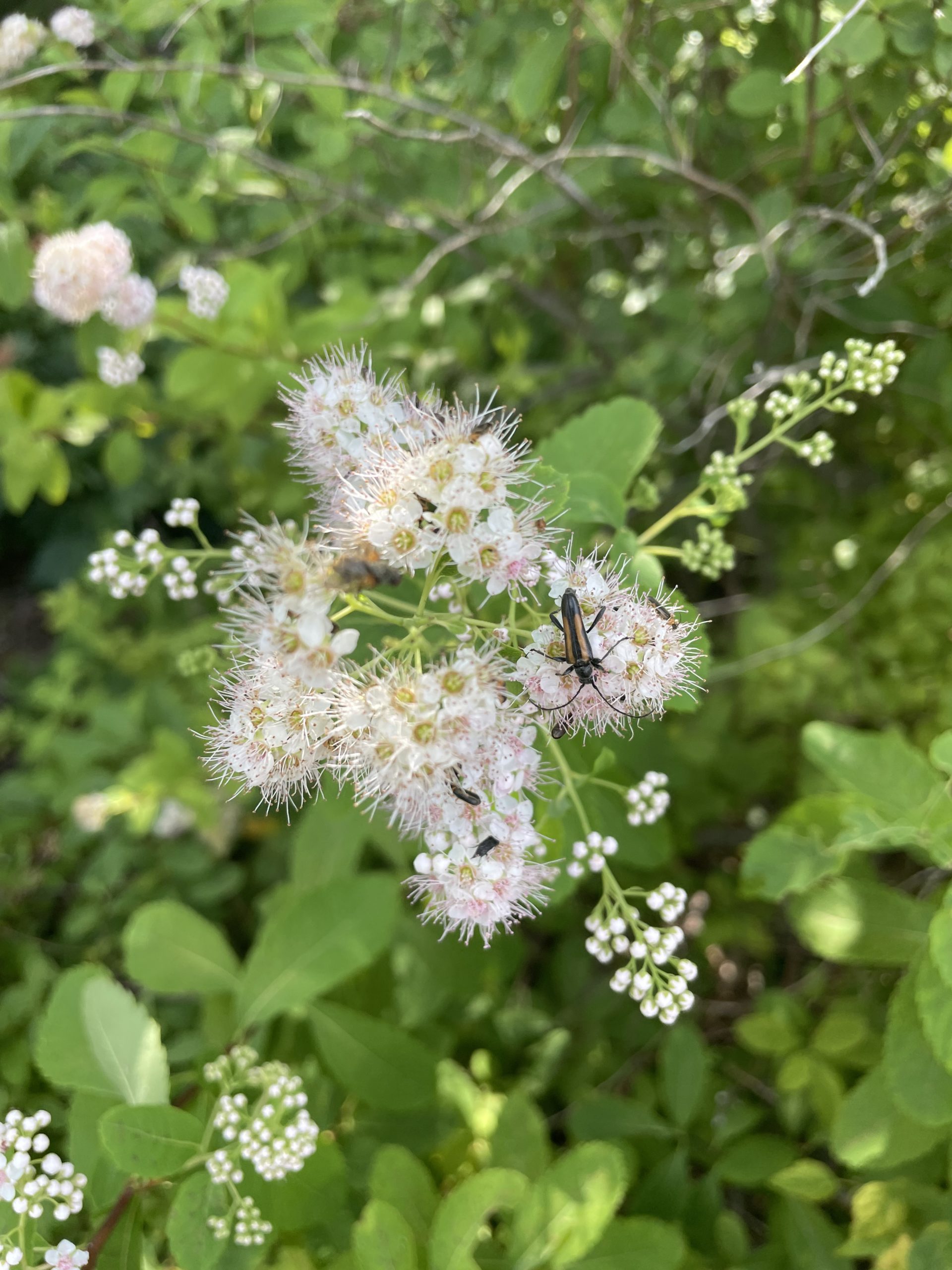 Mile 58: I have followed the path of a long, trickling brook down to a swampy lakeshore. The hemlocks here are huge, untouched by the blight that stunts them further south. The mosquitoes here are merciless, no matter how much bug spray I use.

Mile 63: A spit of land juts out into Jo-Mary lake, a large, broad body of still water glowing in the evening light. This little cape is a campground, and I stay here for the night. I’m the only thru-hiker, but the other backpackers here are a friendly bunch, and I chat with them by their campfire while I eat dinner. 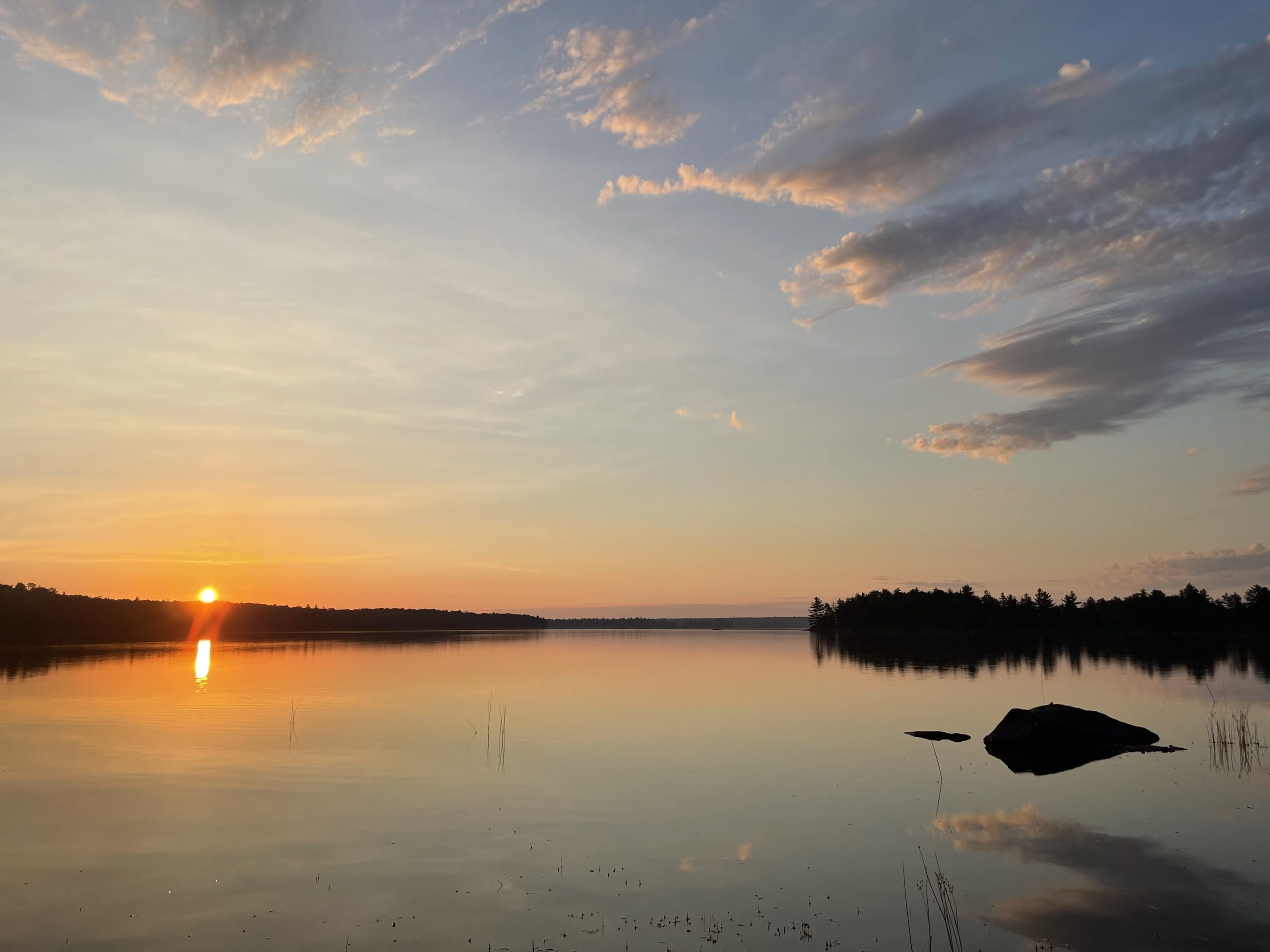 Mile 67: This morning is even hotter, and the air feels like boiling stew. I walk three miles for pure water, and reach Potawaydjo Spring, a huge clear pool with a sandy bottom bubbling up from the earth.  A plank is balanced out towards the center of the spring, and I walk out on it to collect the ice cold water.

Mile 75: I reach Nahmakanta Lake, long and narrow with steep banks. The beach here is gravel, not sand, and strewn with driftwood. I’m suddenly sad that my journey is almost at its end. 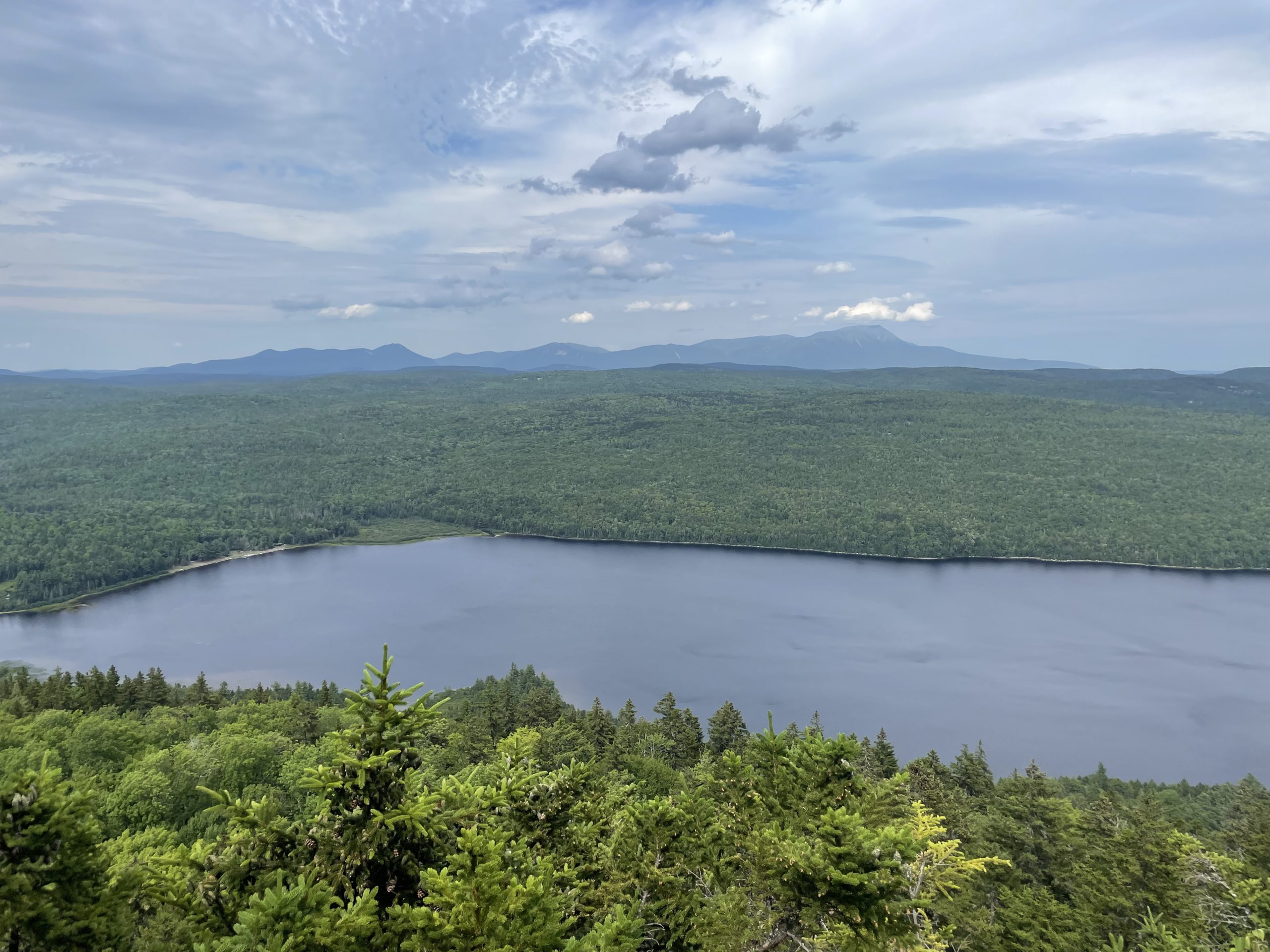 Mile 78: A craggy climb leads up to Nesuntabunt Mountain. Katahdin is close now, its peaks and rock walls looming over the lake. Next to me, a red squirrel sits on a fir branch and nibbles a cone.

Mile 81: I reach Crescent Pond, a kidney-shaped pool of water fringed with rushes, where I set up camp early. The woods here are teeming with blueberries, but the water is too warm and full of life to swim in. I see leeches for the first time in this lake.

Mile 83: The path has wound down and up again, following Rainbow Stream uphill. It flows like a spout, a long cascade between high stone walls for what feels like half a mile. 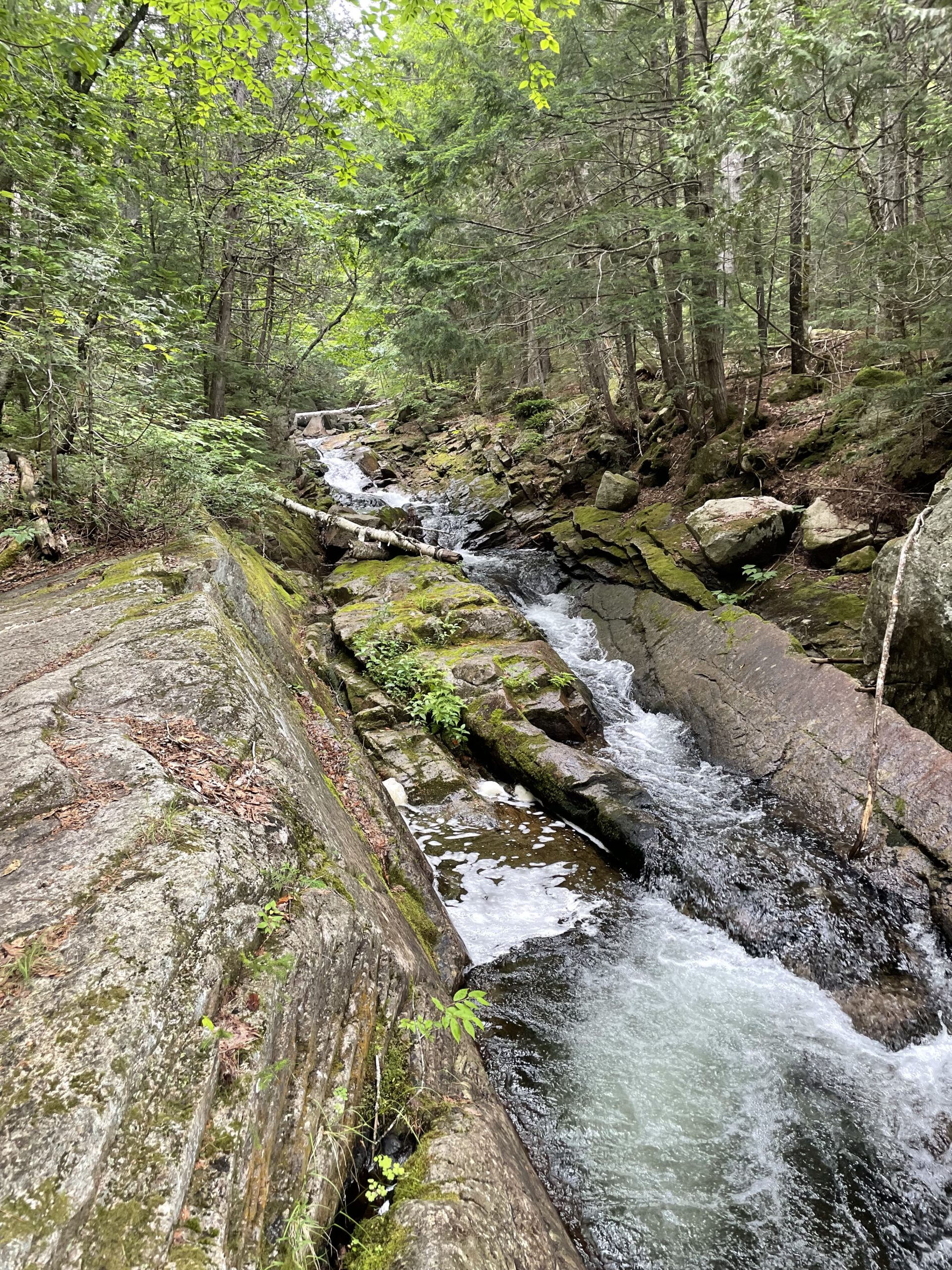 Mile 87: At the side trail to the dam, Katahdin appears, its peak shrouded in mist. As I make my weekly prayer, it slowly clears and I can see the contours of the ridge. I am now less than thirteen miles from Abol Bridge.

Mile 88: Rainbow Spring falls into the lake from a pipe like an open faucet. As I rest at the shore, five young waterbirds swim up and start feeding among the rocks, ducking and diving and fighting for worms and bugs. They are sleek and elegant mergansers, but still with the speckled fluff of baby birds. They do not pay me any mind at all as they swim around me. 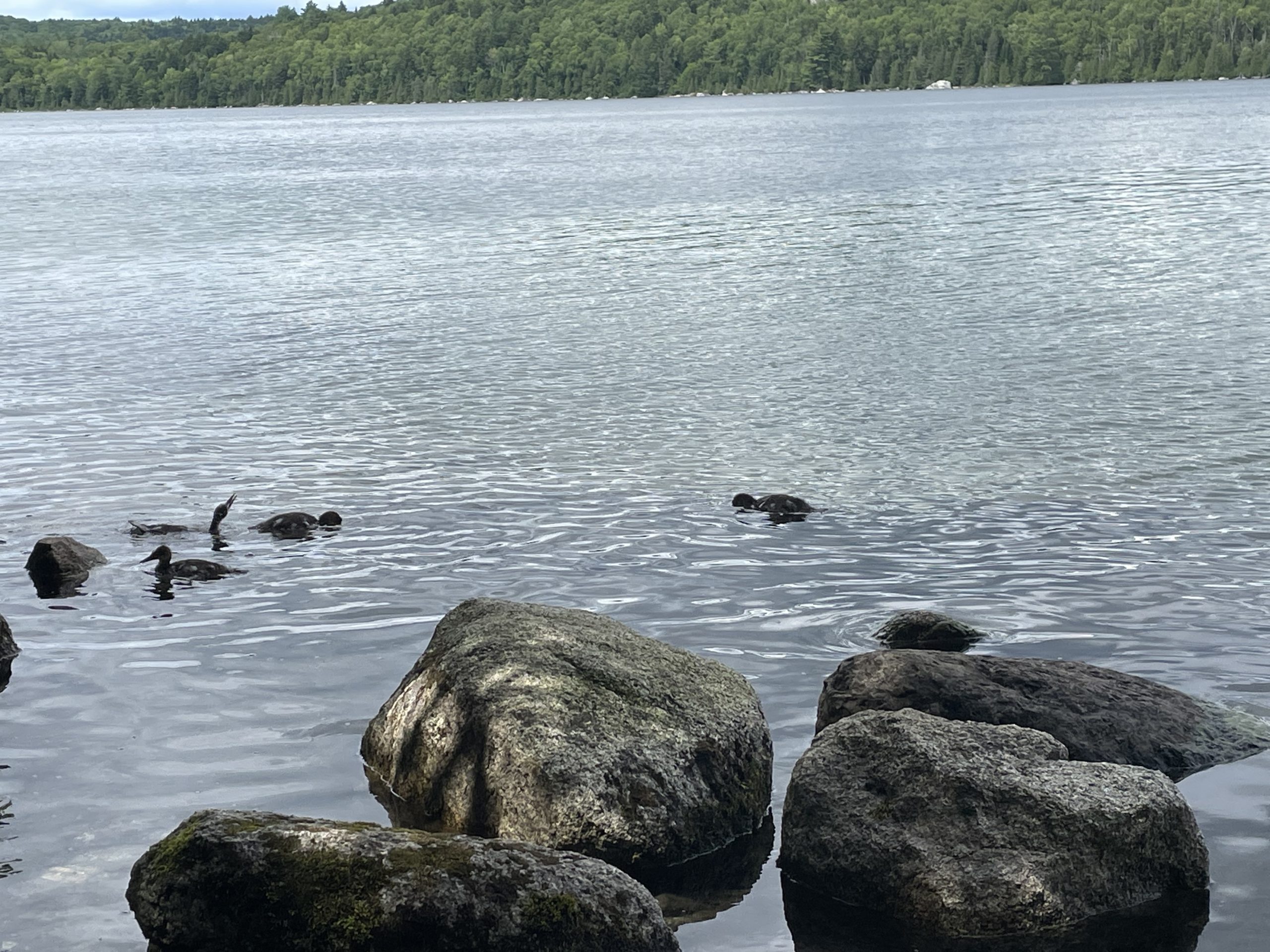 Mile 94: I climb my last hill, the low granite dome of Rainbow Ledges. The mountain, very close now, is hidden by a huge cloud that seems to roll down along its slopes. There’s cell service here, and I call my wife, who’s already out on the road driving up to meet me.

Mile 97: My camp for the night is near Hurd Brook Shelter, another place where rocks jut out of the bog. There’s no need to rush, since I’m only going three miles the next day. In the morning, I’m woken by an enthusiastic group of girls on summer camp, singing a song in chorus as they march on down the trail. Slowly, I pack my tent and make myself coffee, trying to savor my final day in the woods. 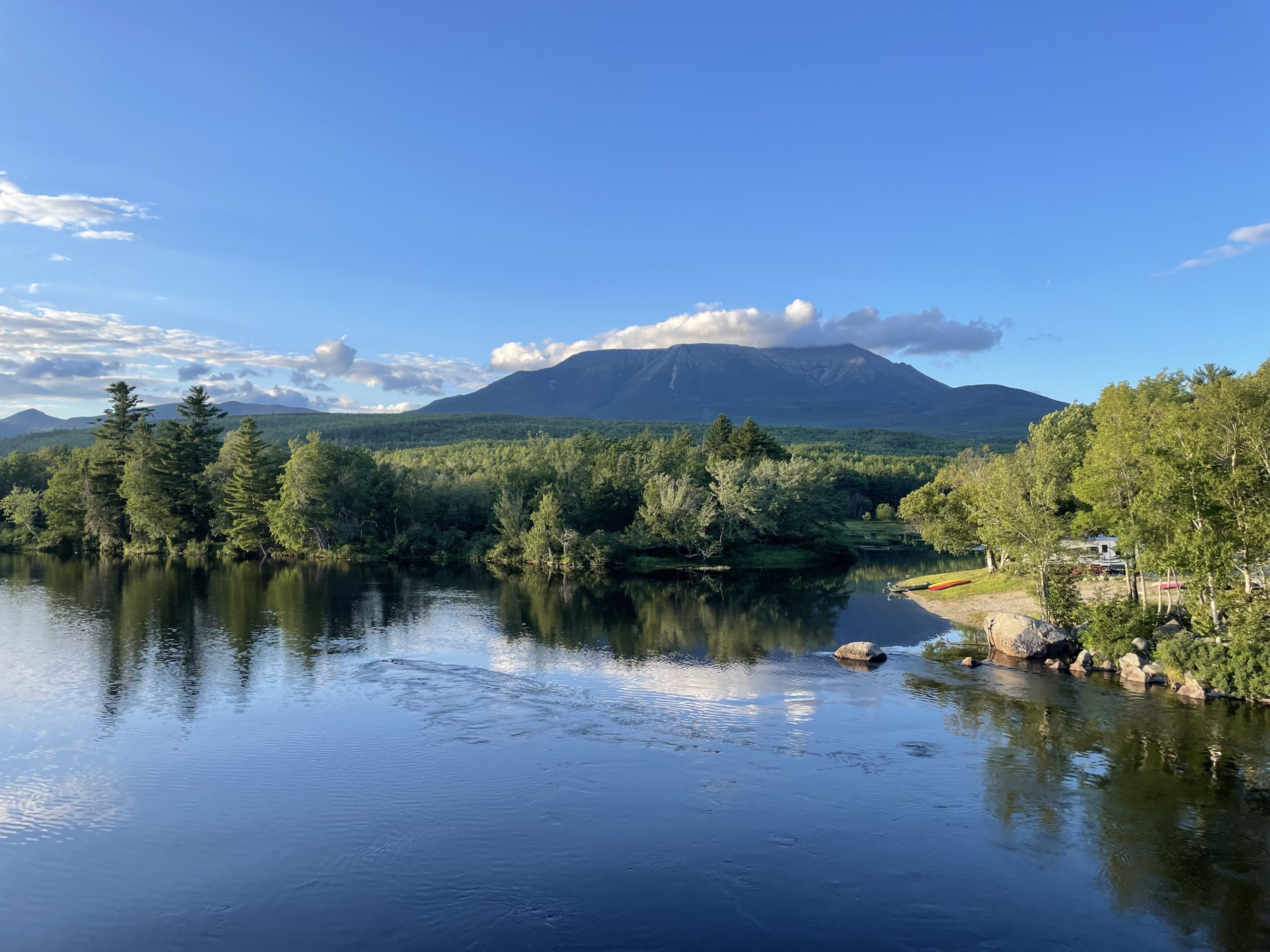 Mile 100: I see a sign that marks the north end of the wilderness. “Do not attempt without ten days of food,” it says. Then a dusty road, and a short ways after, a bridge. I can see Katahdin close and clearly now, a bright green forest cascading down from it to the river below me. Everything is green and blue and crisp, and swallows wheel over the water. I’ve arrived at Abol Bridge.