One Last Milestone Before The Finish

For northbound thru-hikers (NoBos) starting in Georgia, the 2000-mile milestone marker materializes within a relatively flat forested section of the Appalachian Trail, just before reaching the town of Stratton, Maine. Approximately one hundred miles north of the New Hampshire state line, it appears after clambering through Goose Eye, Mahoosuc and Bald Plate, a pre-Cambrian bedrock obstacle course following the erratic polygraph line charted in AWOL’s guidebook. Or, as I vaguely recall, picking my way through The Horn’s eroded rock garden hell of a vertical drop and looking up at Saddleback Junior, an affable, but adrenaline producing named spike with yet another WTF moment. I’m sure I said to no one, out loud, a more restrained; “seriously?!”

Southern Maine had been challenging, but not without rewards. Summiting Bemis Mountain and pausing to pick blueberries in places amidst lichens and reindeer moss, where the bedrock has been worn smooth to bare granite, I first glimpsed The Richardsons and Mooselookmeguntic Lake more than three-thousand feet below. I had paddled these expansive lakes five years earlier as part of my 740-mile Northern Forest Canoe Trail thru-paddle.

And now here I was. Back. On foot. A completely different perspective.

In 2016—at a time when I imagined I was more than halfway through a thru-hike and not a long section hike (LASH) as it later would become—I found myself with Spirit. And while I assume that I do have spirit (yes I do, I have spirit, how ’bout you?!), I instead am referring to the name of the NoBo with whom I had been hiking since the Whites in Gorham, New Hampshire. I was with Spirit (again we are talking about the hiker, not the soul), when she passed this milestone—trail-wide numerals spelled out within a twig frame, embellished with hundreds of tiny pine cones. Or at least that is what it looked liked last year. Someone had spent way more time than I did creating this mile marker. You couldn’t miss it.

The two of us paused within the spruce woods. Chickadees fluttered between branches. A few mosquitoes buzzed lazily around our ears. Only the staccato hammering of foraging woodpeckers broke the sanctuary silence. I took photos, a wave of transformational emotions washed over Spirit’s face as we lingered beside a mossy boulder: happiness, incredulity, pride.

I hadn’t planned it to be this way, but my 2000-mile milestone arrived darn close to iconic McAfee Knob. McAfee Knob and the Katahdin terminus sign are unquestionably two of the most photographed spots on the Appalachian Trail. Katahdin represents a completion, a pinnacle at the end of a long journey. It’s the icing on the cake. With a cherry on top. It’s a side of thick-cut bacon to the easy-over eggs. It’s artisanal cheese in macaroni. Peanut butter, or better yet, Nutella, to the jelly. Oh my. All these food metaphors—must be the hiker hunger talking…

Anyway, like Maine, McAfee Knob shares similar geology—a primordial mountain range rivaling the modern Himalayas that has been slowly eroding for more than 300 hundred million years to form what we now know as the Appalachian Mountains. Here, however, in central Virginia, instead of ancient granite, resistant sedimentary rocks known as the Tuscarora Formation created ridges. These rocks were crumpled up into folds during a mountain-building event some 100 million years after they were deposited.

Unlike last year—and with the exception of a few switchbacked gaps—the one hundred miles leading up to my personal 2000 milestone was, comparatively speaking, a guilt-free flatline. And although there are occasional rocky, ankle-rolling, PTSD-inducing trail sections reminiscent of northern Pennsylvania, only the descent from Dragons Tooth, a little more than ten miles south of McAfee Knob, was even close to the terrain found in southern Maine. Hiking it lasted all of one hour instead of a week. It likely took even less time for those of a certain age or resiliency, those hikers who enjoy a full range of motion, with whom knees and head don’t outwardly balk at being propelled by gravity, down stratigraphic slabs of precipitously balanced Silurian sandstone.

This year, although I’ve continuously leap-frogged several hikers since day 12, I’ve found myself generally hiking unattached to any group or individual. Although, to be fair, I didn’t connect with Spirit until Hanover, New Hampshire and then we didn’t really start hiking together until the last three hundred miles—which for me arrived at the 1000-mile mark. And this year, I’m only hiking the remaining 862 miles in total.

On this day, cirrus clouds billowed high within the early morning azure sky, ambient tendrils stretching toward the horizon. I had intended to reach this milestone the day before and had just descended to VA Route 311 near Catawba when an afternoon thunderstorm hit. As I was studying the kiosk at the parking lot indicating that camping was not allowed near Tinker Cliffs, my intended destination, the sky opened up. I checked my phone for service. And a weather report. Storms were expected to last through the night. The wind was now blowing the rain under the narrow protection of the kiosk awning.

An internal voice reminded me that I could get a shuttle and slack the twenty-mile section back to Daleville, Virginia, the next day under clearer skies. Before I could talk myself out of it, I made the call and was shuttled to the Howard-Johnson’s where my next food drop was awaiting, and to a hotel that for some reason, at least in my room, didn’t use fitted sheets. Or hole-free bed spreads. What it did have, however, was the cleanest bathtub I’ve seen to date. I soaked in that tub for an unprecedented amount of time, soothing muscles, removing the salt patina, dissolving embedded dirt. An aquatic thermal therapy akin to any resort spa experience. Then again, the bar is currently set pretty low these days.

For NoBos beginning in Georgia, McAfee Knob arrives just after 700 miles, but at four miles from a road, it is easily accessible by day hikers. The shuttle driver I later used for slack packing, reported that 500 to 600 people visited the spot over the recent Fathers Day Weekend, with a hundred cars cramming into the small parking lot. It is beautiful. It is a highlight. And for Virginia, McAfee Knob is the Appalachian Trail’s Farrah Fawcett poster image. Or perhaps, speaking to a newer aesthetic, it’s Beyoncé’s eight-month pregnant fertility goddess Instagram slay.

Several people arrived while I was busy working on my own impermanent 2000-mile artwork, an organic image not nearly as profound as the one fashioned in Maine. Nor as provocative as Farrah or Beyoncé. But probably quite baffling to anyone who stumbled upon it off the beaten path.

As I was finishing up, another thru-hiker whom I hadn’t seen since Roan Mountain, Tennessee after camping together near Grassy Ridge Bald, 300 miles earlier, appeared. We talked of recent campsites, of our personal highlights. Of challenges. Of bear counts. Then I nabbed a day hiker into taking my own iconic McAfee cliff shot. My personal 2000-mile commemoration. It might be difficult to see from the distance, but if you look very closely you may very well be able to see signs of my own transformational emotions—of my own bittersweet happiness, incredulity and pride.

There is still more than a hundred miles to go, but I’m headed toward Rockfish Gap, what is now my own personal terminus. My own Katahdin. My own icing on the cake. The fries to my burger. The coffee to my donut. The milk to my cookies. You get the picture… 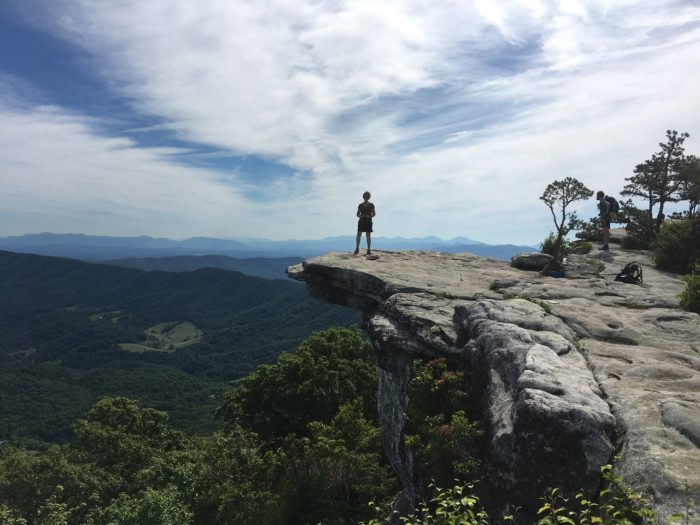 My 2000 milestone atop McAfee Knob. A poster child, not soon to be mistaken for Farrah or Beyoncé. 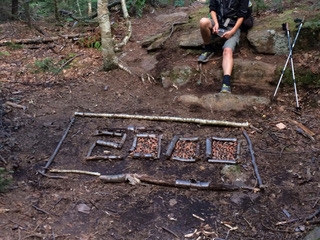