Out of Chet’s Garage and into Vermont

The White Mountains are now behind us, and they were awesome. I must say my morale has shot way, way up since we have been in New Hampshire. The views were spectacular because a lot of it was above tree line, and being above tree line reminds me of home. Also, the terrain was significantly easier than the Maine terrain, in my humble opinion. The Maine terrain completely killed my first pair of shoes in a hurry. 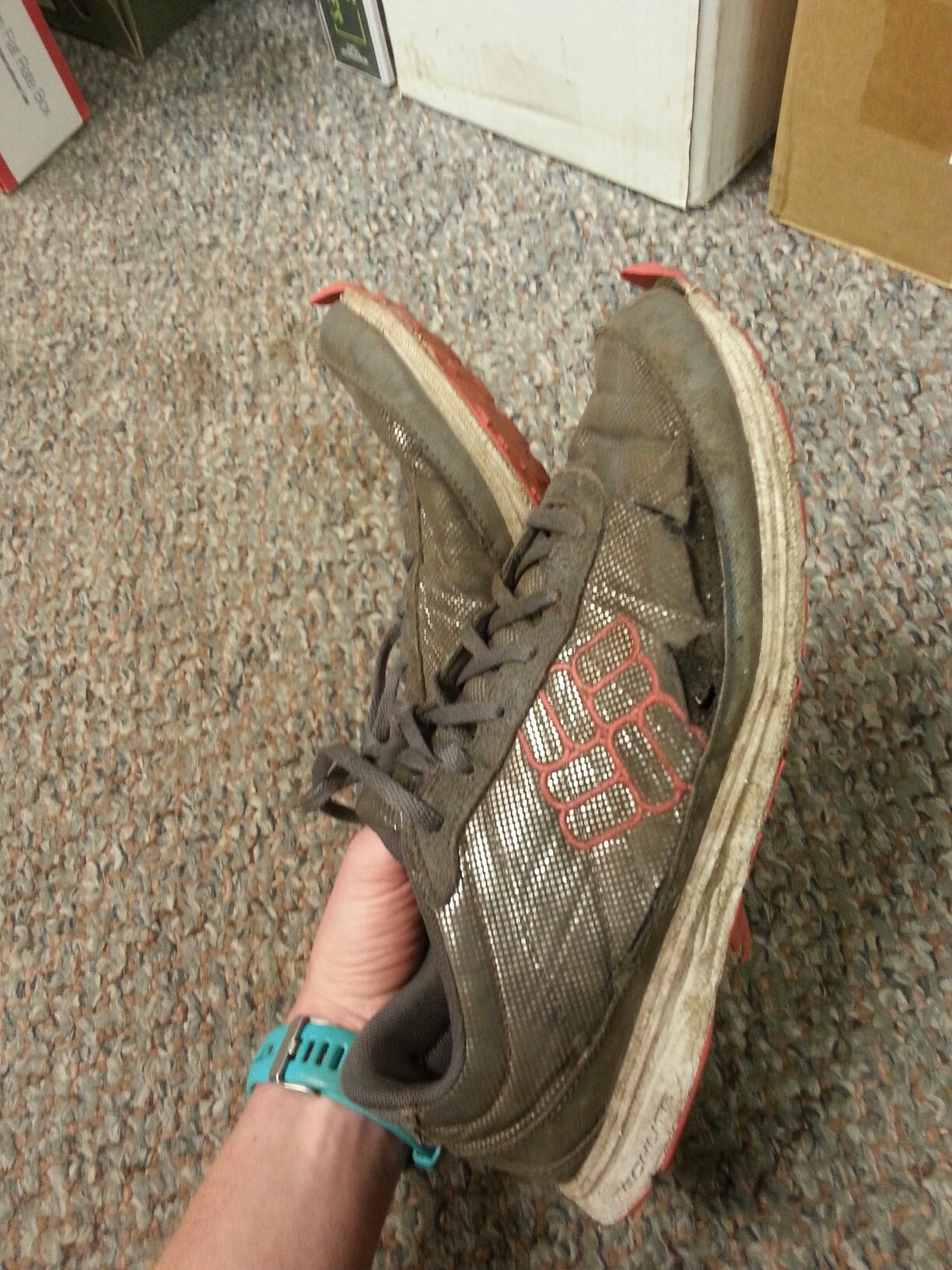 In the Whites, we did work for stay at Madison Hut, Mizpah Hut, and Zealand Falls Hut. Madison Hut is close to Mount Washington, was renovated in 2011, and is really nice and really large. The night we stayed there, we showed up at about 4:30 and asked if we could do work for stay. The staff said yes, we could hang out outside or at a designated thru hiker table, and dinner would be served to the guests at six and to us at 7:45. So we sat at the thru hiker table, which was adjacent to the guest tables, and literally sat there and watched the paying guests eat their food, which was a turkey dinner with all the fixings. Meanwhile, a drunk guy shouted at us all through dinner, causing his kids much embarrassment. At 7:45, we were invited into the kitchen, where we spooned some leftover side dishes onto our plates and were told to basically go somewhere to eat where we would be out of the way. After we ate, I cleaned all the white surfaces in the kitchen with bleach, and then we had to wait until 9:30 to set up our sleeping bags on the dining room floor because the guests linger in the dining room until then.

At Mizpah Hut, we hosted a Q&A section to earn our keep, and there was an older NOBO who joined us. At night, while we were sleeping peacefully on the dining room floor, the older NOBO suddenly started screaming in his sleep. It was a decently coherent speech that went something like, “F#&! you! We’re all customers here! What kind of customer service is this?! This is ridiculous and asenine, and I won’t pay the tax!” It was terrifying but hilarious.

At Zealand Falls hut, there were the biggest spiders I have ever seen. They were two-and-a-half inches in diameter, and everyone was amazed that I had not seen them before, and yet all the guests were flocking to the porch to take pictures of the spiders. Then there was a double rainbow, and all the guests flocked outside to take a picture of that, too. They were easily entertained. Even though there were some annoying things about the work for stays, they were worth it because the staff at the huts fed us delicious leftovers. I didn’t cook dinner at all in the Whites. 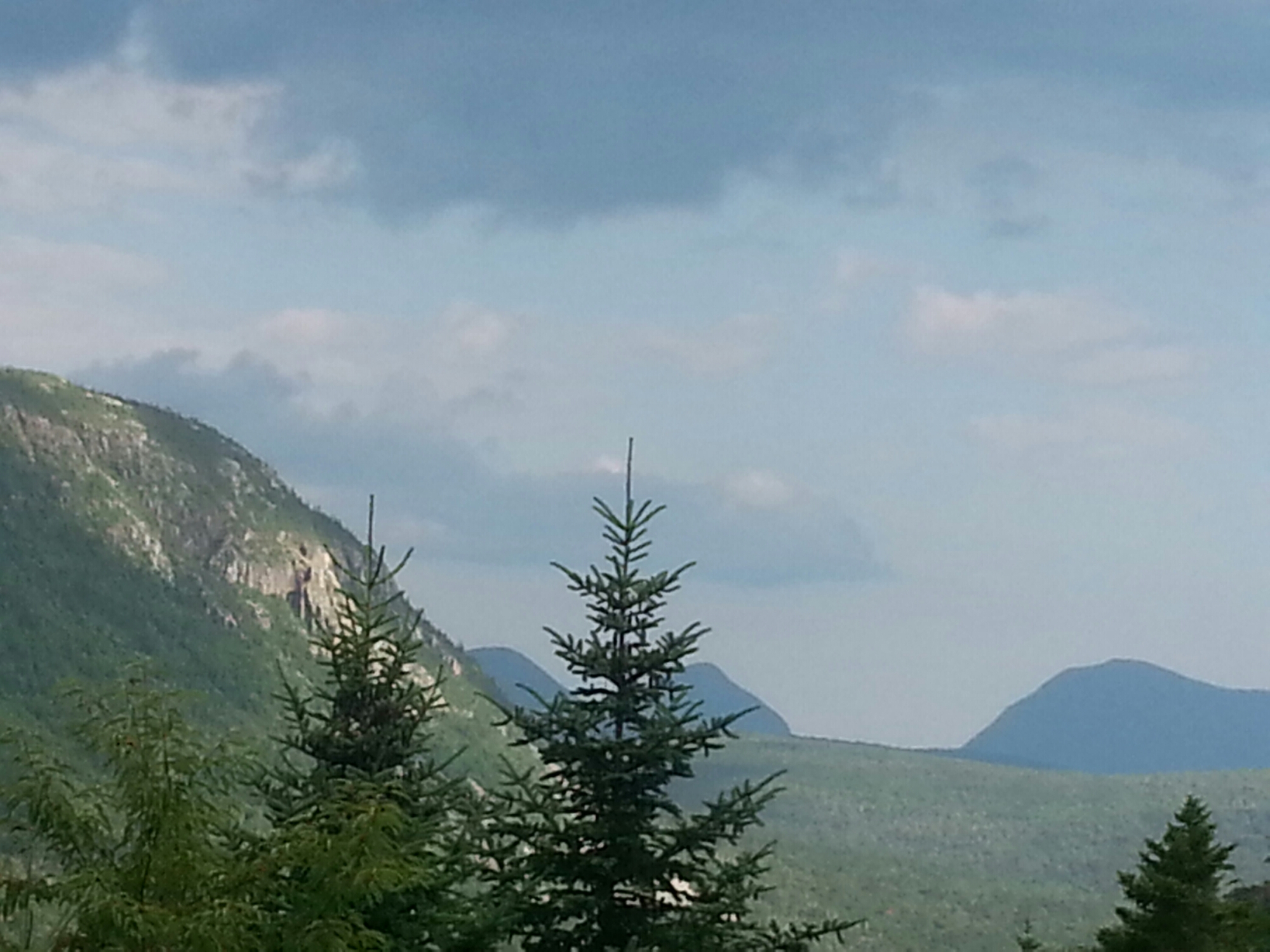 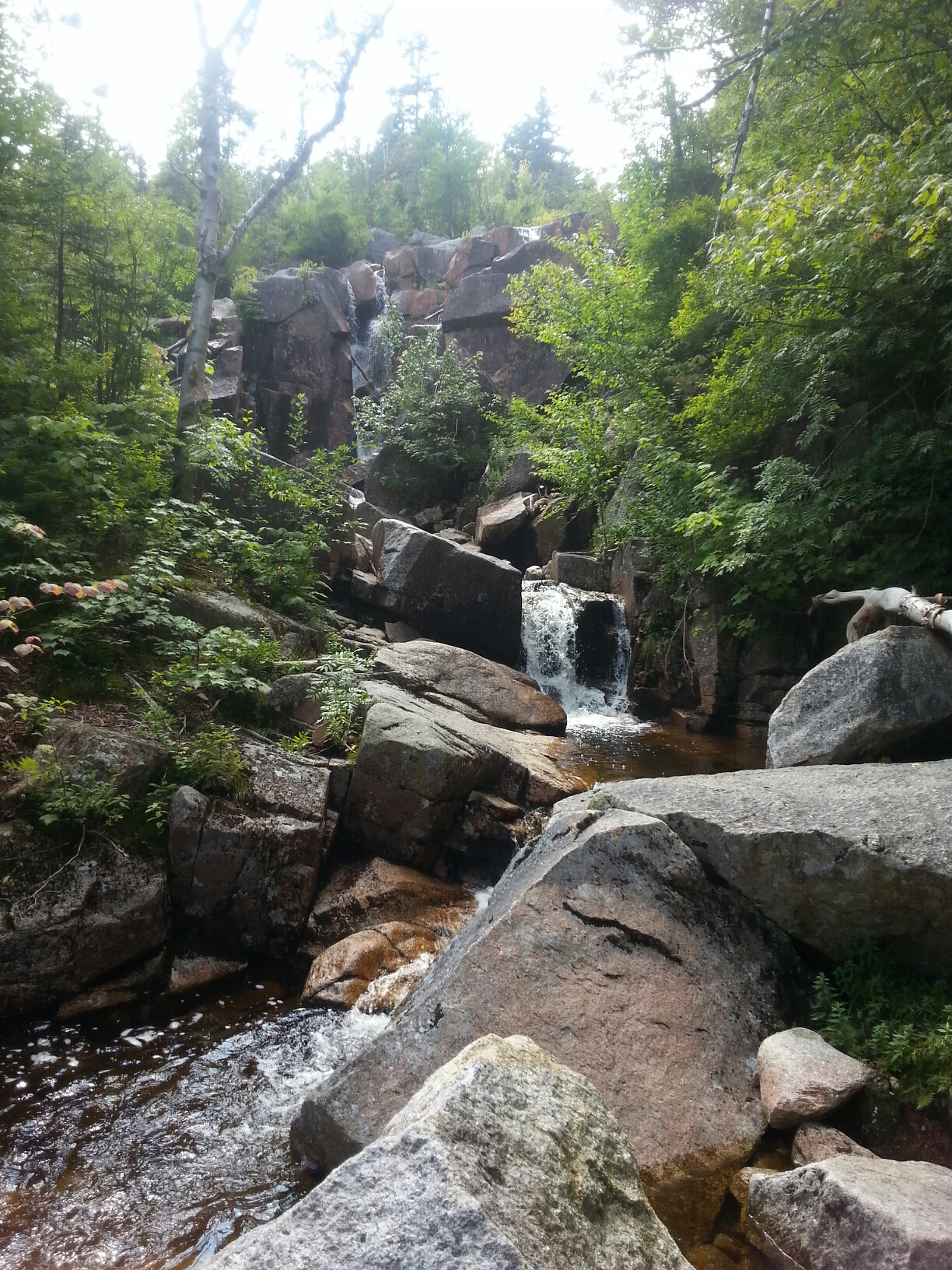 After we stayed at Zealand Falls, we went into Lincoln and stayed at Chet’s garage. Some NOBOs had told us about Chet, who is a guy who opens his garage to hikers after they pass a Monty-Python-style oral quiz about which mountains they hiked. Chet’s seemed to be a black hole–people would stay there and never leave. They would practically live at Chet’s. It has become a running joke, such that whenever something is difficult, we say, “That’s it! Forget this, I’m going back to Chet’s garage.” Or if someone is complaining, we will say, “You have two options. You can either hike the 18 miles, or you can give up and go back to Chet’s garage.”

After Chet’s garage, we hiked Kinsman, which everyone said would kill us. All month people have been telling us we were going to die on various mountains. Instead of dying, Pickles decided to trim Spot’s mustache on top of Kinsman, so that was a good time. 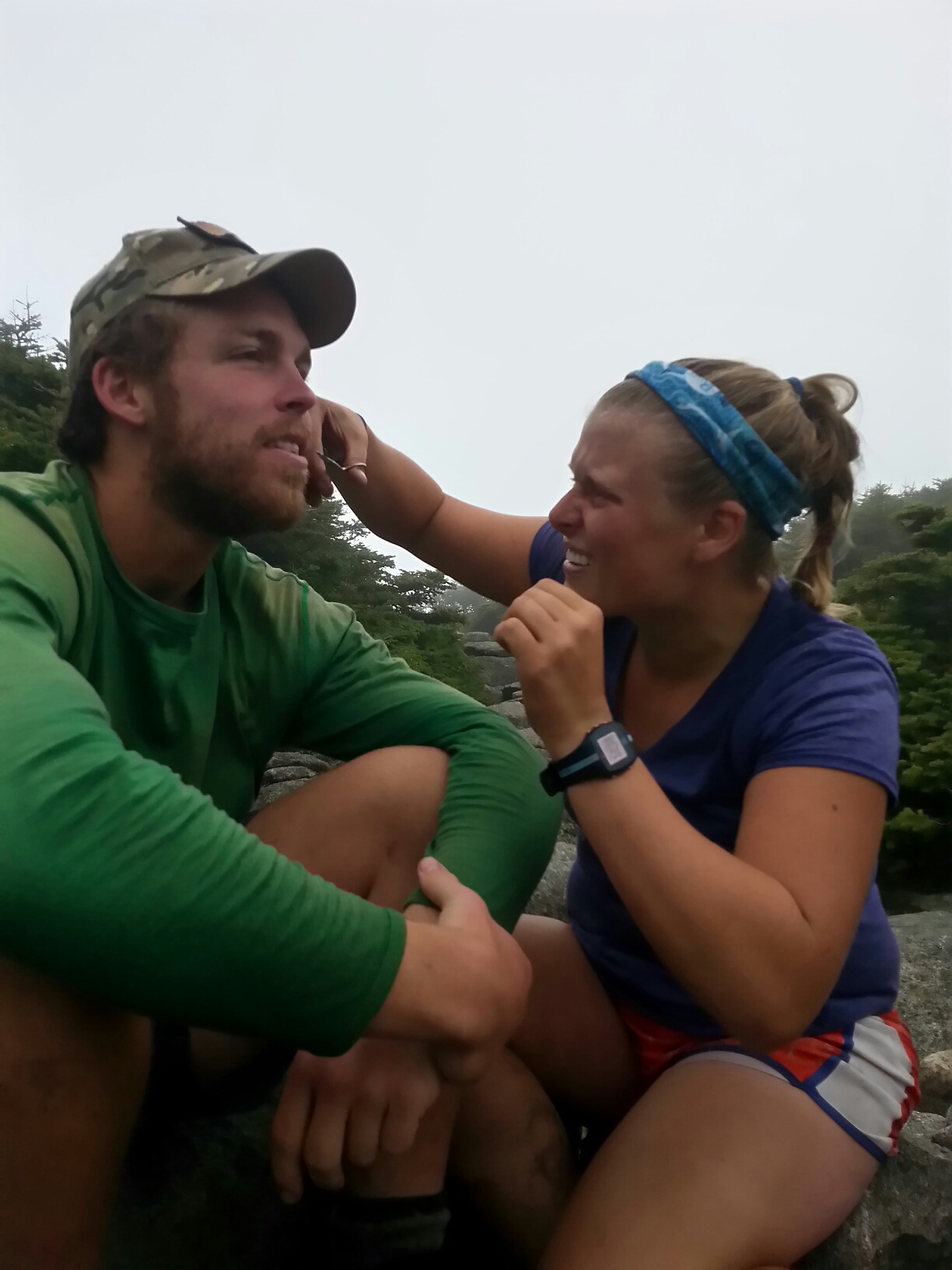 At the end of the Whites, Pickles’s friend Russ picked us up at a road crossing and took us to stay with his wife and daughter for a couple of nights so they could slackpack us over Moosilauke. They let us stay in a vacant apartment they own, they cooked us two dinners and two breakfasts, and they hiked up to the Trapper John shelter with us to take brownies and smores to thru hikers there. The disappointing thing is that a couple of NOBOs at the shelter spent about half an hour badmouthing us for being SOBOs after our friend gave them trail magic. Real cool. I will never understand the animosity between NOBOs and SOBOs. I must say, though, that most of the NOBOs we have met have been really nice. We are about to meet a whole lot more as we cross the Vermont border and  approach the NOBO bubble. Right now we are about half a mile from Vermont, and it feels good! One month down. Also, we are currently digging into a red velvet cake in our motel room, living like kings. 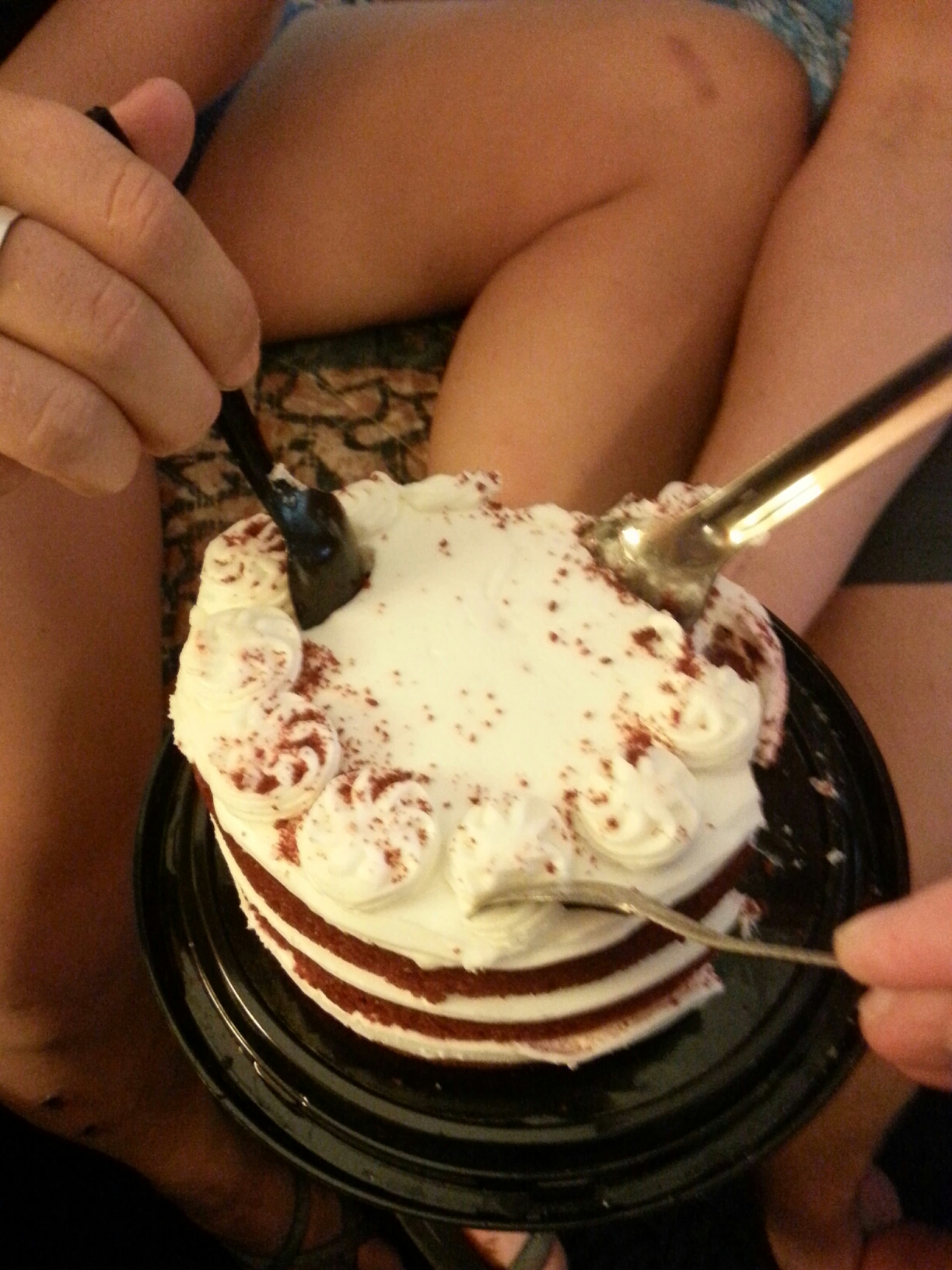