Pancakes and Lightning in Shenandoah

I’m still working on catching up to the present, but this blog will cover my time in Shenandoah National Park and beyond, until Harpers Ferry.

Shenandoah is one of two national parks the trail goes through.

The other being Great Smoky Mountains National Park. The national parks are honestly kind of a pain. Most places on the AT you just keep hiking along the trail and camp wherever. In the national parks, there are a ton of rules about where you can camp, what kind of permit you need, etc. You also get way more bears, and a lot more people in general. Thankfully, Shenandoah also has waysides so you can buy snacks and real food on a daily basis.

The first day in Shenandoah was exhausting.

I don’t know why. I got started a little late because I was coming from Charlottesville. It was also really hot again, and we had a ten-mile stretch without any water sources. But the terrain was pretty relaxed, especially compared to North Carolina and Tennessee. Still, we dragged through the 20 or so miles, finally arriving at camp around 7. At one point, Robin borrowed some water from some day hikers in a parking lot since we were running low; luckily they had a bunch they didn’t need. Unfortunately, since it was a Saturday and national parks are popular, the shelter was packed by the time we got there.

Bears lurking in the background.

The national parks are hot spots for bears. Part of this is because the bears are protected, but it has a lot to do with the greater numbers of people, and how lax many of them are with storing their food and leaving trash around. The shelter we stayed at the first night had a bear lurking around, and I saw my first bears on the trail a few miles later the next morning. It took me a few seconds to realize what I was even seeing, and by the time I realized they were bear cubs, they were already running away down a hill.

The AT is better with snack bars.

I spent a lot of my time in Shenandoah hiking super fast to get to waysides before they closed. It’s worth it to have a footlong hot dog and blackberry milkshake for dinner instead of more ramen. I also had some excellent blackberry pancakes for breakfast at the Skyland restaurant. They had lavender whipped cream. Kind of expensive, but it’s kind of hard to resist. The trade-off to having all this access to restaurants is that there are people everywhere, and you’re frequently in sight of a road. 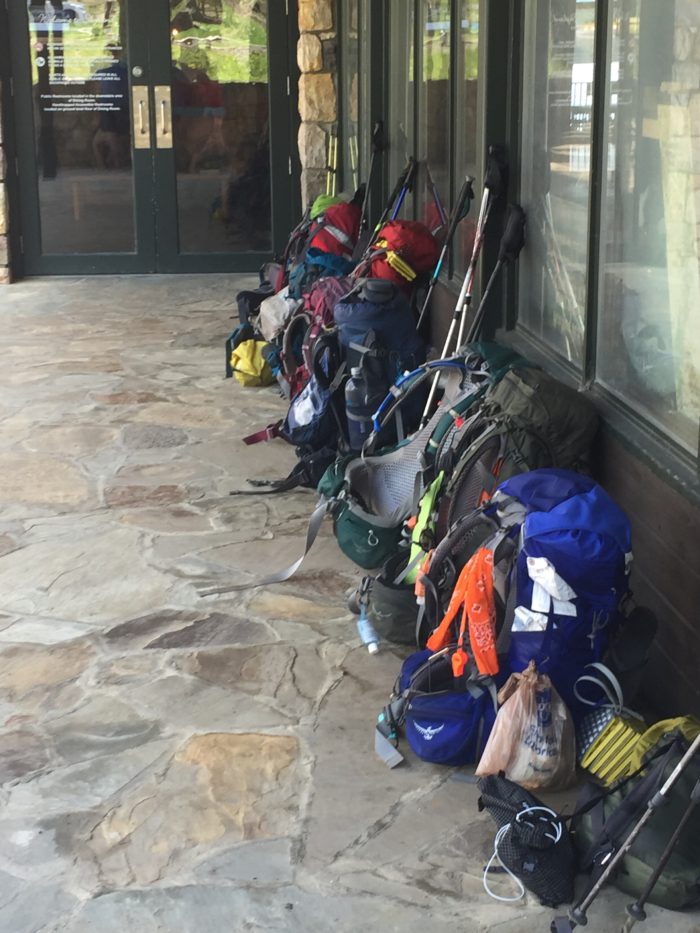 So on my third day in Shenandoah, I was aiming to get to the wayside before it closed for dinner. I made it in time, had some awesome food, and was hanging out with some other thru-hikers before starting the last four miles to the shelter. It had been raining on and off, so I figured I might as well start hiking while it was not currently raining. I had been hiking for about 15 minutes when everything got really dark. It was like someone was turning down the dimmer switch on the air. And then it started pouring rain. This was definitely the scariest storm I’ve been caught out in, and I doubt I’ll see another that intense. I was soaked in a few minutes, even wearing my rain jacket. It was difficult to keep hiking because the rain kept splashing up into my face and making me gasp for air, and the trail was totally flooded. There was a bunch of thunder and lightning, but I was more worried about the possibility of trees being blown down than being struck by lightning. I wasn’t really sure what to do, so I just did what I always do – I kept walking. Eventually the storm blew through and the rain stopped, and a few hours later I was dry in my tent. 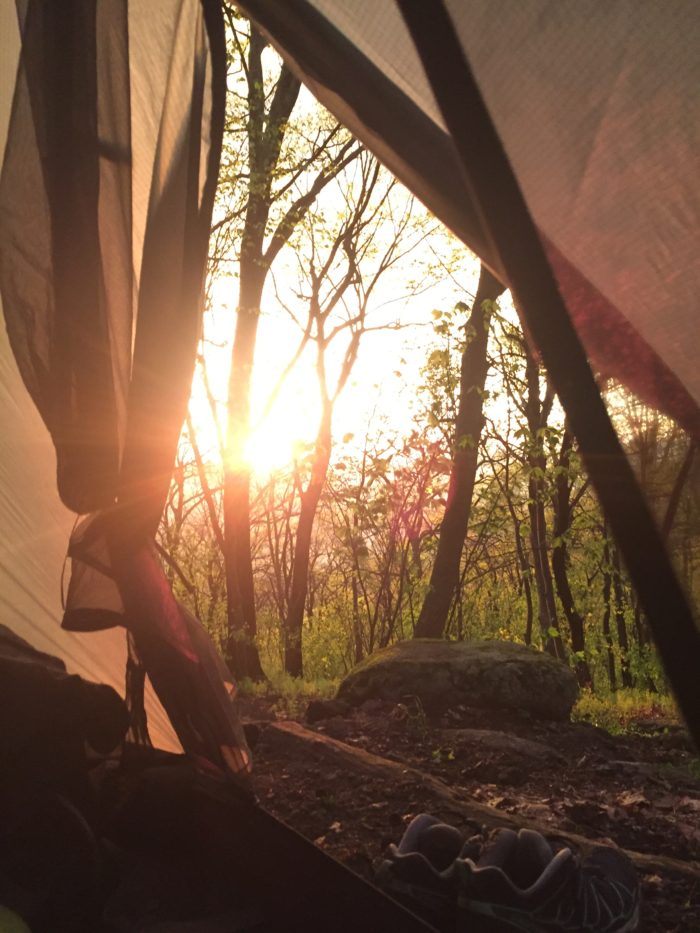 The sun always comes out eventually.

My brother joined me for the last section of Shenandoah.

It was his first backpacking trip, and we were planning on having two decent-length hiking days with a short day into Front Royal on the last day. While the weather had been mostly sunny and hot with the occasional thunderstorms, it basically turned into nonstop rain as soon as he arrived. We did 14 miles on the first day, which was kind of a lot for someone who hadn’t been hiking every day. He made it through that, and we had a damp, dripping night in my tent. The rain continued the next day, and it was just nonstop. Like some days will be rainy, but it’ll mostly be cloudy and drizzly so you kind of have a chance to dry off. This rain literally never stopped for like three days straight. There was constantly water falling from the sky. By the time we made it to the shelter, we were completely soaked. It was three more miles to Front Royal – we decided to just push on and make it to a hotel for the night. 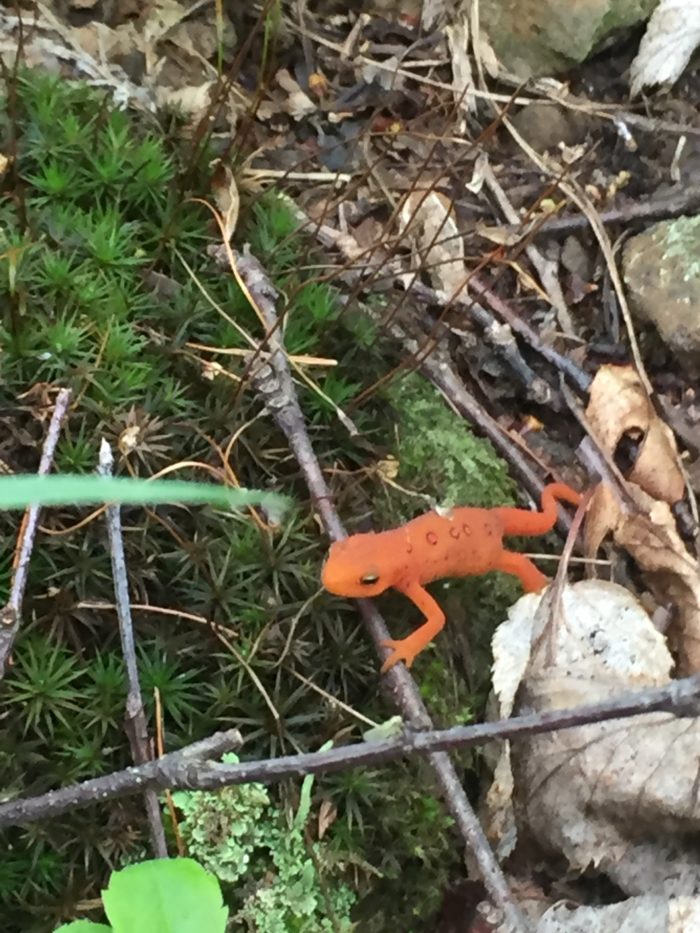 When it rains, these little lizards come out and they are so damn cute.

The next day, we hung out in Front Royal. I made a gigantic mess hanging up my tent in the shower. I actually ended up just trying to rinse it off with the shower, since I figured it couldn’t really get much wetter. I finally got it dry(ish) with the blow dryer. In the afternoon, I got a call from Buck and Robin, who had fallen behind a few days earlier because Robin’s feet had been giving her problems. They hadn’t planned on stopping in Front Royal, but were also really sick of the rain, so we picked them up. Chase and I had fun exploring Front Royal, which I think is one of the better trail towns. We spent some time at the Virginia Beer Museum, checked out the outfitter, and got some Thai food. It rained the entire time we were in town, too. I’m hoping he wasn’t completely traumatized by this less-than-ideal backpacking trip. 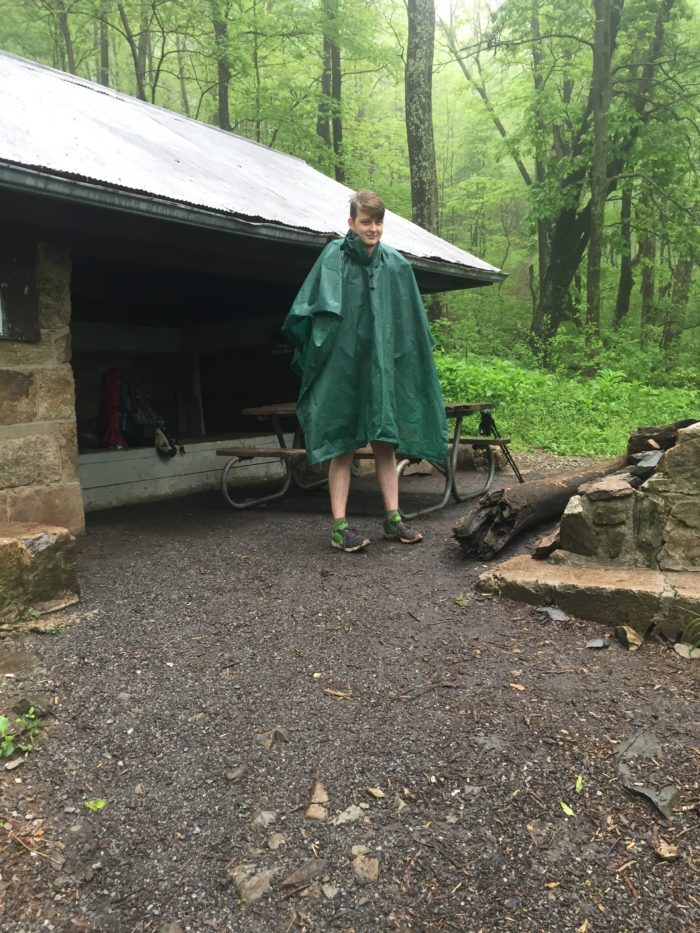 Chase is a trooper.

Once we left Front Royal, it was a quick few days to finally get out of Virginia.

It stopped raining! Mostly. Northern Virginia had been pretty forgiving in terms of terrain, but this section included the Roller Coaster. It’s basically 13 miles of very up and down terrain. Most aren’t too steep or too long, but it was still a surprisingly rough day. 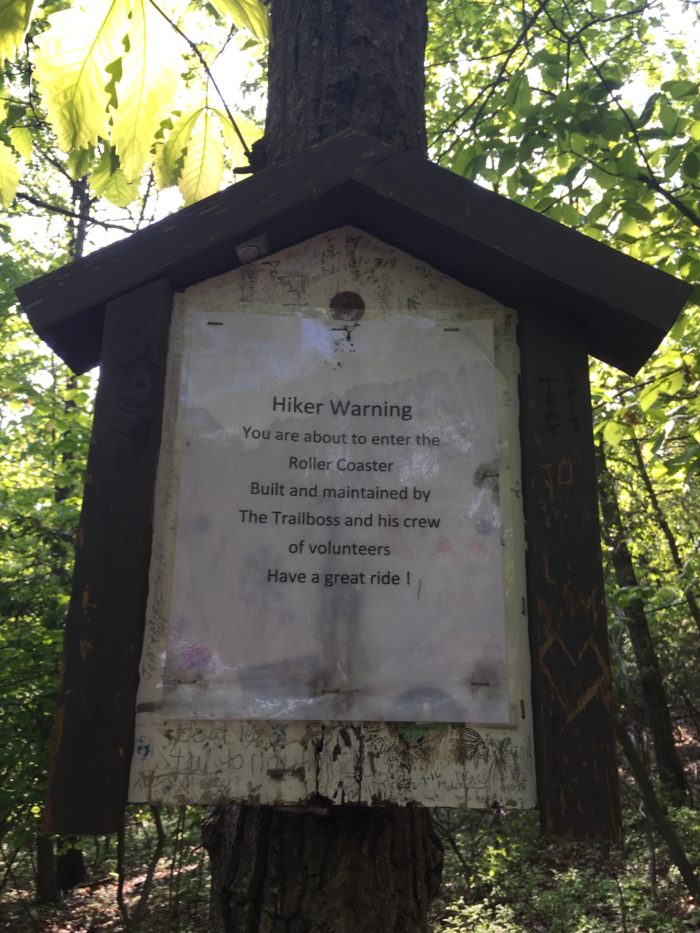 Genuinely one of my least favorite sections of trail.

It was a big milestone to get to the end of Virginia, and to cross the 1,000-mile mark. Virginia lasts forever, and you kind of feel like you’re not actually making much progress. Hitting 1,000 miles makes it seem like you’ve actually accomplished something, even if you still have over 1,000 miles to go. I think we were all ready for a change by the time we reached Harpers Ferry. 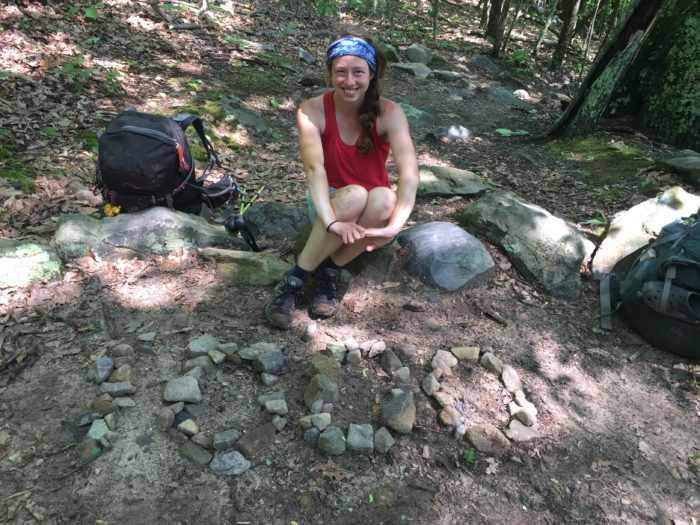 It was sunny and hot when we walked into Harpers Ferry. We had done the Roller Coaster the day before, and we were really ready for a shorter day and a stay with Squid Kid’s family, who lives in Maryland. I was the 289th northbound thru-hiker to come through the ATC headquarters this year (I was the 676th northbounder to start at Amicalola on March 5). It’s amazing to finally be (spiritually) halfway done with the trail, and kind of hard to believe. There’s still plenty of trail left, but it’s great to finally almost be in the north. 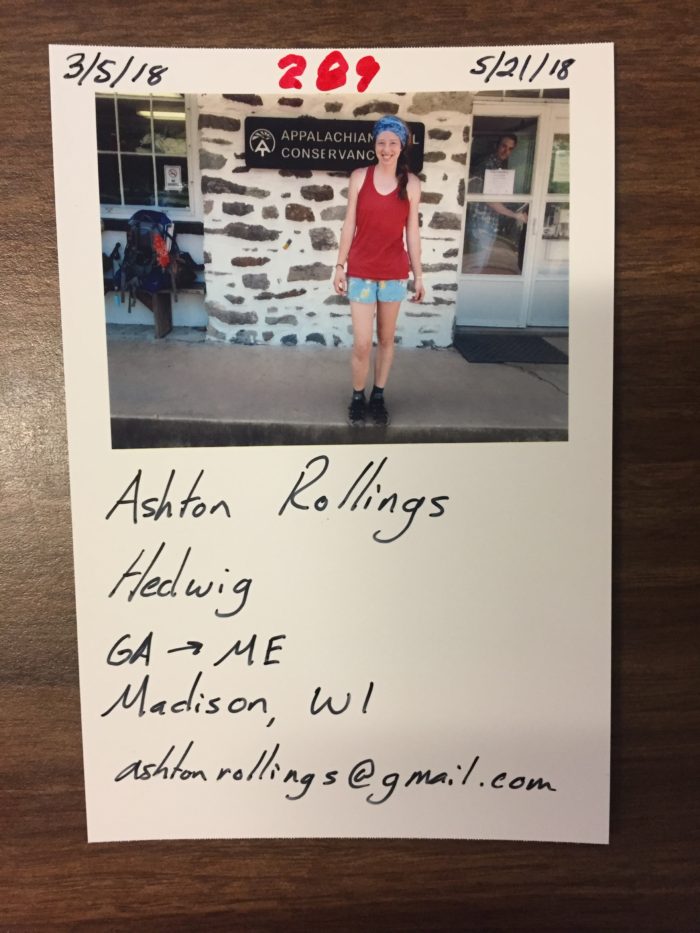